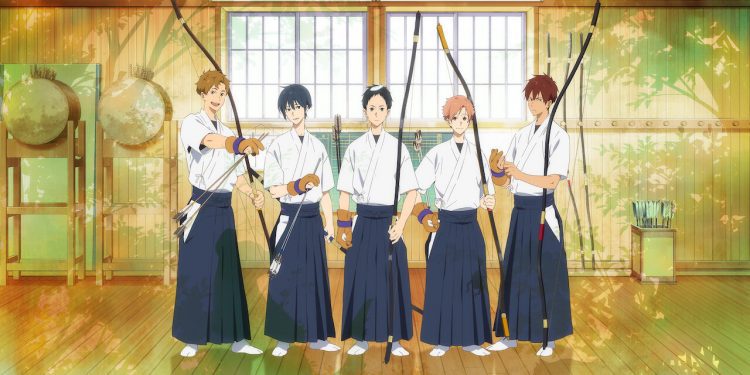 Where everyone is going nuts over the new announcements regarding Haikyuu!! another sports anime is going to get into highlight because of its recent releases. The series is none other than Tsurune that first appeared as a light novel series. Tusurne belongs to the genre of sports, mainly targeting the game of Archery. The novel series itself remained one of the best and was praised by the Special Judge Award during Kyoto Animation Award Competition in the year 2016. The concept of the series was unique because, unlike other series targeting badminton, volleyball, football, it targeted the game of Archery. Even though all the games are equally hard to play, Archery has some sort of elegance that has been clearly depicting the series.

The light novel series Tsurune was written by Kotoko Ayano and was illustrated by Chinatsu Morimoto. Unlike other novel series, the light novel series was not adapted into a manga but was directly made into an anime adaption. The anime series was produced by Kyoto Animation and was out with its first episode on 22 October 2018. The anime series concluded on 21 January 2019 with 13 episodes and an OVA series. Till then, fans are waiting for any announcements regarding the series, and finally, it is out, let’s see what it is.

ALSO READ: Top 10 Most Popular Anime Around The World In 2021

The production of the anime series Tsurune was helmed by Takyuya Yamamura, also known for his previous work in Violet Evergarde. The series composed Michio Yokote previously worked in The Great Jahy Will not be Defeated, the late Yasuhiro Takemoto who was the supervisor. Nobuaki Maruko as the chief animation director, previously worked in Miss Kobayashi’s Dragoon Maid and Miku Kadowaki as character designer. Both Nobuaki and Miku previously worked together in Miss Kobayashi’s Dragon Maid production. There are a lot of people who indulged in the production of the series, worked together to make this series successful. Other than them, all the voice actors together make the characters realistic and make fans connected to them.

The plot of the series centers around the life of a young boy named Minato Narumiya. During his time in middle school, Minato left his Kyodo club after a certain tournament and decided to quit Archery for good. Of course, he had his reasons but didn’t feel very good about this because him being very obsessed with the game. Later, when he entered High School, his old friends Seiya Takehaya and Ryohei Yamanouchi persuaded him to restart playing Archery. Initially, he refused to do so, but an encounter with a mysterious man at the archery range inspired him to make a move. Minato took up archery again, rejoining the Kyudo Club of the school. Now along with his old friends and new teammates, he is moving ahead to win upcoming tournaments.

Coming back to the main topic, a film of the anime series Tsurune has been announced. The series has already been ended, but just to keep the fire burning within the fans, the creators have announced the production of a movie. A trailer and a visual from the movie have been released, and fans are already getting excited over it. The visual shows Minato standing with a bow in his hand, surrounded by the flying petals of purple flowers. The visual gives very satisfying and soothing vibes that are also expected from the movie.

As for the trailer of the movie, it has been released on youtube available for everyone to watch. As Kyoto Animation is in charge of the production, the character designs will be very accurate and beautiful at the same time. The same has been depicted in the trailer, where all the main characters of the series have been shown. Minato and all the members of Kazemai High School Kyudo Club are the main attraction. As for the release date of the movie, according to the official announcements, the release of the movie has been set for the year 2022, but a particular date is still unknown. So we recommend you to stay tuned until any updates come regarding the subject matter.

The Calmness, the piece that you can expect from the game of Archery, has been depicted in the series. The picturization is good enough to take your mind to the piece, and no doubt, you will surely feel better after streaming it. The best thing about sports anime is that it centers around how players dedicate themselves to a game and work extremely hard to become better. This will not only entertain you but also give you an ample amount of inspiration to keep going.

As we are waiting for any news regarding the release of the movie, you can stream the anime series again. But if you are new to the fandom, you can start streaming it from the very beginning on Crunchyroll. The site is totally legit and provides you with all the episodes in high quality.