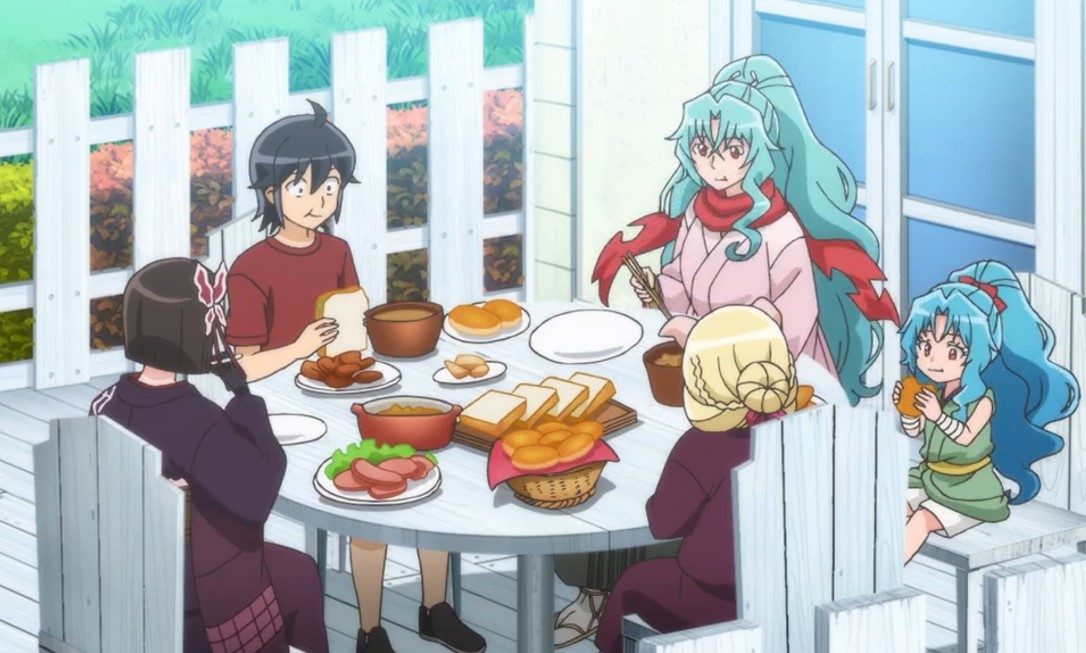 At Makoto’s temporary resident, he enjoys eating with his friend, and they talked about the warriors’ training. Emma told Makoto that her people had lost confidence in training with Makoto. Tomeo wonders if they are depressed since they can beat them. Emma agrees that her people are worried that they can surpass Makoto’s team since they lose. Mio suggests stopping taring with them for some time so they will regain confidence and match their level. Tomoe replies that they will think that they have abandoned them. Mio comments that she is thinking about dinner since she feels like she has become a housewife. Tomoe challenged her, and Mio asks if Topmeo is thinking about joining her for post-meal exercise.

Makoto continued to eat his food and told the two not to fight since they dust his food. He decided that he will check Emma’s people’s progress. Emily reveals that the Orcs are taking a break. Makoto asks Tomoe if she can talk to Lizardmen. Tomeo thinks that he is giving her a challenging task. Mio reminds Tomoe not to forget about the challenge. Tomoe suggests talking with Alke, and Makoto realizes that Alkes are strong and love to train since they are busy with medicine production and alchemy.

The episode title is ”Night Eight Demiplane Ranking.” Mikoto asks Mio to come with her, and Mio accepts. They traveled through the forest and heard three monsters talking about vegetation. Mikoto thinks that eavesdropping is not good; the monsters talked about the afternoon training and think it is depressing. One of the monsters comments that training with Tomoe and Mio is fine. But the young master blasts them before they even land a strike. Tomeo and Mio give them a chance to land a few shots. Makoto heard that and realized that they are talking about him and wonders if he is the warship.

The second guy wonders what the Lizardmen think since they never can watch other species train. Mio focuses on food when the trio travels while Makoto is thinking about what those guys were saying. The trio met with Tomoe on their way, and Makoto asks about Lizardmen. Tomoe reveals that their situation seems similar to the Orcs’, and they are less than ten percent stronger as she hoped. Makoto thinks that various species don’t share much information. Emma admits that and said they keep their tactics confidential.

Makoto thinks that it will be great if Lizardmen imitated Orc fighting style or Orcs used Lizardman fighting tactics. Tomoe asks Emma if her people can reach their level using their tactics. Makoto thinks that it will be better to improve them rather than hiding their tactics from each other. Tomoe summoned all the races and explained why they had called them. She asks one of each strongest species warrior to fight and demonstrate their strength. Mikoto realizes that she is talking about a one-on-one battle between each species representatives. The fight begins, and the monsters around like that since they are learning something new.

Where To Watch TSUKIMICHI-Moonlit Fantasy Episode 9?