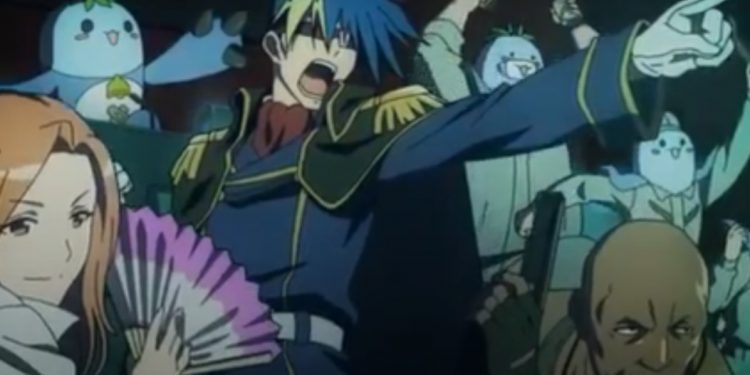 Rumble Garanndoll Episode 10 reveals the Captain of True Army entering Arahabaki. Captain Akatsuki received a report about the increasing rebel activities, and the boss reminded him about his mission. The boss reminds Akatsuki to eliminate the obstacle quickly. In the morning, Akatsuki gathers his fans and addresses his speech. But his minions wonder how a marathon wins the heart and minds of the citizens. In the latest episode of Rumble Garanndoll, Hayate believes that Akatsuki’s plan will work since the citizens will fall for his trick.

During the marathon, the rival crew arrives and outsmart Akatsuki, who lost. After the marathon, Akatsuki head to his secret room and talks with his boss. The boss notices that Akatsuki has lost the marathon, and the rival crew has won the hearts and minds of the citizens. Hayate pities Akatsuki after witnessing that the boss was scolding him. Balzac and his crew celebrate that they beat Akatsuki at the underground base. Misa and Yuki helped the team that made them win the marathon. Rin reveals that she has a lot of fans after running near Akatsuki.

Yuki explained how she worked hard for the marathon. She is surprised that Rin has become the center of attraction; Hosomichi told the girls that they had worked enough and decided to leave for the day. Rin wonders where Hosomichi sleep. Hosomichi reveals that he doesn’t care if he lies down and sees the next day. Misa thinks that they should build a room for Hosomichi. He left the room after saying that he would find a perfect place. Rin and Yuki went out and wondered if Hosomichi was like that. Munataka met with Hosomichi at the restroom and asked if he enjoyed being around.

Manataka gives Hosomichi money and tells him to keep on impressing those ladies. But he should not forget about his debt, and he doesn’t belong here. Hosomichi replies that he knows and decides to leave the room. The day of the event arrives the next day, and the Rebel Army of Arahabaki successfully advertised against the True Army. They also managed to retrieve all the items they had lost and restore the Akiba Dungeon.

Arahabaki has returned to its old days where citizens lived freely and shared equal freedom. Hayate and Akatsuki were disguised to investigate since they wanted to bring down the rival crew. Akatsuki reminds Hayate about the report he received from Hokumi and the number of rebels increasing. He gets angry and tears at the poster that the reveals have outsmarted him and won the land.

Hayate is glad that they infiltrated Arahabaki and Akatsuki reminds her about following the orders from the higher-ups. Akatsuki wants to unveil the true identity of Arahabaki since the reports he has are not enough. Hayate left the scene when Akatsuki was still explaining the details, but he didn’t see that since he looked in the opposite direction. Akatsuki turns around and notices that Hayate has left.

He realizes that Hayate has the habit of acting according to her will. Rin notices the girl that she knows during her guard duty. She wonders if it is the girl from the other side. But she got confused, thinking that it was cosplay, a high school ninja. Rin follows Hayate, but she is not aware that it is her. She asks her if she is new to Akiba. She decided to show her around, and Hosomichi met with Akatsuki at the Ramen store.

Rumble Garanndoll Episode 10 will be released on 13 December 2021. Akatsuki and Hosomichi talked about Arahabaki Garrandoll and the tragedy in the past. Akatsuki reveals what he has experienced during the war in the past. Hosomichi reveals why he is working in Arahabaki. Hosomichi finds that it is True Army, and they have invaded the city. Balzac finds that and realizes that they are traped. Let’s look at Rumble Garanndoll Episode 10 official details.

Also Read: Vampire Empress Joins The Human Festival In Episode 11 of The Vampire Dies in No Time.

Block B’s P.O As Control Z Appearing in Yumi’s Cells 2 To Make You Make In Love With Him