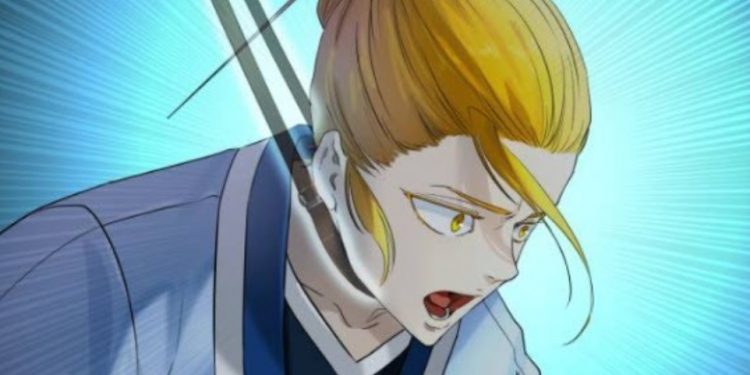 Tower Of God Chapter 526 reveals the Head of the Lo Po Bia Family: Lo Po Bia Traumerei. It happened after Kallavan vs. Lyborick. Traumerei asks the boy who came outside of the Tower. Meanwhile inside Control Room
Fish Tank, Hockney reveals that the players on the field have reached the destination. Voice announces that the survival game is finished since every player on the field reached the destination. Tower Of God’s latest chapter reveals the arrival of Traumerei. Crab was surprised to learn that the survival game had ended.

Voice also surprise the players after saying that the mouse catch game in the Cat Tower has also ended. The stage will be blown after thirty minutes since it is no use. Voice reveals about the super explosion bomb somewhere inside the Cat Tower. But the players can choose between finding the bomb or catching a mouse to escape. Elaine gets angry after realizing they were not told about that rule when the game began. Voice told that the game stage is their property, and they are free to do anything about it since the game is over.

Or, if they think that they are not getting better treatment, they can own the land. Elaine wanted to say something, and Voice revealed that the thirty-minute countdown had begun. Hockney realizes they have to escape and complete the mission to escape or be blown with the stage. Elaine accepts that they will find a bomb or mouse. Crab wonders what will happen to him. Hockney feels something coming towards them. Meanwhile, in front of the 2nd Wall, Sophia complains about something. Traumerei realizes that he spent many years without going out and feels too cold and bright.

Previously on Tower Of God Chapter 525

Yu Hansung wonders what magic Traumerei cast since she can’t see anything. She realizes that it is better that way since she would have been killed if she had looked at Tramerie’s eyes. Traumerei tells Owl to keep his head up, and Pudidy agrees since his lord refers to him. He asks Pududy about the Irregular, and Pudidy reveals that they have not captured the Irregular yet, but they will find him asap. Lyborick reveals that the Irregular is at the 3rd Wall inside the teleporter ship since he meets Princess Maschenny.

Kallavan wonders what is happening. Traumerei orders them to return with the Irregular since he is not interested in other weaklings and can kill them. Pudidy accepts that and tells Horse to remain since he and Holan will return with the Irregular. Perseus told him that it was fine, and Yu Hansung refused. Perseus asks her if she is talking to the lord in that tone. He told Yu Hansung to keep her mouth shut. Perseus uses  Special Skill: Rein of Seahorse against Yu Hansung, who struggles to breathe.

He warns her not to utter a single head, or he will cut her neck since the family head has allowed them to kill anyone. Yu Hansung tries to talk, and Traumerei tells Horse to send Yu Hansung to the main ship. Perseus agrees, and Traumerei tells him to kill the rest. Yu Hansung realizes that they will get annihilated if she doesn’t do anything. Meanwhile, at Baam’s side, Baam notices a circle, and Khun reveals that it is a spell circle. They realize that they can sense a spell. Khun believes that if Baam touches it would dispel. Vicente told them that it was a Seal circle.

Tower Of God Chapter 526 will be released on 16 January 2022. Baam believes that it is a thing that princess Maschenny told them to bring. Baam’s team tries to get that thing using the key to dispel the sealing circle. Vicente helped them solve the mystery. Pudidy notices a person at the entrance and realizes that its Ha Jinsung.  Let’s look at Tower Of God Chapter 526 official details.

Will The Students Find Their Happily Ever After in School 2021 Episode 16?