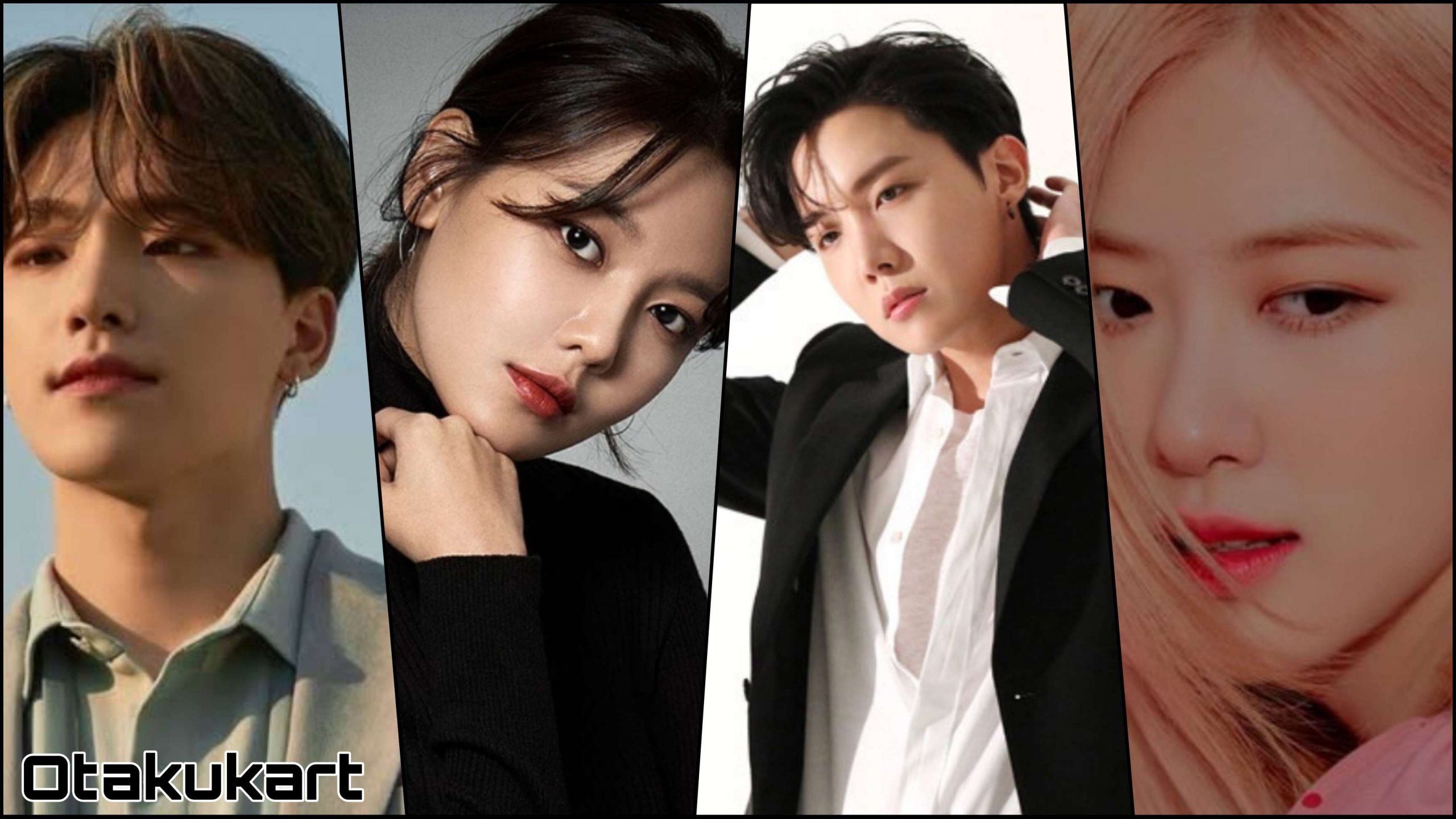 Happiest birthday in advance to our beautiful K-pop idols born in February! February might be the shortest month of the year with no major festivities for celebration. However, that doesn’t mean we don’t have reasons for celebration! Some of our most loved K-pop idols were born in the month of February to make it exceptionally special. And let’s be honest, some of us look forward to the birthdays of our favorite K-pop idols more than our own birthdays, and why not! It’s not every day that we see them come live on social media with a birthday cake in the middle of the night, conduct fan meetings and watch them perform!

In case you don’t want to miss out on the special days of your favorite idols, here is the list of the top twenty K-pop idols who have their birthdays in February. So our dedicated K-pop stans, mark your calendars for some of the hottest birthday parties of the year.

Born on the first day of February, Jihyo, the leader and vocalist of the K-pop girl group ‘Twice,’ is soon turning 25! She was born in Guri, Gyeonggi Province of South Korea, and at the tender age of eight, she joined JYP Entertainment as a trainee. Jihyo made her debut as a k-pop idol when she was 18, after almost ten years of hardcore training with Hyerim, Bae Suzy, Jo Kwon, Sunmi, and Nichkhun, who are currently some of the most well-known celebs at present. Admired by the fans for her soothing voice and jaw-dropping visuals, Jihyo expressed her sincere gratitude on V Live last year when her fans put up advertisements in order to promote her birthday.

A member of the most experimental girl groups of all time, f(x), Victoria will be turning 35 within a few days, and till this day, her beauty leaves people speechless. Despite entering the K-pop industry at a considerably older age, she proved her worth as an amazing dancer and fast learner.

The maknae of ‘Dreamcatcher,’ Gahyeon is going to turn 23 this year. Born in Seongnam, South Korea, she serves as the lead rapper and vocalist of the band that debuted in 2017 with their first single album ‘Nightmare’. She replaced Dami when DreamCatcher re-debuted with two new members, one of which is Gahyeon. As the youngest member of the group, this petite and adorable girl is often spoilt by her bandmates, who call her ‘the crying baby’.

After debuting as a member of the K-pop girl group IZ*ONE, formed on Mnet’s survival reality show Produce 48 in 2018, Minju is all set to focus on her acting career solely, as announced by her company Urban Works. She was born and raised in Seoul and graduated from the School of Performing Arts Seoul in 2020. She is one of those K-pop idols who have achieved success at an early age, both in her music career as well as her acting career. She has made an appearance in the 2019 movie ‘The Fault is Not Yours’ and 2018 K-drama ‘Tempted’.

The main vocalist, dancer, and rapper of the latest boy group under the Big Hit Entertainment, TXT, Taehyun made his debut after three years of training. The boy will be entering his 20s in a few weeks and continue to dominate fourth-generation K-pop music with his bandmates. TXT has released a total of three studio albums, The Dream Chapter: Magic, Still Dreaming, and the latest, The Chaos Chapter: Freeze, since their debut in 2019.

Also Read: 6 Kpop Groups Contracts Ending In 2022! Will They Disband?

Through the survival reality program Stray Kids, I.N secured himself a spot in the 8-member boy group of the same name as a vocalist. Born in Busan, South Korea, the maknae of the band, I.N debuted under JYP Entertainment in 2018 at the age of seventeen. He will be turning 21 in less than a month, and fans are very excited about it.

Naeun entered into the entertainment industry as a member of the girl group Apink under Cube Entertainment at the age of seventeen. After almost eleven years, she will be celebrating her 28th birthday as a well-established musician and actress. She took birth in the Gangnam district of Seoul, South Korea, in an affluent family with her mother being the director of an art museum. Although Naeun has left the agency Play M Entertainment, following the expiration of her contract with them, she has signed with YG Entertainment as an actress. Nevertheless, she is still a part of A-Pink.

Known as an all-rounder artist, Seulgi was born in the Gyeonggi-do district of South Korea. Seulgi made her official debut in the Korean entertainment industry as a member of one of the most successful girl groups, Red Velvet, and later became a part of the sub-units Irene and Seulgi and the supergroup, Got the Beat. Not only is she an established K-pop idol but also the ambassador of various popular brands, including Nike. She is considered the girl crush of many female fans because of her unique sensibility and style, along with her positive vibes, passion for her singing and dancing, and creativity.

A member of one of the most influential and successful girl K-pop groups, Girls’ Generation, the 31-year-old Sooyoung is also going to celebrate her birthday in February. She was born in Gyeonggi in South Korea to ridiculously rich parents but opted to make a career of her own in the music industry. She became a trainee under SM Entertainment and debuted with a member of the Japanese duo, Route 0. Years after the disbandment of it, she made her comeback with Girls’ Generation as a vocalist and songwriter. Sooyoung has been a part of various K-dramas, including ‘Tell Me What You Saw,’ ‘Run On’ (2021), and ‘I Married the Anti-fan’.

Also Read: Top 8 Celebrities Who are Friends with BTS’ V

After training for three years, Dino made his debut as the main dancer, rapper, and vocalist of the K-pop boy group, Seventeen. The maknae of the group, Dino, belongs to the performance unit and considers Michael Jackson as his idol. Coming from a family of performers, he has been interested in dancing since a young age. Fans admire him for his powerful dancing moves, which contrasts his cute and sweet personality off the stage.

The main vocalist and dancer of the worldwide famous South Korean girl group Blackpink, Rosé, is going to turn 25 this February! Born and brought up in Auckland, New Zealand, to Korean parents, Rosé is a carefree and sweet person who doesn’t let other people’s opinions sway her. Not only is she successful as a Blackpink member but also as a soloist. She made her solo debut in March 2021 with the single album R, which went on to become a commercial hit and topped various music charts.

Jisoo made her debut as a K-pop idol in 2014 when she was selected as a member of the K-pop girl group Lovelyz. This time, she will be celebrating her 28th birthday as a solo artist under Mystic Story. After the expiration of her contract with Woollim Entertainment in November 2021 and following the disbandment of the group, she has decided to pursue her solo career as an actress. She has starred in K-drama One Fine Week and its sequel in 2019 and 2020, respectively, in lead roles.

A musical theatre actress and a member of the South Korean girl group Davichi, Haeri has one of the most consistent vocals in the K-pop music industry. She has a big fan following in the country because of her exceptional high-pitched range and the ability to express emotions with her singing. By looking at her, you definitely can’t guess that she will be 37 in a few days!

BTS’ J-Hope will be celebrating his 28th birthday this year, and considering how much he is loved and adored by his fans, they might already have begun the fan projects and promotions exclusive for the ‘HobiDay’. The third member to join the band and become a part of the hyung line, J-Hope fills the spot of the lead dancer and rapper. Moreover, he is notable for his contribution in production and songwriting in the discography of BTS. With his cheerful and bubbly personality, he is admired by BTS ARMYs as the ‘sunshine’ of the group.

Jungwoo joined SM Entertainment through their weekly audition, and after three years of training, he debuted with the boy group NCT and later became a part of its sub-unit, NCT U and NCT 127. He serves as the main vocalist and lead dancer of NCT U and NCT 127 and is probably the most affectionate member of the group. Together with his NCT fellow members, he has produced three Korean studio albums, NCT 2018 Empathy, NCT 2020 Resonance, and the latest, Universe.

Born in the capital city of South Korea, Wendy comes from a family passionate about music. She became a K-pop idol under SM Entertainment with the girl group Red Velvet which went on to produce three full-length albums and twelve extended plays. The 27-year-old singer made her official solo debut in April 2021 with the mixtape, Like Water. Moreover, she is a part of the supergroup, Got the Beat, which debuted earlier this month, along with her bandmate Seulgi.

The leader of the four-member girl group Mamamoo, Solar is going to be 31 years old in February. She made her debut as a K-pop artist in 2014 as a vocalist and songwriter under RBW, which made her career skyrocket to success. While maintaining her style and glam in check over the years, she made her solo debut in 2020 with the single, ‘Spit it Out’. Solar is widely known in South Korea for her eye-catching visuals, incredible vocals, and amazing pole dancing skills.

One of the most talented members of the six-member boy group Astro, Rocky made his debut in the K-pop industry in 2016 at the age of sixteen, right before his seventeenth birthday. He is not only a rapper, singer, songwriter, composer, dancer, and choreographer of the group but also a model and actor. Along with bandmate Jinjin, he also serves as a member of the group’s sub-unit, Jinjin & Rocky. He is just 22 years old presently but indeed works hard to present a variety of sides of him.

Renowned as a style icon by various worldwide publications, the K-pop rapper, singer, and songwriter CL is going to turn 31 soon. An influential figure in promoting South Korean music worldwide, CL rose to fame after debuting as a member of one of the most successful girl groups, 2NE1, in 2009.

Fans look forward to her for inspiration because of the energy and charisma she puts on stage, as well as her personality. Not to mention her will to experiment with her music style and performances, which makes her unique among the other idols. She is arguably regarded as the best rapper in South Korea.

Born in the capital city of Thailand to Thai-Chinese parents, Ten from NCT is soon turning 26 years old. After making his debut in the music industry in 2016, he has been active in South Korea and China as a member of the sub-unit NCT U and China-based unit WayV, respectively.

Moreover, he is a member of the supergroup, SuperM under SM Entertainment and Capitol Records, along with Taemin of Shinee, Taeyong, Mark of NCT 127, and Baekhyun and Kai of EXO.