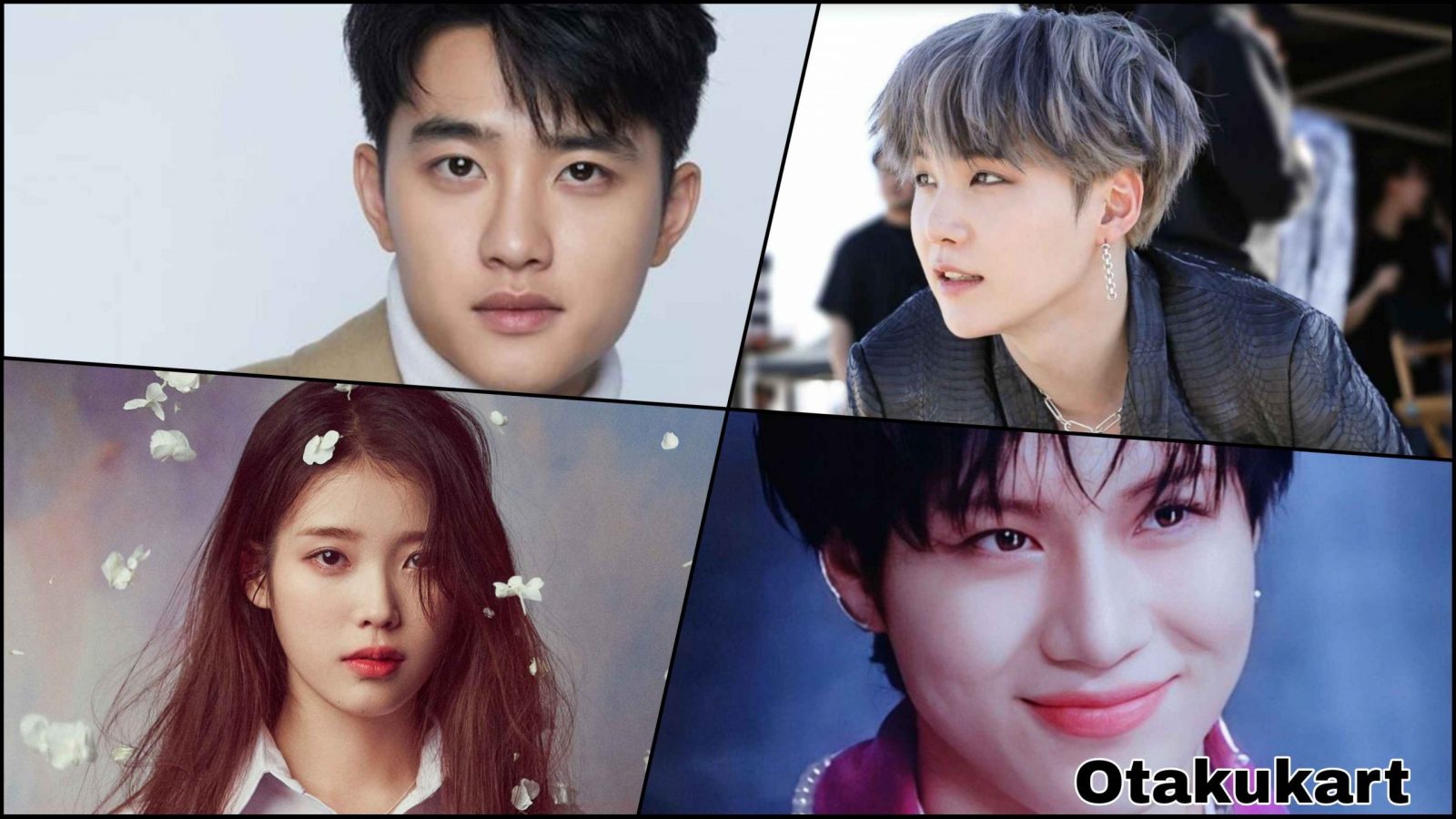 Finally, 2021 is going to end in a few days after letting all of us experience a crazy but maybe better year! The year definitely means a lot to us K-pop stans as the earth, at length, seems to acknowledge the power and uniqueness of the Korean pop culture. The world of K-pop is full of glam and fascination and we don’t blame you if you cannot seem to catch the real age of the K-pop idols. Some of them have remained in the industry for such a long time and have been so strong all this time without showing even a bit of ageing that we actually forget that they age like normal humans too! That might sound like a bit of a cliché to a few people but believe me, their doll-like appearances can completely fool you as many K-pop idols are turning 30 next year.

Here are some of the most popular K-pop idols who are turning 30 in the upcoming year, according to the Korean calendar. In case you get confused, the Korean age is always a year ahead of the international age. So the list includes idols born in 1993 who will celebrate their 30th birthday in 2022.

Look, who’s going to celebrate his 30th birthday at the very beginning of the year! D.O has been our favorite K-pop idol ever since 2012 when he debuted as a member of one of the most renowned K-pop bands, ‘EXO’. He is one of the main vocalists of the boy group and has even managed to deliver some of the best works as a supporting and lead actor in various K-dramas and K-movies!

This year, in July, he debuted as a solo artist as well, releasing his first extended play titled, ‘Empathy’ along with its lead single ‘Rose’. In the upcoming 2021 Mnet Asian Music Awards, which has been scheduled to take place on December 11, D.O has been nominated in the category of the best male artist.

Known for being the prankster of his group, P.O has worked hard to stand where he is now! He debuted in 2011 with the other seven members of the band, ‘Block B’, and later joined the sub-unit, ‘Bastarz’ in 2015. He began his solo career in 2017 with the single ‘Menz’ Night’ and amassed a lot of popularity with his reality TV programs. The maknae of Block B, Ji-hoon, loves composing and rapping and is even making his mark as a promising actor.

After the oldest member of BTS celebrated his 30th birthday with us earlier this month, our Lil Meow Meow is going to follow him next year in March. Although he mostly owes his fame as the cute little cat of BTS, he has been an active underground rapper even before his debut under the name Gloss. He has been arranging and composing music, rapping, and performing ever since he was seventeen and is the one who writes most of the lyrics for all of BTS’ album tracks.

He is immensely popular as Agust D, one of the fastest rappers in the K-pop world and has given us two solo mixtapes and several charted singles and collabs with other artists. Suga is extremely vocal about mental health and believes in equality for LGBTQ+ people. Although he is sluggish by nature, our Suga is the most active person when it comes to his passion for music!

Arguably the most versatile member of the K-pop boy band Winner, Mino is going to enter into his 30s soon. He entered into the music industry back in 2014 when he joined YG Entertainment and debuted through Mnet’s ‘WIN: Who Is Next’ along with three other members. Later, he became a part of the hip-hop duo MOBB with his label-mate Bobby in 2016.

Mino owes his recognition as a solo artist from the rap-survival program named ‘Show Me the Money 4’, where he emerged as a runner-up. His second album, ‘TAKE,’ has been appreciated by many critics and fans alike, which successfully sold over 110,000 copies within the very first week of its release! We are positive he will keep beaming with happiness in the future too!

After entering into the Korean music industry at the tender age of fourteen, it’s so proud to see that the ‘Nation’s Little Sister’ is going to turn 30, entering a new phase of her life the next year! Coming from a poor background, IU worked hard under LOEN Entertainment aka Kakao M to debut as a soloist in 2008 with her mini-album titled ‘Lost and Found’. She began to receive domestic fame after the release of her 2011 albums, namely, ‘Real+’ and ‘Last Fantasy,’ which gave her the girl-next-door image in South Korea.

Not only is she a wonderful singer but also a great lyricist and composer. She has proven her worth in the music industry several times with multiple number-one singles on Billboard K-pop Hot 100 chart and Gaon Music Charts. She has even delivered impressive performances in various Korean dramas, including ‘Dream High,’ ‘Hotel Del Luna’ and ‘Moon Lovers: Scarlet Heart Ryeo’.

Recently, the news has been all over the internet that Ji Ae has parted ways with her former agency and now is a solo artist under YGKPLUS after the group announced their disbandment. One of the best K-pop idols with a huge fan following, Ji Ae had initially debuted as a solo artist in 2013 and easily secured a position in the girl group ‘Lovelyz’ within a year.

She served as the lead vocalist and the visual of the group and has produced several impressive works with her other bandmates. Now that she’s entering a new stage in her life, we can definitely think of supporting her and wish her good luck!

Although Taemin is busy serving the country owing to his mandatory military enlistment, we hope he will get to enjoy his thirtieth birthday the next year! Upon debuting in 2008 at the age of fourteen as a member of the boy group, ‘SHINee,’ Taemin gradually cemented his existence in the heart of his fans and ultimately came to be known as the ‘Idol’s Idol’. Moreover, he is now a member of another SM Entertainment supergroup, namely ‘SuperM,’ the Avengers of K-Pop!

Not only is Taemin popular for being a part or two of the most known K-pop boy groups, but also known for his solo career, which has been equally astonishing. He has already delivered four studio albums to date— ‘Press It’ (2016), ‘Move’ (2017), Taemin (2018), and ‘Never Gonna Dance Again’ (2020), and we hope to get more in the future!

GOT7’s Mark is also going to join the list of K-pop idols turning 30 next year! Born in Los Angeles, U.S.A., Mark became a trainee under JYP Entertainment in August 2010 and debuted in 2014 with their first EP titled, ‘Got It?’ Moreover, Mark has made a huge influence in the fashion industry, working as a model in various magazines across South Korea, Thailand, and China.

Sadly, the group left JYP in January 2021, and all GOT7 members chose to go solo for the time being. Mark has recently released his new digital single, ‘Last Breath’ which is a liberating and addictive piece of work.

Next year, two of MONSTA X’s members are turning 30, and our beloved Minwoof happens to be one! Minhyuk was selected as the final member among seven others on the survival show ‘No. Mercy’ as a part of MONSTA X. The visual and sub-vocalist of the group, Minhyuk, has a very enthusiastic and outgoing personality. Often referred to as the sunshine member of the group, he is skilled in hosting several shows and has earned the title of the next-generation MC. He has made a great deal of contribution in the studio albums and EPs of the band, especially their sixth album, ‘All About Luv,’ in which he is a credited writer and composer.

The hamster of MONSTA X, Kihyun, is another one of the k-pop idols who will be turning 30 soon too! He is the main vocalist of the boy group, which made its debut in 2015 through Mnet’s K-pop survival show ‘No.Mercy’ under Starship Entertainment. He has been a part of various television reality shows, although we are yet to see him in any fictional character.

Other than his career as an active member of MONSTA X, Kihyun has sung several original soundtracks for K-dramas, including ‘I’ve Got A Feeling’ for the drama titled ‘Suspicious Partner,’ and ‘Love Virus’ for the 2018 show ‘What’s Wrong with Secretary Kim?’ along with WJSN’s SeolA.

Also Read: Seven Times the K-Pop Girl Group Aespa Blew Us Away With Their Talent