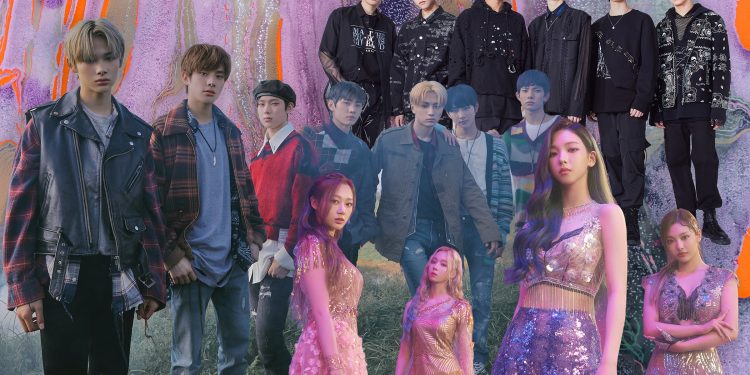 The year 2021 has finally come to an end, but the lists of achievements are endless. From the best debuts to comebacks, the wrap-up of the previous year is still going on. With all their hard work, idols, both old and new, are winning titles. There is something reserved for the idols who have just made their debuts. The ‘Monster Rookies’ are the idols who have been acing their game ever since the start. From album sales to streaming charts and the overall popularity. Combining everything from the talent of the idols and the PR of their agency, the ones who ace all the categories become the Monster Rookie. And just like every year, 2021 has had its share of the Monster Rookies in K-pop.

With the fourth-gen idols making their debut, all the eyes are on them now. In the previous year, around 45 groups have made their debut. Some went unheard while some were already competing with the senior idols. While some groups from the year before are still going strong. Till now, there have been a lot of Monster Rookies. Some are still going on, and some have disbanded already. Blackpink, Astro, SF9, Kard, Pentagon, and I.O.I remains some of the most memorable ones. Here is a look at the Top Monster Rookies of the year 2021.

Debuting under FNC Entertainment in October 2020, the six-member boy group made their debut with their EP Disharmony: Stand Out. The group consisting of Keeho, Jiung, Soul, Theo, Jongseob, and Intak entered the list of the monster rookies of 2021 with their comeback. Their April comeback ‘DISHARMONY: BREAK OUT’ sold more than 67.2k sales copies in total and 17,433 album copies on the first day. Breaking its own record, they also have 24.1 million views on all of their music videos. P1Harmony is doing great and has just made another comeback, completing their ‘DISHARMONY’ trilogy.

Making their debut in November 2020 under High Up Entertainment, STAYC is a six-member girl group. Consisting of Sumin, Sieun, Isa, Seeun, Yoon, and J, the girls made their debut with the single album ‘Star to a Young Culture’. While their debut album sales were above average than the other rookie groups. Their second album, ‘STAYDOM’ went on to sell more than 60k copies in the country alone. Their music videos have gotten over 2 mil views on 1thek, while the official channel count crosses the 10 million mark. Working with some well-known producers in the industry, STAYC has set the expectations high. And remains a good name on the list of the monster rookies of 2021.

Debuting under TOP Media in 2020, MNCD is a five-member boy group. Consisting of the members Castle J, Bic, Minjae, Huijun, and Win, the boys hold a good positing on the list of the monster rookies. Ever since they made their debut on February 27, 2020, MCND has sold over 101.7k copies of the records. While their music videos have a total of 103.8 million views and 3.74 million likes. ‘Earth Age’ remains their best-selling album yet, selling over 29.7k copies all over the world.

Continuing their story of being the monster rookies, TREASURE is a 12-member boy group from YG Entertainment. Winning the survival show “YG Treasure Box”, the boys made their debut on August 7, 2020, with “THE FIRST STEP: CHAPTER ONE”. The groups consist of Choi Hyun Suk, Jihoon, Yoshi, Junkyu, Mashiho, Yoon Jae Hyuk, Asahi, Bang Ye Dam, Doyoung, Haruto, Park Jeong Woo, and So Jung Hwan. TREASURE has everyone you can ask for, from the dancers who can rap, rappers who can sing, to singers who can rap and dance. Just after their debut, the group surpassed 100k sales in just 2 days. Their pre-release single Wayo by Bang Yedam charted in #1 on Melon and has 900k monthly listeners in Spotify. And the fans all over the world adore the boys’ relatable, hilarious and pleasant personalities.

After making their debut in the year 2020, ENHYPEN has become the ‘Fastest K-Pop Boy Group in History’ to reach 500 million streams on Spotify in a matter of a year. The boy group has also won the title of  ‘Fastest Debut Album by K-Pop group’. And to flaunt their global popularity, their song ‘Fever’ getting selected as ‘2021 Best K-Pop Song’ by TIME in the States is just enough. The seven-member boy groups consist of Jungwon, Heeseung, Jay, Jake, Sunghoon, Sunoo, and Ni-ki. The boys made their debut under Belift Lab, which is a joint venture between CJ ENM and Hybe Corporation. The boys are all set to make their comeback with the new year. Belift Lab has already released the tracklist for the upcoming album. And the fandom is all set to celebrate the comeback.

This might be their last year in K-pop’s rookie race, and till the end, Everglow still wears the title of the ‘monster rookies’ high on their head. Debuting in 2019 under Yuehua Entertainment, the 6 member girl group has released hits after hits. Consisting of Onda, Sihyeon, Yiren, Aisha, E:U, and Mia, Everglow has a global presence thanks to its music and powerful and edgy aesthetic. Their debut and comeback singles, ‘Bon Bon Chocolat’ and ‘Adios’ are known for their unique choreography and addictive melodies. It even debuted at number 2 on the Billboard World Digital Sales chartThey’ve been nominated for Asia Artist Awards, Genie Music Awards, Mnet Asian Music Awards, and even Seoul Music Awards. Their recent comeback ‘Pirate’ is not behind either as the fans are already going gaga over it all over the world.

As soon as their debut single ‘Black Mamba’ hit the streaming platforms, Aespa became a known name in the whole world. SM’s Aespa has no doubt been acing the rookie game in the K-pop industry. The girl group consisting of Karina, Giselle, Winter, and Ningning has even won the ‘Rookie of the year’ award. Not just that, Aespa is the only 4th gen group to have their single charting in South Korea. But they also went on to perform at Macy’s Thanksgiving parade making their international success. Their second comeback, “Next Level,” even hit 100million views in a month. Even now, their song is trending on Billboard’s weekly Hot Trending Songs.

Making their debut in March of 2021 under DSP Media, MIRAE entered the list of the monster rookies right away. The seven-member boy band consist of Khael, Park Siyoung, Lien, Jang Yubin, Lee Junhyuk, Son Dongpyo,  and Yoo Douhyun. The boys come from surviving the survival shows like ‘Produce X101’ and ‘Under Nineteen’. Making their comeback in August with the album ‘Splash’, everything from the fanbase to sales just grew more. This year they’ve sold over 80.1k albums copies of their albums. ‘Splash’ is their best-selling album, having sold over 49.9k sales. While all their music videos have gotten over 36.5 million views.

It has just been a month since their debut, and the girl group is already on an amazing start. Debuting on December 1, 2022, under Starship Entertainment, ‘IVE’ released it is first single, ‘ELEVEN’. And the beats have gotten everybody dancing and singing along all over the world. Consisting of Yujin, Gaeul, Rei, Wonyoung, Liz, and Leeseo, the girls have already won the very first music show trophy of their career. Within a week of their album release, it has sold a total of 152,229 copies. Along with bagging the tag of highest first-week sales of any artist to debut in 2021. The girls of IVE also became the idol group having the second-highest first-week sales of any girl group debut album in Hanteo history.