Even the raps, vocals, and dance moves of these divas are golden! 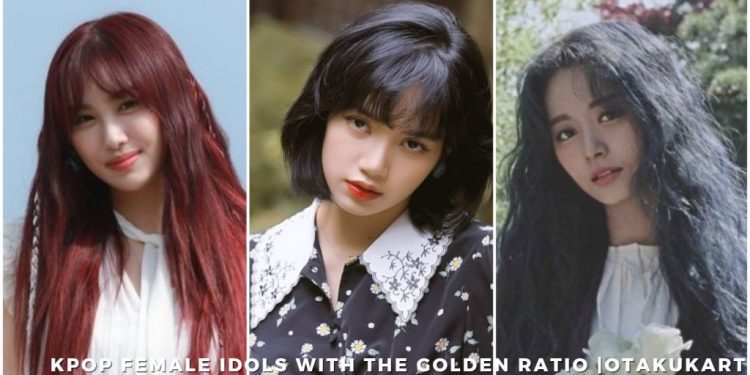 There are countless beautiful female kpop idols, but which of these have the golden ratio. What is the golden ratio, you say? A person has a golden ratio if their head fits into a ratio 0f 1:8 to their body. Basically, it is when someone’s face’s measurement fits their body’s measurement eight times. Phew, we didn’t know there was so much math in this! Moving on, the Korean industry has some of the most out-of-the-world pretty and amazingly talented people in the world. From dancing to rapping to singing, there is nothing that these female kpop idols can’t do. Just take a look at Blackpink’s Jisoo and Red Velvet’s Irene, then you will know why people say so.

Although all of the female kpop idols have outstanding visuals, we can’t disagree that everyone has their favorites. People also tend to be incredibly impressed when they hear that a person has the golden ratio. The word ‘golden’ adds a magical effect. Without further ado, in this article, we will be talking about female idols with the golden ratio and are as charming as the word.

This list of kpop female idols with the golden ratio starts off with none other than STAYC’s Yoon. Fans have been rightfully saying that Yoon might be one of the next best visuals of the Kpop industry. Her bangs, charming eyes, and overall, her whole face is just perfect! Where would you find such a perfect human being anywhere else! Her looks are similar to the likes of After School’s Jooyeon. Plus, she is 170 com tall, making her the tallest member of STAYC. Her absolutely fabulous visuals have earned her the nickname of Barbie Doll. In fact, we think that even in front of Yoon barbie is nothing! Fun fact: Yoon is her grandmother’s girl; even her favorite dish is a steamed egg which is specifically made by her grandmother, or else it is a no from her side.

Liz is one of the members of IVE that has the golden ratio. The second youngest of the six-membered girl group IVE, Liz has been taking over everyone’s heart quite easily with her innocent and soft visuals. Not only is she soft and cute from the outside, but her personality will also make you want to pinch her cheeks. Liz’s favorite artist is none other than the awesome queen ‘Taeyeon’. It makes sense because Liz is also a great vocalist herself. Fun fact: along with her personality and adorable facial features, Liz also has cute handwriting. We won’t be surprised by now if someone says that God had come up with the words cute and adorable just for IVE’s Liz. If you still don’t stan this girl and her group, you are basically living under a rock!

Also Read: Here Are Some Male K-pop Idols With The Golden Ratio!!!

Wonyoung is definitely one of the most popular female kpop idols right now. The teenage kpop idol rose to stardom when she won the survival show Produce 48. Also, IZ*One’s disbandment wasn’t the end of Wonyoung. She debuted once again with the kpop girl group IVE along with her former bandmate Yujin.

Currently, IVE has been eating up the Korean industry and is leaving no crumbs. Coming back to Wonyoung, this girl is insanely pretty and is very tall for her age. Honestly, she is only 17-years-old and is 173 cm long. It wouldn’t be surprising if someone would mistake her for a human-sized doll. Just look at her eyes and facial features and plump cheeks, and then you will say why we say so. Her visuals are also a lot similar to Blackipnk’s fashion queen Jennie. Wonyoung’s visuals will surely go down in history!

Bae Suzy is one of the most well-known visuals of the Korean industry. Over the years, she has been ruling over the acting industry as well as the kpop industry. Her visuals are so outstanding that after she starred in Architecture 101, she was termed as ‘Nation’s First Love’. Other than that, Suzy is literally a human Dior. Her elegant features earned her the role of the Dior’s Ambassador in Korea. Furthermore, none of us can deny while watching her kdramas; we can’t take our eyes off this beautiful kpop idol.

No one can argue that ITZY’s maknae Yuna was given the Visual position of the group for the perfect reasons. Yuna has soft yet sharp visuals that make her visuals even more unique. Her big doe eyes are the icing on the cake. Even though she started out as very cute and adorable during ITZY’s debut days (like every maknae in the history of kpop), last year, she came back with a bang with more mature visuals. Korean netizens have been praising her for her actress-like visuals. Plus, Yuna is a beauty with talents. Imagine doing ITZY’s Wannabe dance break, and you are a teenager, you would be super talented. Yuna was literally 15 years old when she debuted alongside the members of ITZY. Wow!

Everglow’s Aisha or Heo Yoorim is undoubtedly one of the prettiest female kpop idols ever, and the golden ratio adds an extra point to her unreal beauty. At first sight, you wouldn’t believe that she is a human being or she has not done plastic surgery. Well, it looks like God really has his favorites, and Everglow’s Aisha is one of them. Her most charming facial feature is her yees. Her eyes are very fierce-looking, which just adds the perfect touch while she is performing Everglow’s powerful songs. Not only is her visuals powerful, but she is also extremely powerful too. This girl can literally squash an apple with her hand. Maybe that is why people say female kpop idols are a force to be reckoned with!

Next up is the gorgeous maknae of Twice, Tzuyu! Not only is Tzuyu one of the most beautiful kpop female idols ever, but she also has the golden ratio! Her model-like proportions will make you hit the gym instantly. Ever since her debut with Twice, Cho Tzy-yu has been making everyone go crazy over her visuals. One of the most iconic visual moments of Tzuyu 2016’s ISAC, when her hair flipped smoothly when she shot an arrow that hit the bullseye straight. Seriously her cute and bright smile will make sure to brighten up your day. Plus, she had topped the list of the Most Beautiful Faces of the year 2019 by TC Candler.

Not only does she have a pretty face, but she also has a very fun and good personality too. Although people might term her as ‘intimidating,’ like all introverts, she comes out alive when she is surrounded by her friends and family or maybe when she is feeling herself!

There is no wonder why Lisa has topped this list. Not only does the kpop female idol have unreal boy proportions, but also has the golden ratio. Lisa has been collecting everyone’s heart with her cute and fierce facial expressions. She was also named the most beautiful face by TC Candler For 100 Most Beautiful Faces Of 2021.

Moreover, the change in her beauty with bangs and without bangs is absolutely fantastic (she looks absolutely stunning in both looks). With bangs, she looks like a real-like doll, and without bangs, Lalisa Manoban has a cooler and refreshing visual than the latter. Maybe, that is why countless luxury brands like Celine have made her their ambassador. Not only does this girl have the ‘it’ visuals, but she is also insanely talented. There is nothing that can stop this girl when she starts dancing. Lisa literally can learn hard choreographies in a matter of hours.

Also Read: Top 10 Most Beautiful Faces of 2021 on TC Candler

Bluey Season 3: When Will it Premiere in USA?