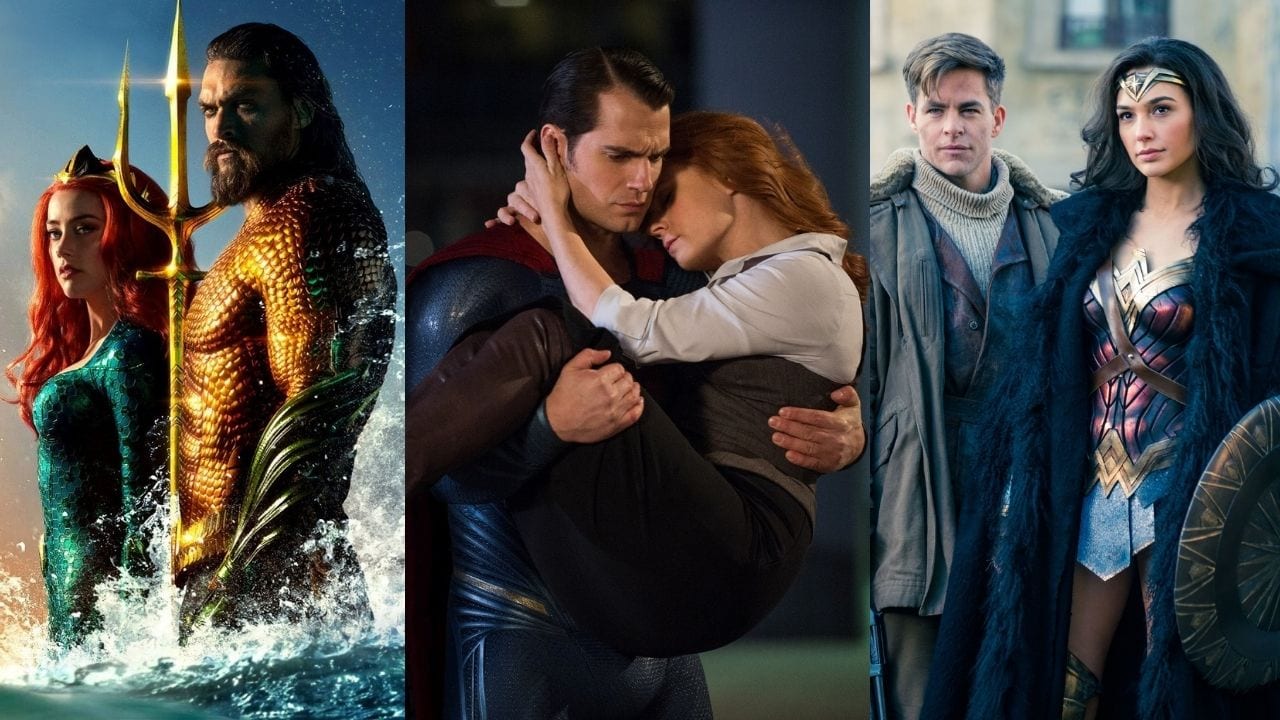 Throughout the years, we have seen many DC TV Shows and Movies al in front of our screens and Cinemas. While the franchise is based on superheroes, vigilantes, and crime fighters, we have seen multiple relationships in all of them. While most of them originate from the comics, others are specifically made for the show or movie. Nevertheless, these couple relationship dynamic only helps show more depth into each of these characters. While their actions often are driven by the feelings they have for their significant other. Some of these relationships grow stronger over time, others fizzle out soon, while some just make us question their existence. While the DCEU itself has only existed since 2012, we have several other TV shows and movies that have come before it. So here in this article, we will list out the Top 10 DC Couples From Movies & TV Shows.

DC Universe is home to some of the strongest and mightiest characters. While most of the story is filled with action, it has room for some more elements. And considering the number of characters that exist in DC, it is not a surprise that there are several couples. Each of these relationships is different from one another. While some of them stay strong due to the respect they have for another, others have the couples grow stronger as they face their adversaries. Many of these relationships have been seen within the comics, but the TV Shows and Movies provide us with an alternative to witness them once again. If you happen to not know which ones to look out for, this list is just for you. So, let’s begin our list of Top 10 DC Couples From Movies & TV Shows. 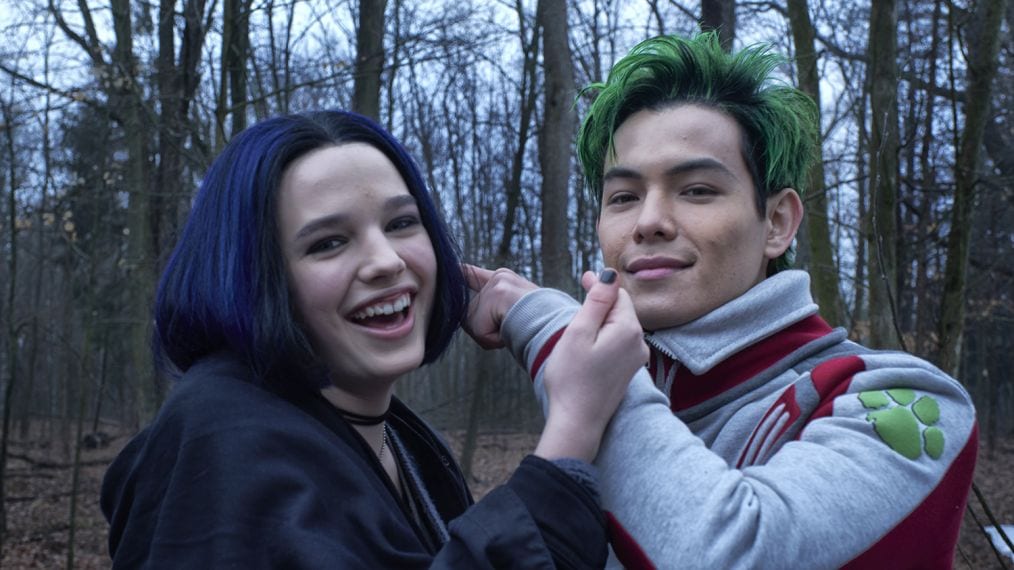 While Beast Boy and Raven have been shown as a form of a couple in Teen Titans and the comic books, the new Titans TV show has the couple catch our eye. In Titans, Rachel Roth, aka Raven is the daughter of Trigon and her human mother. So, trying to understand her lineage, she heads to find Dick Grayson. And as time passes, Kory Anders and Garfield Logan, aka Beast Boy join them, to form the new Titans. While being a teenager just like Rachel, Garfield tries to understand and protect her. The two have saved each other through the course of two seasons, just making their bond closer by every passing moment. On significant moment would be the couple enjoying a seemingly normal life in an arcade. 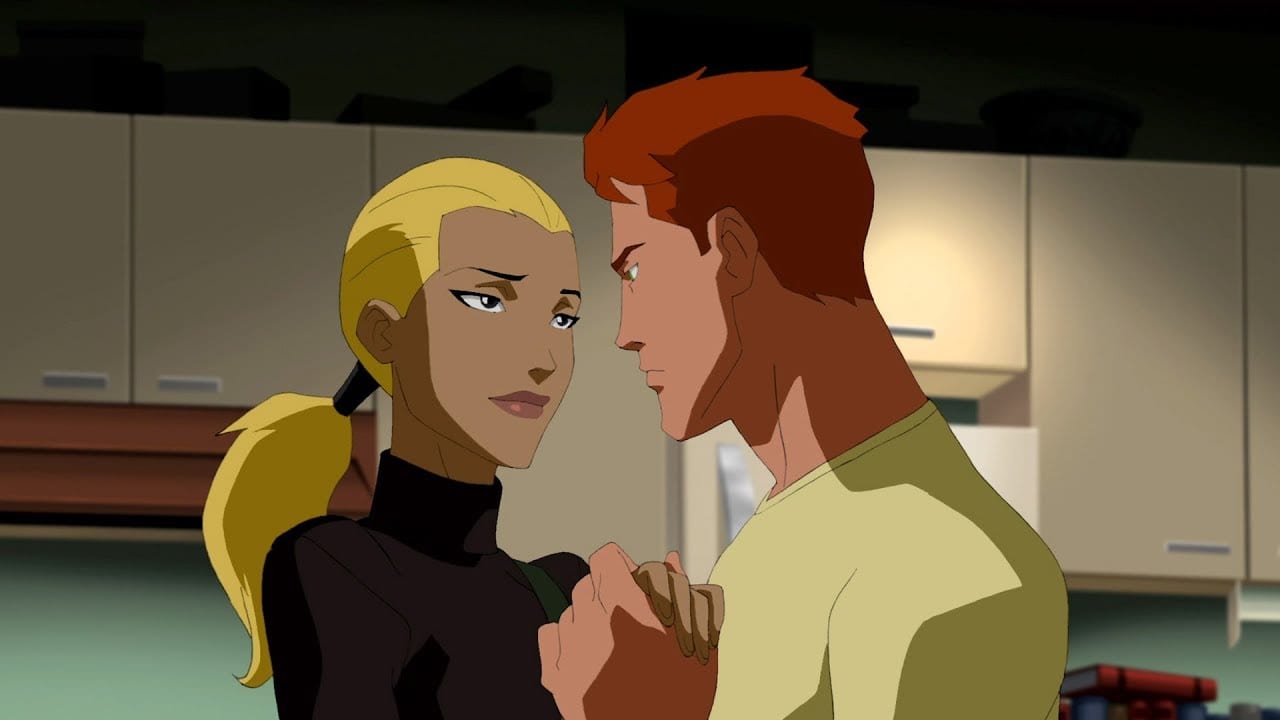 Young Justice is an animated TV show that focuses on the sidekicks of some of the most prominent members of the Justice League. While initially, the team is formed around Robin, Aqualad, Connor, and Kid Flash, they are later joined in by Miss Martian and Artemis. Kid Flash aka Wally West initially has a crush on Miss Martian but soon enough, he and Artemis develop feelings for one another. In the second season, we see that Artemis pretends to have died to go undercover as Tigress, but even so, the couple is still together. But soon enough, at the end of Season 2, Wally West dies trying to save the world. 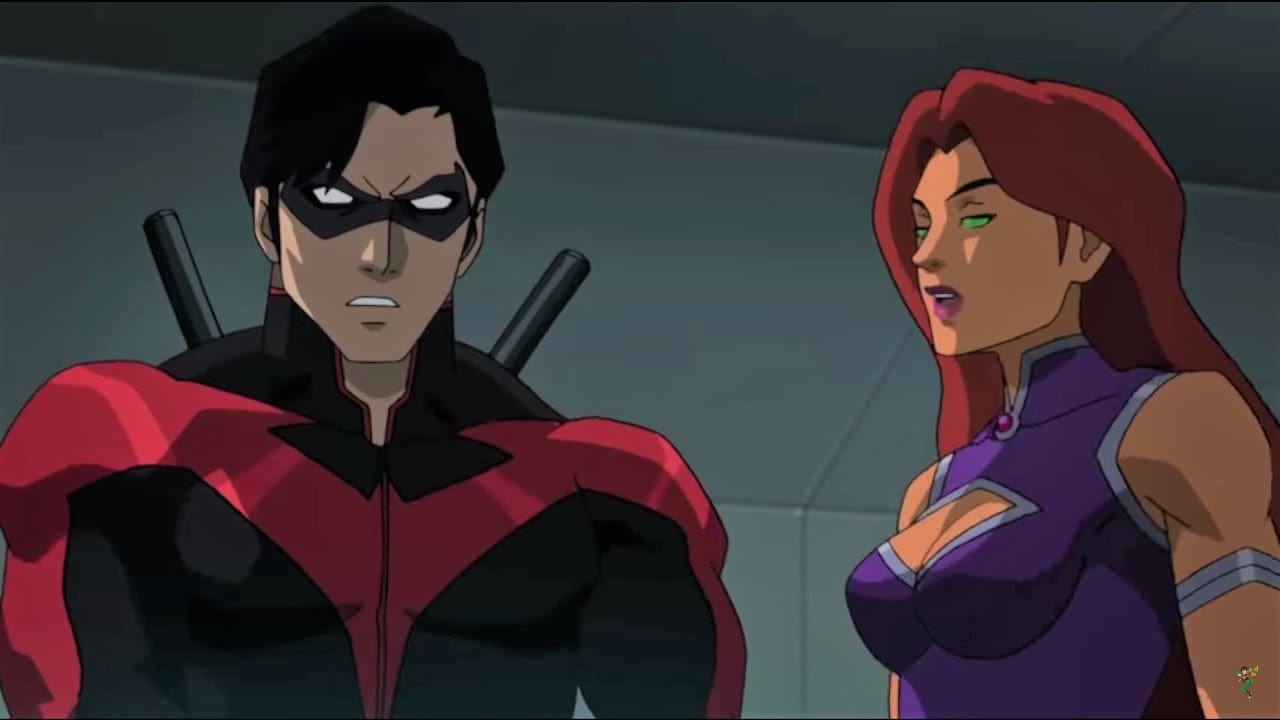 Batman’s sidekick, Dick Grayson has been in multiple relationships throughout the years, but one that has been ingrained close to our hearts is his relationship with Starfire. This could be prominently due to another animated show called Teen Titans. Nevertheless, in the recent past, we have seen this couple re-imagined in the DC Animated Movie Universe. We saw the two first meet in Teen Titans vs Justice League, where Starfire was being attacked only to be saved by Dick and the gang. Starfire kisses him as a token of gratitude, and from thereon their relationship became stronger. And by the end of the sequel movie, Teen Titans: The Judas Contract, Dick Grayson and Starfire have moved in together in an apartment. 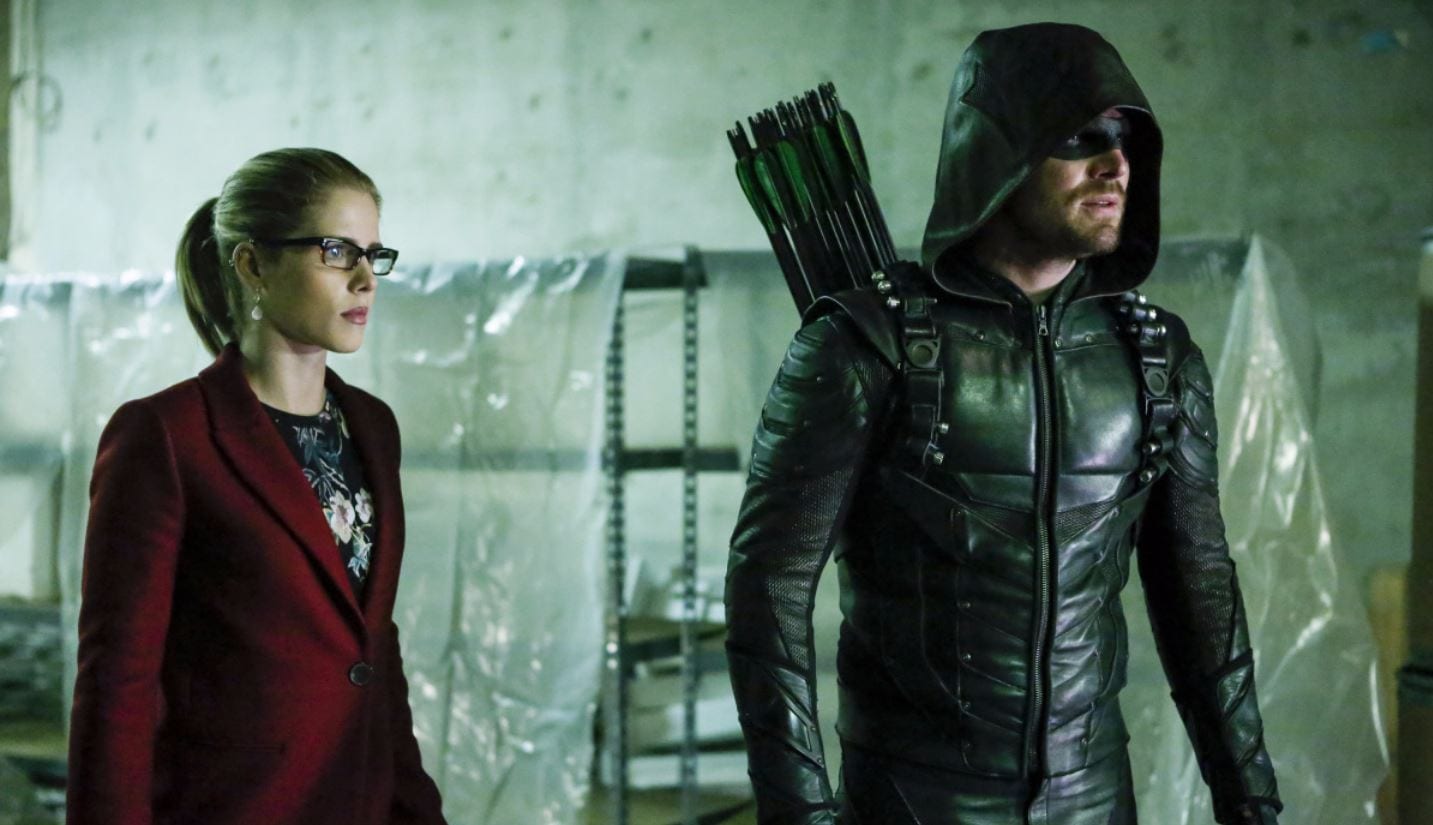 The Arrow is a CW TV show that initiates the Arrowverse within the DC Universe. Unlike the comic books where Oliver Queen, aka Green Arrow is in a relationship with Black Canary, the show has its own version for Oliver Queen’s love interest. In the show, Oliver Queen is with Felicity Smoak. This relationship has been a strong one, being there in majority of the series. Just like Oliver’s comic book antics with Black Canary, he here too proposes to Felicity multiple times. Out of the foyer times, she finally accepts once as they get married and even have a baby together.

Also Read: DCEU: Why Are There Two Versions Of Justice League Movie? 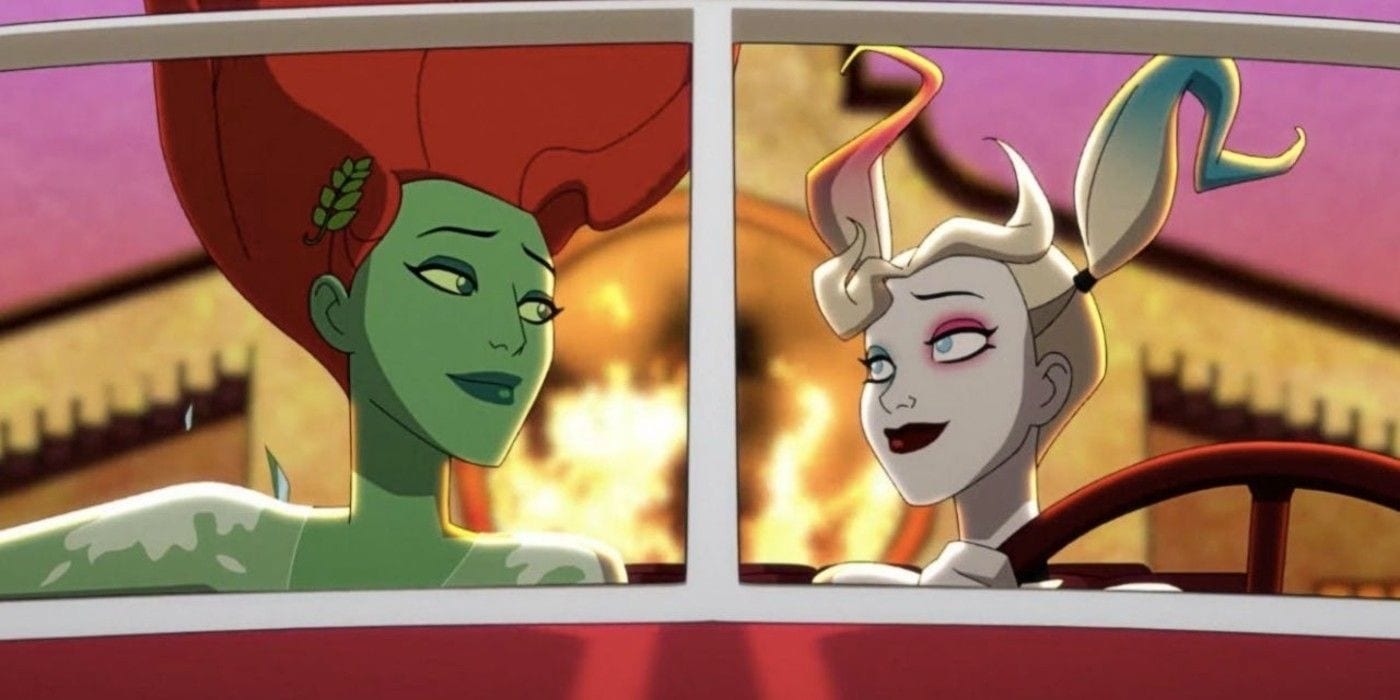 The new Harley Quinn TV series features the titular character realizing that her relationship with the Joker was toxic. And now we see her navigate her life in this new setting as she aims to be the next big thing in the Gotham underworld. But as she and her friends do their heists and take on their adversaries, we see a spark between Harleen Quinzel and Pamela Isley. But as Poison Ivy gets engaged to Kite Man, Harley is unable to navigate her feeling for her. Later, at Ivy’s bachelorette party, the two end up sleeping together. And by the end of the season, both of them are finally able to identify their feelings for one another as they drive away to their new life. 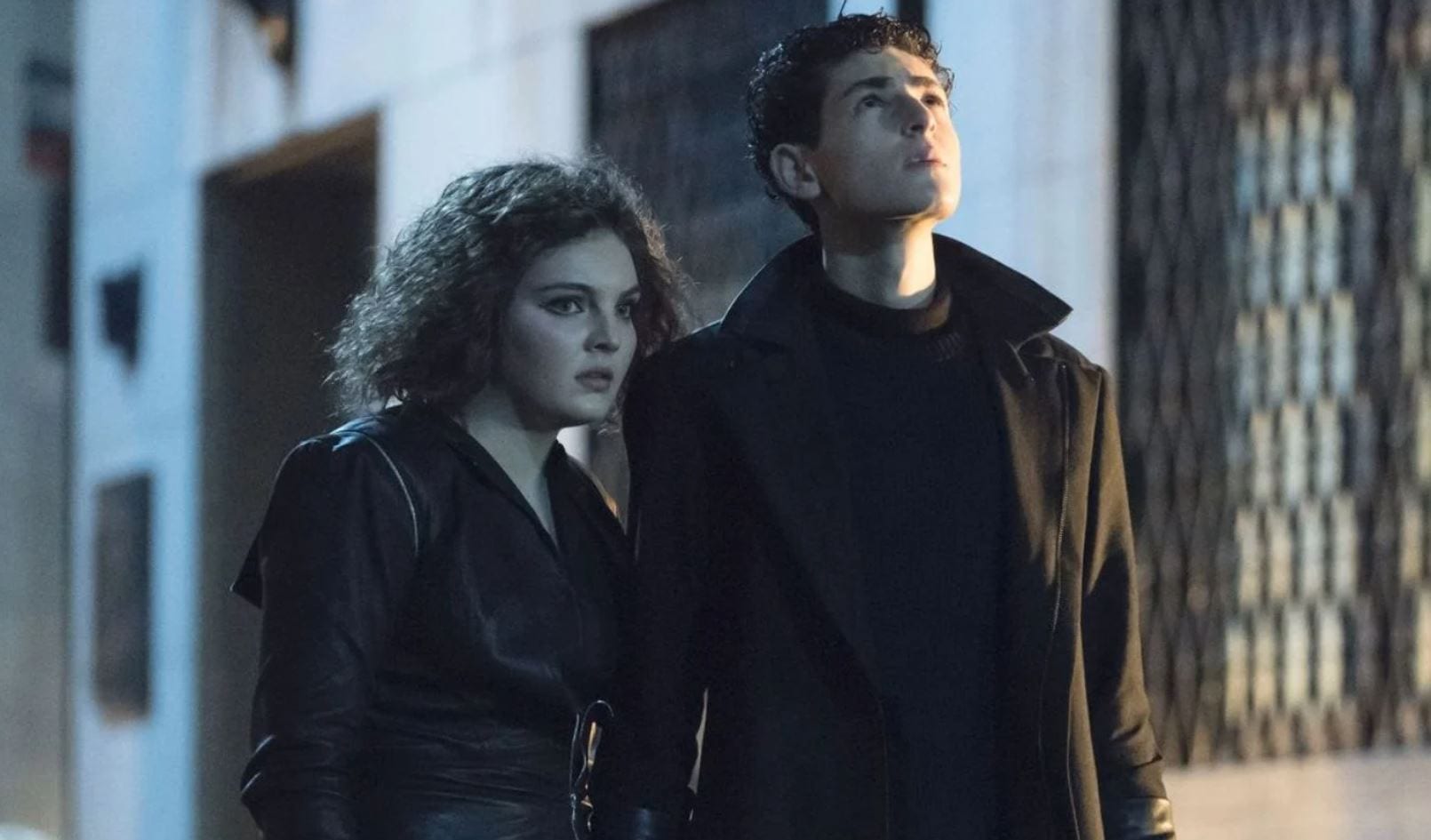 Much like Batman’s origin in the comic books, Bruce Wayne loses his parents in a stickup at the Crime Alley. But in this iteration, Wlina Kyle witnesses this event. Being a witness to the event, James Gordon has Bruce meet Selina. And over the course of five seasons, the two have an on-and-off relationship. But being driven by revenge, both of them stray away from each other. But the times they spent with one another is still one of the most enjoyable versions of Bruce Wayne in a relationship. 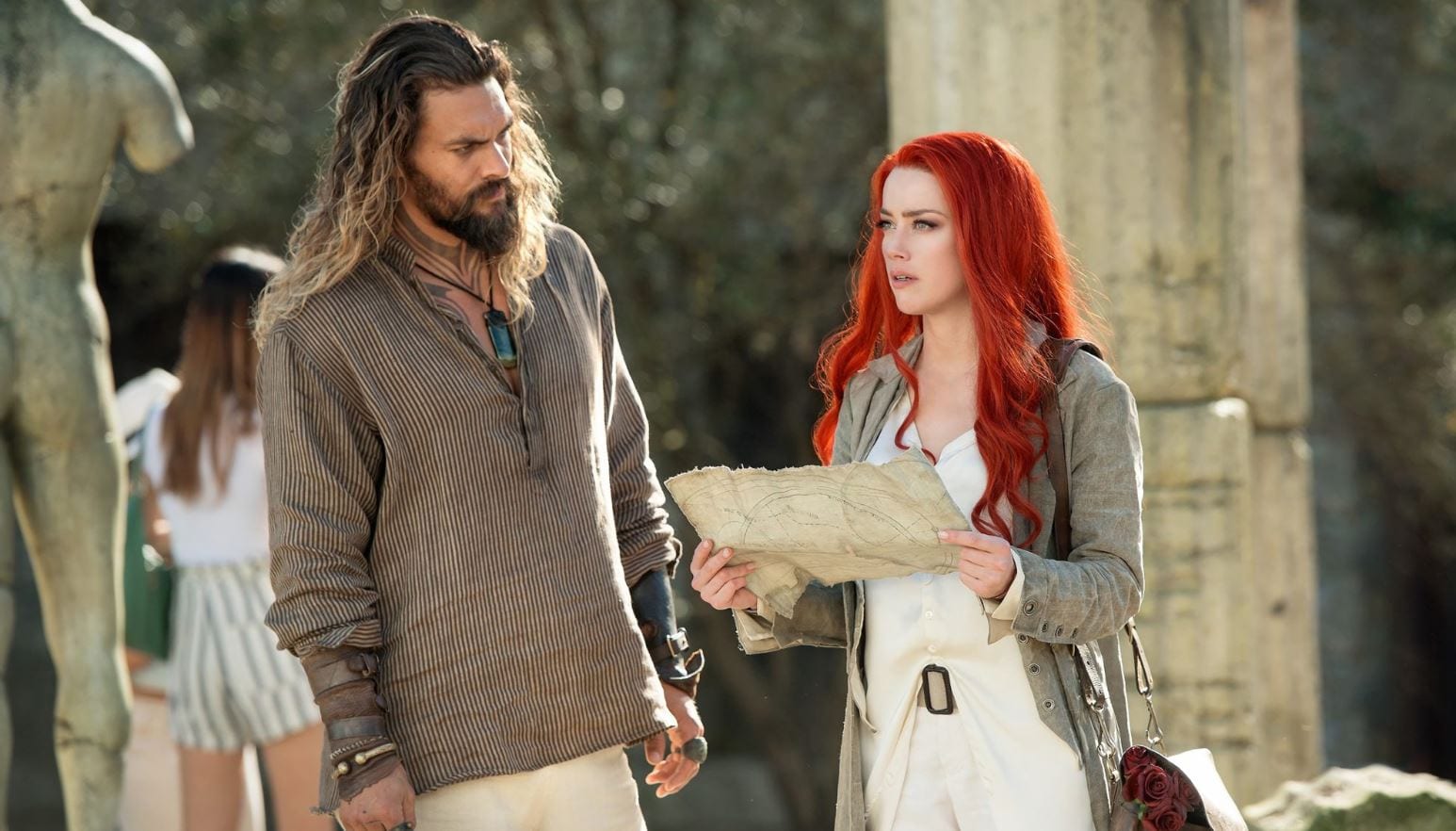 Mera, Daughter of King Nereus was raised in Atlantis by Atlanna. But as Orm tries to wage war against the surface dwellers, Mera heads to Arthur Curry for help. Arthur Curry was the son of Thomas Curry and Atlanna, making him an heir to the throne of Atlantis. And if he were to obtain the Trident of Atlan, he could challenge Orm for the throne. But having been sworn to marriage by her father to Orm, Mera is taken back to Atlantis, while Arthur obtains the trident. After which, he heads to challenge Orm thus becoming the rightful King of Atlantis. Arthur and Mera have a brief kiss which establishes a romantic relationship between them. 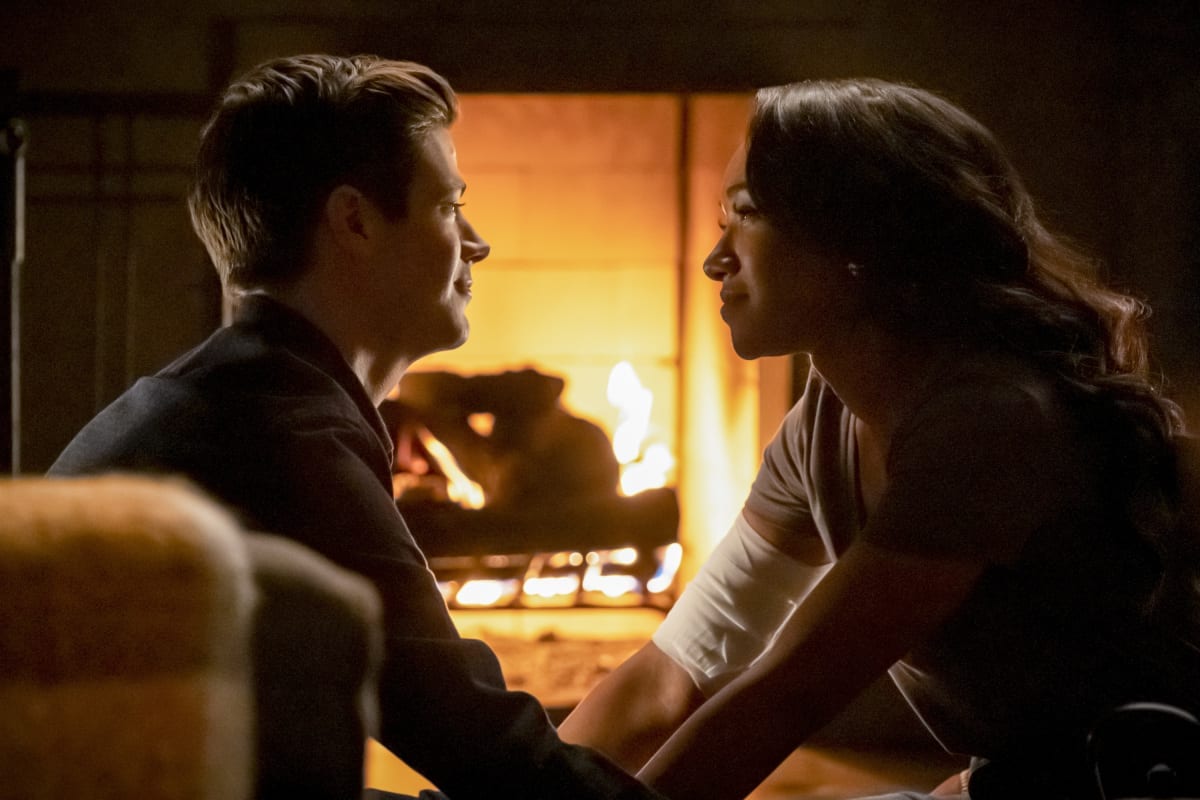 In The Flash, we see a direct adaptation of the comic book relationship between Barry Allen and Iris West. The show has portrayed the couple to be made for one another. Here, we see a friendship bloom into a relationship as the two grow closer over time. They face several obstacles throughout their journey even involving a variety of time traveling. And in one of the scenarios, Iris is killed by the creation of his actions, Savitar. But nevertheless, the couple ends up together as they get married and start living together. 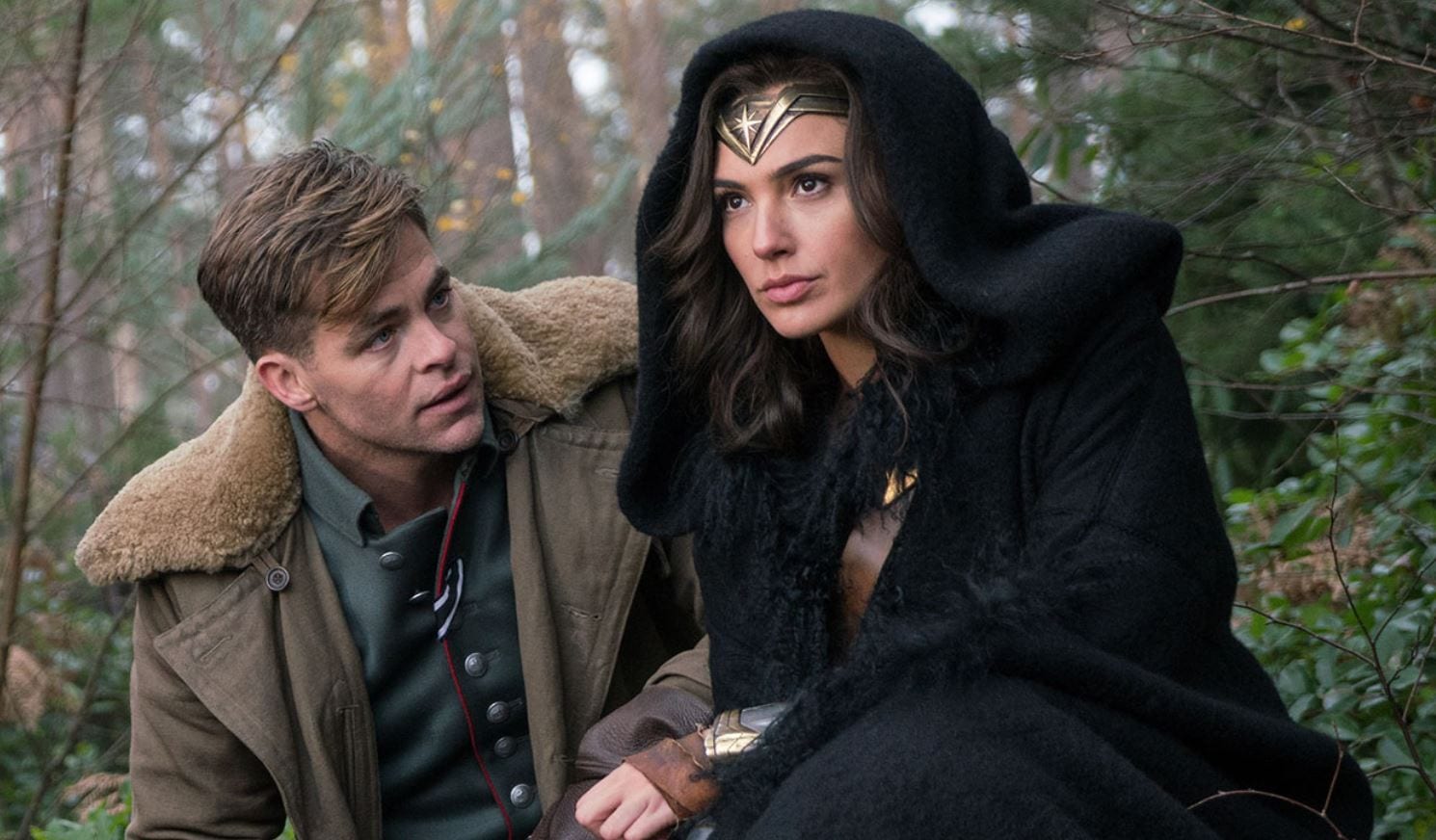 Steve Trevor is the first man Diana Prince ever sees in her life. He had floated to the shores of Amazon as he was battling in World War I. But thinking that the war was the work of Ares, Diana head with Steve to stop the war. During the course of time, the two grow closer together even falling for one another. But at the end of Wonder Woman, Steve Trevor passes away leaving the viewers with tears in their eyes. Nevertheless, Diana is again able to meet the love of her life in the sequel movie. Here the two get even more closer, but Diana has to let go of Steve in order to save the Earth. 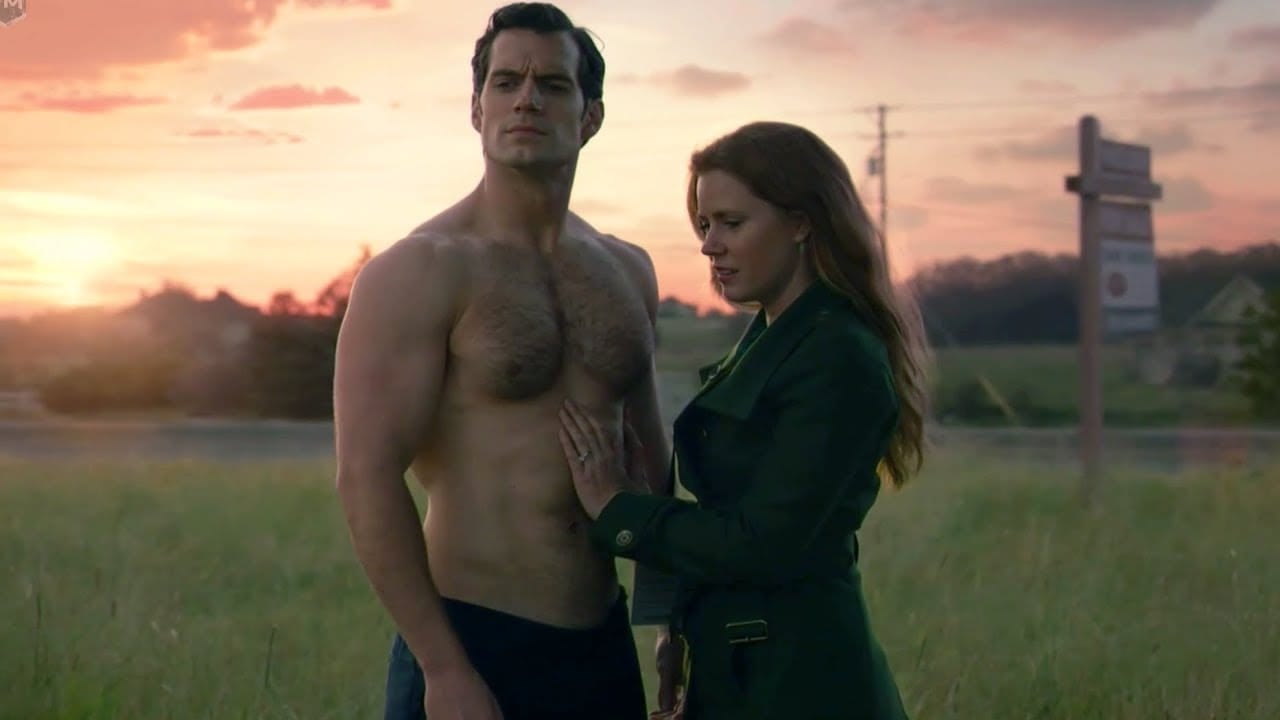 The relationship between Superman and Lois Lane has been depicted in several forms ranging in TV Shows and Movies. But the version of Henry Cavill and Amy Adams has to come at number 1 in the top 10 DC Couples from Movies & TV Shows. Originating back in the Man of Steel, this relationship has been able to remain strong. This could even be seen in Batman vs Superman: Dawn of Justice, where Lois comes to Superman’s aide. This leads to Superman teaming up with Batman to fae Doomsday. But at the end of the movie, Superman passes away. Even so, Lois is not able to let go of her past. Fortunately for her, Superman is revived back to life in the Justice League.