Top 10 Craziest Anime Fan Theories That Turned Out to Be True!

Here, we bring together some of the far-fetched fan theories on popular anime that turned out to be correct. 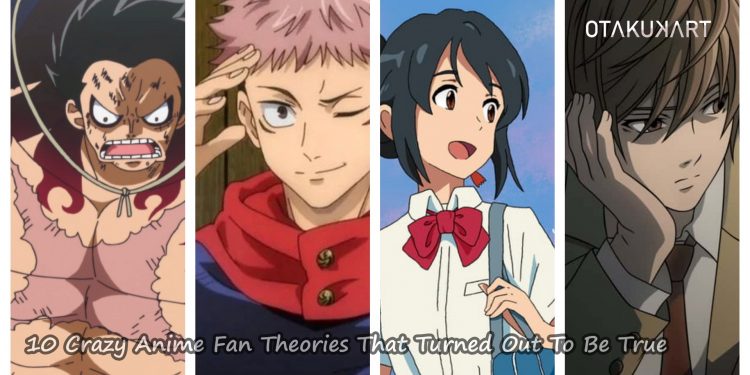 10 Anime Fan Theories That Turned out to be True

Do you know what the best part of watching anime is? Episodes are short, crisp, and mostly end with a cliffhanger that awakens the inquisitive child within us. The subtle sense of unpredictability and fans’ urge to know more about the anime often leads to crazy fan theories that often turn out to be true. There are times when we root for theories to go wrong as well. For instance, my heart skipped a beat when the majority of the fans predicted Naruto to die in the Boruto series. We can’t write off the possibility just yet either, but Kawaki being Naruto’s protector is a big relief.

Now, it’s always interesting to check if your theory matches the plot. You can’t help but feel like a pro fortune teller when the storyline turns out exactly how you predicted it to be. These are some of the popular fan theories that have proved themselves correct.

Anime Fan Theories that Turned out to be True

Over the years, we have come across a handful of theories that have proved themselves as far more than more speculations. For example, we knew Itachi wasn’t a villain, or Naruto would become the Hokage in the future. Even as I write this article in early 2022, I know Asta and Yuno will become the rulers of Clover and Spade Kingdoms, respectively, someday. Keeping such obvious theories aside, we are here to explore the ones that weren’t that popularly accepted till they got confirmed.

Jiraiya’s death is something that we fans can never get over. Thus, seeing Kashin Koji with uncanny similarities with Jiraiya, we couldn’t stop expecting him to be a new avatar of the Toadsage. Things got even more interesting when Kashin Koji pulled off techniques right from Jiraiya’s arsenal, including Rasengan and Toad summoning. If that’s not enough, Koji’s chakra didn’t trigger Konoha’s security system confirming that his chakra is familiar. This in turn ignited anime fans to come out with fan theories, which subsequently, turned out to be true.

Kashin Koji was initially a double agent who infiltrated Kara with the sole purpose of taking down Isshiki Otsutsuki. He lost his mask while fighting Jigen, and he looks exactly identical to young Jiraiya. Red eye-marks and a nose mole make it obvious that Koji has to be somewhat related to Jiraiya. Moreover, Chapter 47 of Boruto manga confirmed that Koji is an artificial clone of Jiraiya made by Amado.

Itadori consumed the Sukuna finger and stepped into the darkness of Jujutsu world of his free will, right? At least that’s what we thought till Kenjaku was introduced in the story. He is an evil sorcerer from the past who survived so long by shifting from one body to another. Right now, he is residing in the lifeless body of Suguru Geto. While in some of the flashback panels, we saw Itadori’s mother with stitches on her head, confirming her to be a Kenjaku vessel.

Thus, I believe that Kenjaku having a child with Itadori Jin (Yuji’s father) is another one of his attempts to create a human-curse hybrid. This ties everything up into a mysterious web. From Yuji’s superhuman strength to him becoming the perfect Sukuna vessel, everything was according to Kenjaku’s plan. Moreover, in the ongoing Culling games, Itadori was identified as a participant even before stepping into a barrier. He immediately infers that this happened due to the presence of Sukuna within him. Now, all the pre-registered are according to contracts made by Kenjaku, thereby confirming that Itadori consuming the cursed finger wasn’t a coincidence. Rather, it’s Kenjaku’s master plan to bring back the King of Curses and harness its powers through the perfect vessel he created.

3. Eren Goes Back In Time After His Death

The story of Eren Yeager started with him waking up to a terrible nightmare on a sunny day. Tears rolled through his cheeks, and the only thing he remembered was Mikasa’s short hair. Many fans were in the opinion that he witnessed the future events in that dream, but we didn’t pay much attention. However, we had to reconsider the theory since Eren died at the hands of Mikasa, and all the awful things that he dreamt of really happened to him.

It’s rightly said that everything in Attack on Titan is tied up in an endless time loop. The dream he saw that day was far more than any prophecy. In Chapter 138, we saw Eren dreaming of his childhood days in his final moments, where Mikasa said, “See you Later…” Interestingly enough, she heard the exact same words in his first dream, thereby confirming both the dreams are somehow connected. In simple words, Eren dies in the present to wake up in his past with all his memories lost, and the loop continues.

4. Eren Wanted to Lose the War

Ever since the Liberio attack, Eren’s action started making no sense. He stopped caring about human lives and went on to irradicate everyone outside the wall. This sounds insane, right? However, the Yeagerist fans defended their idol by claiming Eren’s actions to be a sacrificial move of reuniting the world by becoming a greater threat. Many predicted that Eren would willingly lose the fight when the time comes.

This biased theory eventually turns out to be true. For someone who had the powers of Founding Titan, there’s no way Eren could have been defeated. He could have turned every revolting Eldian into titans, but he didn’t. Deep down, he accepted his fate of dying in the hands of Mikasa.

Vegeta kept on saying that he would match up for Goku’s Ultra Instinct in his own way. Never for once did he try resorting to Angel’s signature move that involves autonomous body movements. Keeping the heart cool and calm is simply not Vegeta’s forte. He went on with his explosive training sessions where Beerus taught him the signature move for Hakaishins. In his recent fight against Granolah, he came up with a flashy transformation, Ultra Ego, based on the Hakai technique. This is something that fans have been speculating about for years.

6. Your Name and Weathering With You are Set on The Same World

Just from a glimpse of Weathering With You’s trailer, many fans were in the opinion that it is set in the same world as Your Name. However, the majority refused to believe it till Taki and Mitsuha made their cameos in the film, thereby confirming the theory. Makoto Shinkai is coming up with another film in Fall 2022, Suzume no Tojimari, and fans are expecting the film to be set in the same world again. Obviously, the plot won’t be related in any way. But the fact that that the films are set in a common world opens up the possibilities for familiar faces to show up.

Luffy’s Fourth Gear is like Goku’s Ultra Instinct. We all saw it coming ages before it actually came. It is undoubtedly Luffy’s greatest powerup that he ever received. It not only helped him to keep up with his enemy’s exponentially growing strength but also boosted his speed, stamina, and endurance to a huge extent. For years, Luffy just kept switching between Gear second and Gear third, but fans never gave up their hopes on seeing the fourth one. The wait was completely worth it since the powerup counts as one of the biggest One Piece moments of all time.

One of the many conditions of using the Death note states that the user will neither go to heaven nor to hell. That’s when the anime fans came up with fan theories that turned out to be true. It was given that Light would die by the end of the series, the question was, would he become a shinigami. Given the rules of death note, can you think of a place that isn’t heaven or hell or Earth? Yes, the Shinigami realm. Fans came up with theories that all the Shinigamis were once humans who tried exploiting the powers of Death note.

It was at the end of Death Note Relight where we saw an unnamed Shinigami with striking similarities with Light. He had a red tie around his forehead, just like Light’s high school uniform, along with a similar coat and messenger bag. The unnamed Shinigami tossed Ryuk an apple just like how Light used to give. Light must have lost his memories after getting reincarnated, and that’s why he was curious about Ryuk’s story (his own past). However, he didn’t wait till Ryuk completed his narration as if he already knew the end.

Blue eyes, unwavering will, and unrivaled incinerating powers, everything in Dabi hinted that he could be somehow related to the Todoroki family. We always had our doubts, but Chapter 252 of My Hero Academia confirmed that Dabi’s true identity is Toya Todoroki, Endeavor’s eldest son. Endeavor finds himself responsible for what happened to Toya, and he must have created the monster we see in Dabi. It all makes sense from the fact that Dabi holds a heavy grudge towards Endeavor and his family.

Yuga Aoyama turns out to be U.A’s Traitor

We all had our doubts over Yuga Aoyama but simply ignored the possibility just for him not having enough watch time. However, Chapter 336 of My Hero Academia shocked us by revealing that Aoyama was indeed the traitor who fed All for One every vital intel from U.A. The chapter also revealed that Aoyama was born without a quirk, but his parents resorted to All for one’s powers to implant a quirk into him. This explains why Aoyama’s naval beam had a damaging effect. It wasn’t Aoyama’s quirk, to begin with, so naturally, his body rejected it. Now, everything comes at a cost, and All for one forced him to infiltrate U.A as a payback. 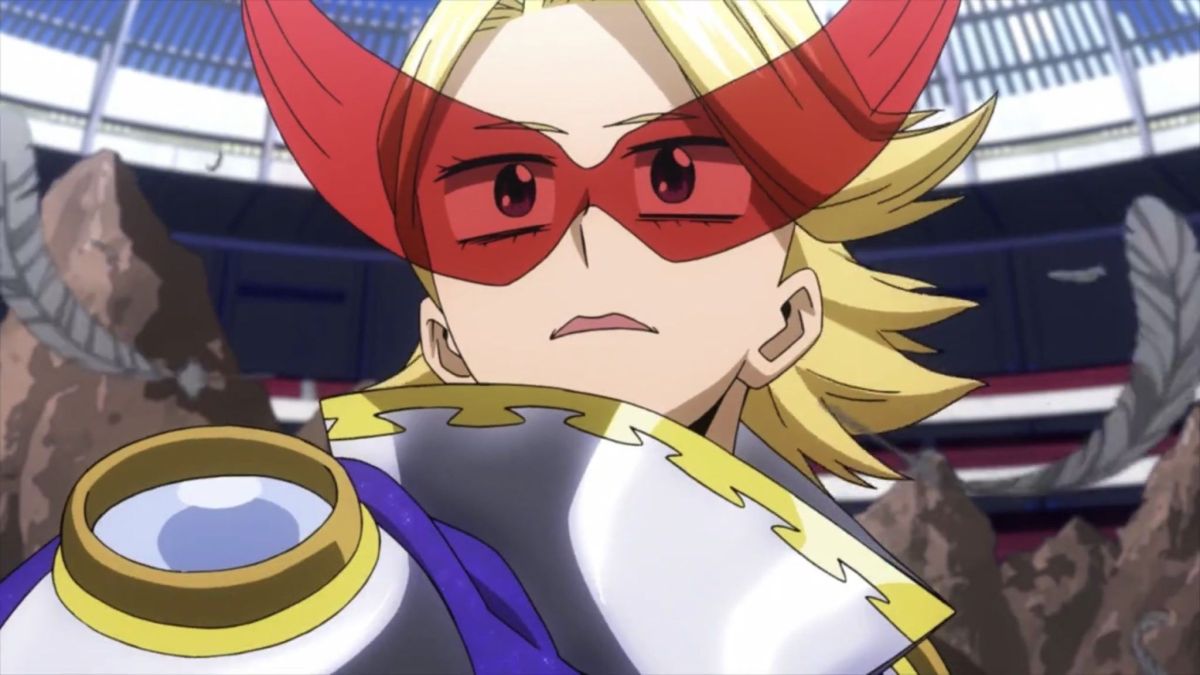 Also Read: Are Itadori and Choso Brothers For Real? Who is Their Common Parent?

Kpop Idols Born In January – Know About Them