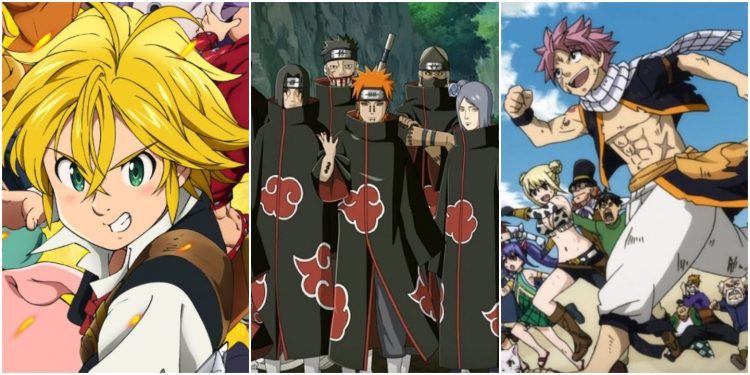 Every anime has its history, which defines the goal of characters. All the characters have enough reason to stand above all, but in reality, teamwork is the major factor behind this. Without teamwork, you can not be developed as a character. You have to become a part of a specific organization like the League of Villains, and after that, you will see a huge amount of changes in your personality, for example, Tomura Shigaraki.

It does not matter how strong you are or how weak you are. The only thing is a matter that, if you are part of a team then how will you develop yourself as an individual. Anime gives us a good amount of trustable teams, and we can consider them as the best teams, but without the factors of friendship, bonding, trust, interest, and planning, all these teams are worthless. So here is the list of the Top 10 Best Teams in the History of Anime and all these anime are valuable.

Stories describe the motive of the characters, and characters represent the goal behind their action. Every anime has a story that helps a character to develop their bonds with others. So, here are the Top 10 Best Teams in the History of Anime that make a positive and negative impact on their viewers. But, the plus point about all these teams is that they work together as a family.

The Z Fighters were weak when they began their journey as a team, but with time, each one of them became stronger and stronger. If we take the example of Goku and Vegeta, they both were weak and didn’t have that much power to beat Frieza. But with lots of training, they became stronger, and now they can easily beat Gods of Destruction. Their destructive power and trust in each other’s strength make them perfect for this list. As you can see, with the help of Z Fighters, excluding Frieza, who is originally not a member of Z Fighters, the Tournament of Power went well, and they are victorious.

Seven Deadly Sins is one of the best anime, which revolves around seven characters Meliodas, Ban, King, Escanor, Merlin, Gowther, and Diane. They are the strongest knights of Britannia, but in reality, they are seven deadly sins carriers. All because of their sins, they got an enormous amount of power that could help them to beat Gods. Seven Deadly Sins are one of the Top 10 Best Teams in the History of Anime.

Seven Deadly Sins is famous for the unique powers of its characters. All the characters have unique fighting styles and unbelievable power strength, which help them to fight against enemies. If we take an example, Escanor is the strongest knight, and he becomes unbeatable at noon. Even Meliodas in his strongest Demon form cannot beat him. They all are strong, but they become invincible when they work as a team. All the members support each other’s decision which is also an important point for them to make this list.

We all love Naruto, and as Naruto fans, we all care about the development of characters throughout the series. Naruto is a perfect example and has a good number of characters who are part of different teams. Akatsuki is a group of villains who wants to control all the Tailed Beasts, including Naruto’s Nine-Tails. Akatsuki is one of the Top 10 Best Teams in the History of Anime.

Akatsuki is one of the main villain groups in the Naruto series, and all the members of this group have enough power to kill Naruto and others. Their strength is one of the major factors to count them as the best teams. They don’t like working as a team, and this is one of their major disadvantage against opposing teams because they are unbeatable when they work together as a team.

How can we forget to include Team Urameshi from the anime series Yu Yu Hakusho? Even though Yu Yu Hakusho is 90s anime series, it still has a huge fanbase because of the story and characters. All the characters have different backgrounds, but they share the same goal, and they have to cross the limits of their power to achieve them. Team Urameshi is one of the Top 10 Best Teams in the History of Anime.

Team Urameshi has 4 main members, Yusuke Urameshi, Hiei, Kazuma Kuwabara, and Yoko Kurama. As a team leader, Yusuke has a responsibility to guide them, and the other three members like to follow Yusuke’s command. They all are strong in their way and have the power to become the strongest team. All four characters have different fighting styles, but they like to work as a team more than individually. They have enough power to fight against the Demon King.

Straw Hat Pirates has other names, too, like Mugiwara Pirates and Straw Hat Crew. They were not so popular when they came together as a team. Now, they are one of the most famous teams in the world of One Piece. Straw Hat Pirates members have powers that are not easily measurable. All the members belong to different regions, but they share the same dream. Their actions always come as a team because they don’t believe in individuality.

Fairy Tail is a story of its protagonist Natsu who begins his journey as a single hero but ends his journey as a team leader of Team Natsu. It is a group of mages who have mastered different fighting abilities, and individually, it is difficult to control them. Just think, what will happen if they fight together as a team? Yeah, correct. They can even beat the most powerful dragons in Fairy Tail. Because of that, Team Natsu is one of the Top 10 Best Teams in the History of Anime.

The plus point about Team Natsu is that they are already aware of the fact that the power around their body is not measurable. They have enough powers that are useful against strong enemies, but still, they believe in teamwork. Team Natsu is still together because they believe in the Power of Friendship, and this helps them to rise as one of the strongest teams around the world. Their limitless strength against enemies and support from team members are major factors that allow them truly for best teams.

Black Clover is an anime that is based on mages that reside in the Clover Kingdom. So, to protect the kingdom, there are nine factions that are formed. Out of these, Black Bulls is a team of members who are the lowest of the lowest in society. They are the outcasts who have weird magic abilities, are peasants, or are even criminals. While each member in the brigade is strong in their own way, the team members have joined forces together on numerous occasions to take down foes. Thus Black Bulls is one of the Top 10 Best Teams in the History of Anime.

Black Cover is an anime that revolves around the journey of Asta and Yuno, who aim to become the Magic Emperor. As a member of Black Bulls, Asta and other members like to work together as a team against all the enemies. Every member has a specialty, which makes them unbeatable. Their first instance where the whole crew fought together was against Vetto, of the Eye of the Midnight Sun.

How can we forget about Phantom Troupe? We know that every anime has similarities and dissimilarities from each other. But Hunter x Hunter is an exception because of groups of powerful members. The story describes the intentions of each character, and this same concept is followed by the members of Phantom Troupe. Phantom Troupe is one of the Top 10 Best Teams in the History of Anime.

Phantom Troupe is a group of thieves who are known for their negative actions. This group is full of villains, and each member has a hidden background. Their bond is unbreakable, and this is all because of Chrollo Lucifer. As a team leader, Lucifer knows how to control them even when they are uncontrollable. The plus point about Phantom Troupe is that they already know how to work as a team. Their way of working is one of the best parts of the anime series Hunter x Hunter.

Now, it’s time for one of the best anime series of all time, Gintama. Gintama has everything as we anime fans demand. Unstoppable plots, hilarious characters, unbeatable comedy, senseless romance, and purity in the relationship, but it does not look like that. Gintama is a story that revolves around Gintoki Sakata, who is the leader of Odd Jobs. Odd Jobs was started by Gintoki himself, and the other members of this group are Kagura and Shinpachi Shimura.

All the other teams have serious motives in life, but in the case of Odd Jobs, they are hopeless people who do not care about seriousness in life. They will do any type of job that pays them a good amount of money. Gintoki Sakata, Shinpachi Shimura, and Kagura work together as a team whenever they get a job. These 3 are individual personalities, and their way of working is exactly opposite from each other, but still, they like to take a job as Odd Jobs.

My Hero Academia is one of the best anime series of all time, not because of the story but because of the deep struggle caused by the characters. League of Villains is known for its negative motives. It is a group of villains who just want to kill every single hero from society. League of Villains/The Paranormal Liberation Front is one of the Top 10 Best Teams in the History of Anime.

League of Villains have potential, but they lacked support from others, and because of this, they failed in every mission. As a team leader, Tomura Shigaraki decided to train himself and after his fight with Re-Destro, who was the leader of the Meta Liberation Army. He became the strongest villain, and this is all because of his team members. League of Villains always works according to Tomura’s plans. After merging League of Villains and Meta Liberation Army, a new face has revolved around as The Paranormal Liberation Front. Now, they are almost unbeatable and have full support from other villains. They have enough power to kill all the heroes without any problem.