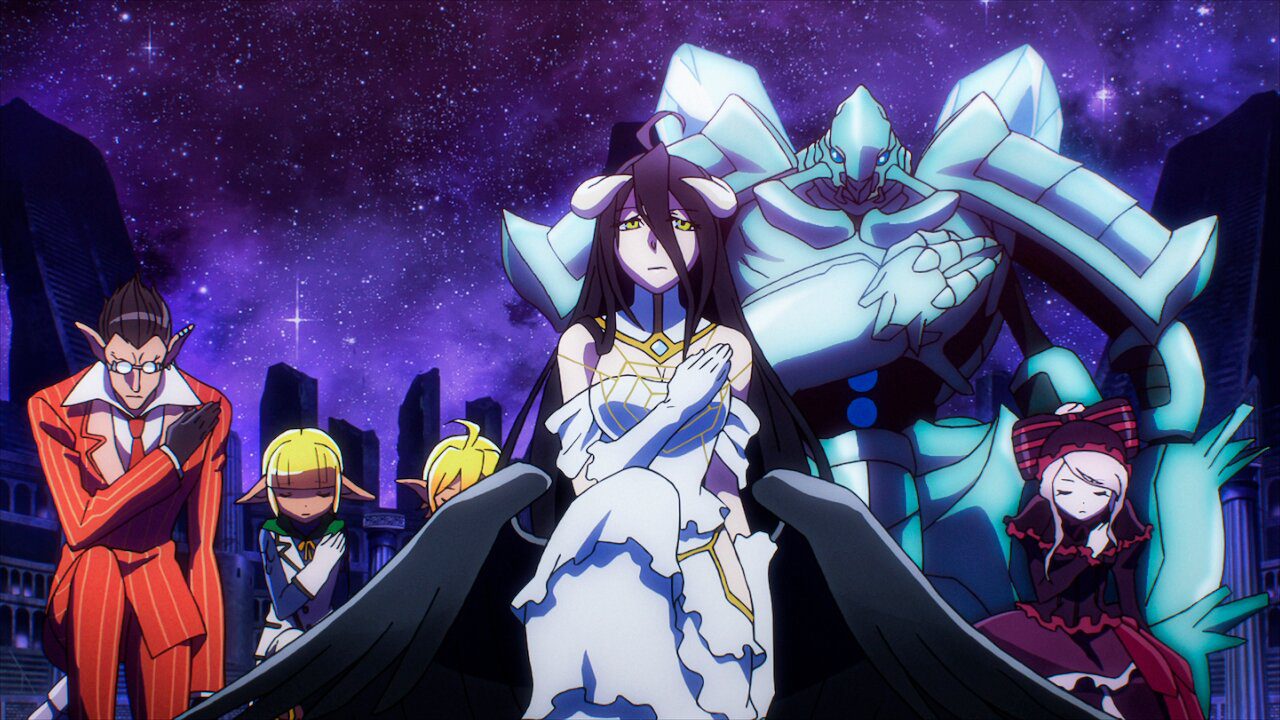 Isekai is the epitome of fantasy anime, and the story always has the character dying or summoning as a part of the plot point. Establishing a connection between the protagonist and the side characters is the hardest part. The only factor that can compare a good Isekai to a Bad Isekai anime are its characters. If the plot’s setting does not support or suit the character’s role, then it becomes uninteresting. While there are many famous Isekai Anime out there, Overlord is the one anime that has a huge fan base mostly cause of its characters.

Overlord’s story focuses on Momonga, a hardcore gamer who plays a popular game called Yggdrasil. Yggdrasil is a popular VR Game that has a vast world where players can build their guild and weapons. The most unique feature of this game is that it gives its players full freedom to customize anything. This game in the year 2138 came to an end as the server was shutting down. During the game’s final running hours, Momonga decides to play it for the last time. But tragedy struck him when he couldn’t log out of the game. Also, his NPC (Non-Player Characters) were able to talk.

He grasped at what had happened, and now he is on the quest to rule this world. Along with his guild members, he searches for more players like him. There are many vivid characters in this anime. So here is the Top 10 List of Best Characters in Overlord.

Lupusregina is part of the Maid Battle team of the Great Tomb of Nazarick. Her race is of a werewolf, and she was the creation of Mekongawa. She is always perceived as a Vigorous lady because of her friendly personality. But in truth, she is actually a Wolf in sheep’s clothes. She hides her murderous and manipulative personality. But besides these quirks, she is very loyal to Momonga and respects him a lot. Her Invisibility spell is very effective for her purposes, whether it is to distract enemies or to mess with Enri. 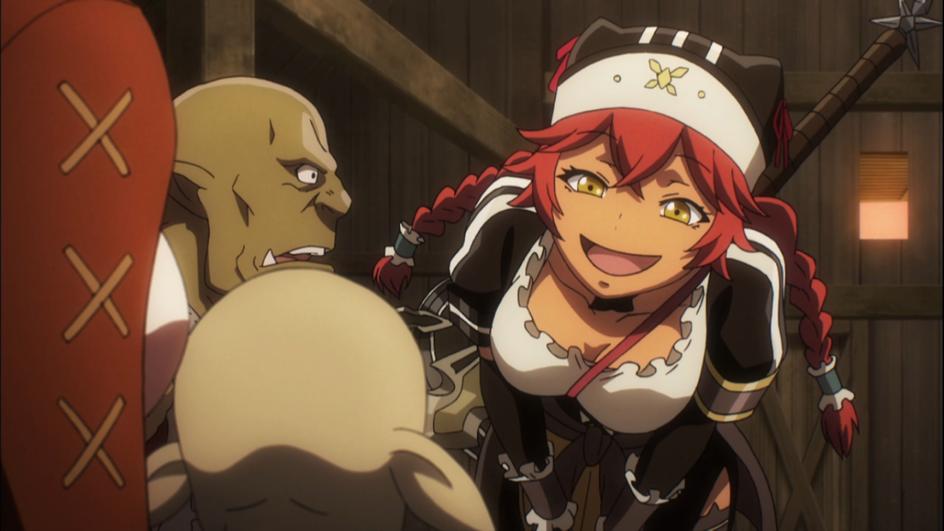 Lupusregina messing with other monsters

Also Read: Top 10 Orange Hair Anime Characters That You Will Love To See

Evileye is part of the Blue Rose adventurer Guild, also known as Vampire lord. She also had been a part of Thirteen heroes in the battle against evil deities. Although she looks like a teen, her real age is more than 250 years. Because of her Vampire personality, she always wears a mask and a cape around her. In the past, she always looked down on the weak and considered them foolish, but after meeting Momonga, she changed. Her love for Momonga is very alluring and one of the reasons for her massive fan following. 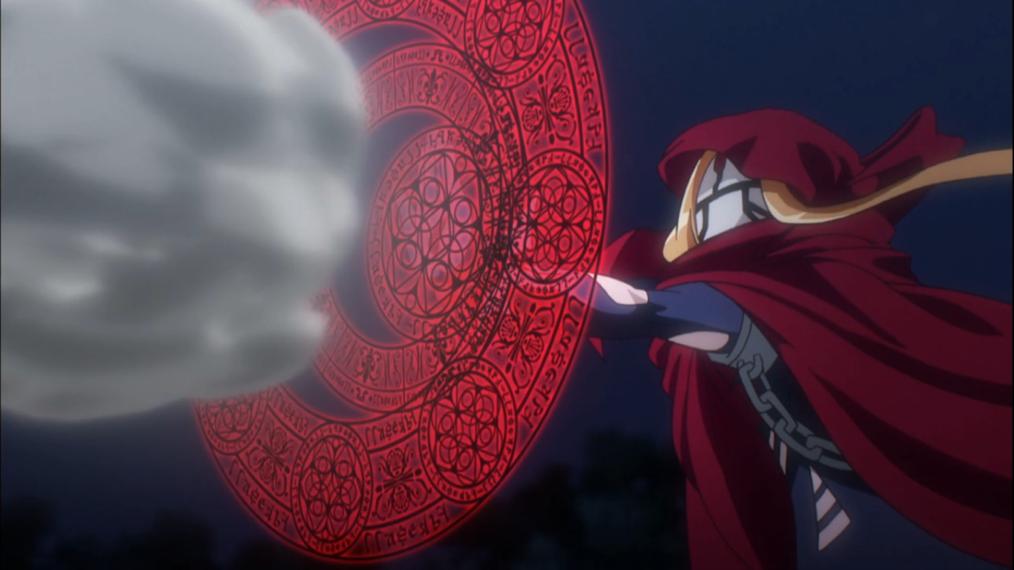 Also Read: 10 Most Charismatic Anime Characters of All Time

Entoma is also part of the Maid Battle Squad of the Great Tomb of Nazarick. Her race is of an Insect, and she was the creation of Genjiro. While she looks like a Young girl, her solemn form is of a Human-Spider. She is very fond of eating Human meat, especially the arms of men. And often lays traps to lure humans, but she also does not harm the ones with no ill intent towards her. She always follows Momonga’s orders and even suppresses her killing intent toward Evileye, which is her immortal enemy. 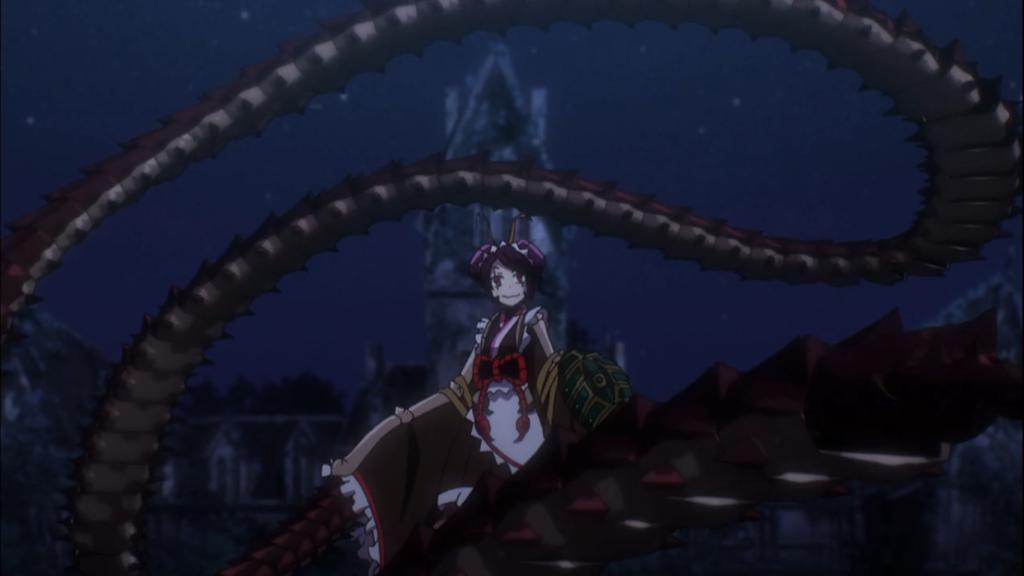 Entoma during her Spider transformation

Arche is part of group Foresight and one of the workers. She was once a noble of the Furt Family and also a prestigious graduate of Imperial Magic Academy. She is part of the human race, and her appearance is of a young lady around the age of 17. Arche was a prodigy among many great magic casters. Her talent was even greater than the academy’s headmaster. But because of her ability, she once saw Momonga’s real power and was shocked. Seeing his monstrous power, she was certain that she would never be able to defeat him in battle. 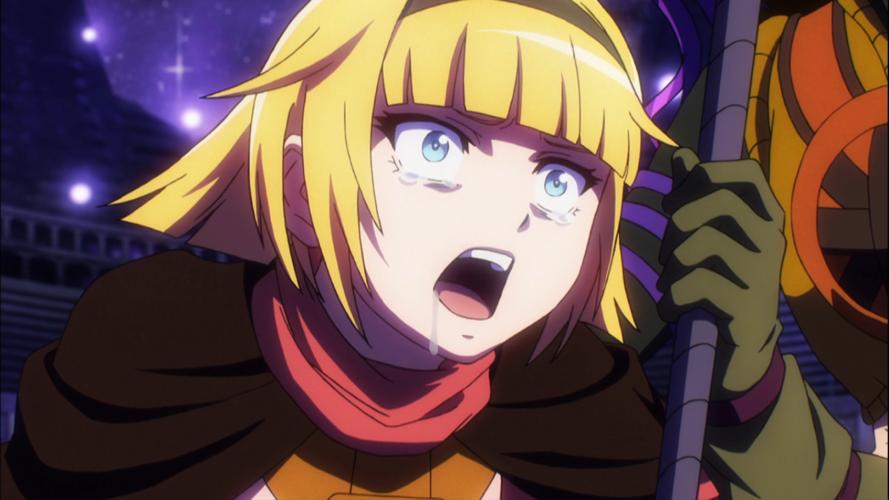 Demiurge is one of the floor guardians of the great tomb of Nazarick. His race is of a demon, and he is the creation of Ulbert Alain Odle. He mostly commands the defenses of all the Non-Player Characters. He is great at planning strategies and has a very sharp mind. However, his desire to torture people is part of his program nature created by Ulbert. He thinks of Momonga as a Deity above all mighty gods and follows him blindly. His sadistic nature and his cunningness are what made this character so popular among fans. 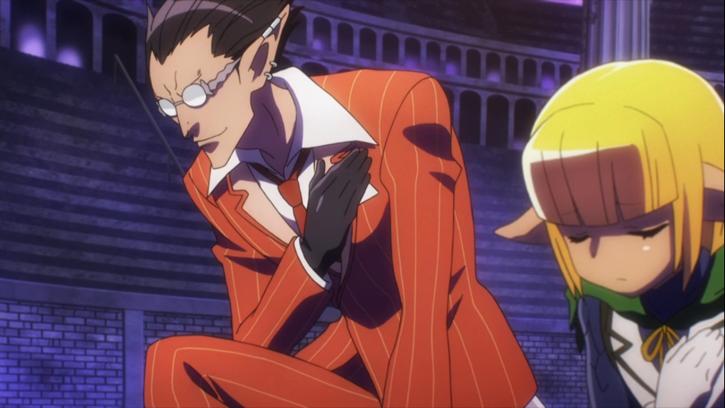 Demiurge bowing before the momonga

Sebas Tian is the Chief Servant of the Great Tomb of Nazarick and also the commander of all the servants. His race is of a Dragonoid, and he is the creation of Touch Me. He is known to possess great power, which is also the reason for him to be the leader of the Pleiades. His nature is of a person who likes to help people and behaves friendly towards every being. He is also quite nervous around Momonga as he is afraid of his loyalty being questioned. But despite that, he cares a lot about Momonga and can kill anybody for him, even his beloved Tuare. 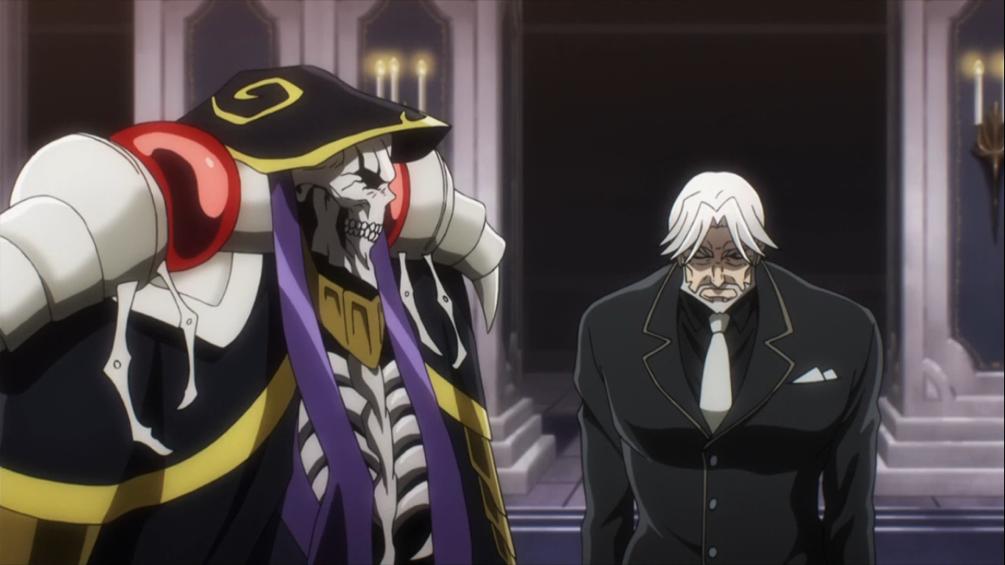 Also Read: Anime Characters That Are Similar To Batman

Narberal is one of the battle maids of the Great Tomb of Nazarick. Her race is of a Doppelganger, and she is the creation of Nishikienrai. She is a very graceful woman and is considered one of the greatest beauties of Narzarick. Even though she despises killing humans, when someone insults Momonga, she then loses herself and is immersed in killing emotions. She is also the most high-ranking member of Pleiades with her Arcane Magic. She is great at casting combat spells. Being Entoma’s sister, she was also very annoyed with Evileye, but as time passed by, she mellowed down towards her. 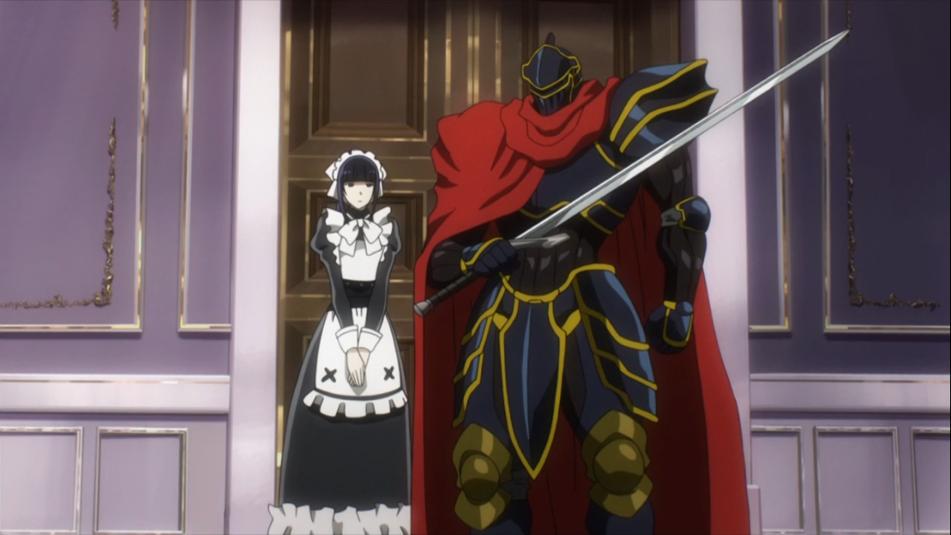 Also Read: Top 10 Most Popular Kawaii Anime Girls Whom You Will Fall in Love With

Shalltear is part of the floor guardians, and she guards the first to the third floor of the Great Tomb of Nazarick. Her face is of a true Vampire, and she is the creation of Peroroncino. She has a very coquettish behavior towards Momonga. Her habit of flirting with everyone and her desire for necrophilic activities is what makes her so unique from others. 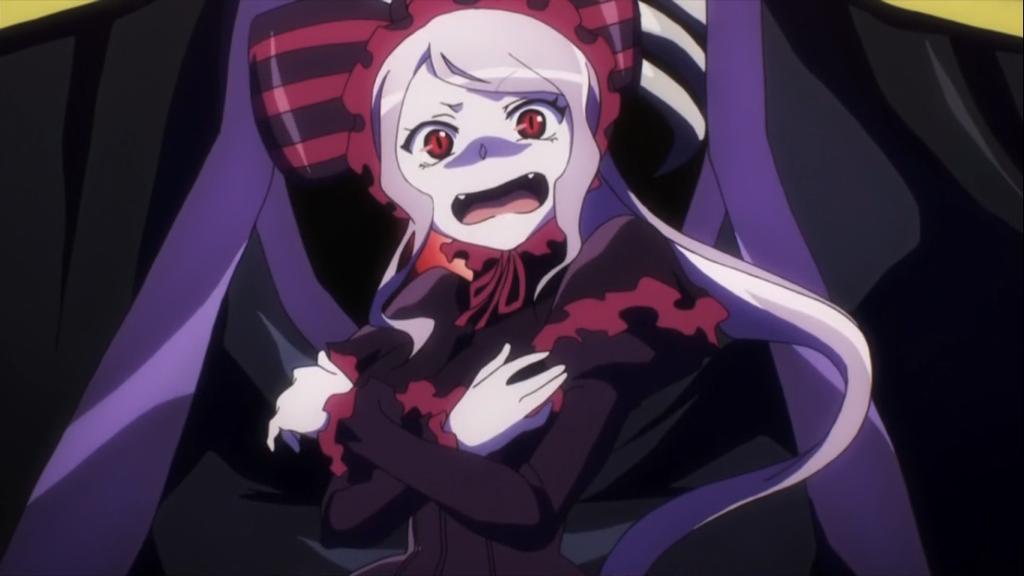 Shalltear being embarrassed in front of momonga

She also considers Albedo as a love rival towards Momonga as she wants to be Momonga’s bride. But despite all her eccentric personality, she is very determined in her goals to protect and help everyone in Nazarick.

Albedo is the Supervisor of all the guardians of the Great Tomb of Nazarick. Her race is of a Demon, and she is the creation of Tabula Smaragdina. She is known for possessing goddess-like beauty. And also has a very obsessive nature towards Momonga and often gets jealous of other women being close to him. 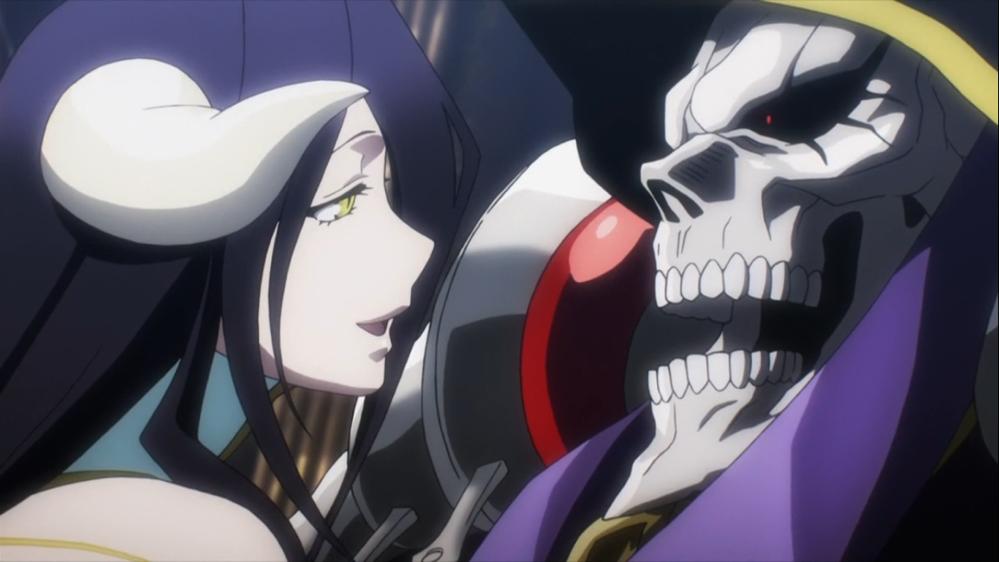 She has a very high intellectual understanding of the defense system of Nazarick. And is also very sensitive and often gets emotional whenever Momonga gets hurt in battle. She is the dream Waifu of many Anime fans and one of the best demon female characters.

Momonga, later known as Ainz Ooal Gown, is the main protagonist of the series. He was once a gamer and then was transferred to the game world. And now he is the Overlord of the Great Tomb of Nazarick. He is considered the Almighty supreme lord by all the non-player characters in the new world. His appearance is of a skeleton with black attire. With a very prudent personality, he often tends to make plans beforehand, facing a deadly mission. He not only cares about his non-player characters but also his actual former companions. 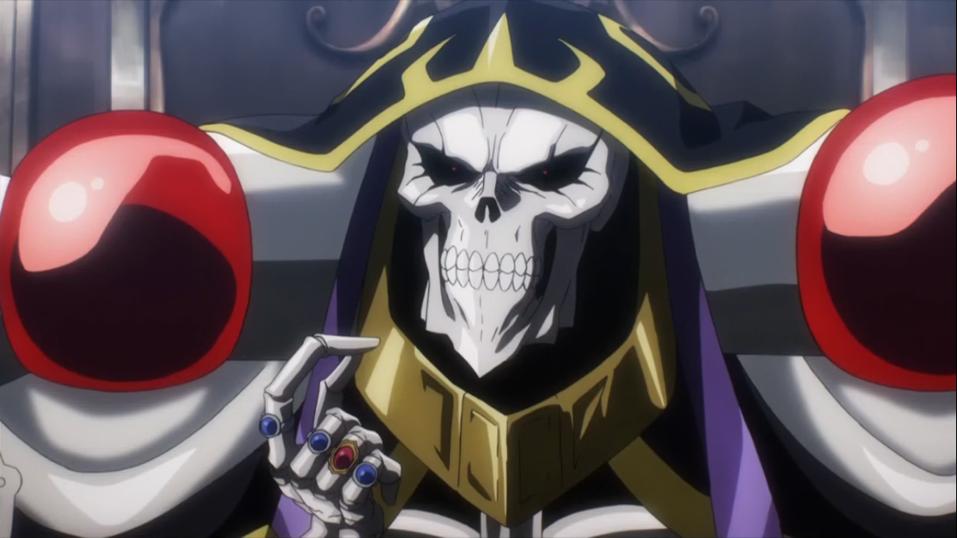 He respects Touch Me greatly as he was the one who entrusted him with the guild-master position after him. Even with all the guild members, he has very good relations. The one regret that he has is about him changing the setting of Albedo to be in Love with him cause he knows that the love she gives him now is fake, created only by his selfishness. Conclusively Ainz is a great protagonist who does justice to his Isekai world setting.

Along with 3 seasons, the Overlord franchise also includes movies that you can watch on Netflix.