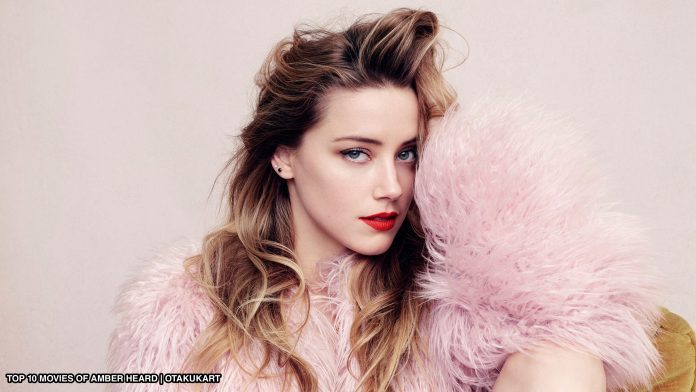 Heard is a popular American actress. She rose to prominence for her exemplary beauty and acting skills. However, these days, people are more inclined to know about her personal and professional life. Since Amber is in the limelight for a Defamation case with her ex-husband Johnny Depp well, this has certainly garnered a lot of attention in Amber’s life. And now people are looking forward to knowing everything about the top 10 movies of Amber Heard. Recently, Johnny just came forward with his perspective on the case, and after days, now it’s finally Amber Heard’s turn to testify her point of view and scenario.

Well, this explains all the enthusiasm of the Johnny and Amber fans since she quickly became a trending topic on the internet. According to many enraged fans, Amber is a really bad actress, whereas different people state different opinions. Nevertheless, all of a sudden, Amber’s movies are gaining an outward approach. And this is one of the main reasons that viewers long to know all the inside details of Amber Heard and her top 10 movies, as this article will tell you all about it. Moreover, a petition was launched to prohibit Amber from reprising her role as Mera in the upcoming Aquaman sequel.

Well, the defamation trial gave us a glimpse of how violent the couple used to be with each other. And through both the former lovers, we got to know a lot of details, and everything hinted toward a full-fledged toxic relationship. However, when it comes to their professional life, Amber began her career through a cameo in several music videos. And it, in turn, became a stepping stone for her to enter the entertainment industry.

Soon, she made her debut in television series in the year 2004. Since then, she began gaining popularity, and after months of effort, Amber finally bagged a lead role for herself in the thriller movie All Boys Love Mandy Lane’. It took more than four years for her to establish her name as a famous actress. Moreover, over these years, she mainly became popular for her controversial statements and acts. Apart from this, the Defamation trial certainly created a huge gap in her career line. Her role in the DC Aquaman was one of the most appreciated ones.

The Ward is a 2010 horror film starring Amber Heard as Kristen in the lead role. Moreover, this film is a John Carpenter directorial. The whole movie surrounds the life of Kristen, who causes an unexplained fire. And this incident imposed criminal charges against her. Since she is deemed to be a mentally unstable person, she’s taken to a mental institution. Things are fine at first until she realizes that her life is in danger. Some entity lurks in the dark, and now it’s haunting her too. Kristen tries her best to inform everyone, but nobody seems to listen to her. Will she succeed?

This is another action movie of Amber, and it became kinda popular for her acting skills. Amber starred alongside Nicolas Cage, and this movie premiered in the year 2011. The story had an unusual turn to it, as it surrounds the life of a man named John Milton, who rose back from the dead to avenge the death of his wife and child. The main reason behind his awakening from hell was his granddaughter. Jonah King is the main antagonist of this film, and he wants to kill her off as soon as possible as a sacrifice. Will he manage to save her?

8. All The Boys Love Mandy Lane

This 2006 movie is yet another horror mystery film with Amber Heard in the lead role. She portrayed the character of Mandy, and the entire story surrounds her life. Everything starts with her beauty, because of which many guys were looking forward to dating her. Soon, a guy named Dylan decides to invite her to a party for some reason, and she agrees to it. No matter wherever she went, each one of them died miserably. And all fingers were pointed at her best friend, Emmet.

This movie is quite complex, wherein Amber played the character of an assassin Vivi Delay. The main context revolves around the CIA Agent Ethan Renner, who decides to leave his job behind after he suffers from a fatal injury. As he doesn’t have much time left to live, his only wish is to spend all the final moments with his wife and daughter. But out of nowhere, Vivi decides to approach a cure, a drug that will help him to recover his original health. But this comes with a price. Will Ethan sacrifice some more moments from his life to gain back his health? This is one of the most entertaining movies in the top 10 list of Amber Heard.

This 2008 action sports drama is one of the best inspirational movies to be ever made. The whole story surrounds the frustrated life of a young man named Jake Tyler. Who cannot control his anger? And guess what? He needs to direct it towards some or the other thing. People started talking bad things about him since a lot of rumors circulated from his previous school. Amidst all the chaos, Jake manages to find an underground fight club, which becomes a strong reason for him to direct his life the way he wants.

Pineapple Express is a very popular comedy film that premiered in the year 2008. Moreover, the film received mixed reviews, but still, it managed to break several records. Well, this movie deserves to be a part of the top 10 movies of Amber Heard. However, she portrays the role of Angie Anderson. She garnered massive prominence through this movie. Apart from this, the entire story surrounds the life of a drug peddler, Dale Denton. He puts his life in danger after becoming an eyewitness to a gruesome murderer!

This 2015 crime drama film is pretty interesting and entertaining at the same time. The concepts used in this film were efficient for the popularity of Amber Heard. Moreover, the main context of the movie is about a struggling author named Stephen Elliot. Despite his strong mind, he still gave up most of his life on consuming drugs. Soon, a man named Hans Reiser decides to approach him to write a book on his life. And soon, he agrees to do so. But what if Stephen’s memories are confusing him? Will he ever figure out the truth behind his father’s nature and Hans’s intentions?

Zombieland is a very popular comedy film, which surrounds the life of four individuals, as they survive their way out of a zombie apocalypse. The movie had landed in the limelight again since Amber Heard had a role in the film. And she portrayed the role of 406. This movie is pretty fun to watch, as all of them stick together throughout this crisis. Moreover, people have already started caring for themselves since the outbreak can kill anyone at any point. Will Columbus manage to survive along with his three new friends?

Zack Snyder’s version of Justice League became very popular since many concepts were highlighted with utmost precision. The whole story surrounds the life of our DC heroes as they give their best to stop Steppenwolf from capturing Earth. Their goals with the Mother Boxes will be very devastating for humanity. While each one of them is secluded in a safe place, Steppenwolf decides to get them back personally. Now with Superman gone, their hope is fading day by day, whereas one of the Mother Boxes is under the ocean, protected by the guardians of Atlantis. Will Steppenwolf manage to destroy the world?

Aquaman is a 2018 James Wan directorial. This movie is a superhero film, and it revolves around the life of Arthur. He is the son of Atlanna and Thomas. From a very young age, Arthur knew about his capabilities as the majority of the powers were handed back to him by his mother. For saving him, Atlanna decides to go back, but instead, she is executed. Moreover, Amber Heard portrays the role of Princess Mera. She knew that Atlantis required a true king, and her only purpose was to get the rightful owner back. Will she manage to persuade Arthur?

Also Read: Top 10 Episodes From Money Heist That You Should Watch