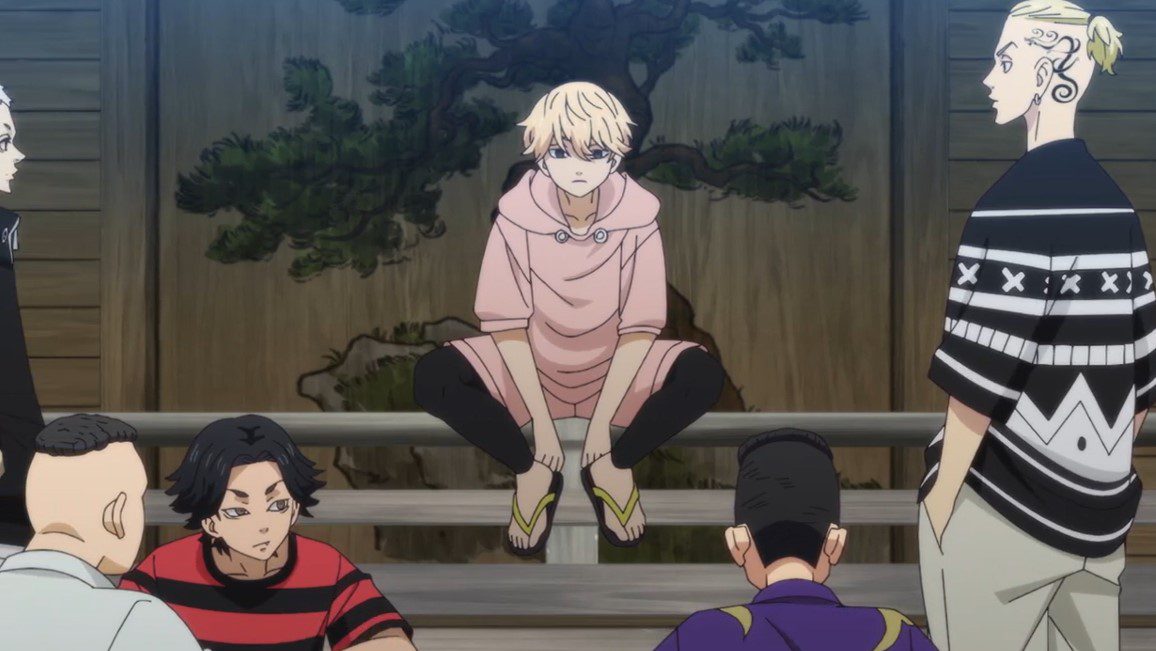 The final battle between Valhalla and Toman ends with Tokyo Revengers Episode 23. Mikey punishing Kazutora for stabbing Baji. Baji reveals the truth to Takemichi, who managed to stop Mikey from killing Kazutora. This episode will be released when the anime will be broadcasted on Sunday. From the latest Tokyo Revengers episode, Mikey picks up Baji’s charm and recalls his past where they form Tokyo Manji Gang. In the past, the crew rides on the bike heading to Shrine, where Mikey has summoned them. On 19 June 2003, twelve-year-old Mikey and the likes of Baji gather at the Shrine.

Draken, Mitsuya, Pah-Chin, and Kazutora were the ones to arrive in time, but Baji and Mikey were late. Draken comments that he knew that Mikey would come late like usual. Baji comments that Mikey drags him back since he has to carry him. Draken asks Mikey why he called them to the Shrine. Mikey asks the crew if they have ever heard of Black Dragons. Mitsuya comments that he heard that there are brutal and they are three years older than them. Mikey asks Kazutora why he didn’t tell them, but Baji told him that Kazutora singlehanded battled with Black Dragons.

Draken became the vice commander, and Mitsuya became the mediator to command their elite guard. Pah-Chi is the powerhouse that will carry the gang’s banner, and Kazutora will be in the attack unit. Mikey told the boys to come up with the name of their team. Mikey came up with ” The Tokyo Manjiro Gang.” The boys think that it is lame. But Draken replies that even though it is a stupid name, they are in for it. Mitsuya adds that fighting with the Black Dragons is good even though that name sucks.

Baji said it settles, and Mikey will create this new era. Mikey asks the gang’s motto, and Baji replies that it is to risk their lives for each other. They both decided to throw a party to celebrate the beginning of the Tokyo Manji Gang. The boys buy a charm and realize that they can afford one and give it to Baji since he is the reason they formed this gang. Baji accepted the charm written traffic safety and said he would take good care of it. Mikey is holding it back to the battlefield and realizes that Baji didn’t abandon them even though he sided with Valhalla, but there was the reason.

The Tokyo Manji Gang shed tears since Baji is dying, and Mikey realizes that Baji is the one who created Toman, not him. They both remember their motto of protecting each other even though they are hurt. Takemichi admits that Baji fought alone to keep that promise. The Valhalla Gang decided to leave after hearing police sirens. Kazutora chose to remain with Baji since he is the one who stabbed him. Later the cops arrive and arrest Kazutora. Takemichi and Draken visit Kazutora at Juvie.

Tokyo-Revengers-Episode 23 will be released on 12 September 2021, at 2:08 AM. Don’t miss the conclusion of this anime next week since it will be the episode prior to the finale. Let’s look at the Tokyo Revengers’ latest developments and official updates below.

Where To Watch Tokyo Revengers Episode 23

You can watch Tokyo Revengers Episode 23 online on Crunchyroll, Muse Asia, and ANIPLUS. Tokyo Revengers is available with English subtitles online. The upcoming season of Tokyo Revengers will be announced soon since the last episode is about to release. Don’t miss the episode finale since Mikey is about to welcome Kazutora out of jail.

Anni-Frid Lyngstad Net Worth: About The Singer’s Wealth