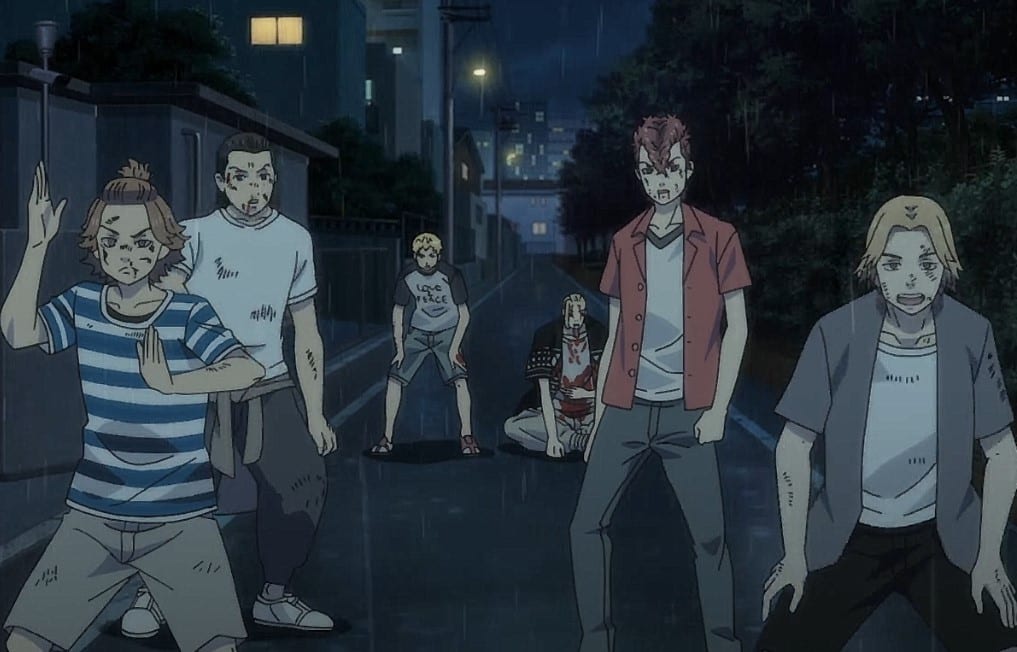 A boy who used to be considered a loser lost everything in his life and works at a store to pack stock. Takemichi though that his life is over after losing his girlfriends and his precious friends. One day Takemichi met with Naoto, who saved his life, and told Takemichi about traveling to the past to change history and protect everyone. He accepted Naoto’s offer and travel to the past before the brawl between the gangs begins. Let’s find more about Tokyo Revengers below.

Takemichi finds the truth beyond Dranken Death and decided to save Dranken. Unfortunately, Dranken got stabbed during the brawl, but Takemichi helped him after discovering that Draken is still alive. Kiyomasa arrives and notices that his nemesis is still alive and decides to kill Draken. Takemichi challenged Kiyomasa on 0ne-one-one hand combat. The two exchanged heavy blows, but Takemichi’s side was a disadvantage since the other two are girls. Fortunately, the Mizo Mid’s Ferocious Five arrives and helps Takemichi to smash Kiyomasa and his men. Chifuyu, Atsushi, Kazushi, and Makoto dominated Kiyomasa and his gang.

The sirens alarm and Kiyomasa’s gang decided to withdraw. Takemichi comments that they have won. He realizes that he kept doing things out of his league and mess up. Dranken is severely injured, but the boys protected him. The boys told Takemichi that they won. Chifuyu reminds Takemichi about his Super Miracle Punch. Makoto comments that he saw Chifuyu receiving blows.  The guys realize that they have to take Dranken to the hospital since he has lost blood. Atsushi helps to stop Takemichi’s wounded palm from bleeding. Emma and Hina return with the ambulance.

The episode’s title is ”Respect.” At the parking lot, The Tokyo Manji Gang defeated the Biker’s Gang. Naoya comments that they have finished, but his leg got hurt. Takashi asks the Tokyo Manji Gang about Mike, and they point at Mikey’s location. Mikey and Punishments are still standing, and Punishment AKA Hanma refuses to back down even though his men got defeated. Finally, Hanma is ready to face death and asks Mikey if he is tired. The build guy cheese kop guy with a tattoo on his head arrives and reminds Hanma that it is time to go.

Hanma agrees after hearing the cops siren and told Mikey that he would witness the creation most sinister Biker Gang alliance in the Kanto region: Valhalla. The cheese kop guy is known as Sin. Hanma reveals that he is Valhalla’s first vice commander, Hanma Shuji. All the Biker Gang members left the parking lot in style, but they got beaten in fashion. Meanwhile, Draken and Takemichi got transported to the hospital.

Takemichi prays for Draken to survive since the life machine show 58% of survival. Draken moves his hand, and Takemichi notice that Ken has woke up and thanks Takemichicy after calling him Takemitchy. Ken comments that Takemitchy saved his life. Takemichi replies, that man, don’t say stuff like that, and it is not Draken’s style. Draken told Takemichi to take care of Mikey, and the life machine drops to zero. The doctor comments that Draken has gone into cardiac arrest and behind to help him.

They perform CPR more than ten times, but Draken’s heart is not kicking. Mikey is chasing the ambulance using his bike. Later the ambulance arrives inside the hospital, and Draken got taken to the operation room. Takemichi believes that Draken will survive. Peh and Takashi come before Mikey, and Takemichi explains everything. Mikey arrived and told all of them to shut up and wait since they are in hospital. The boys are surprised that Mikey is trying to suppress his emotions.

Mikey reveals that Draken told him that they would rule the world together. Mikey told the crew to believe in Ken. Takemichi realizes that they don’t have to panic, and they must have faith and hope. After an hour, the operation got finished, and the door came out. The doctor said they managed to save his life, and the process was a success. The whole team celebrates and decides to shout outside. On 10 August, after a week from the battle, Takemichi became popular and gained the respect of everyone in the town.

Takemichi leads his crew wearing a mein trouser written outlaw. The boys in the streets comment that T-man shut down the 8/3 battle. T-man earned a title and get called Takemichi the legend. Chifuya wonders why they save this guy since he is showing off too much. Later the boys arrive at the hospital, and Draken asks Takemichi who dies and makes him a legend. Draken told Takemichi not to get over himself after getting a little attention. In the evening, Takemichi traveled to the future and realized that he stopped Dranken from dying. Naoto calls Takenmichi and told him to go to the past and met with Hina.