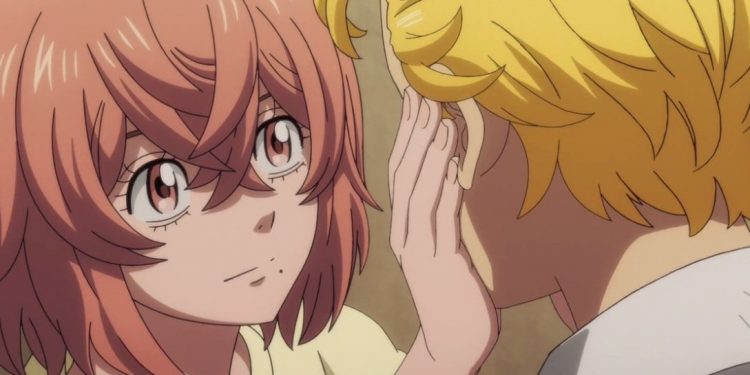 Tokyo Revengers Chapter 236 has been delayed due to a holiday but for a week. The new Era of Takemichi has recently begun after the Three Deities’ brawl ended. Kantou Manji Gang became the new ruler of Tokyo since Mickey killed South, and Senju sacrificed BRAHMAN for Takemichi’s sake. She knew that Mickey was unstoppable, and he would have killed Takemichi. Tokyo Revengers will return after a break. Things started at the hospital where Takemichi is getting his treatment. Chifuyu visits him and reminds him that he will pay for Draken’s death.

Chifuyu believes that they have to blame Takemichi and leave the hospital, then Hinata arrives. Seven days have passed since the brawl between Three Deities has ended. The war had ended with two dead, but Takemichi decided to solve the matters alone while avoiding his friends getting killed. Takemichi’s friends arrived at the hospital, but Hina was not there. They are glad that he is doing better and will get discharged soon. But the bandages around his arm are yet to be removed since it will take time to heal.

They remind Takemichi to protect Hina and quit showing them sad faces. One of the guys realizes that he has something that might cheer Takemichi and put an adult movie under Takemichi’s bed. He told Takemichi not to forget to watch it. Hina has returned, but she didn’t hear that; Takemichi thanks them and amits that he will keep Hina safe. Hina smiles and realizes that Takemichi is bothered by something. She wonders if something is wrong. Takemichi told her not to worry since he was just carried away. He knows that they care about him, and they wish him well.

Hina decided to go out, and Takemichi told her that he would be okay. Takemichi sits alone, thinks about something, and wonders how he can solve the mystery behind the brawl between Three Deities. Later another gang’s visit pays their condolences, knowing that Draken and South are dead. They console Takemichi realizing that Takemichi cares for Draken even though Draken sacrificed his life. They apologize since they knew nothing about the battle and Draken’s death until the Three Deities’ brawl ended. Takemichi listens to wise words, but he feels hurt since he failed to protect everyone and bring Mickey back.

The boys told Takemichi to ask them whenever he needed anything since he could count on them. But Takemichi realizes that he needs no one’s help since he avoids what puts him in pain. The boys remind him that they are prepared to help him. Takemichi told them that he would manage alone and it would be okay. But he decided to keep them in the dark since he planned and didn’t want them to interfere. He knows that he doesn’t have to break his promise. The boys decided to leave and told him that they would meet later. He thanked them for their time since they helped him.

Takemichi promised to protect everyone by himself. Hina returns and notices that Takemichi is talking alone. She realizes that his friends had left and reminds Takemichi that they visited him for three days when he was unconscious. She told him that his friends were worried about him, and he must be happy that he was blessed with caring friends. Takemichi gets worried that he returned and got his friends involved, and he made the worst mistake by being selfish.

You will be able to read Tokyo-Revengers-Chapter 236 online on various websites. The manga has delayed chapter 236. The aftermath of a brawl between Three Deities will begin in the upcoming chapter; more awaits for Takemichi. Let’s meet when Tokyo Revengers-Chapter 236 is released.