Today we’ll be talking about To Your Eternity Episode 9. Gugu met with Fushi and Pioran, the man who saved him after falling from the mountain. Gugu comes from the land in Takunaha, and Fushi finds that Gugu’s face is injured. Gugu keeps on hiding his face behind the mask. Gugu calls Fushi a monster, but he cared for Fushi like Fusihi is his younger brother. Fushi, Gugu, Pioran, and Booze Man expose Fushi to further stimulation. He learned to smile, laugh, and talk the human language. In the morning, Reona told the crew that she would be starting to work with them here.

Booze Man asks Reona if she is sure after realizing the Reona is the daughter of a Prince. Reona agrees and said that she has a request; the trio wonders what she wants to ask them. She asks them to allow her to stay with them, and Gugu can’t believe that they will be staying with one of the Royals. Booze Man comments that he will be happy to have such an adorable girl working with them. Reona left, saying that she will see them tomorrow. During dinner time, Gugu asks Booze Man if he is sure about having Reona here. Before we jump to To Your Eternity Episode 9, let’s have a quick recap of Episode 8.

Previously on To Your Eternity Episode 8

Booze Man comments that they have lots of room that a guest can stay. He told Fushi to hide his monstrous form when Reona is around. Fushi asks why, and Booze Man replies that Reona will be surprised to see Fushi in another state. Gugu realizes that the girl stole his heart and wonders how he will cope when she is around. Later Fushi helps Gugu do the dishes, and Gugu asks Fushi what he can do besides changing forms.

Fushi knows few words, and when he cannot answer a question, he said he doesn’t know. Gugu comments that he is tired of hearing the same thing and asks Fushi to show him something new. Fushi realizes that during his last battle, he swallowed some weapons and summons those weapons. Gugu is impressed that Fushi has called a spear and asks how he doe that.

Fushi replies that the weapons come out whenever he wants them to come out. Gugu said that he wants to see Fushi doing something immortal besides summoning weapons. He took a knife and cuts Fushi’s hand, and it regenerates. Gugu is glad to see Fushi’s wound closing and realizes that nothing can harm Fushi. Fushi turns his hand upside down, and the knife emerges from his palm of his hand. Let’s now see what happens into Your Eternity Episode 9.

Gugu realizes that Fushi can copy anything that’s hurt him and recreate that item. He took a touch of fire, thinking if Fushi can copy can make a copy of a fire. Gugu burns Fushi’s hand, but only the stick emerges. Gugu complains that it is only a stick without a fire. Later, Fushi heads out, turns into his snow wolf form, and realizes that he is missing his past life. In the morning, Reona arrives and notices that Fushi is not around.

She confronts Gugu and asks about Fushi. Gugu reveals that he has never seen Fushi since last night, and he thinks that Fushi will back before lunch.  Gugu comments that Fushi won’t miss his favorite lunch, and he asks about Reona’s arm. Reona replied that her wound is getting better. Booze Man remarks that the injury is from three months ago and said it would heal soon. Gugu told Booze Man to help Reona recover fast. 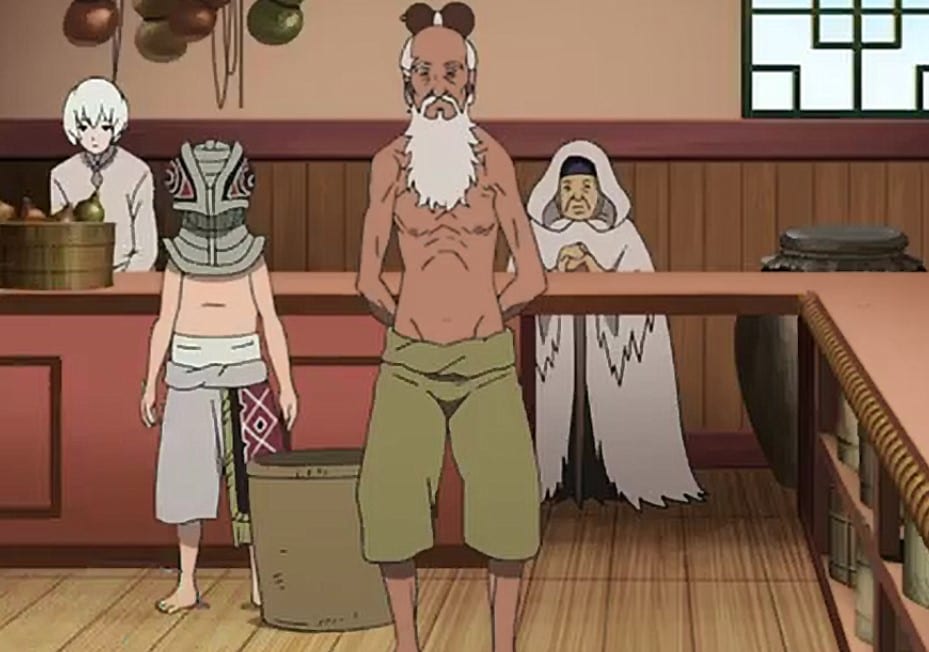 Booze Man draws something out of Gugu’s hidden face and fille a cup. Gugu asks what that is, and he replies that it is alcohol that will heal Reona’s wound. Gugu realizes that he is a monster like Fushi and Fushi is his brother. But he thinks that he has to make money and get treated by a professional doctor. Later, Gugu met with Shin lying on the street, and he gives him an expensive ring to make a fortune. In the evening, Fushi turns into a bear and protects Gugu from humans who were hunting him.

To Your Eternity Episode 9 Release Date