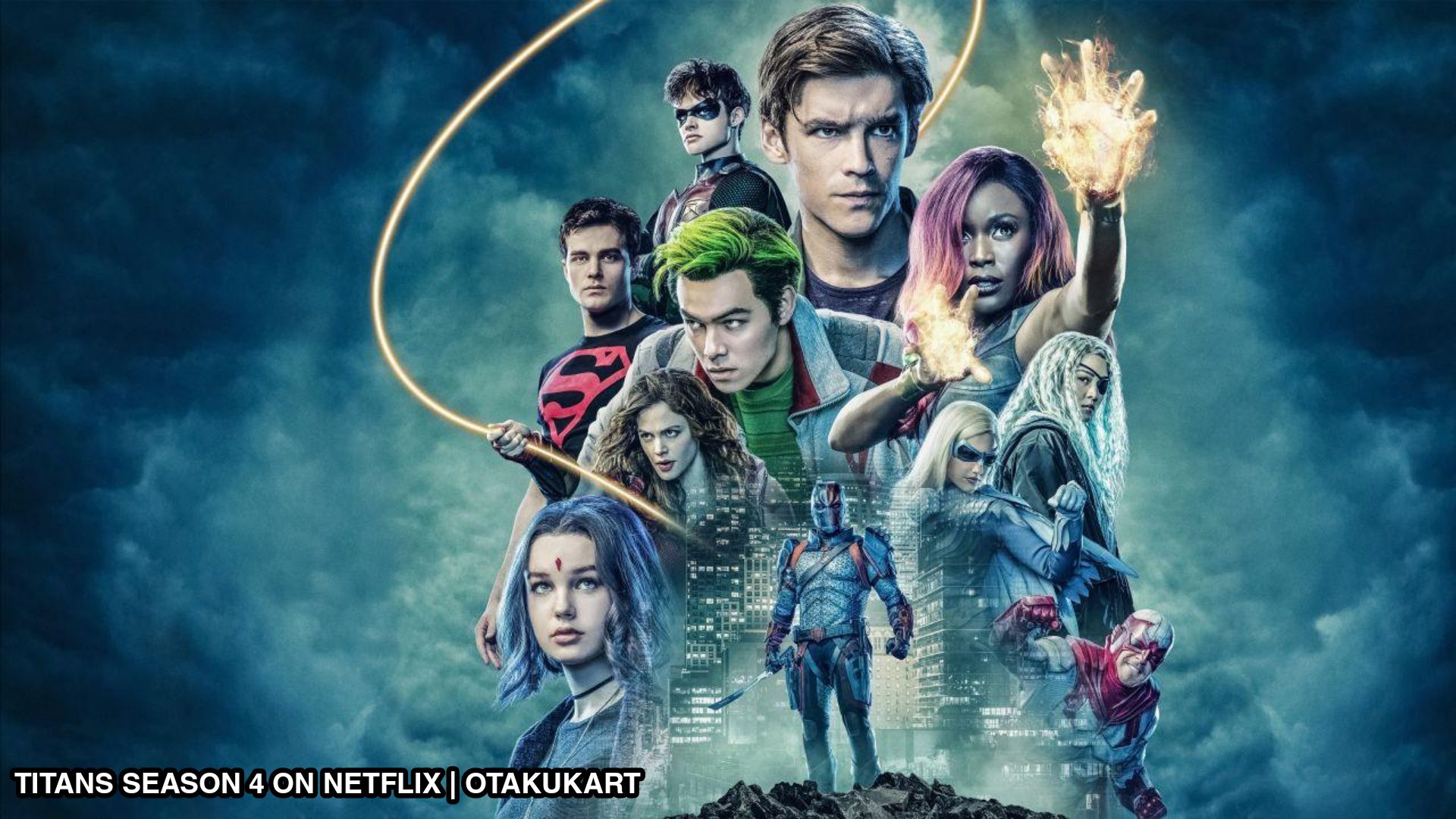 Titans is one of the most popular television shows and because of its popularity, fans are deeply interested to know more about all the inside details of this show. And guess what? You might be aware of this series since we all have been around it since our childhood. Titans is entirely based on the superhero genre and every episode will give you a very different vibe. Moreover, the entire series is based on the Teen Titans comic line of the DC universe. Well, viewers around the world are desperately waiting for the new seasons to launch. And this article will tell you all about season 4 of Titans and its release date.

Little did you know, that the development for this series began in September 2014. Since then the creators of this show has been planning to launch the show. Even though they had a lot of stuff to do. The creators didn’t delay their schedules and went on with selecting the right casting members for this television series. Whatever that was left off was completed in 2016 and 2017. So this explains the arrival of the first season in the year 2018. However, the release date of Titans season 4 became a very popular topic on the internet.

The whole series surrounds the life of young individuals who belong to different corners of the world. Each individual is possessed with tremendous power. Moreover, these young ones are planning to work together so that they can easily defeat the evil villains that haunt the common people. At first, they never planned to work with each other. But as the story moved on, you will find them together as a team. Moreover, the best part about this series would be the coverage of each character’s life. Because every character has their own set of problems and fears to face. 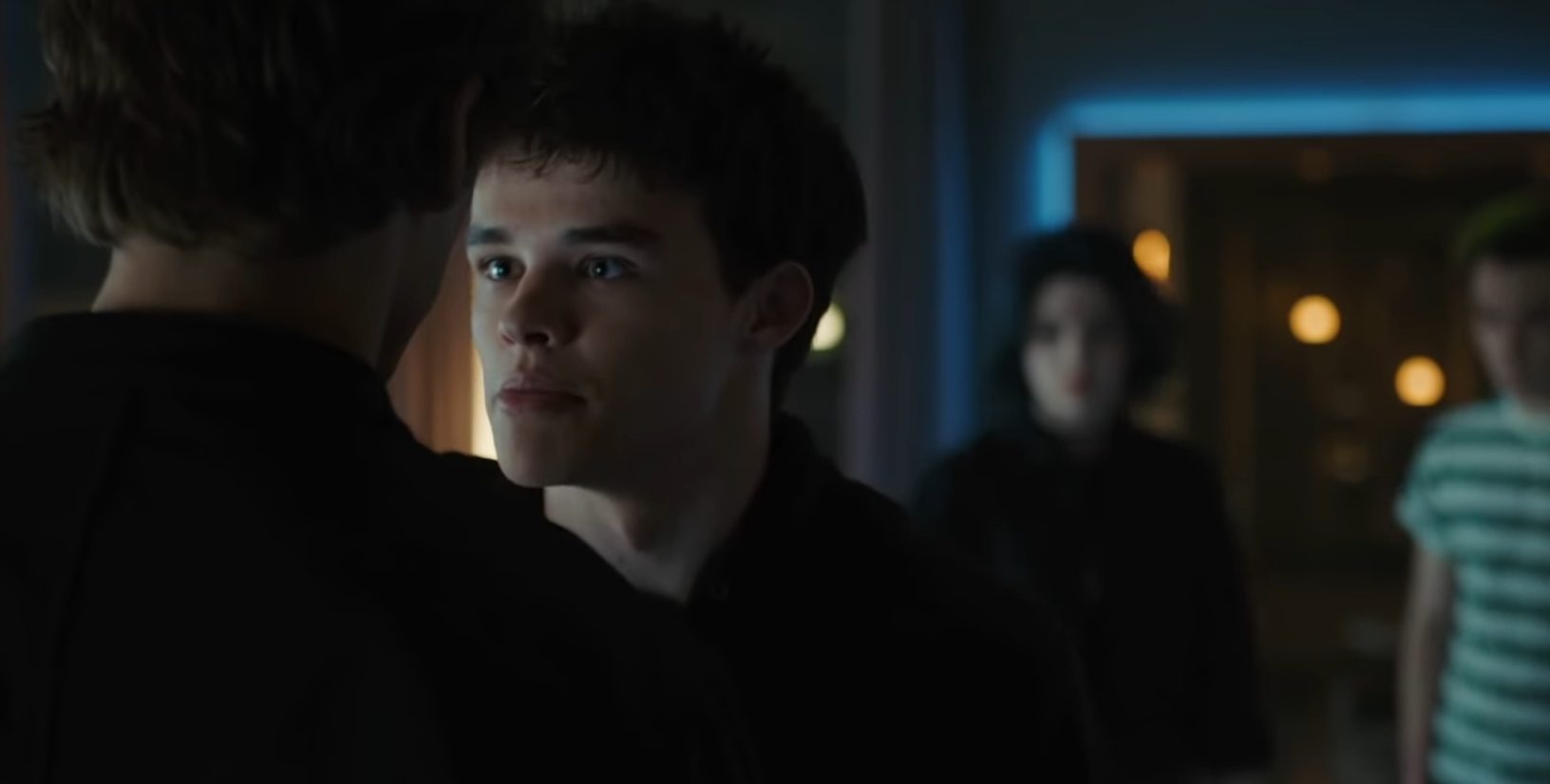 And by the end of the season, everyone is back to their original positions and powers. While many of them already fought with the issues they had in their life. Season 1 begins with the introductions of Rachel Roth and other characters of Kory Anders and Gar Logan- the beast boy. Episode one will give you detailed information on Rachel’s visions which haunts her every time. On the other hand, Kory is suffering from memory loss, wherein she is struggling to find out more about her true identity. Moreover, season one also explains to us about The Organization who are looking forward to taking in Rachel for their primary goals.

Also Read: When Can We Expect Sword Art Online Season 5 To Release?

Well, when it comes to organization, their main purpose is to reunite Rachel and her father Trigon. And Trigon needs this child to easily enter into Earth’s dimension. She’s the only way, through which he can easily step into this planet. So, from the very first episode  you’ll realize that Rachel is constantly in danger as this cult is dedicated to helping Trigon! Soon, things began to become even more complicated as Rachel is not able to contain her powers. So instead of running from their problems, they work together as a team and fight off the Organisation.

Well, when it comes to the cast and characters of this series, you’ll get to see a whole star cast. Every actor is widely popular and the main reason behind their popularity would be this show. Moreover, every actor who played their paly his series garnered a lot of popularity and majorly the credit goes to all the lead actors of this story. Moreover, when it comes to the character of Rachel, Kory and Gar- these roles are portrayed by Teagan Croft, Anna Diop and Ryan Potter. However, these three actors rose to prominence through their acting skills in the first season. 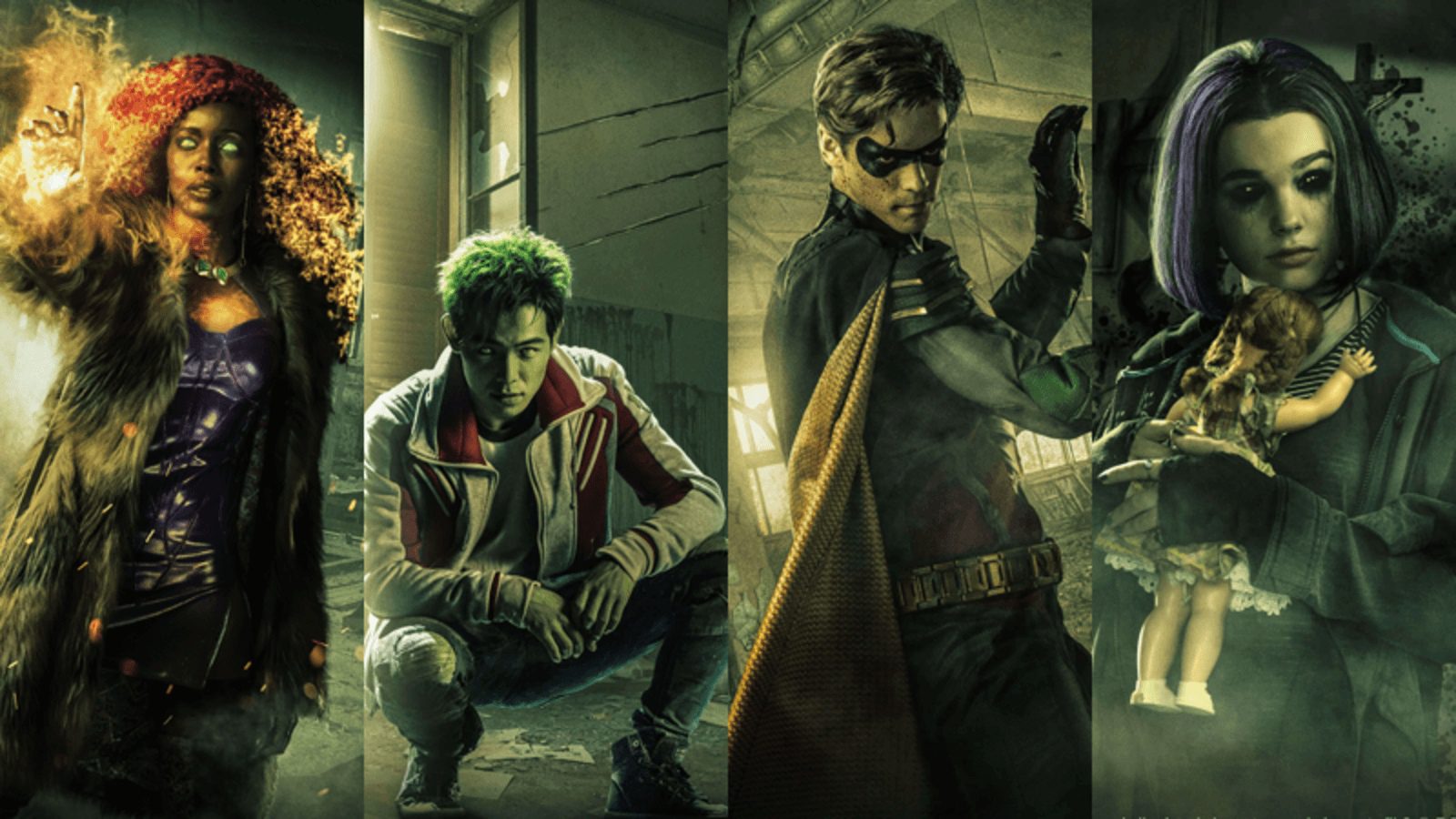 When it comes to all the other actors, Brenton Thwaites portrayed the role of Dick Grayson. However, according to the series, Dick was working alongside Batman as Robin and he is also the leader of Teen Titans. Throughout the whole series, Dick played a very important role in Rachel’s life. And he was the main link between her and the Teen Titans group. Moreover, the roles of Hawk and Deathstroke were portrayed by Alan Ritchson and Esai Morales. Both of these characters play a very significant part in the upcoming seasons of this show.

Well, the third season began its premiere in August 2021. Speaking of this season, it has around 13 episodes and every episode highlights a very important part of the Titans franchise. Well, the third instalment of this series is pretty dark and heartbreaking at the same time. Dick Grayson was completely responsible for all the activities that happened with the Teen Titans under his watch. But things became even more complicated When Dick is aware of Jason’s death. And it was caused by Joker. So forcefully, Dick had to leave his responsibilities behind. Soon, he travels to Gotham City. 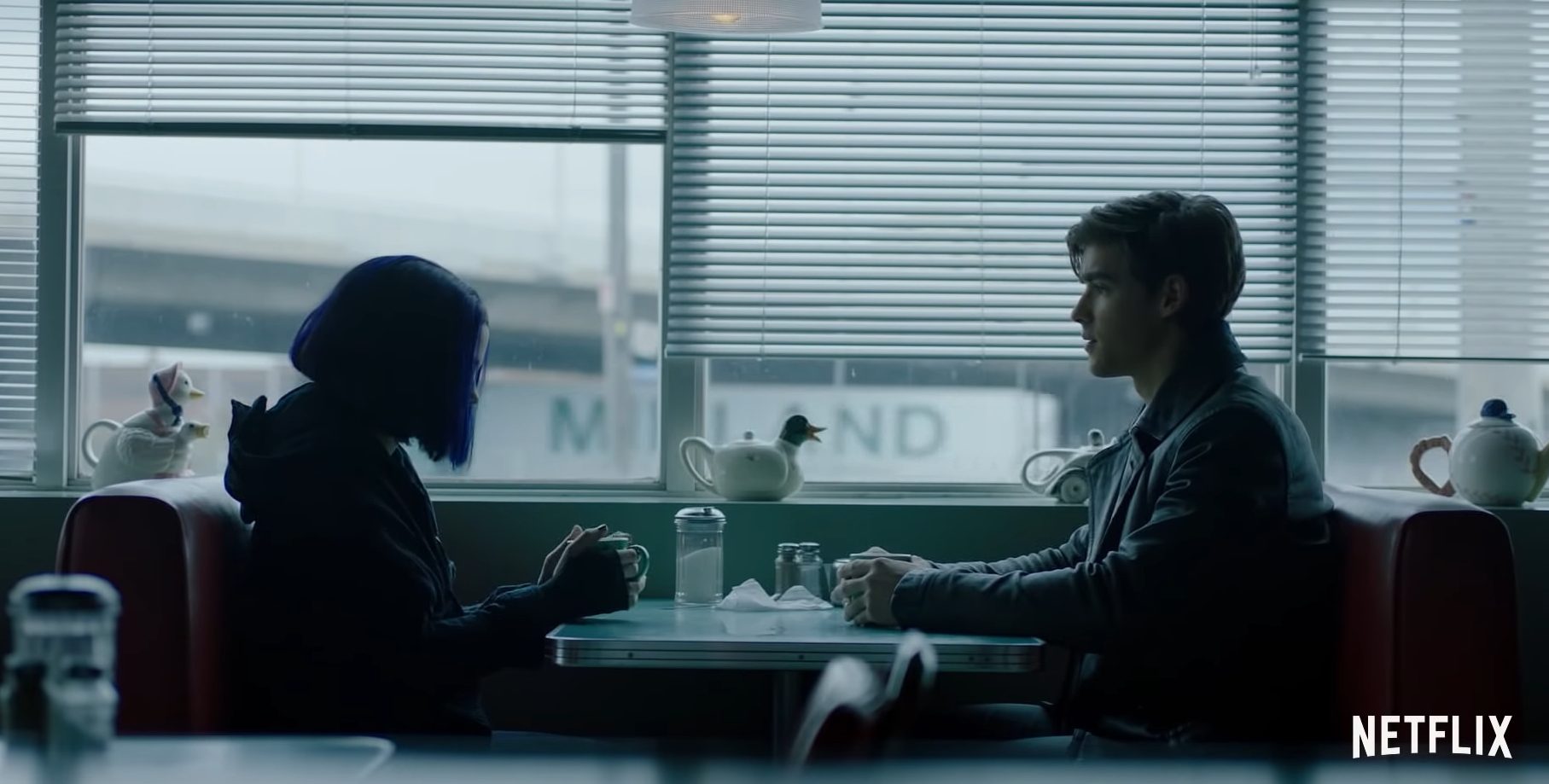 Titans: Season one scenes of Raven and Dick Grayson having a chat about each other

On the other hand, Joker is murdered by Batman. Jason’s death affected him to the core and this was visible to everyone. To their surprise, things take a different turn, when everyone releases that Jason is back. But it isn’t his original self. Jason came back as Red-hood. Well, Jason kidnaps Hank and attaches a bomb to his chest. But to set him free, Jason’s demands were pretty high. He wanted the Titans to get him Gold bars from the bank. Even though Dick refused this, Dawn still managed to steal them and give them to Red-hood. But in the rescuing process, Dawn ends up killing Hank.

His death brings in a lot of misery for the Titans and Dick. Dick was pretty furious and he wanted to learn the reason behind Jason’s transformation. And guess what? Crane lured him into this situation. The main reason behind this was Jason’s realisation. As Jason was suffering from nightmares, Batman had plans to free him from his tasks as Robin. And this didn’t sit well with Jason. To keep his mind calm, he requested Crane to offer him a drug that would help him with his fears. But this did not end well. Crane used this situation for his benefit and resurrected him as Red-hood.

Well, the whole season focuses on Dick’s efforts to rescue Gotham from Red-hood and this didn’t turn out well, because the residents of Gotham were manipulated by Crane and in their eyes, Red-hood was the hero. So they attacked Dick but luckily Jason helped him too. But towards the end, the whole realise that Crane is planning to kill every individual in Gotham City. Since Dick is dying, Gar gets him to the Lazarus Pit. While other members keep everything busy, Dick is back in his form again.

Titans: Scenes of all the teen titans from the episodes of season 3

So towards the end, you’ll realize that Crane is going crazy with each passing minute. Moreover, Crane has already planned everything in detail. He had bad intentions of using his chemicals on the residents of Gotham. They had no choice but to destroy the bombs containing Crane’s chemical. Soon, the Titans reunite and they successfully decode the locations of these bombs. Towards the end, Jason gets back with Batman on good terms. But ends up leaving eventually. On the other hand, The Titans are back in San Francisco.

Well, because of the previous season, fans are highly anticipating the arrival of season 4 of Titans. And guess what? The fourth season is announced! Moreover, the creators are already looking forward to creating more from the show. But there is no official date for the arrival of this series. Since the previous season ended in October 2021, the makers of Titans are planning more and more concepts for the episodes of season 4. There are several speculations about the release date and as per the DC fans, Titans will be back by the end of 2022.

Titans: Season 4 of this show is expected to release at the end of 2022

Well, speaking of this, the show will first air on HBO Max. And once all the episodes are uploaded, fans are sure that Netflix will launch the fourth season soon! When it comes to this show, HBO Max has taken all the rights and you’ll be able to see all the prominent characters from the previous season as well. According to the Titans fans, the show is currently under production and the fourth season will be very distinctive from all the previously aired seasons. However, one thing is for sure, that every season of this show comes in with a new experience and the upcoming season will bring in some interesting and new concepts too!

Also Read: Where To Watch Kung Fu Season 2 Online In The UK, US, & Australia?