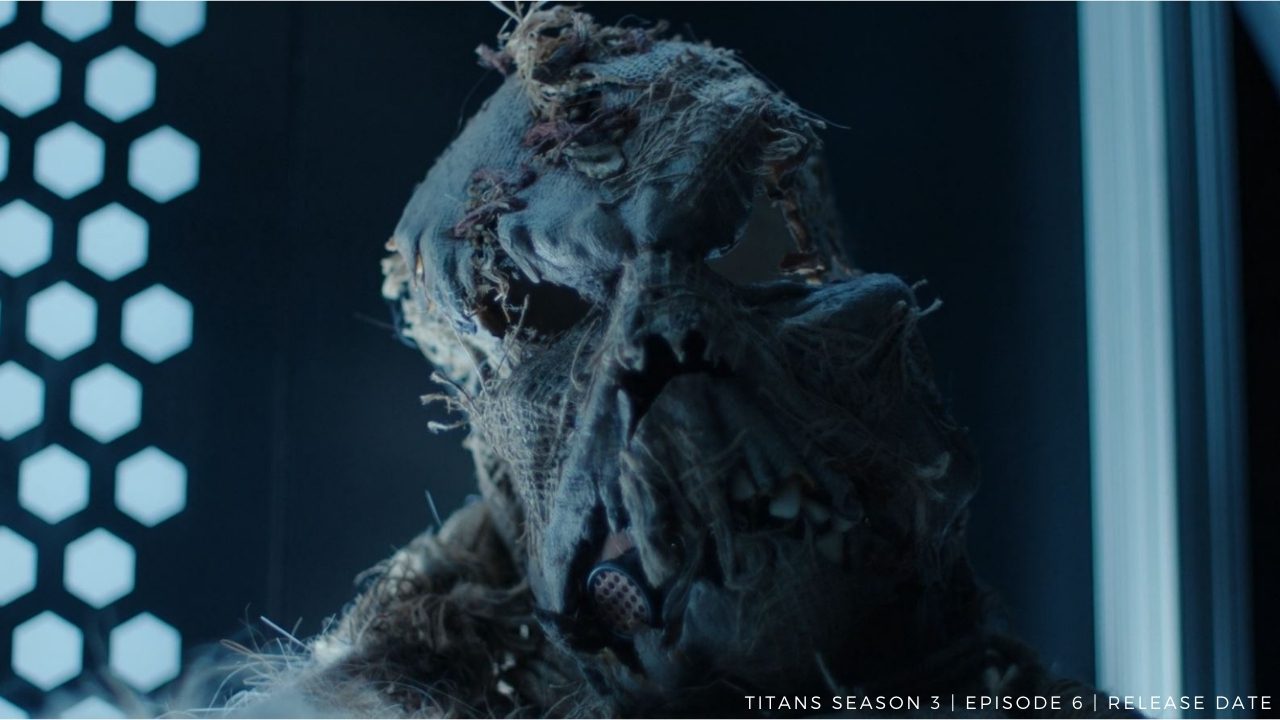 Titans Season 3 is soon about to return with its Episode 6. Previously, we saw how Jason Todd had gone back to Gotham. Here, he gets himself killed after he goes after the Joker alone. While the Titans grief him, Bruce tries to hide his feelings. But egged on by both dick and Barbara, Bruce crosses the line as he goes in Arkham Asylum as the Batman and kills the Joker with a crowbar. He leaves Gotham in Dick’s hands as he swiftly leaves. Then the Titans arrive all the way from San Franciso as they realize the threat Gotham faces in the absence of Batman and Robin. Now that both were gone, this team needed to function together to take down the bad guys. As they arrive in Gotham, Barbara informs Dick about the sightings of a mysterious new alias known as Red Hood.

Through Barbara, Dick learns about how the GCPD has the Scarecrow on a payroll as a consultant. He knows everything there is to know about the Bat-Family. Nightwing and the Titans try to take down the Red Hood when they find out that Red Hood is actually Jason Todd. He is not dead and is very much alive. Jason goes on to trick Dawn into killing Hank herself. The Titans give their all to save him, but a desperate move turns out to be the end of it all. Jason then attempts to get Scarecrow out of prison. Dick identifies this setup and kidnaps Jonathan Crane himself. He takes him to the woods, after which the Red Hood arrives to get him back. Meanwhile, Kori has been getting several visions of her sister Blackfire. She and Gar visit her and eventually rescue her from a facility.

Titans Season 3 Episode 5, titled “Lazarus,” solely focuses on Jason Todd, three months before the events of Titans Season 3 Premiere. We learn all about him after he leaves San Francisco for Gotham. He was very close to Rose and is haunted by Donna Troy’s death. He was having nightmares when Bruce forces him to go meet Dr. Leslie Thompkins to help him feel better. Leslie Thompkins is an old friend of Bruce, who knows everything about his work as Batman. While Jason does try to oppose the idea, Bruce stops him from being Robin if he does not get the yes from Dr. Thompkins.

Jason then goes and meets his friend Molly who has been worried about the kids that have recently gone missing. She found out that a guy working for the Joker was getting kids from the streets. This is when Jason decides to go and visit the guy. Here, the goon takes out a gun that scares Jason. Inadvertently, Jason gets beat up by the goon as Molly asks him to stop.

After this, he gets angry at Molly and leaves to seek help from Dr. Thompkins. Jason is unable to open up to Thompkins but instead learns from her that she was previously friends with Jonathan Crane. They were graduating together when she found out about Crane’s obsession with fear. Subsequently, Crane tried to silence her, but Bruce got to her in time. While going to Leslie starts showing progress, Jason starts feeling better being himself. But just then, Bruce decides to strip off Jason as Robin. This decision was made simply out of Bruce’s fear of losing him, but Jason felt that Bruce found him weak.

Remembering all that Leslie had told him about Crane, Jason decides to go pay Jonathan Crane a visit. He would offer Crane information about the Bat-Family if he were to help Jason create a toxin from him. Jason believes that if Crane was able to manufacture a fear toxin, he should also be able to create one that removes fear. Crane decides to help him as he pens him down formulas. Jason gets himself a room in which he manufactures the drug. He is successful as he is unable to feel anything. This was the same drug Jason used before he went to confront the Joker. The Joker kills him, after which Crane makes use of a solidarity Lazarus Pit to revive him.

Scarecrow starts introducing Jason with a toxin that would help him control him as the Red Hood. Red Hood then rescues Diego from the goon and returns him in the safe hands of Molly. She recognizes him, but Red Hood decides to leave without giving any explanation.

Titans Season 3 Episode 6 will be released on 2 September 2021. The official episode schedule for Titans has not been made public. Nevertheless, sources confirm that the next episode will be titled “Lady Vic”. The show premiered its first three episodes altogether on 12th August 2021. Subsequently, from next week onwards, Titans Season 3 has been scheduled for one episode per week. Each of these episodes has a runtime of about 40-45 minutes. Titans Season 3 primarily comes out on HBO Max. Here, the show releases its episodes at 12 am ET. You, too, could watch the episodes by Titans Season 3 as soon as they release, if you tune into the streaming platform, as soon as the time strikes internationally. So, be sure to check the above-mentioned time with respect to your local time zone.

Titans Season 3 is set for a total of 13 Episodes. This means that we still have a total of eight episodes left in this installment. While the network has always been quick to renew Titans, no news has come out regarding Titans Season 4.

Titans Season 3 Episode 6 titled “Lady Vic” could most likely focus on Dick Grayson/Nightwing. While the villain has not been previously introduced in the show, Lady Vic is known to be an antagonist to Nightwing. Being in Bludhaven has made Dick Grayson encounter his own foes, and it seems like Lady Vic is up to something. If we go by the comic books, Lady Vic’s true name is Lady Elaine Marsh-Morton. She is an English noblewoman who is semi-employed by Roland Desmond to complete any tasks. She works as an assassin, bounty hunter, and mercenary and primarily operates in Bludhaven. In Titans Season 3, Lay Vic is being played by Kimberly-Sue Murray. And in the upcoming episode, we will see what she can bring to the table.

In the last episode, we learned how Jason Todd came back to life. While we believed that it could be related to Ra’s al Ghul in some way, disappointingly, there was only a mention of him. But surely, we learned much more about the relationship between Jason Todd and Jonathan Crane. We learned how Jason came in contact and how the events of the season premiere transpired. Jason still seems to be a good person. Unfortunately, his actions have gotten too far. And the drugs that Scarecrow has been giving him have only made him worse.

Jason has already killed Hank, and it seems quite gullible to assume that the Titans would not want vengeance. But if they do learn about Jason’s circumstances, perhaps he may still have hope. After Jason initially acts against Batman in the comic books, he goes back to the Bat-Family as the Red Hood.

Where can you watch Titans?

Titans is available to watch on HBO Max. Titans previously only used to air on DC Universe, but after the introduction of HBO Max, the show has found a new home. Elsewhere, DC Universe is now an exclusive website for DC Digital Comic Books Subscription. While HBO Max has made shows and movies readily available for a consumer, the truth is that the streaming platform is not available everywhere. So, fret not, as only the third season of Titans is exclusively available on HBO Max. Other than that, Titans Season 1 and 2 are available to watch on Netflix. Additionally, Titans is also available in several Video-On-Demand services. Here, you could purchase or rent individual episodes or seasons by Titans. Titans is available for VOD on iTunes, Google Play, Microsoft Store, Amazon Prime Video, and VUDU.

Legends Of Runeterra: Everything About Beyond The Bandlewood