Titans Season 3 Episode 10 release date might be among the top searches right now on the internet. Especially after the mind-blowing and crazy episode of the series just showed us. The upcoming episode is going to be completely worth the wait for the fans and the viewers. The American superhero television series has been the topic of discussion on various social media platforms since it first premiered in 2019. However, the current season has accelerated that hype and popularity to a whole another level completely.

There is a good enough reason behind that exceptional jump in the fame of the series with Season 3. One of the main factors is that the developers of the series have ramped up the budget of the current season as compared to the previous two seasons. That has resulted in very high-level graphics and visuals in this season. Especially when the graphics and CGI were a big area where the series needed improvement. In addition to that, the storyline of the show and the way it is being directed has also gone up several levels. All these things combined have certainly grabbed a lot of attention from the new viewers and the old fans as well.

On the other hand, the series is already based on the characters of DC comics. Moreover, it even features one of the most iconic team-ups of superheroes in DC after the Justice League. Yes, that iconic team is none other than Teen Titans. Although not every character in this show is a teenager anymore, that is why the title only says “Titans”. We are now a few days away from the release of Titans Season 3 Episode 10. However, let us learn more about the series and take a recap of the previous episode as well.

Titans Season 3 Cast: Who Is The New Big Bad This Season?

The character casting is always on point most of the time when it comes to finding the right actors for certain roles. Similarly, “Titans” is no different from this fact and therefore it has an ensemble cast of really great actors in its roster. The main actors include Brenton Thwaites as Dick Grayson aka Nightwing, Ryan Potter as Gar Logan aka Beast Boy, Anna Diop as Kory Anders aka Starfire, Curran Walters as Jason Todd aka Red Hood. Furthermore, Joshua Orpin is Conner Kent aka Superboy, Minka Kelly as Dawn aka Dove, Alan Ritchson as Hank aka Hawk, Teagan Croft as Rachel Roth aka Raven, and Conor Leslie as Donna Troy aka Wonder Girl.

Then there are other popular characters as well like Bruce Wayne, Barbara Gordon, Jonathan Crane, and Blackfire. These characters are portrayed by Iain Glen, Savannah Welch, Vincent Kartheiser, and Damaris Lewis respectively. However, Iain is not a series regular as Bruce Wayne but is rather in a recurring role. On the other hand, the characters named Barbara, Blackfire, and Jonathan Crane are new additions to the cast this season. 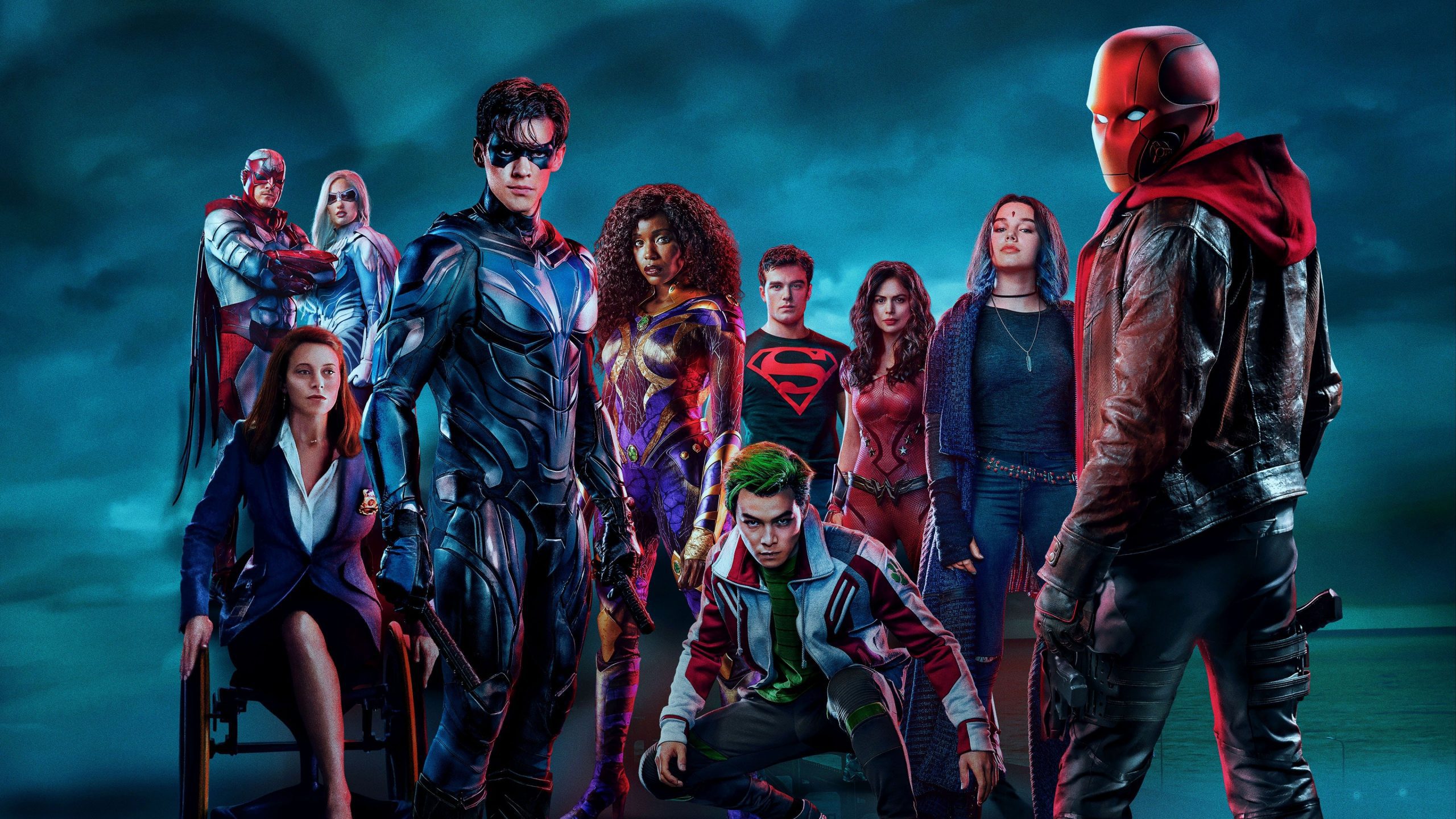 The Cast of Titans Season 3

In addition to that, Jonathan Crane who is also known as Scarecrow in DC comics is currently the big bad in Titans Season 3. Similarly, Jason Todd who became Red Hood in this season has also been a big bad for the Titans till now. However, things now seem to be changing for Jason as he might have realized his mistakes and might go back to his team. Although, the question still remains whether the Titans will take Jason back? Meanwhile, there might also be a chance of Blackfire turning out to be a villain by the end of the season. But we will have to wait to find that out.

Episode 9 of Titans Season 3 was released on 23rd September 2021 on HBO Max exclusively. In addition to that, the episode was titled “Souls” and went live at 3 am ET, and 12:30 pm IST. The episode instantly excited the fans when it began featuring Bruce Wayne. He was living at his other estate and had made up a “Will” to transfer his property and wealth in case of his death. This suddenly shocked the fans as it definitely signaled that he might be ending up life.

On the other hand, we saw the first proper look at Rachel aka Raven, and Donna Troy aka Wonder Girl. We also got a fabulous look at the home of the Amazons which is also known as Themyscira. Raven was present to take part in a ritual that was meant to try and bring Donna back to life. However, we saw Raven getting impatient with the Amazonian ways as she tried to use her magic to bring Donna back to life.

Although, she could not do it as was not yet that powerful. Moreover, she was also training with another Amazonian named Myrrha who was trying to teach Raven the Amazonian ways. It all seemed good but soon the actual craziness came to light. That is exactly what people want from a DC television series. We saw the soul of Tim Drake in the afterlife sitting on a moving train. That train was eventually taking him to his final destiny after death. Although he refused to do so and jumped from the train. Furthermore, Donna jumped after him. But how was she there and why did she go after Tim?

Did Donna Troy and Tim Drake Come Back To Life? Did Bruce Wayne Kill Himself?

Things got crazy when it all went to the afterlife, the pathway to death, or whatever you may call it. Tim did not want to die that is why he jumped off the train. Although Donna tried to explain to him, however, he did not listen so she jumped off as well to go after him and help. But things were not so easy when the soul eaters came after Tim and Donna and tried to kill them. So, the two decided to run away and got help from another person driving a car.

That person was none other than Hank. Donna was surprised to see him there but he explained to her how Jason Todd became Red Hood and blew him up. Soon they reached a safe place where he told her about Ghouls who were the soul eaters in the afterlife. Hank then told Donna that it was possible to leave the afterlife and go back to reality by crossing a certain bridge. But they were soon attacked by the Ghouls. However, Hank saved them by shooting Ghouls with a gun. It looks like one can get anything in the afterlife if one focuses on it hard.

Then Tim and Hank convinced Donna who was first not willing to come back to life, to go back to the real world. They found the bridge eventually and started crossing it. Although a huge number of Ghouls again appeared to kill them. However, they did not back down and fought them but Hank had to stay back and sacrifice his chance of life so that Tim and Donna can make it back. Both Donna and Tim came back to life. Moreover, Donna even rushed and saved Bruce’s life who had set his house on fire with him inside it in an attempt of suicide.

Titans Season 3 Episode 10: When Will It Release and What To Expect?

The ninth episode of Titans Season 3 has hyped up this season even more up to a whole new level. Especially with Donna Troy coming back to life, fans have gotten really excited. Titans Season 3 Episode 10 will be probably released on 30th September 2021 on HBO Max exclusively. Although there is no confirmation on the release date, it will eventually be the case considering the previous release schedule on HBO Max.

However, there can be a delay if the showrunners decide to take a gap in between. Especially when the season is at such an interesting turn. In addition to that, the title of Titans Season 3 Episode 10 is also not confirmed yet. But the episode will definitely go live at 3 am ET and 12:30 pm IST on a Thursday. The previous seasons are available to watch on Netflix for those willing to revisit or watch them for the first time. The next episode will be worth the wait and a definite watch. It will especially be a treat to see Donna join the Titans back and go after Scarecrow.

We will also if Grayson will take Tim into the team. Furthermore, Jason will have to prove his worthiness yet again for the team. Especially when everyone thinks that he set them up to poison Gotham city. Meanwhile, Bruce Wayne might learn that Jason is alive and has become Red Hood. That will be another interesting thing to watch. That is why we urge you to stay tuned with us for updates when the next episode drops.