Tinted With You Episode 7 is going to hit the screen soon enough. The South Korean BL drama series has stolen the spotlight 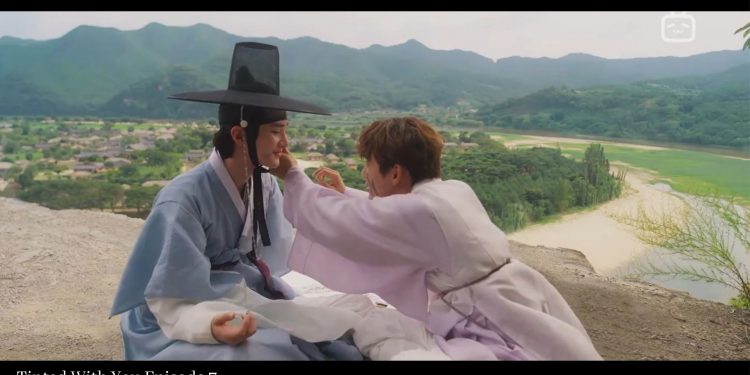 ‘Tinted With You Episode 7’ is going to hit the screen soon enough. The South Korean BL drama series has stolen the spotlight with its well-flowing pattern and amazing cast performance. With each passing episode, the viewership of the drama series has increased at a pleasant rate, and we can say that the show is going to be one of the kinds.

Romance, drama, and fantasy, the trio has been woven skillfully throughout the plot points and characters of the series. The results of the same have been overwhelmingly positive, and thus, the drama series is doing really well on all the strata of entertainment. Moreover, it is awe-inspiring to watch the story unfold in various folds and layers.

All the characters of the series have been heartwarming and quite peculiar in their own ways. Each of them has won thousands of hearts and undeniably has given excellent performance in each episode of the series. Furthermore, the chemistry between Heon and Eunho is the main attraction of the series, and therefore we are expecting the turn of events soon.

Here we have gathered all the details about the upcoming seventh episode of the show. Therefore, let’s have a quick peek inside.

‘Tinted With You Episode 7’: Spoilers & Recap

The growing closeness between the exiled prince and the boy from the future has left everyone feeling giddy. The show’s previous episode was all about them, and the viewers out there were fed with some quality time together. All in all, nothing can be any better than watching them spend time with each other while they share looks of love.

We saw Heon and Eunho going to the forest with their art supplies. They wander around the woods, and all the time, they are always super giggly, and we can see their looks filled with love and adoration for each other.

They finally reach a cliff from where they can see a clear view of the village down there. Sitting together, they start to paint the scenery ahead of them on the canvas. The scene is screams love and has successfully made everyone feel butterflies in their stomach.

And, all the viewers bust into “awwws” with big smiles on their faces when they finally KISS. It is all bubbly, giggly, blushy, and whatnot.

The scene changes, and we see a worried Geum pacing around the courtyard while anxiously waiting for the adorable duo to return home. It is already dark, and his worries can be seen in his actions.

In the upcoming episode, we might see the situation turning quite tricky for our adorable pair as Eunho starts finding a way to get back.

‘Tinted With You Episode 7’: Where to Watch?

Moreover, it is available for both domestic and international audiences. Once they are done with the procedure, they can easily catch up on the episodes.

‘Tinted With You Episode 7’: When is The Release Happening?

Tinted With You Episode 7 will release on January 13, 2022, at 8:30 PM. The BL South Korean drama series is very close to its final episode, and the audiences out there are excited about the same.

The cliffhanger from the previous episode has left everyone on an edge as Eunho asks Heon to come with him to the future. Everyone is anticipating and wishing Heon to say a “yes,” but we can never be sure of anything.

In most of the drama series, we are left heartbroken and in the pool of tears, and we are hoping that nothing much happens this time. Viewers out there have stacked up the internet with the same, and they are continuously rooting for a happy ending.

Moreover, with all the previous episodes, the show has gained an appreciative fan following, and the internet says the same.