Tinted With You Episode 3 is going to hit the screen soon enough. The BL drama has created a huge buzz on the internet. 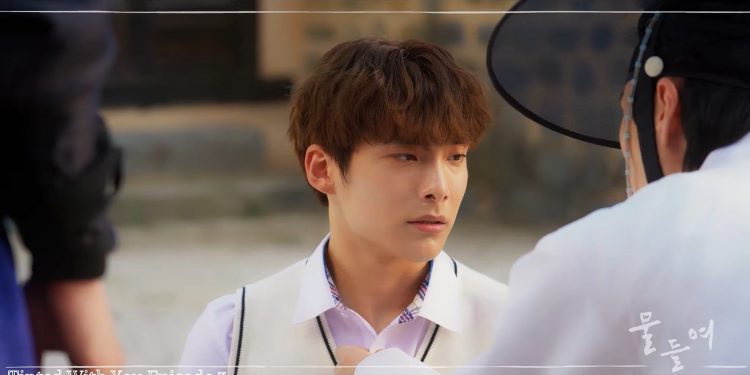 Tinted With You episode 3

‘Tinted With You Episode 3’ is going to hit the screen soon enough. The BL drama has created a huge buzz on the internet and scrolling through it, we can easily see the reason why. All the fans out there are pretty excited about the same, and their eagerness is visible everywhere on social media platforms.

With only two episodes, the show has captivated everyone, and the upcoming ones will do their magic too. It won’t be wrong to say that the show is going flawless, and the audience out there is loving every part of it. The mix of fantasy with romance is always a “BLAST,” and this time too, it has done its job effortlessly.

BL Romance has gained ground, and now millions of people out there are in love with the genre. Because of the same reason, this drama series, too, has gained huge viewership over a very short duration of time. Moreover, the kind of engagement the show has offered to all its viewers is pretty admirable in every way.

Many interesting events have happened in the previous episodes of the show, and many are yet to unfold in the upcoming ones.

Here we have gathered all the details about the upcoming episode of the show. Therefore, let’s have a quick peek inside.

‘Tinted With You Episode 3’ Release Date

‘Tinted With You Episode 3’ will be released on December 30, 2021, at 8:30 PM. The wait is going to be over soon enough, and we will have all the answers to previous cliffhangers. All the viewers out there are excited about the same, and we can easily guess the popularity of the series from the same.

Moreover, the visuals in the drama series have played a major role in attracting the viewers out there. The stunning beauty of the protagonists of the show is just HYPNOTIZING for everyone. Once you are inside then, there is no way you can get them out of your mind any soon.

So far, the drama series is following the regular release schedule, though if there are any changes made, then we will keep you updated about the same.

Where to Watch ‘Tinted With You Episode 3’?

The South Korean drama series has become pretty popular in all the arenas of entertainment. Therefore, the streaming demand for the same has increased a lot.

Viki is a reliable streaming platform for everyone out there. It is accessible for both domestic and international audiences out there. All you will need is a subscription, and then you are good to go with all the released and upcoming episodes of the show.

‘Tinted With You Episode 3’ Spoilers

A lot has happened in the previous episodes of the show. With EunHo sucked inside the world of painting and landing straight into the Joseon Era to Lee Heon developing a soft spot for him.

In the previous two episodes of the show, we saw major turns of events, and all of them left us both surprised and relieved. Of course, it was a hell of a lot of confusion for EunHo when he was sucked back in time. Opening his eyes, he saw Lee Heon with his bodyguard fighting the men sent by his elder brother to take his life.

Noticing EunHo, Go Geum steps forward, asking about his identity, to which EunHo replies that he doesn’t know where he is. Though, his answer doesn’t help in anything. He is attacked by Geum, which makes him step backward and fall back to an unknown place again.

Confused as anything, he starts screaming to no one in particular; and also starts considering that maybe everything is a dream or a bad prank. At the same time, we see a lady from the museum appearing there and telling EunHo about the painting; and how he is caged there to fulfill a purpose.

Geum finds EunHo again and takes him back to the cottage of Lee Heon. There he is questioned by both of them, which again ends on nothing. The duo stands confused as hell though they are clear on one thing that EunHo is not from this place and time.

Later, we see them asking EunHo to deliver a letter to his majesty, which is the cruel elder brother of Lee Heon. The scene is shifted to the night time where both the protagonists are having difficulty falling asleep.

EunHo joins the crown prince for a walk, and then they both get together fairly well. They talk about things, and later, he is informed that he can freely leave in the morning without delivering the letter. This surprises EunHo, and he forms a slight interest in the prince.

Later, in the preview section, we see a sleeping Lee Heon being approached by a shadow holding a sword in his hand. The audience out there is left in anticipation and revelation, which will happen in the next episode.

For the guessing part, is the shadow a new assassin sent by his elder brother?