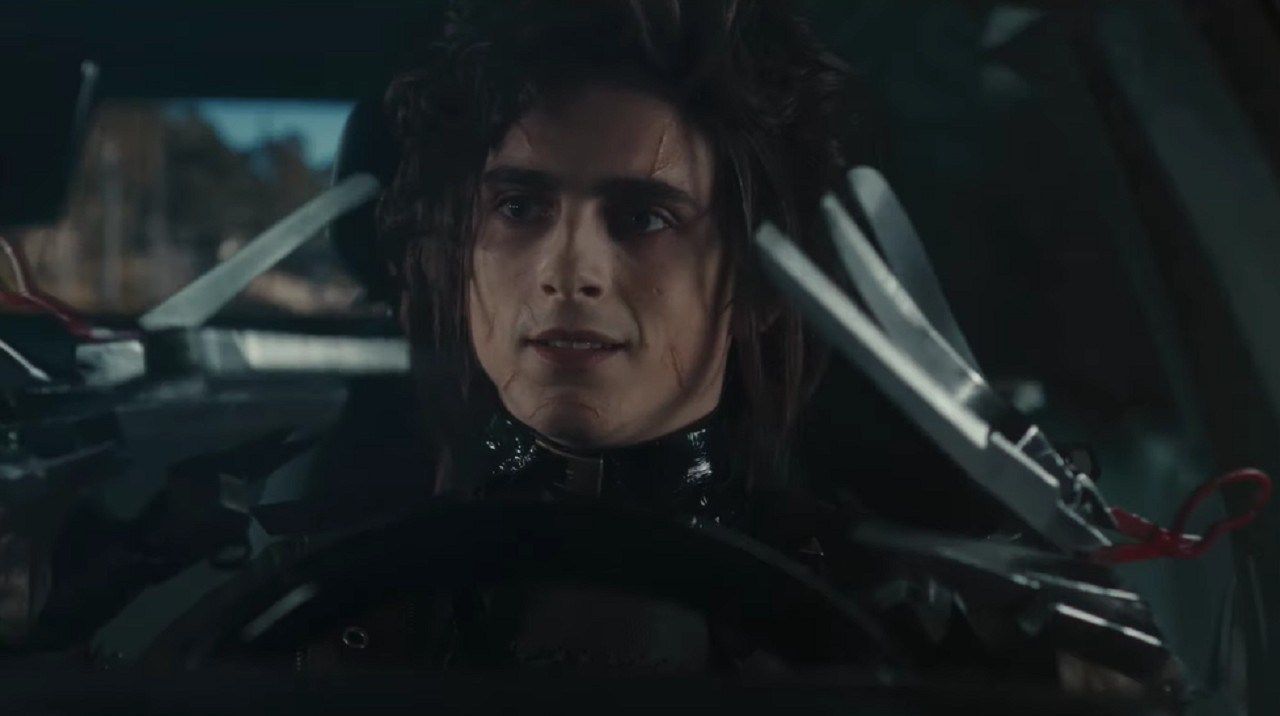 In the sequel concept to the Edward Scissorhands film, the character Edgar is told to have the same kind of hands as his father. This ad shows Edgar’s ability to use LYRIQ’s newest feature, hands-free driving, called the Super Cruise.

The interesting video showcased how Edgar Scissorhands is having difficulties in doing his day-to-day activities. Playing American football, getting on a town bus, and getting work done are things he can’t normally do. This, of course, due to his gigantic strange-looking hands that are inherited from his father. 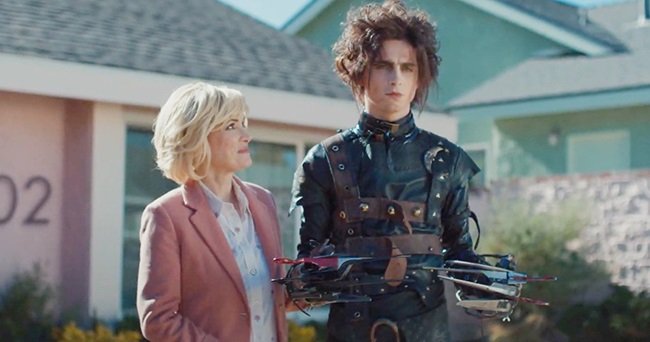 The character Kim was played again by actress Winona Ryder, who previously played the original version of Tim Burton’s 1990 direction. On playing Edgar’s mother, Winona said that it was surreal to see Timothee playing her son. Moreover, Ryder admitted to seeing Timothee as an extraordinary young man who is both talented and sweet.

Tim Burton, as film director Edward Scissorhands, praised the Cadillac advertising concept. “It’s rare to see work that you are proud of continuing to live and develop after 30 years.”

The release of this advertisement evokes fans’ memories of the Edward Scissorhands film released in 1990. In fact, not a few of them hoped that Timothée Chalamet could portray the character, Edgar, if there was a continuation of this film.

Viral Moment of Jennifer Lawrence and Timothee Chalamet During ‘ Don’t Look Up’ Filming. 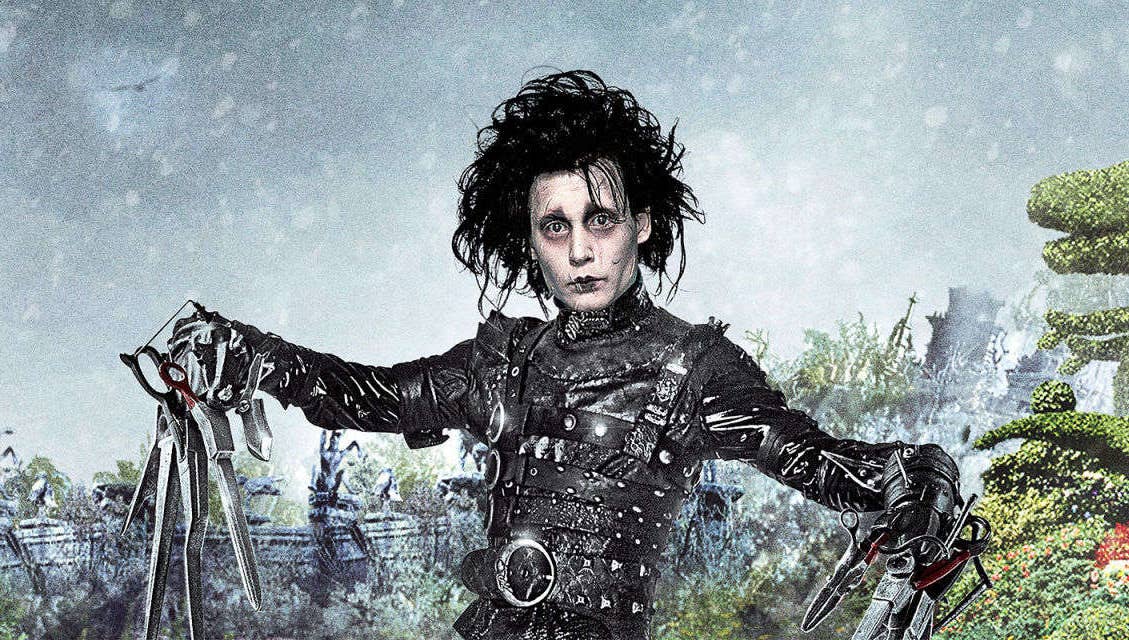 Edward Scissorhands film is an adaptation of the story of Tim Burton, who reaped success when released. The film also received several nominations at the Academy Awards, the British Academy Film Awards, and the Hugo Award. The story is about Edward, an unfinished artificial humanoid who has scissors for his fingers. The romantic side of this fantasy film is when Edward falls in love with Kim Boggs, who, unlike other people, Kim is not afraid when he sees Edward with his uniqueness. 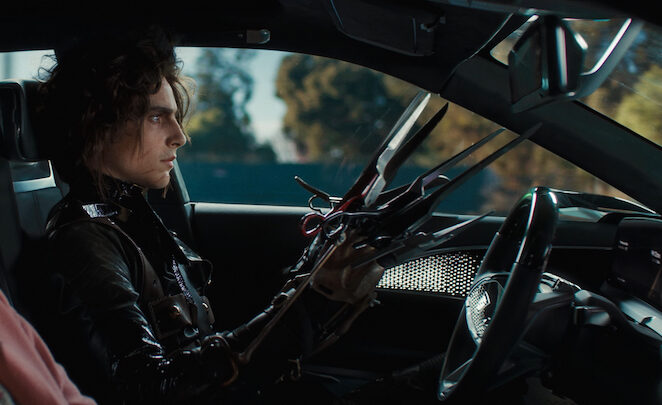 The actor who has played in the film “Call Me by Your Name” plays Edgar Scissorhands and Winona Ryder as his mother. Winona herself starred in the original film “Edward Scissorhands” opposite Johnny Depp.

Edgar Scissorhands is the son of Edward Scissorhands, the legendary fictional character in the fantasy romantic film of the same name that aired in 1990. However, his role this time was not for the sequel to the film starring Johnny Depp and Winona Ryder. Timothée played Edgar for the new Cadillac car commercial that aired on the sidelines of the Superbowl event as a tribute to commemorating three decades of Edward Scissorhands films.

If Edward is good at cutting hair with his scissors hands, Edgar sets his skill on cutting fruits in the kitchen. Edgar can chop pineapples at lightning speed for his mother, as well as create fruit salad with his fingers while working part-time in a restaurant. This makes his ability differ from his father.

“Edward Scissorhands is a film I admired growing up, and the opportunity to step into that world was a dream come true,” Timothée told Vogue after taking on this unique role.

Although not including Johnny, the ad tells Edgar to struggle with his “scissors” hand in his daily life. He has to face many of the same tribulations his father did. Starting from not being able to catch the ball to danger his surroundings when taking the bus.

The commercial opens with narration from Kim Boggs (Winona Ryder). She tells about the ‘oddity’ of his son, who has a pair of hands that resemble scissors. This makes Edgar encounter various difficulties in his daily life. For example, breaking the bell-rope on a bus, getting stuck on a fence, pulling magnets during lessons.

His difficulty reminded the audience of something similar to what happened to his father in the past. Unfortunately, Edward Scissorhands is not present in the commercial.

Seeing that her son is having difficulties in the environment because of his condition, the mother tries to make life easier for her son by giving her a new car. Not an ordinary car, this Cadillac LYRIQ turns out to be able to auto-pilot and makes it easier for Edgar to drive it without making himself feel strange because he doesn’t hold the wheel his car. Really sophisticated

However, the mother saw how happy Edgar played the VR driving game without doing any damage. With her, she gave her son a Cadillac LYRIQ as a gift.

Also read: Why Call Me By Your Name Book is Better Than The Movie.