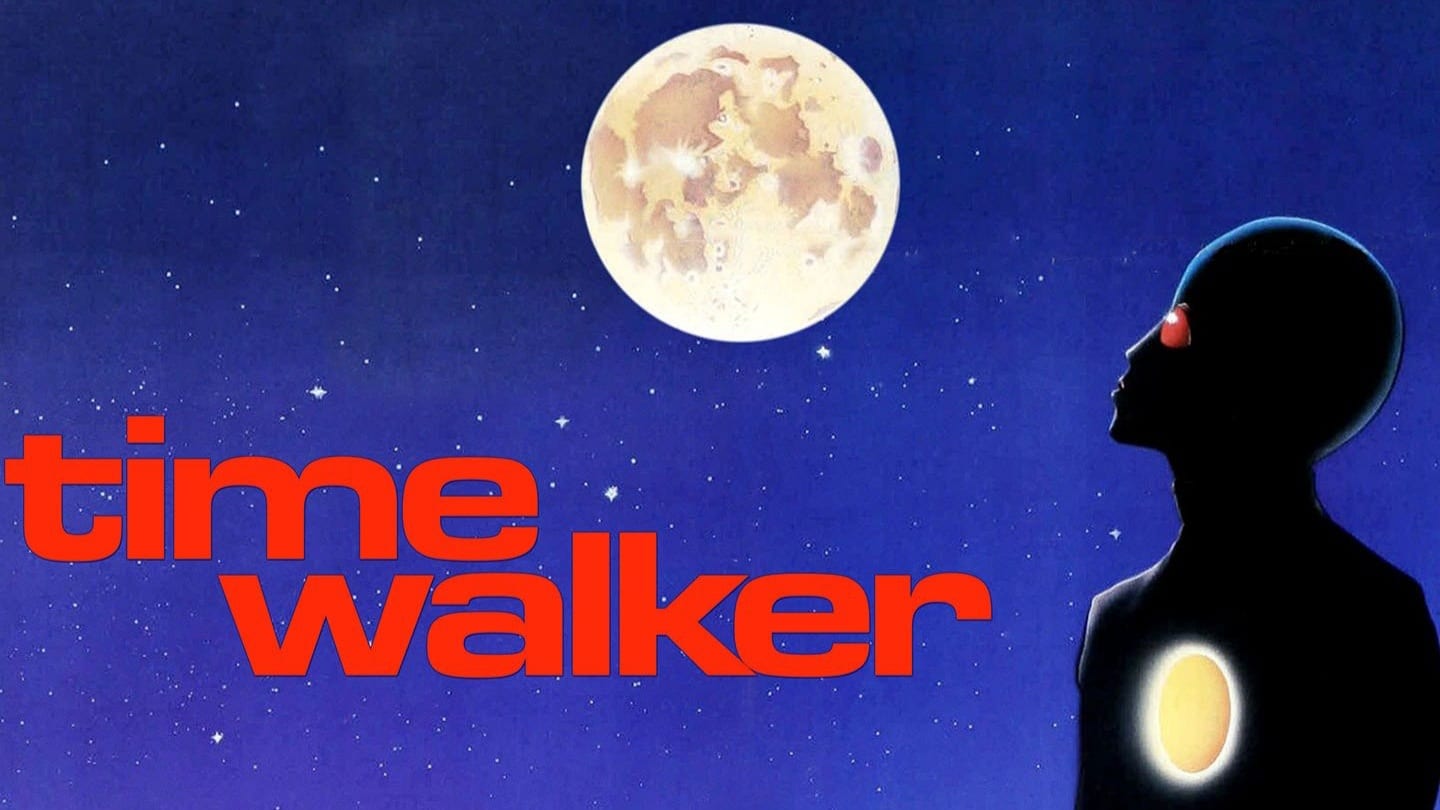 Time Walker is a sci-fi horror film revolving around an extracted mummy of an alive alien. The film hit theatres in 1982. Helmed by Tom Kennedy, the film revolves around an accidental discovery at King Tut’s tomb. Dimitri Villard and Jason Williams have produced the film. Tom Friedman and Karen Levitt penned the screenplay from the story written by Friedman and Jason Williams. The film stars Ben Murphy, Nina Axelford, Kevin Brophy, James Karen, Austin Stoker, Darwin Joston, Antoinette Bower, Sam Chew Jr., and Shari Belafonte. Richard Band composed the music for the film. Robbie Greenberg helmed the cinematography. The film was featured in Mystery Science Theater 3000 episode 405, under the title, Being from Another Planet. This sci-fi horror about a mummied extraterrestrial terrorizing a college campus hasn’t done that well critically. Before we jump onto the plot, let’s take a look at the cast of Time Walker.

The cast includes Ben Murphy, who plays the character of Douglas McCadden. He is a professor at the University of the Sciences. He leads the team exploring the ancient Egyptian tomb of Tutankhamun and discovers the sarcophagus containing the alien. Nina Axelford plays Susie Fuller. Kevin Brophy plays Peter Sharpe. He is a student at the university, and his actions kick off the conflict later on. When the sarcophagus arrives at the university, it’s Peter who examines the mummy with. X-rays. He also steals the crystals he finds around the head of the mummy. James Karen plays the president of the university, Dr. Wendell J. Rossmore. Austin Stoker plays Dr. Ken Melrose. He is Douglas’s colleague and also one of the first people to examine the mummy. Darwin Joston plays Lt. Plummer. Antoinette Bower plays Dr. Hayworth. Sam Chew Jr. plays Dr. Bruce Serrano. Shari Belafonte plays Linda Flores. 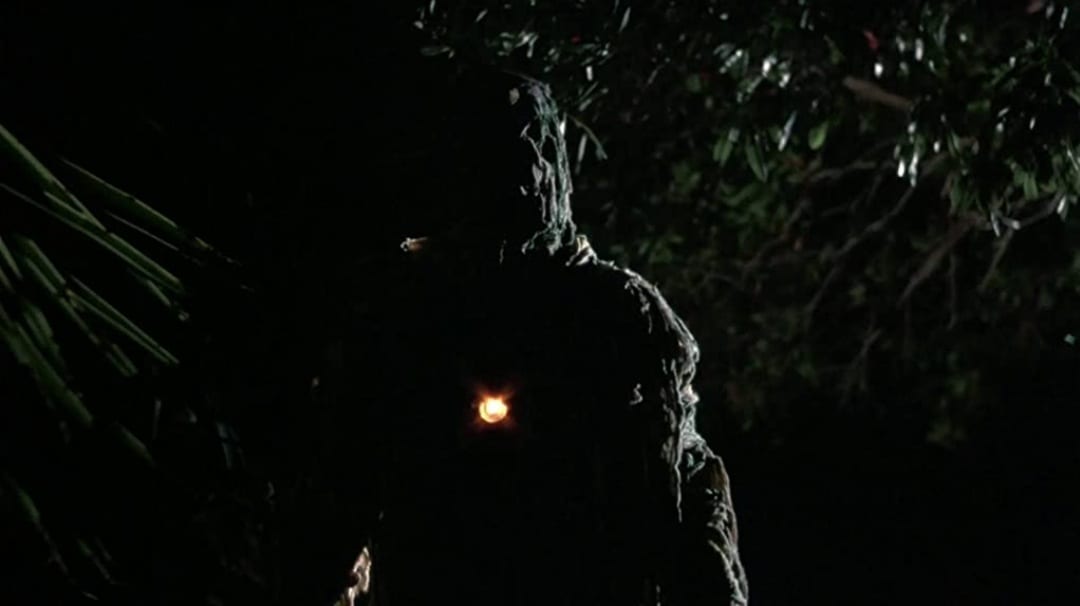 What Happens In The Film? Plot Synopsis

The film starts with Douglas McCadden exploring the tomb of the ancient Egyptian king Tutankhamun. McCadden is a professor at the California University of the Sciences. While exploring the tomb, an earthquake shakes up the surroundings and causes a wall to collapse. As the wall collapses, a hidden chamber comes to light. Probing inside the chamber, Douglas discovers a sarcophagus. And inside the sarcophagus is a mummy. Douglas is oblivious to the true nature of the mummy. It’s not a normal mummy-like one would presume. The mummy, as it turns out, is not of a long-dead Egyptian royalty. It is actually an extraterrestrial being. The alien is in suspended animation, a sort of hibernation. The alien was wrapped up and buried alive thousands of years before and covered with a dormant, green fungus.

The alien’s body is then brought back to California, and Douglas sends it for examination. He sends it to Dr. Ken Melrose for examination and also to student Peter Sharpe for X-ray. Following that, he takes part in a huge press conference regarding the massive discovery. Meanwhile, Peter examines the X-rays and finds that the body has five crystals around the head. That’s when Peter gives in to his greed and steals the crystals for himself. To cover up his act, he makes new X-rays and scraps the old ones. Following that, he sells four out of the five crystals he stole to unaware students. Peter’s act entails some heavy repercussions. It will, in time, turn into a catastrophe as the second wave of X-rays radiates the body too much. The radiation overdose re-invigorates the fungus, and the alien wakes up from suspended animation.

The following day, the press conference is held. One of the students touches the fungus on the sarcophagus. That’s when the fungus eats away one of his fingers. They then open the sarcophagus in front of the press. However, opening it reveals that it’s empty. The body of the alien has vanishes inexplicably. Meanwhile, Ken and Dr. Hayworth try to identify the fungus and find a way to destroy it. Everyone initially assumes that the vanishing of the mummy is a prank by the fraternity. However, Wendell Rossmore, the president of the university, has other ideas about who’s behind the incident. He blames Douglas for the theft of the mummy. The reason behind his play here is that he wants to make his hireling, Bruce Serrano, the director of the Egyptian department. Meanwhile, the alien is tracking down the students who possess the crystals to retrieve them.

The alien/mummy eventually tracks down the students who have the crystals. The crystals are a key component to the alien’s ticket back home. As it turns out, the crystals are key parts of a device. It is intergalactic transportation that the alien wants to start and get out of Earth. Consequently, the alien goes on a violent spree to retrieve the crystals, attacking the students left and right. The violent spree leads to a lot of dead students. When the alien brutally attacks a female student, Lt. Plummer is summoned to investigate the brutal crimes. With time, more and more students die or suffer injuries from the alien’s attacks. With more and more cases and bodies turning up, Plummer develops an idea about what’s happening. He thinks the cases are some serial killer’s doings. 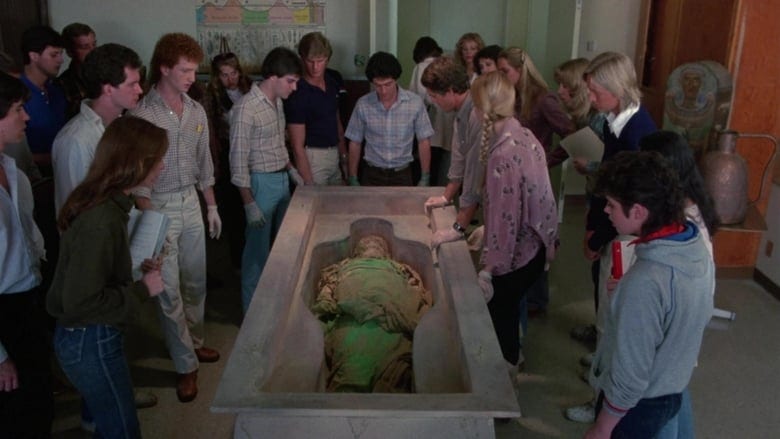 Confrontation With The Alien And Climax

Plummer continues his investigation, thinking he’s chasing some serial killer. Meanwhile, Douglas works on translating the hieroglyphic text on the sarcophagus, hoping it’ll reveal something important. After done translating, Douglas learns that the mummy is not what they all think it is. The text reads that Tutankhamun found an alien in a coma. Tutankhamun thought that the alien was a god. He, along with his servants, touched the unconscious body, and the fungus ended up killing them. Tutankhamun was then buried along with the alien in the king’s tomb. Douglas finally learns of the history of the mummy and its identity. He then also figures out the connection between the alien and the crystals. Following that, he tracks down the source of the entire hullabaloo — Peter. When Douglas confronts him, Peter admits that he stole the crystals.

Peter also hands the one crystal he kept for himself to Douglas. Towards the ending of the film, the climax kicks off at the boiler room. The alien has set up the transportation device in the boiler room. Douglas, Wendall, Bruce, along with two students and a security guard as well, all arrive in the room. The alien places the last recovered crystal onto the device, which starts it up. After that, we get to see the alien’s true form when the wrappings disintegrate. Bruce tells the security guard to shoot at the alien. The security guard goes for the trigger and shoots at the alien. However, Douglas jumps in front of the alien to protect him. Taking the bullet, Douglas falls. That’s when the alien takes the hand of an injured Douglas and vanishes along with him. Bruce grabs the remaining crystal, and it starts to destroy his hand.

Time Walker is a low-budget 80’s horror sci-fi that has a great premise to work with but fails to execute it properly. Although it does contain a lot of charm that the movies of the era had, it drags on for a long. There’s a lot of different elements in this blend of sci-fi and horror. The film even turns into a slasher later on. As Peter’s folly leads to the alien’s body receiving radiation, it comes alive. After waking from his slumber, the alien immediately heads off to locate his crystals. The crystals were the key for him to go back to his home planet.

Hence, to get back his crystals, he leaves a massacre in his wake. As he arrives at the Halloween party, we get the slasher part of the movie, albeit not a lot. There are several different aspects and genres mixed here. The slasher genre is not as much pronounced as the other ones. Although the film doesn’t really give justice to any genre, it strives for. There’s gore in the film, but not enough to warrant an adult rating. The film received a PG rating. There’s a little bit of nudity in the film, but other than that, not much to warrant a higher rating.

Time Walker Is An Enjoyable Watch For The Genre Fans

The pacing of the film is also an issue. It’s a slow-burn that builds up to a not-that-great climax. The sci-fi elements come to the front at the very end of the film. And the horror is not so scary. However, there is a chase sequence in the film that’s great. It is when the mummy chases Suzy through the corridors of the college campus. Despite a low budget of around $750,000, the film looks competent in its shots and cinematography. The low-budget aspect also adds to the charm of it all. Time Walker will impress the fans of the genre and indie movies of the time. Rating: We give Time Walker a 2 out of 5.

You can buy or rent Time Walker (1982) on Amazon Prime Video.