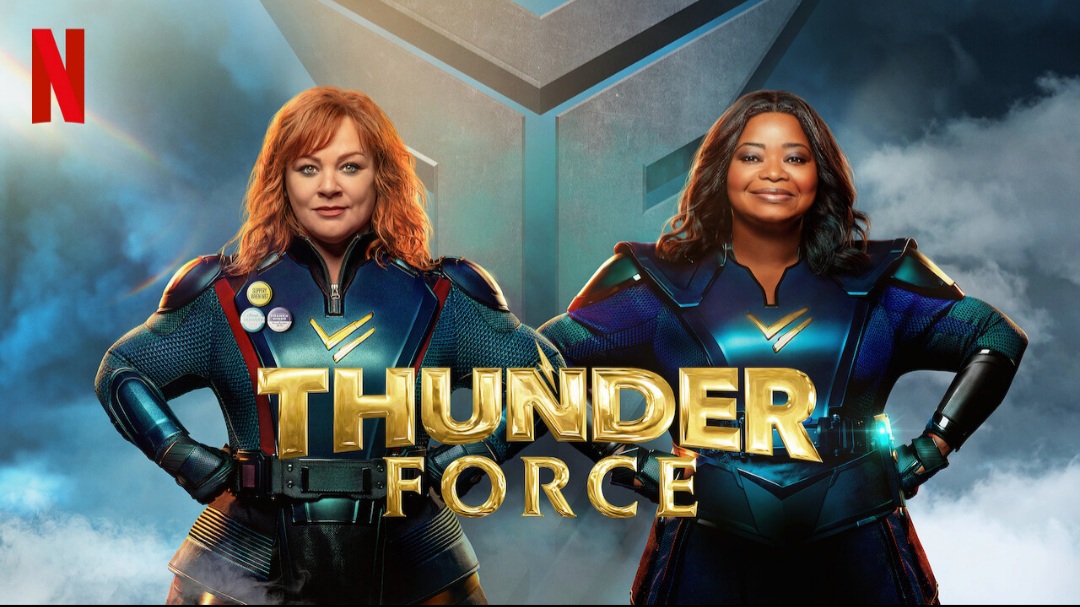 Thunder Force is a 2021 superhero comedy starring Melissa McCarthy and Octavia Spencer in lead roles. McCarthy’s husband Ben Falcone has written and directed the movie. The cast also includes Bobby Cannavale, Pom, Klementieff, Kevin Dunn, Taylor Mosby, Melissa Leo, and Jason Bateman. The film marks the 5th collaboration between Melissa McCarthy and her husband Ben Falcone. The couple has also produced the film along with Marc Platt and Adam Siegel. Music for the film is courtesy of composer Fil Eisler while Barry Peterson has handled the cinematography. Tia Nolan has edited the film. On the Day Productions and Marc Platt Productions have produced the film for the distributor and streamer Netflix. The premise revolves around two childhood friends who become an unlikely crime-fighting superhero duo. Thunder Force was released digitally on Netflix on April 9, 2021. 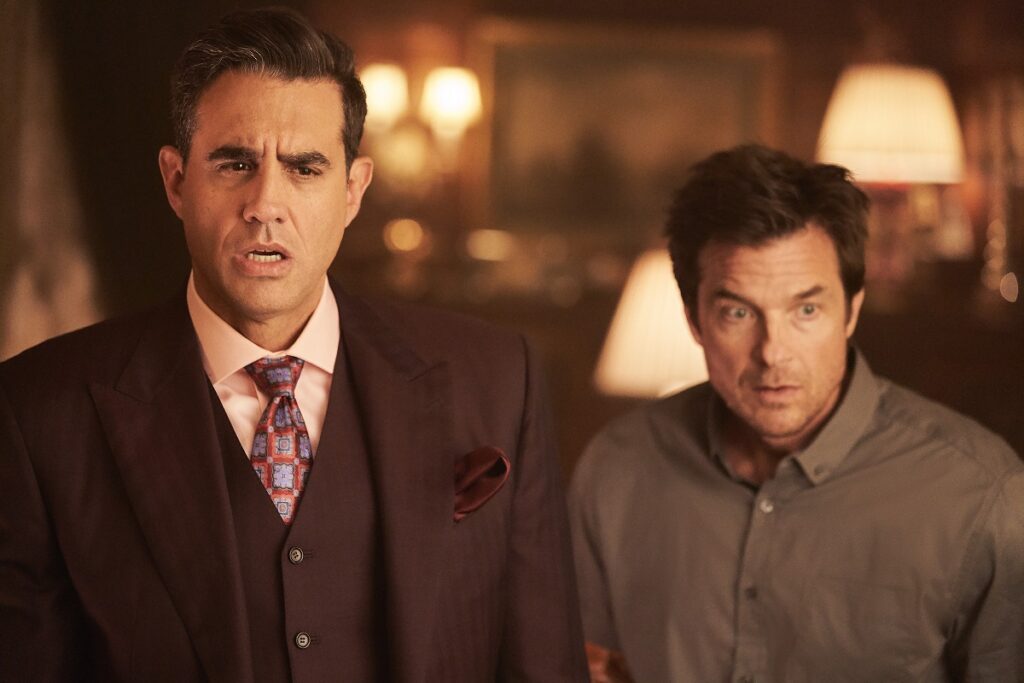 Bobby Cannavale as The King (Left) and Jason Bateman as The Crab (Right). Credits: Netflix 2021.

The film is set in current-day Chicago in an alternative timeline. In this world, a cosmic-ray blast in 1983 resulted in worldwide mutation. The ray rendered people into mutants with various powers and abilities. This also meant that criminals exposed to the ray became ferocious super-villains with deadly superpowers. These villains are called “Miscreants”. As they continue to wreak havoc, the ordinary people are helpless against their atrocities. We meet the leads Lydia and Emily, who are childhood friends that have been living apart for a long time now. While Lydia works a blue-collar job, Emily is a celebrated scientist, working on a superhero serum for years. After the two meet and get together, Lydia accidentally injects the superhero formula into her. The formula makes her super strong and then Emily takes another formula that makes the person invisible.

After getting their superhero powers, they start training and getting comfortable with them. Meanwhile, there’s a new mayoral race going on in the city. One of the forerunners is the evil thug called The King. He is the main antagonist of the film. He hires miscreants to get rid of competition or people he wants out of his way. Elsewhere, Lydia and Emily have embraced their superhero selves and go around fighting criminals. Eventually, they decide to go after The King. However, Lydia has another sub-plot going on with the half-miscreant name Crab Man. She is often in a flirtatious affair with him. Crab Man a criminal and switches sides frequently throughout the movie. He is a mutant but apart from having crab hands, he doesn’t possess any superpowers. Jason Bateman plays the character and has some of the funniest moments in the film. 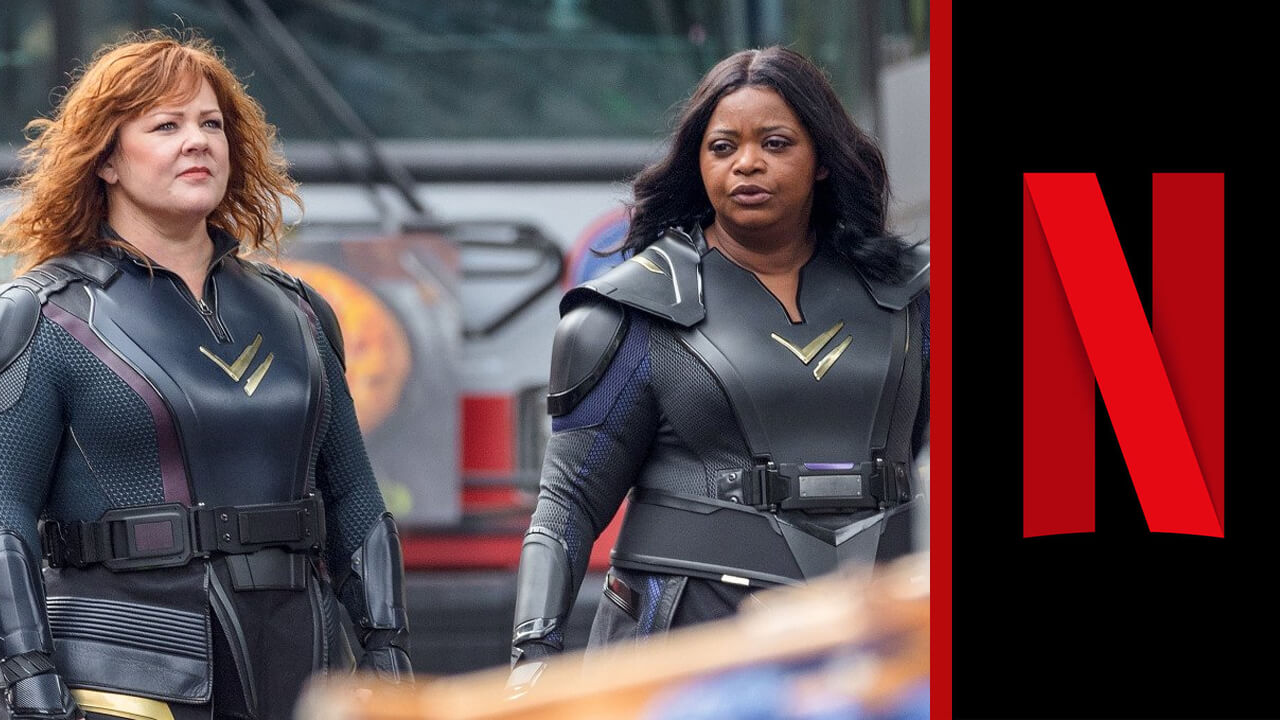 Thunder Force has reviewed generally negative reviews. The critical reception has been poor mostly because of the bland and lazy filmmaking. Many reviewers and viewers have noted how the film falls short of many things it could have done right. From comedy to writing to filmmaking — it fails to be competent in many aspects. It wants to be a superhero comedy and a family-friendly feature but it fails to do that spectacularly. The comedy in the movie is neither original nor funny. The supposed funny dialogues are downright terrible and very uninspired. It also tries to cram in progressive messages but the way the dialogues are written only does a disservice to them. The writing, in general, is just so very bad that you’d think a regular movie-goer would do a better job at it.

One of the egregious aspects of the movie is how it utterly wastes the talents of Octavia Spencer and Melissa McCarthy. Both of these actors are supremely talented and yet absolutely wasted in such a sorry excuse of a film. It is especially frustrating when it comes to Melissa McCarthy. She is way more talented and funnier than the movies she appears in. At this point, she has starred in so many unfunny films that waste her talents, I’ve stopped counting. Mostly it’s reliant on the improvisational talents of the actress, which can only work so many times. It’s high time she gets a good script, good dialogues, and a competent set of hands on the film set. This film has none of that. It’s one of those bad movies that are barely above the “so bad it’s good” genre movies.

If it were a movie like The Room, at least it would be watchable and fun even. But it’s not, and it becomes a pain and a matter of perseverance sitting through this film. It’s not just her, however, most of the actors in the cast deserve so much better than what they were given to work with. The writing is horrendous and the dialogues trying to be “inclusive” are just plain bad. The jokes do not work at all. It’s about as funny as any recent Melissa McCarthy film has been. This is the 5th collaboration between McCarthy and her husband Ben Falcone. And with the results, they’ve produced so far are the best case against collaborating again. Falcone has done a pretty bad job at both of the fronts. The working is terrible and the direction is unoriginal, bland, and unremarkable. 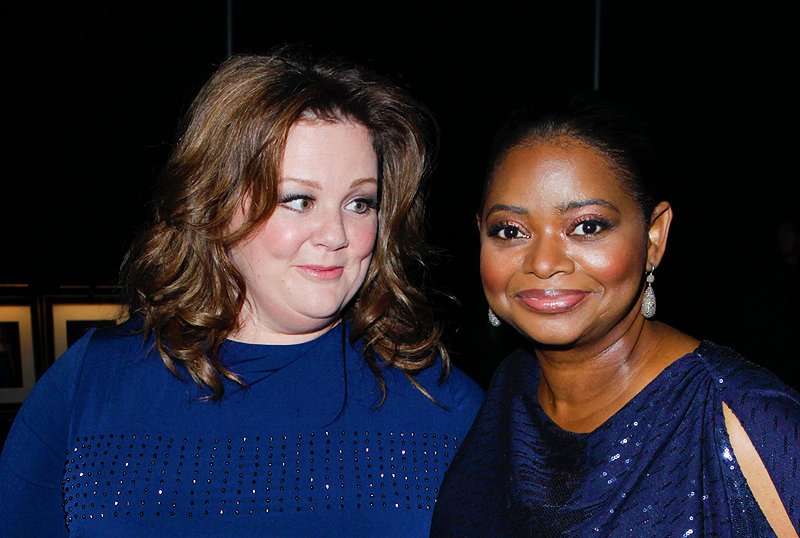 Thunder Force is a lazy attempt at cashing in on the current popularity of the superhero genre. And while many superhero movies are trying to do things better and better, this film has no plans like that. It merely adopts the trend to appeal to the larger masses. But it has no business with being original. And when you’re making an original superhero movie that is not based on a popular and established comic book, you have to be even more creative. You can’t expect to achieve success with half-hearted efforts at making a lousy comedy that tries to bank on the popular trend. This film lacks any sort of charm, even after having Octavia, McCarthy, and Jason Bateman in the cast.

Jason Bateman tries to be funny and make the most out of his lazily written character, but he can only do so much. And for the argument that this movie is trying to be a family time mindless fun, well, that doesn’t mean it has to be incompetent. You can make a mindless action comedy but there ought to be some comedy or action in it. I’m not sure if this film’s attempts at both of those even qualify to be called so. For a comedy movie, it’s worse than the Facebook minion memes, and for an action flick, it’s a bore. Even the costumes Octavia and Melissa wear look ridiculous — one of the few things that are actually funny albeit unintentionally. 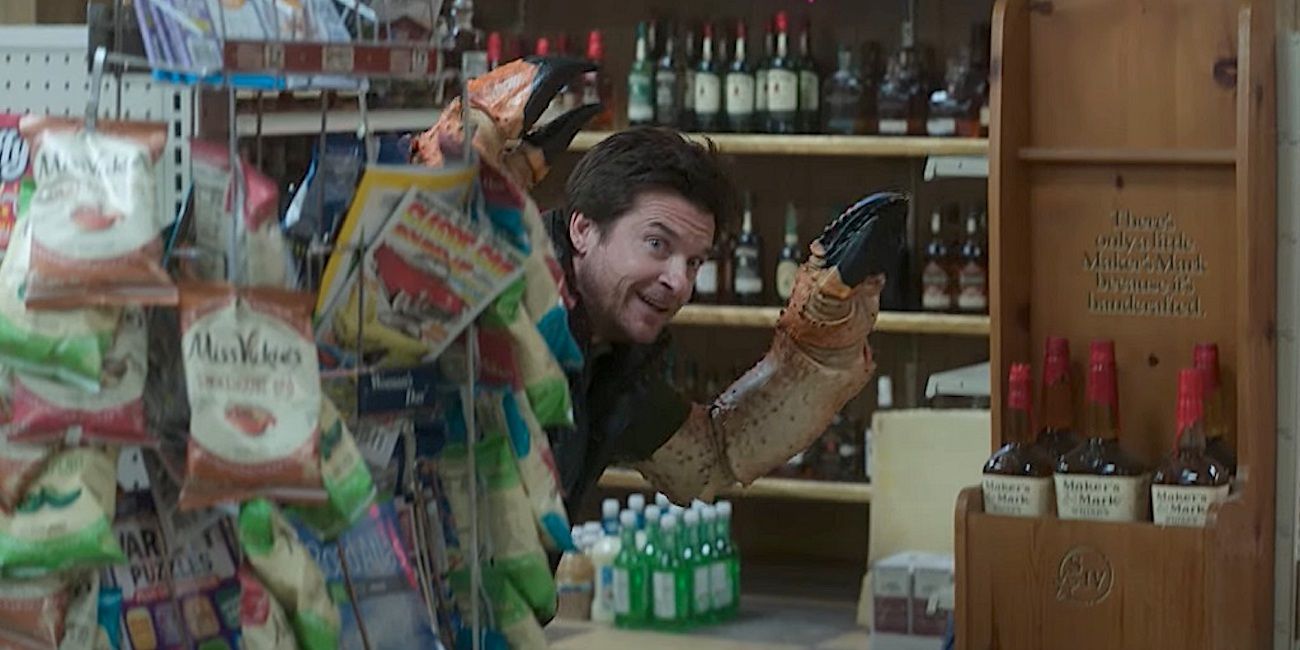 Bateman stars as The Crab, a criminal who flirts with Lydia throughout the movie.

Thunder Force is a major waste of studio money. Netflix has become very comfortable with shelling out money for awful movies with no plot or story. It’s a shame that such talents like McCarthy and Octavia have been wasted like this. It’s become a hobby for the Oscar-nominated McCarthy at this point, to star in Adam Sandler-type features. And when all of the collaborations with her husband have turned out so disastrously disappointing, she must contemplate a change in course.

Thunder Force is a blatantly unoriginal and unfunny film that fails in everything it sets out to be. I rate Thunder Force a ½ out of 5.

You can currently stream Thunder Force on Netflix.