Twists and turns mixed with affairs and mystery! Romantic thrillers save us when we find ourselves surrounded by the typical romcoms. Thomas Crown Affair is one of those movies. The previous statement might have offended some of the fellow Romcom or romance genre fans. But fellas, a little bit of suspense added to some sparky romance did no harm to anyone right!. So let’s get started, and don’t stop scrolling till you reach the end. As I am gonna tell you all about the gripping glossy glam romantic thriller of 1999, Thomas Crown Affair in this review.

To start with, the 1999’s Thomas Crown Affair is the remake of the 1968 film of the same name. Directed by John McTiernan from a  Leslie Dixon and Kurt Wimmer script, this purports to be a fabulous getaway with two fantastic lead actors. The sensual chemistry between  Brosnan and Russo adds to the nevertheless grandly entertaining storytelling. John McTiernan gives the viewers an intelligent “How Did he do that” story that generally plays fair with them. Consequently leaves them hanging to the edge of their seats.

Thomas Crown affair is a kind of movie that has mixed together Drama, Romance, Mystery, enacted by impossibly glamourous stars. The man behind the handsome face of Thomas Crown is Pierce Brosnan. Dennis Leary is detective McCann, Esther Cañadas as Anna, and Fritz Weaver as John Reynolds. Catherine Banning is portrayed by Rene Russo. Brosnan was an excellent actor in this one. No one else could have portrayed the role of a charming billionaire better than him. Russo for her part is pretty amazing and stunning. She brought such depth to her characterization that we are captivated by her. Some top-notch contributions and an amazing soundtrack from composer Bill Conti and Jack Eskew resulted in the earnings of $124.3 million worldwide. 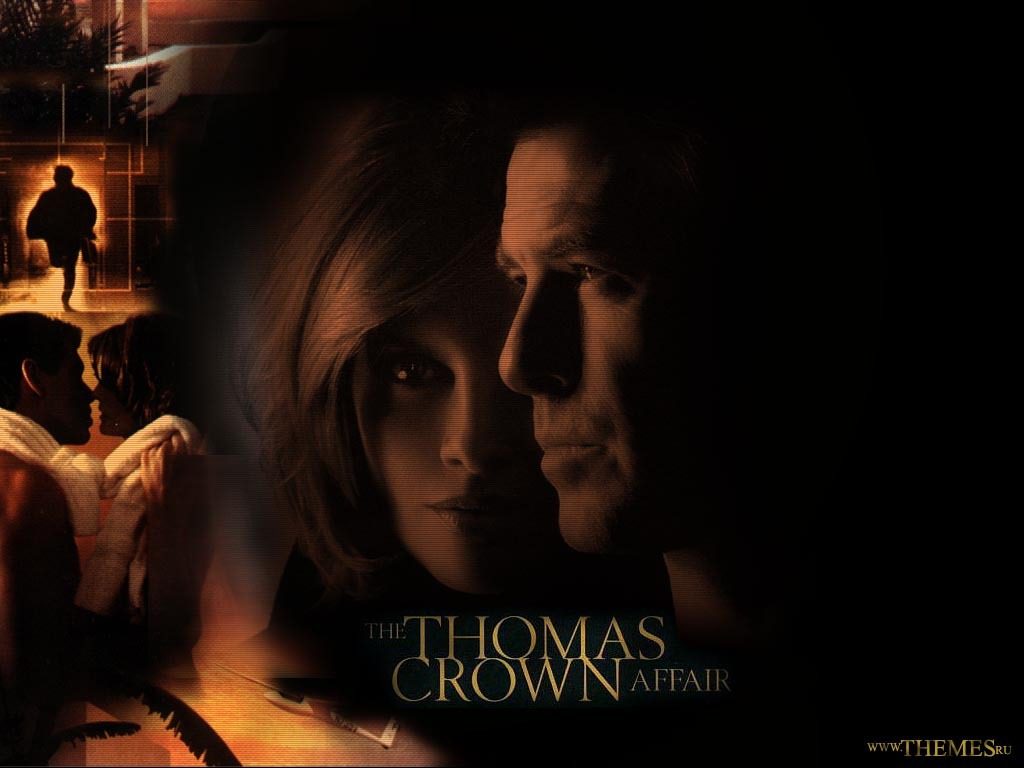 Plot: Crown, the heist and the Insurance Investigator

The film opens up with the main protagonist Thomas Crown being questioned about some life stuff by an anchor. Followed by pretty confusing opening scenes, the story, after a few moments, moves along pretty quickly. Thomas Crown, who is bored of his lavish daily life, steals Monet’s painting of San Giorgio Maggiore at Dusk, a 100 million dollars artwork. An NYPD detective Michael McCann with the other protagonist of the story, and Insurance investigator Catherine Banning investigate the robbery. Crown is suspected by Banning as the billionaire donates another painting to the museum to fill up the space of the stolen artwork. Followed by some suspicions and perspectives, Crown invites Banning to dinner.

At the dinner, Banning shows a specimen of her intelligently superior detective brain. She gets a copy of Crown’s keys made for herself. Banning and her team searches his house, and the Monnet is discovered. Everything was going just fine for Banning, but a twist has been planted here. The Monnet happens to be a taunting imitation of the original one. Banning is really pissed at this, and she challenges Crown. The series of events successfully manages to arouse something between them. And here began the sizzling affair between the two main protagonists of the story.

Thomas Crown and Banning: The affair

After spending a passionate night together, Banning gets to know that Crown is with another woman, Anna. That revelation leaves Banning confused about her feelings for Thomas Crown. Later Crown in order to make banning believe that Anna and Crown have nothing going between them, offers to return the Monet giving Banning a place and time to meet. Banning spills this all in front of McCann, and the next morning police await the arrival of the heist’s mastermind Thomas Crown. Amidst some revelations and turning events, Crown manages to flee after setting off the Museum’s sprinklers. The real Monnet is revealed after the sprinklers wash out the painting donated by Crown. 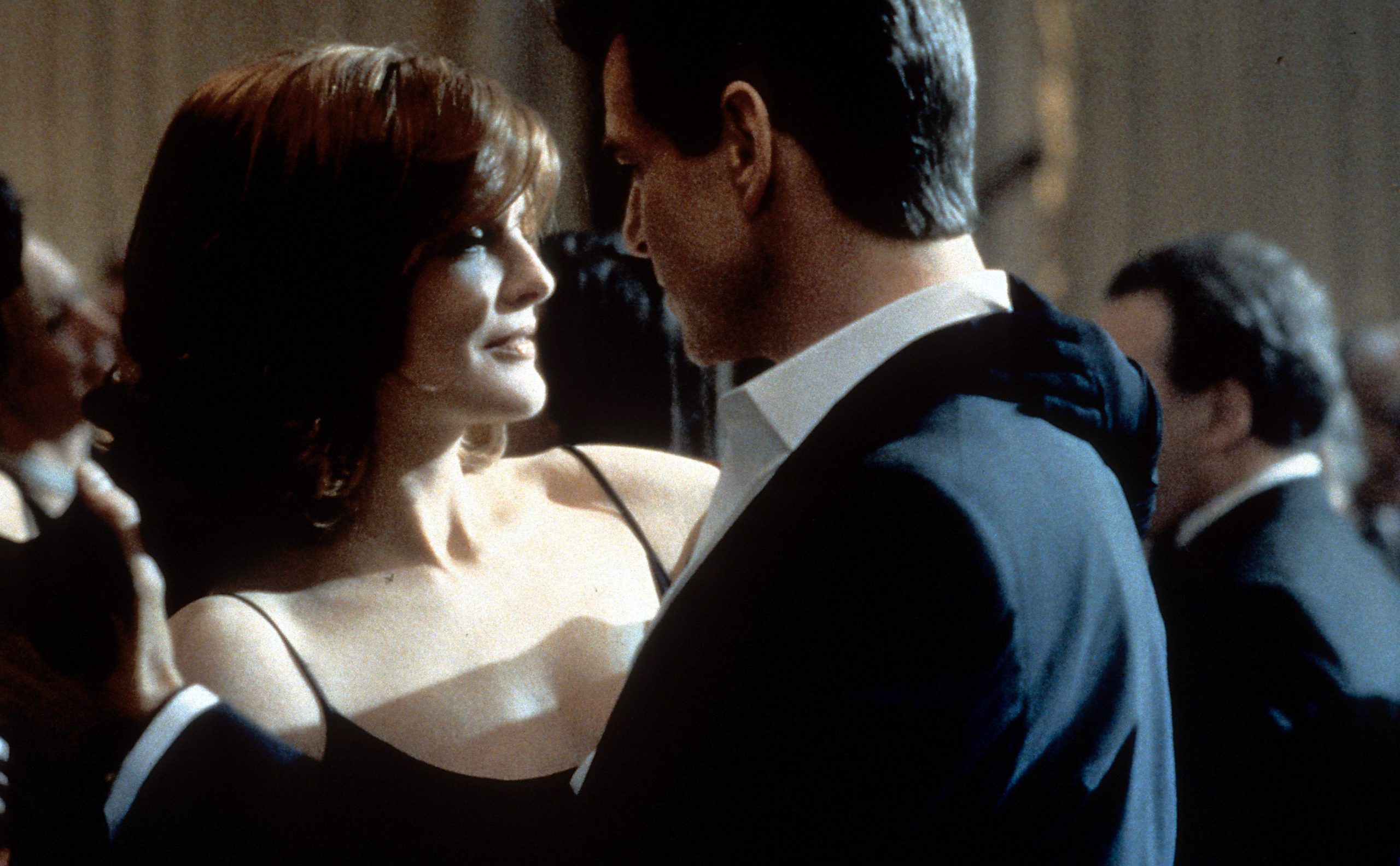 Pierce Brosnan and Rene Ruso in the movie

That’s it?. No!. It is a suspense thriller remember?. Now Crown has fled with another painting. And Banning and the Investigators are left with another missing painting. What about the love story?. Well, true love always finds its way back. On her flight back to London Banning finds Crown sitting behind her. And here ends the Suave, classy, interesting, and fast-paced Romantic thriller. With the immensely appealing cinematography and the glam, scenic beauty this one is a highly recommended romantic thriller for an evening flick!.

Also Read: 10 Thriller Movies If You Liked The Little Things