It seems like Nathan Jr. won't be leaving Kate anytime soon and he continues to get on her nerves. 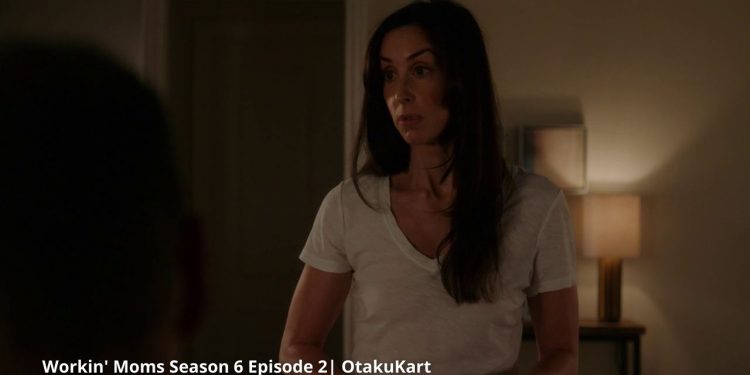 Workin’ Moms Season 6 hasn’t started on a great note for Kate at all, and this may become more evident in Episode 2. So, where are we even starting? Kate came to find that Nathan have a son with an ex for the past 15 years. Even Nathan didn’t see it coming. Well, this surprise came walking into Kate and Nathan’s house looking for Nathan. Apparently, he has been living with his mother for all these years and now wants to live with his father.

So, Nathan doesn’t seem to have any problem adjusting. They both are completely alike, so that’s obvious. The one having a problem is Kate. She realizes that this stepson of hers is not here for some happy time with his father. He is messing with her and wants to drift Nathan away from her. At least that’s what she believes. If things at home weren’t enough, Kate also had a bad day at work. From Sloane abandoning Kate to a new client rejecting her offer, here is everything that went down in the premier of Workin’ Moms.

Previously on Workin’ Moms, we picked right where we left off. Nathan’s son of an ex coming home to find his father. Kate is the most worried, and there is a chance he could be moving in. Nathan assures to do a DNA test soon, but the obvious behaviors of both Nathan and Nathan  Jr. tell a lot about it. Letters from the ex also tell a lot about Nathan Jr. Slowly and steadily, Kate starts realizing he is messing with her and trying to drive her and Nathan apart. This intuition comes from an erotic picture of his mother and Nathan, which he put up on the fridge.

Apart from all of this, Nathan Jr. also tries to involve himself in the family. He pitches to pick up the kids and also takes permission to put his pet frog in the fridge to induce hibernation. Meanwhile, Kate also has a bad day at work when she is late to meetings, thanks to Sloane punishing her. While Kate does return before the client could leave, she doesn’t realize this client likes when people agree with her. When Kate tries to pitch her ideas, they decide to back out.

Returning home is just worse for Kate, she finds all her pictures with Nathan messed. She believes Nathan Jr. is the one who stuck all his mother’s pictures on her face. Anne advised Kate that he is just a kid and Kate should show some compassion for what he is going through. So Kate decides to go by impressing everyone by cooking Moussaka.

Things take a rough turn when Rosie calls Kate amidst cooking. She informs the client who rejected them wants to give them a second chance. Handling the call at the same time as cooking saw Kate accidentally put Nathan Jr.’s pet frog inside the oven. This led to the frog’s unfortunate death. Although Kate got the deal, Nathan Jr. ran away from home. He later returned and made up with Kate by gifting her a necklace. Again with his mother’s picture inside it instead of Kate’s. The episode came to a close with Nathan Jr. also stealing her bed to sleep with his father for the night.

Workin’ Moms Season 6 Episode 2 is releasing on 11 January 2022. It is titled “Warm Lunch”. The official synopsis of the episode suggests that Kate’s suspicion that Nathan Jr. is messing with her continues. She once again opts to go to Anne for advice. But this time, it’s not Anne who will be helping her, and it comes from a surprising source. Lastly, it seems like Kate and Sloane may finally be reuniting with a promising book proposal.

Also Read: New Amsterdam Season 4 Episode 12: Desperate For Getting Back To Work?

Does Evie Frye End Up With Henry Green?