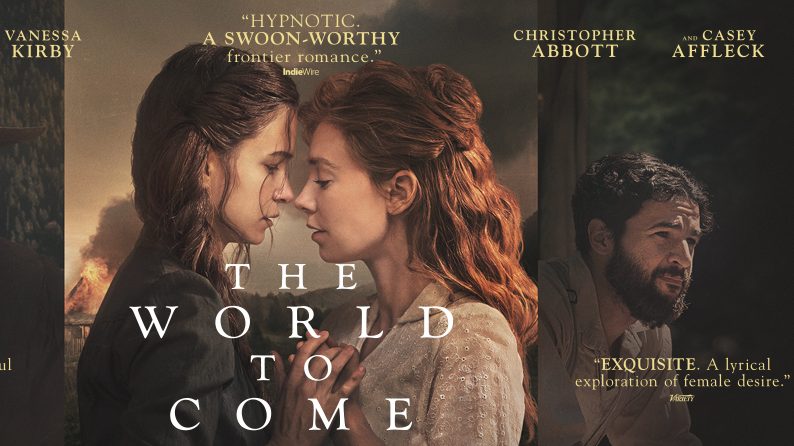 The World to Come is the 2020 drama film based upon Shepherd’s story of “The World to Come”. The Mona Vastfold directed film starring Vanessa Kirby, Katherine Waterston, Christopher Abbott, and Casey Affleck. The film took place along the mid-19th century in American Northeast about a love story that’s so appealing and fascinating to the audience.

The movie’s name ‘The World to Come’ itself elaborates on the simple storyline, describing a sorrowful story, where lovers get separated by the society conspiring against them and their destiny.

A brief overview of the storyline

Abigail, the protagonist of the film, is a farmer’s wife. She and her husband Dyer was suffering for their young daughter, Nellie, who lost her life. After her death, they were devastated and started losing the connections they had between them as a married couple. Similarly, another childless couple arrives in the same locality. The two women became friends, and slowly their friendship grew deeper with time. Abigail confessed to Tallie, the woman who became her friend, that her marriage with Dyer is unhappy and there is nothing but practicality in it, without any romance. On the other hand, Tallie opened up about Finney, her husband, who is ornery, mean, and controlling.

Dyer, who was already grieving at his daughter’s loss, became more upset and insecure when he felt his wife’s attention is on another woman. Finney gets equally jealous about the fact Tallie spending more time with Abigail. The burning jealousy that crept inside them is the result of the blooming love among their wives and also turns into a sexual affair.

One day, Finney invited Abigail and Dyer to dinner and turned the situation uncomfortable by asking them about their daughter, who is no more. That day, Abigail notices bruises on Tallie’s body and starts doubting things. When Tallie didn’t visit Abigail for over a week, the doubts take a turn, and she visits her house only to see a handkerchief covered with blood left behind, followed by a letter by Tallie which states she moved 85 miles away.

Abigail sensing mischief and insists her husband accompanies her even he was reluctant. Unfortunately, the time they reach there, Tallie was dead, and Finney states that she suffered from Diptheria.

As Abigail and Tallie started being friends, they could feel something that they weren’t supposed to feel. They got attracted to each other’s personalities and admired them. 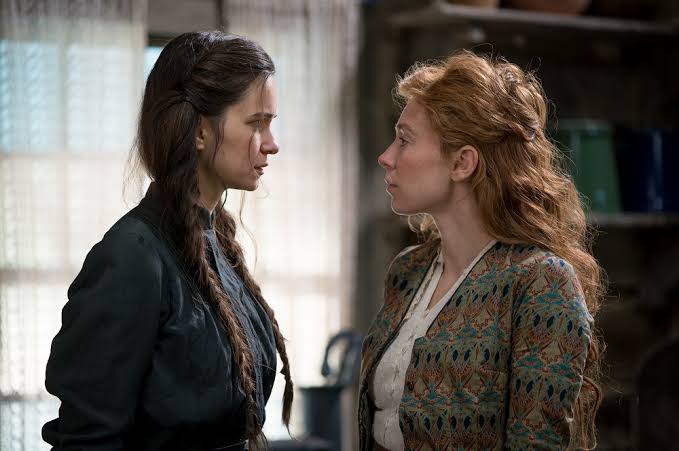 “It’s been my experience that it’s not always those who show the least, you actually feel atleast.”

Tallie gives Abigail an Atlas on her birthday that she always wanted. One day while returning home, struck by a storm, she nearly gets killed. But after few days, she continues to visit Abigail. And Tallie confesses to Abigail that all she dreams of is being with her. Abigail accepts it and says that she felt the same all the time. This confession turns the friendship of two wives struck in an unhappy marriage into romance and leads to kissing and eventually having a sexual affair between them.

Through things look peaceful and sweet at the moment, things take an ugly turn as their fate started to unfold, and everything gets destroyed.

After finding out about Tallie’s death, Abigail broke down. She returned to her old life and continued farming with her husband. But, her feelings about Tallie didn’t change, infact, she grew stronger. She and Dyer got more distant and did not live like a normal couple.

To rescue the reality and the pain that keeps on roaring in her heart, Abigail starts imagining murdering Finney to take revenge for hurting her beloved Tallie when she was alive. And she pictures her dead daughter and Tallie, casting-and they are comforting each other in the other side of the world they are living in.

The portrayal of the characters and casting

Abigail is played by Katherine Waterston, is an intellectual and kind person, and she finds happiness in writing and uses it as an escape. From her journal, she opens up about her feelings and clears about her endurance of pain and hardship and her everyday duties to bake bread, milk cows. Katherine is a skilled actor, and she added perfect emotions to her role and made it seem real. Tallie, played by Vanessa Kirby, is a bold and independent woman, which attracted Abigail more towards her. Their cute love gestures such as stealing glances, intense grazes, smiling, exchanging gifts, foot massages, love confessions, and kisses. Their chemistry was nice to watch. They continued with their romance, knowing about the consequences of it when their husbands get to know.

Dyer, Abigail’s husband, played by Casey Affleck, is reserved to speech, secretive, and not good at showing emotions. He mourns at the loss of his daughter and could feel distance grow up between him and his wife. He is a tender guy, in total contrary to Tallie’s husband, Finney, played by Christopher Abbott, who is a patriarch and mean man. He was terrifying and abused Tallie, as he could sense the attraction between his wife and the other woman in his neighborhood. He is a violent person and a prig. His selfishness with a steak of sadness in him makes his character dark and adds more, intensifies the story’s turn.

Both of them emerge as unideal husbands, which led to the dissatisfaction of their wives and searching for happiness in other things.

Direction and production of The World to Come.

The film is directed by Mona Fastvold, adapted from a screenplay by novelist Ron Hansen and Jim Shepard, which was earlier done from Shepherd’s book. The director of the film stresses over the fact of the misery and inferiority of women in our society in old times that is prevalent even at the present time. The film is produced by Pamela Koffler, David Hinojosa, Casey Affleck, Whitaker Lader, Margarethe Baillou.

The cinematographer, André Chemetoff, beautifully shows the domestic tension and blends the cold climate in rural New York, and sets the perfect mood for the film and the audience. Additionally, the background music and the tracks are soothing and go well with the scenes. The music is directed by Daniel Blumberg.

Critics review and the impact to its audience

The scenes of the film are in Venice, and the setting of the film is beautiful. Nature is portrayed as a wild element and has control over the story’s characters’ lives. There are a few scenes where the main characters are seen to make love under the open sky. The Ron Hansen & Jim Shepard screenplay is based on the original story, and in the ending, the audience feels sad because of the heartbreaking fate of the lovers. The cinematic shifting in the movie scenes matching the internal moods of the characters is unbelievably mesmerizing. 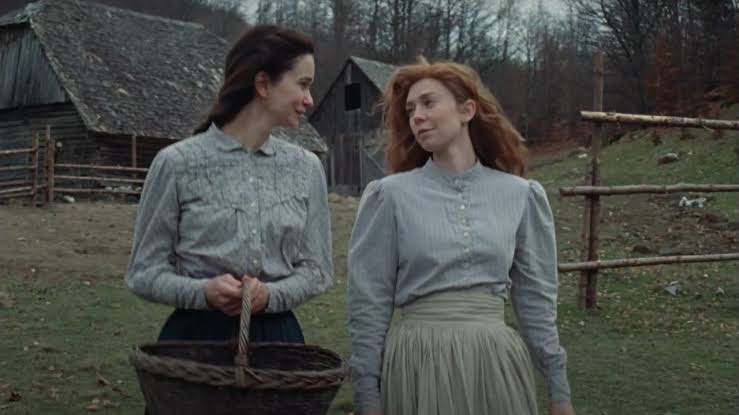 The story takes place in mid 19th century in rural New York, the patriarchy that exists here is harsh. The women are the center of the story, and it brings light to women’s suffering, and their only job is to serve their husbands without giving a thought to their own dreams and ambitions. The women were like caged birds, and them falling in love are described as two birds singing in a cage.

The film’s fascinating and graceful images and the actor’s performance made the film connect to their audience. Their visual presents of the women make it more admirable and dynamic.

The beautiful storytelling of the director makes The World To Come dramatic in a sense. The dialogues used in the film are poetic and delivers a lot of emotions. Tallie is a radiant and more of an audacious person, and her dialogues are touching and courageous. The voiceover of her character seemed a bit off, according to the character. The movie gets stronger by the presence of the women’s powerful romance and serves as an exploration of women’s desire. The movie has its own magic despite its flaws. 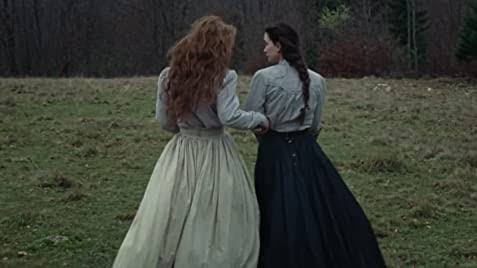 The film received Queer Lion Award for the best LGBT-themed film in the film festival. And had its World premiere at 77th Venice International Film Festival. My rating for The World To come is 3.5/5.

Read: The Professor and the Madman Review