The World Ends with You The Animation Episode 4: Preview and Recap 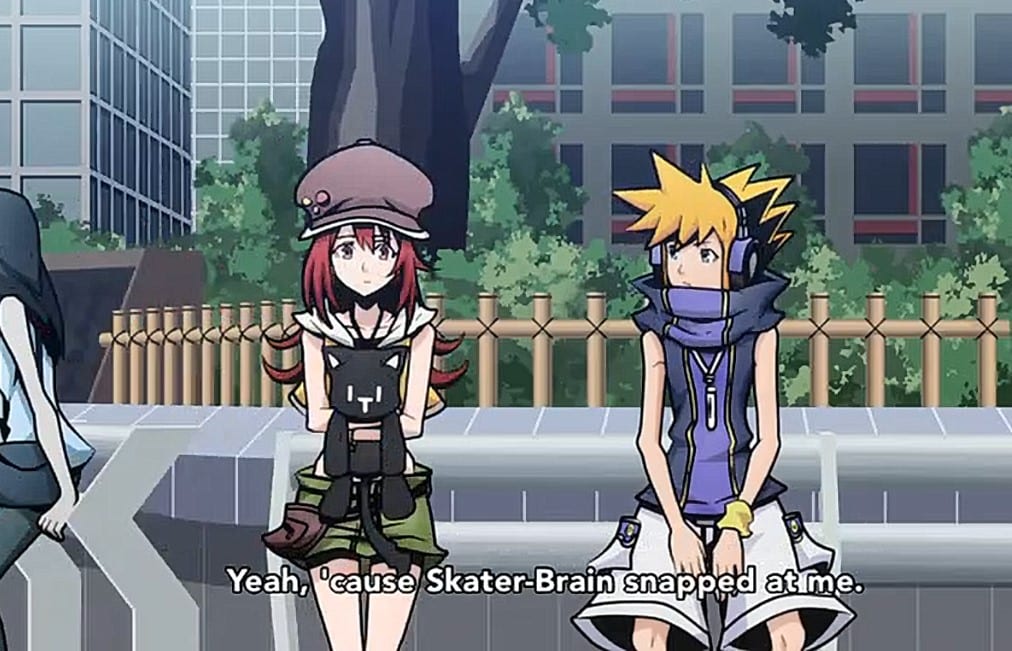 Neku and Shiki wake in the middle of the city, and Naku finds that they are left with seven days to complete their mission. They received a message that man and woman in their late teens caught in an accident, unconscious, so players in the Reappears Game, dead people, are assembled underground. Neku looks at Shiki, who is still unconscious in the middle of the road. He wonders if Shiki and he is dead. Neku remembers that they failed in their first attempt to complete the mission in this game.

He realizes that this is their second chance, and they can’t afford to ruin it or lose. Neku opens his left hands and finds two badges, wondering why he died. Shiki wakes up and calls Neku, who realizes that he can’t remember why he died. She told Neku that his amnesia might have something to do with his entry fee. Neku got confused and wondered what Shiki is telling him. Shiki explains that when Neku entered the Reapers Game, they take whatever is most important to him, and there is no exception.

Previously on The World Ends with You The Animation Episode 3

Shiki wonders what taking so long since it has been 20 minutes when they entered the Reapers Game. She asks Neku if he remembers when Rhyme said she didn’t know about dreams. Neku replied yes and said it is because Skater-Brain snapped at me. Shiki comments that it is because it was taken as her entry fee. Neku asks if it is just like how he can’t remember anything. Shiki said she hates it, and she doesn’t understand why they took her appearance. But now she knows what has happened.

She reveals that when she saw that she look like Eri here, she was startled but happy. But she always wants to change, and she would like to become Eri, cute and capable. She wonders why she couldn’t be like Eri since she realizes that she is still herself within her. Shiki also said she didn’t want to accept what she can’t do, and she got jealous of Eri and played the victim. Shiki reveals that she was protecting herself, but in the end, she cares about herself most.

She said that’s why they took her appearance as her entry fee, but she is fine and understands herself. Neku comments that he understands, and she told him that if they survive seven days, they will come back to life and get their entry fees back. Neku realizes that is when he will know why he died, and he will get his memories back. He is worried that he knows nothing about himself as a person. But he just knows the other version of himself that is playing the Reapers Game.

Shiki reveals that they are left with only two days to complete seven days. She wonders why she can’t see Beat and Rhyme around. Neku wonders what he will do if he survives. Meanwhile, Yodai and his crew talk about the players that are remaining. Yodai reveals that only four players remain: Beat, Rhyme, Shiki, and Neku. He comments that he will smash them and cook them before tha sundown tomorrow. If he fails, they both will get their lives back and get their entry fees back. Boss Megumi comment that he is counting on Yodai.

Yodai vows that he won’t fail his boss no matter what. Megumi reveals that when this game ends, Yodai is officially, but he skips his words. Yodai realizes what Megumi wanted to say, and he comments that he is grateful and delighted. Meanwhile, Shiki and Neku are looking for Beat and Rhyme. Rhyme shouts that they are over here, and Beat told her not to shout since it is embarrassing. They receive a no-time limit mission, and they are told to reach tower records.

Later they arrived at the tower record, and Rhyme saves Beat from being swallowed by a shark that lives in land and water. Rhyme ends up getting swallowed, and the trio fights with the shark, but they lose Rhyme. In the evening, they smash Yodai and win the battle. They met with Megumi, who told them about the new rule. He told them that he took the second entry fee and they will be playing the Reapers Game again. Neku agrees since Shiki was about to vanish.

The World Ends with You The Animation Episode 4 Preview

Find more about the Reapers Game on Preview And Recap: The World Ends With You The Animation.

Tags: The World Ends with You The Animation
ShareTweetShareSharePinSend
Previous Post

Back Arrow Episode 17: Preview and Recap