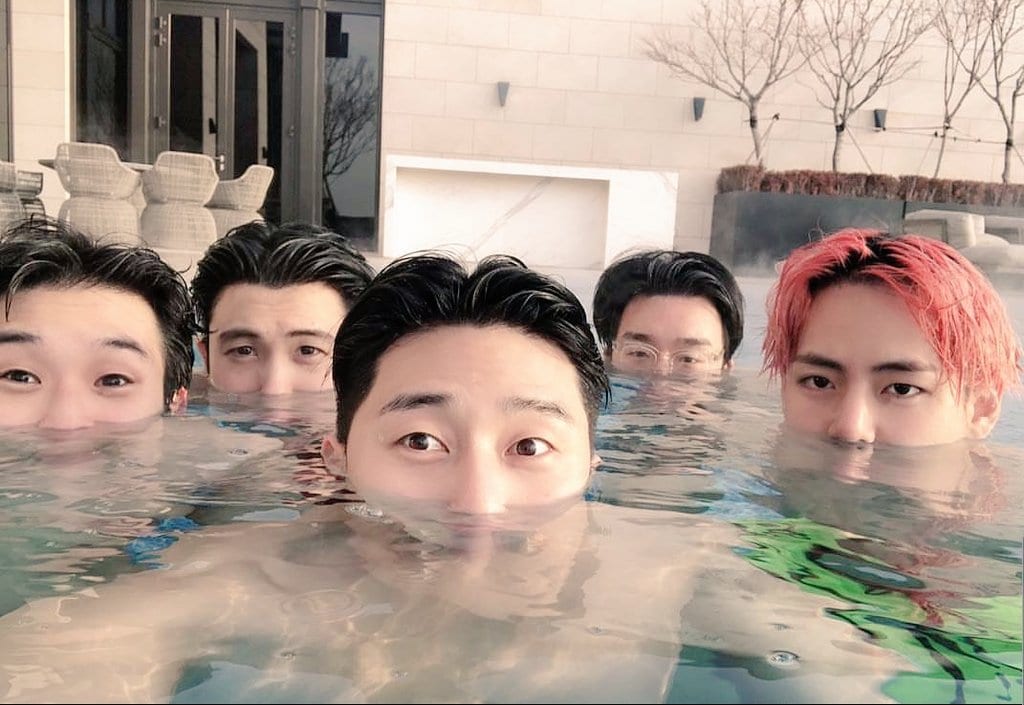 Korean Entertainment has conquered the world. From Kpop to Kdrama, the fandom is growing every day. Apart from that, the Wooga Squad is also equally famous among many Kdrama and Kpop fans. The friendships between Kpop idols and South Korean actors are genuinely incredible. Among many well-known groups (The 97 Liners, The 92 lines), The Wooga Squad is the most adorable group of friends. The five-member squad comprises BTS’s V, Park Seo Joon, Park Hyung Sik, Peakboy, and Choi Woo Sik. All of the members are well-established in the industry and have a huge fan following. Recently, all of them had a get-together to celebrate Choi Woo Sik’s fan meeting. And to say the least, it was a blast—thousands of people tuned in to watch the online event. So, we thought of telling you more about the Wooga Squad.

Park Hyung Sik, Park Seo Joon, and BTS’s singer V met on the Kdrama, Hwarang: The Poet Warrior Youth. Later on, Park Seo Joon introduced his Hwarang costars to his other two best friends – Peakboy and Choi Woo Sik. Now the five, altogether keep the ‘wooga squad’ fans up to date. Although they all meet together rarely, they always show support and love to each other on their success and new projects. 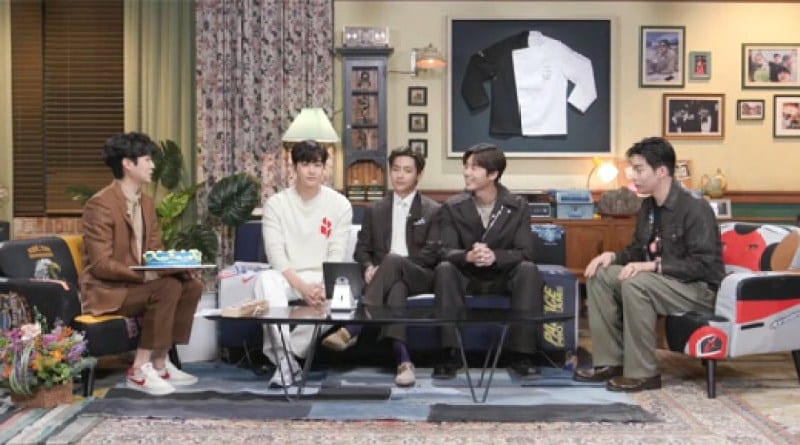 The Wooga Squad- Meet The Members!

Although all squad members are super famous, you may not know about their friendship in depth. Three of them, the co-stars of Hwarang, met in 2016 while filming for the show. Later, Choi Woo Sik and Peakboy joined the group. On multiple occasions, the members meet and gather for a get-together. However, it’s scarce to see all five of them. Sometimes it’s mandatory military services, and other times, it’s busy schedules. Still, they manage to cheer on each other.

In 2019, when Choi Woo Sik garnered love from all over the world for his film Parasite, the other four showed their happiness on IG. Meanwhile, whenever BTS releases a new song, they all talk about it endlessly. The same goes for the actor members, who cheer on each other by sending coffee trucks to their sets and more. Recently, the other day, they all met for Choi Woo Sik’s fan meeting. Earlier this month, Park Seo Joon completed ten years in the industry and had his event. BTS’s V, Woo Sik, and others send video messages on his success as well. 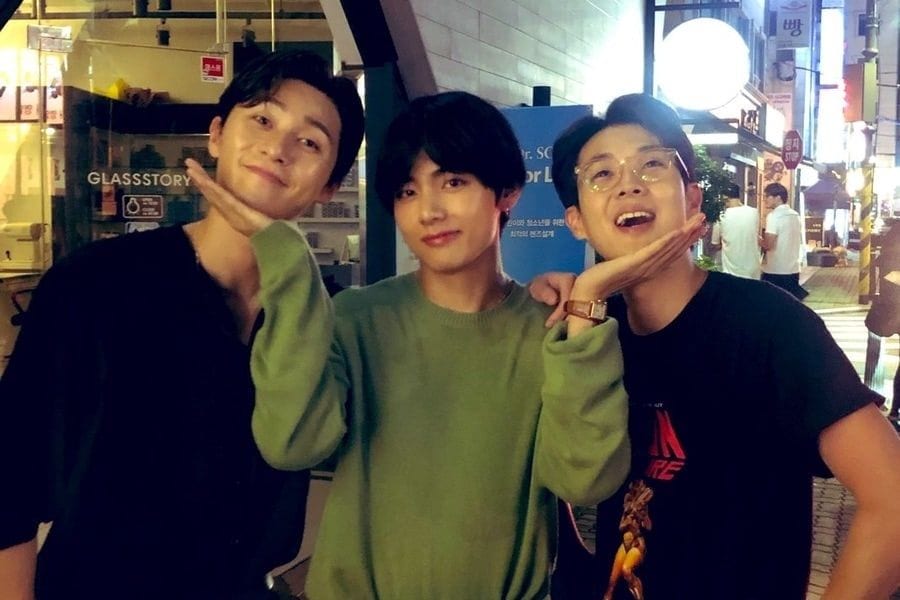 Park Seo Joon, Choi Woo Sik, and Park Hyung Sik are famous for their appearance in Kdramas. Seo Joon has hit dramas like She Was Pretty, Fight For My Way, Itaewon Class, and more under his name. Meanwhile, Woo Sik’s work front includes Parasite, Train To Busan, Time To Hunt, Okja, You’re All Surrounded, and more. Moreover, Park Seo Joon made a guest appearance in Woo Sik’s hit Parasite. Lastly, Park Hyung Sik, known for Strong Woman Do Bong Soon, and Suits, High Society. He is also a member of the Kpop group, ZE: A.

The other two are BTS’s V and artist, Peakboy. Everyone knows BTS’s V or Kim Tae Hyung; He is an actor, singer, and member of the world’s biggest boyband BTS. Meanwhile, Peakboy is a singer, producer, rapper, and songwriter who debuted in 2017. V sang ‘Sweet Night,’ an OST for Seo-Joon’s Itaewon Class.

Choi Woo Sik celebrated his tenth year in the industry the other day. And he welcomed his Wooga Squad friends to celebrate his big. The five clicked selfies and had goofy sessions and also a quiz. They arrived on the set with cake, flowers, and presents for Woo Sik. Also, they chatted and answered many questions about each other, but mainly about Woo Sik. 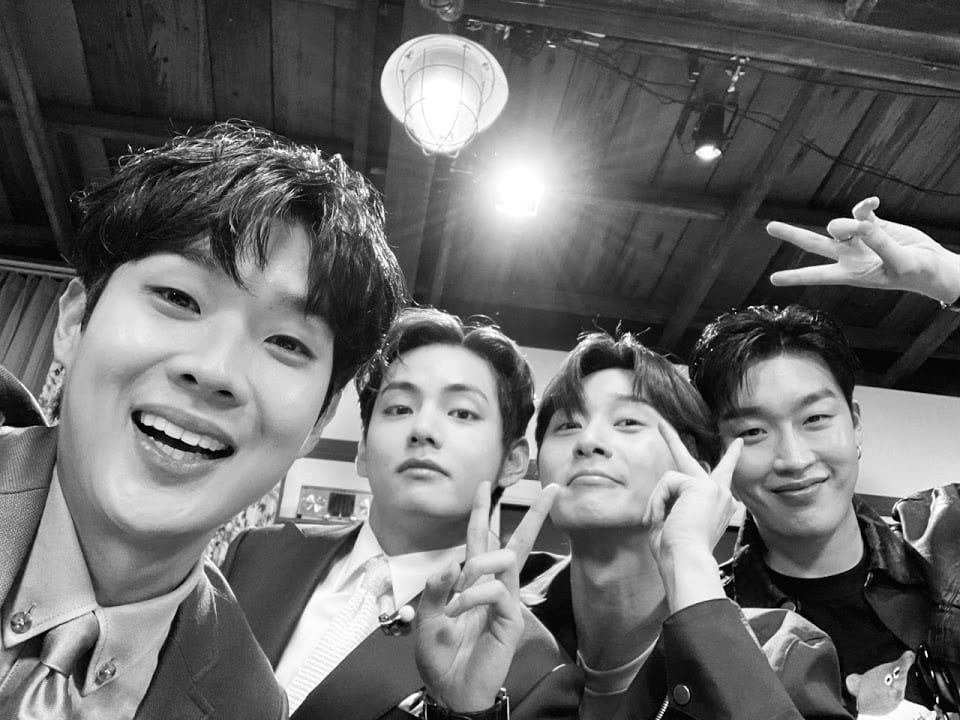 Sadly, Park Hyung Sik left the event before they all took the group selfie. It reminded the fans of the time when he was left from V’s vacation picture with the other three members, and they had to edit Hyung Sik in the picture.

Check out the complete video of the event here.