The Witcher Season 2 came to a wrap leaving a number of potential storylines to move ahead with. As the universe of the show expands, here we are looking figuring out when we can expect The Witcher Season 3 to release. 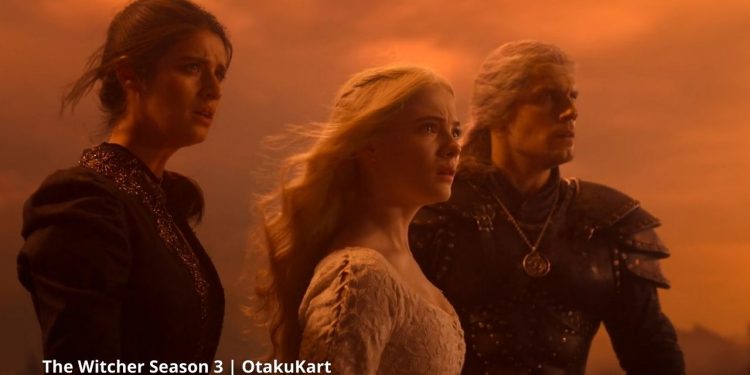 From The Witcher Season 2 Featuring Henry Cavill as Geralt, Freya Allan as Ciri and Anya Chalotra as Yennifer

The Witcher Season 2 is making rounds around the internet returning to screens after almost two years. The ever-expanding universe of The Witcher took some cues from its other spin-offs. For example, the anime movie The Witcher: Nightmare Of The Wolf had its own story-ties in the second season. The same may continue for the coming prequel series The Witcher: Blood Origin. Amidst all of these shows that form this universe, where does The Witcher Season 3 lie is a question to look at? Let’s find out the same.

So we will start off by recapping all the events that took place during the second season of the show. Right from Geralt protecting Ciri’s apocalyptic powers to Voleith coming to take over her body and also revenge on the first class of The Witchers. Then we will take a look at the release date, updates, and what creators of the show have to say about The Witcher Season 3. After analyzing the same, we may come to determine the plot and cast the third season of The Witcher could have once it returns to Netflix again.

The entire second season of The Witcher followed Geralt of Rivia, Ciri, and Yennefer in the aftermath of the war of Sodden. Geralt spent time protecting and training Ciri from the threats that were coming for her. After all, as we saw in Season 1, them crossing paths was destiny.  He also saw her as a threat too due to the number of powers she holds within her.

Meanwhile, previously thought to be dead, Yennefer survived but had lost all her powers. She found herself sharing similar visions with Fringillaand Francesca Findabair, the queen of Elves of Dol Blathanna. This brought her face to face with Voleith Meir, The Deathless Mother, a demon. Voleith Meir was playing her mind games to manipulate the three of them. This saw Francesca giving a baby only for someone to kill it and Fringilla taking over power by aligning herself with Elves only for the emperor to later find out.

Coming to Yennefer, she wanted her powers back and for that, she had to lead Ciri to Voleith. She did, but at the last moment, Yennefer backed off but Ciri already believed she had betrayed them. All of this pain and suffering was something Voleith, an entity with no physical form was looking for to set herself free from the imprisonment of The Witchers. Now she was looking for revenge and the body she wanted was off Ciri.

She began killing the first-class Witchers as she wanted revenge. Until The Witchers decided to fight back. Geralt was still looking to help Ciri who was under the possession of Voleith and was unleashing portals and monsters. In the end, a little sacrifice of Yennefer to give up her body and Ciri’s quick thinking saw them getting free of the demon whom they sent to another world before returning to theirs.

The Witcher Season 2 also took a dive into Ciri’s history. She is a descendant of an elve named Lara Dorren. Now the elves who see her as their savior, the Wild Hunt, the throne of Cintra, and her own father who isn’t dead wants her and is looking for her.

We are expecting The Witcher Season 3 to release in early or mid-2023. Officially, The Witcher Season 3 might not have a release date but it is definitely happening. At the inaugural TUDUM event of Netflix, they renewed the show for another season run. So, we are going to give it a year for the show to go into the entire process of creation.

The most recent update on The Witcher Season 3 suggests that writers have already done their part for the show. The script is almost ready for The Witcher Season 3. The only move the creators have to make is to go into production. Talking about the same in an interview, showrunner Lauren Schmidt Hissrich shared her thoughts on early development.

Lauren Schmidt Hissrich says that in early December only, they almost came close to finishing the script of The Witcher Season 3 in the writing room. But more than that, she was also looking forward to seeing how this season shapes. Mostly it had to do with the fact that this season is based on the show’s favorite book The Time of Contempt.

Apart from that, in case you didn’t know, back in 2019, Lauren Schmidt Hissrich had also stated that she was planning for a total of seven seasons for the show. More importantly, she also claimed not to go above and beyond. The main aim was to stay true to the books and not rush in.

Lauren also believes that Seasons 1 and 2 of The Witcher have done a great job laying the groundwork for how big the third season could be. According to her, the creative process has just begun when it comes to The Witcher Season 3. With script ready, they will soon bring directors on, the actors back in and make sure to deliver a reflecting, strong and memorable third season.

So if we look at what Lauren Schmidt had to say, the release dates of the first two seasons and eliminating the Covid-19 pandemic and delays. Then we come to the early-mid 2023 release date for the show. If not that, then we have to look forward to the show going into production or just wait for Netflix’s official announcement.

The ending of the second season suggests that Geralt, Ciri, and Yennefer might end up having multiple enemies in the third season of the Witcher. First of all, Ciri might have to face the fact that her father isn’t dead. He was thought to be dead along with his wife on a sea voyage. But Emperor Emhyr is out there looking for his daughter. He might continue to do so in The Witcher Season 3. Ciri might have to choose sides to stick with Geralt or by her father’s side. But we also believe there is more to this story.

Coming to the Elves, Francesca Findabair. The queen of Elves of Dol Blathanna, and everyone believes she is the savior of theirs. Especially with the fact that she is the descendant of Lara Dorren. The elve had a baby with a human and was ill-treated. Lastly, there is a need for someone to fill in for the Cintra Throne. So the Kings and Mages may want Ciri to marry King Vizmir to take over the throne. Lastly, Valieth Meir and The Wild Hunt whom the fans are looking forward to also wants Ciri by their side. Now it’s like everyone wants Ciri who is just realizing her apocalyptic powers and somehow getting familiar with it.

We are definitely expecting names such as Henry Cavill, Freya Allan, and Anya Chalotra to return for The Witcher Season 3. They may fill in with Cavill as Geralt of Rivia, Allan as Ciri, and Chalotra as Yennefer. Joining them would be Joey Batey as Jaskier. The second season saw many characters coming who could potentially be important for the third season. We are just not sure yet at least until Netflix comes up with some announcement for the third season.

Still, we may look forward to the return of Bart Edwards who played Duny initially, now as Emperor Emhyr var Emreis. He might end up being a prominent one owning to the fact he is the father of the most powerful individual in the show. Also with the mystery, he carries around himself with his return.

Then there is Mecia Simson as Francesca Findabair who might turn out to be an important character as well. Apart from them, we are not counting many Witchers to show up in the third season moving on. Thus, expecting a storyline around Geralt protecting Ciri with a little help from Yennefer.

We are also looking forward to the status of other characters such as Cahir and Fringilla. So if they are there, then we expect to see Eamon Farren and Mimî M. Khayisa return to fill in for those roles. Anna Shaffer as Triss Merigold, Royce Pierreson as Istredd, and Mahesh Jadu as Vilgefortz of Roggeveen are some of the other main cast members we are looking forward to seeing.