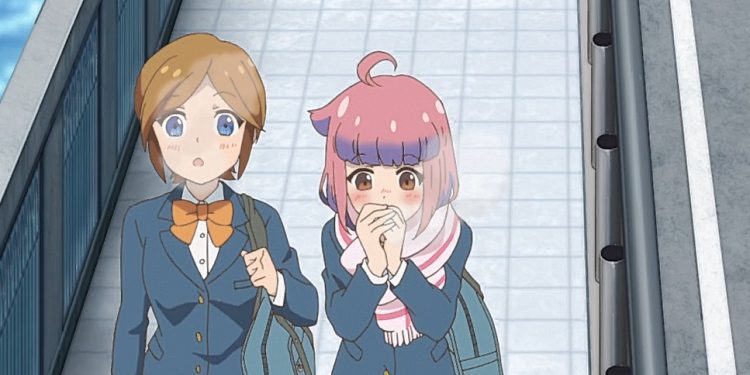 Let's Make a Mug Too Season 2

Let’s Make a Mug Too Season 2 Episode 11 reveals the winter festival where the potters use hot water for the pottery wheel. Himeno and Nao enjoy playing with snow and boiling water to keep their hands warm. After school, the girls went to the pottery clubhouse, and Nao played with her robot. She notices that Himeno and Touko are crafting something and wonders what pottery piece they want to create. In Let’s Make a Mug Too Season 2’s latest episode, Saki joins them and wonders how long it will take for them to produce something new. Touko tells her not to worry since they have begun.

She reminds the girls about the visitors, and Himeno realizes that Ximeno has sent them a message. The girls wonder what Xime is saying, and HGimeno reveals that it is a piece that Ximeno has made, and she wants them to come and visit. The girls realize that Ximeno has learned a lot about pottery the other day she visited, and that helped her improve her pottery and make that piece she promised to show them. They know they agreed to meet with her after the piece is finished.

The girls get excited, which motivates them to work hard since they have to return the favor and Ximeno something they have made. The girls went to Ximeno’s studio in the morning, but they found that the dojo was closed. Ximeno welcomes them and realizes that they will have a lot of fun since she takes off for the whole day. They both enter the house and sit near the piece that Ximeno made. Ximeno has hidden that piece under veil not to spoil the surprise. The girls wonder what is under the veil.

Ximeno unveiled the table, and the girls were excited to see a set of seven-piece that Ximeno made. They notice that all settings have a sun symbol and realize that Ximeno likes something related to the sun. Ximeno explains why she uses the sun as her motif. She reveals what the set will be used for and how she hardens making them. Ximeno talks about when she arrives in Japan and learns about the custom of putting food out for deceased family members. That is what motivates her to choose different colors and sun when she makes her a set of seven pieces.

Ximeno also told the girls about the family altar and different traditions. Himeno talks about the time they offer to her family altar and that she feels that her mother might be kind and lonely. All of the girls had their say about the piece that Ximeno created. Himeno wonders if Ximeno is ready to sell them at the upcoming event. Ximeno reveals that she won’t sell them after two or three years. But Himeno thinks they are too cute and it will be better to sell them faster.

In the evening, the girls head home after having fun. On their way, Nao noticed that Himeno was thinking about something and suggested going somewhere. At Tokishorou Cafe, Toshirou talks with the Himeno teacher and reveals that he thinks about something. They talk about Himeno’s progress, and her father is worried that she is not herself. He has flashbacks of him with Himeno encountering various obstacles. Himeno is yet to create her masterpiece, and Tokoshirou wonders what delays her. Hime and Nao relax at the top, where they can see the view of the city.