The Wheel of Time Season 2: Everything We Know So Far 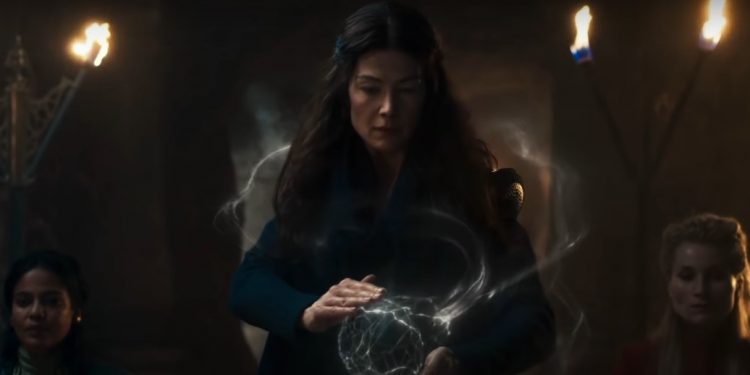 The Wheel of Time Season 2

Amazon Prime Video’s The Wheel of Time season 2 was confirmed in early May. And with the conclusion of the debut season starring Rosamund Pike in the lead role just this Christmas Eve Day, the hype and excitement is everywhere. Firstly, The Wheel of Time tells us the story of a magical world. An alternate universe where a myriad of characters with all sorts of powers collide.

Its latest ending comprises a glimpse into a vast world which will give us many thrills and excitements. Just a few days ago, two forces stood off against each other. And trust us, The Wheel of Time is a very vast and dense story, with lots of plots, characters, and twists that make Game of Thrones look pale in comparison. Now without any further ado, let’s take a look at season 2 here at Otakukart.

Rand is revealed to be the Dragon Reborn at the end of Season 1. He and Moiraine then enter the Eye of the World to face the Dark One, who disguises himself as a human and attempts to persuade Rand to join him. However, the young Dragon Reborn refuses to do so, and the Dark One’s figure is eventually banished. Moiraine, on the other hand, is attacked by the evil force and loses her magical abilities as a result. In addition, she severs her ties with Lan.

Season 2 will keep going the adventure of the main characters and show us a very different image of Moiraine, based on the second book in the series (‘The Great Hunt’). In addition, the five youths’ magical abilities will continue to develop. The first episode of Season 2 is titled ‘A Taste of Solitude.’ It could be alluding to Rand’s solo journey, which stems from his decision to leave the rest of his Two Rivers friends behind. Of course, we’ll get to see more of ‘The Wheel of Time’s vast landscape.’ Furthermore, Judkins claims that the upcoming series will expand on the world that Season 1 created.

The Wheel of Time Trailer

Where to Watch The  Wheel of Time?

The Wheel of Time is an Amazon Prime Video exclusive. In consequence, the only place to find this fantasy epic show will be the Jeff Bezos-owned platform. All things considered, Amazon Prime Video is a globally available platform at a very accessible price. For a monthly fee, you can have access to the vast and ever-expanding Prime Video catalog which will let you see thousands of hours of shows, movies, documentaries and series ad-free from any device.

The Wheel of Time debuted on November 19, 2021, and concluded on Christmas Eve Day (December 24), 2021 with a total of eight episodes of one hour run time. Firstly, the sophomore season is confirmed. Back in May 2021, when the shooting for this series concluded, Amazon Prime Video confirmed that they would be doing a second series. Moreover, Rafe Judkins is eager for more than two seasons. In fact, he wants to make eight series of The Wheel of Time. And if that’s not enough, he also wants to make three films that will be the prologue to the series.

In regards to the release date, if we consider that by November 2021 Amazon confirmed that photography for the sophomore season was 50% complete, we could expect the production to conclude in early February 2022. This means that The Wheel of Time will release sometime in late 2022.

The Wheel of Time Season 1 Recap

Moiraine and her Warder, Lan, begin the season on the hunt for the mythic Dragon Reborn, a warrior who keeps the world’s fate in their hands. They go to the Aes Sedai headquarters after picking up Rand, Egwene, Perrin, Mat, and Nynaeve from the town of Two Rivers. Moiraine then confirms that one of the youngsters is the Dragon Reborn. And that they have a chance to defeat the Dark One if they work together. Rand discovers that he is the mighty Dragon Reborn the night before they are to embark on the perilous mission. And he and Moiraine depart without the others to confront the Dark One.

We are transported 3000 years back in time, where Lews Therin, a male Aes Sedai follower, discusses killing the Dark One. His ally, a female Aes Sedai follower, warns him that the evil force has the potential to infect the One Power. But Lews appears to proceed with the attack. Back in the present, a huge Trolloc army led by Fades threats Shienar, where Egwene, Nynaeve, and Perrin wait for Rand with bated breath. The Shadowspawn attack is relentless, and the king is killed.

His sister, on the other hand, gathers every magical channeller in the kingdom, including Nynaeve and Egwene, and attempts to repel the horde. The explosive magic unleashed by the channelers’ combined powers decimates the Trolloc army but is just too much for the magicians, killing the majority of them as well. Nynaeve, too, has been severely injured. In the meantime, a Darkfriend named Padan Fain, along with two Fades, enters the castle through a tunnel and steals an ornate white box that appears to be intended for the Dragon Reborn.

Rand and Moiraine eventually pass the Blight and enter the Eye of the World, and the former begins to see visions of the Dark One in human form. He tries to persuade Rand to join him, claiming that the young Dragon Reborn will then be capable of shaping the universe to his taste. Rand, on the other hand, refuses and, for the first time, channels his considerable magical powers through a Sa’angreal given to him by Moiraine, expelling the Dark One.

Rand, now safe for the time being, asks Moiraine to inform everyone that he died at the Eye of the World and departs. Lan arrives quickly and discovers Moiraine, who is exhausted and out of breath. She informs her Warder that Rand is no longer with her and that she no longer feels connected to the One Power. In the final moments of the season finale, we see an unidentified beach being attacked by a swarm of ships carrying magic channelers.

What is Rand Going To Do?

Rand decides to leave the group and asks Moiraine to inform the others that he is dead in the season’s most dramatic ending. Given how much Rand adores Egwene, let alone his friends, this is a significant step for Rand. His reasoning, however, is centered on the black fate that all-male magic channelers face.

Since the Dark One infected the male half of the One Power (Saidin), all-male magic channelers have gone insane as a result of their connection to Saidin. As a result, Rand knows he will eventually go insane now that he has opened his link to the One Power. In fact, he tells Moiraine that he can also now feel the effects of the madness and is afraid of hurting the people he cares about. As a result, for the sake of Egwene and his friends’ safety, Rand decides to strike out on his own. And possibly attempt to master his powers and defeat the Dark One.

At the season-ending, Moiraine, one of the most powerful Aes Sedai members, loses her connection to the One Power. Her loss of powers occurs shortly after she confronts the Dark One at the Eye of the World for the first time. Moiraine instantly channels multiple threads that transform into deadly spears when she realizes the ominous entity has taken human form. Her abilities, however, appear to be no match for the Dark One, who effortlessly vanishes her conjurings. He then severed Moiraine’s link to the One Power.

When the Dark One teases the Aes Sedai member about how she can now live with realizing the One Power but never being able to touch it, we get our first hint of what has happened. Moiraine later confirms this by hinting to Lan that their connection cannot be repaired since she has lost her magical abilities. This is a terrible situation for Moiraine. Why? Because a break from the One Power after channeling magic is said to cause madness. Which would be a terrible fate for this important character.

Also Read: Rosamund Pike’s Net Worth: The Actress Opens Up About Queer Romance In The Wheel Of Time

When Will Married At First Sight Australia Season 9 Release?