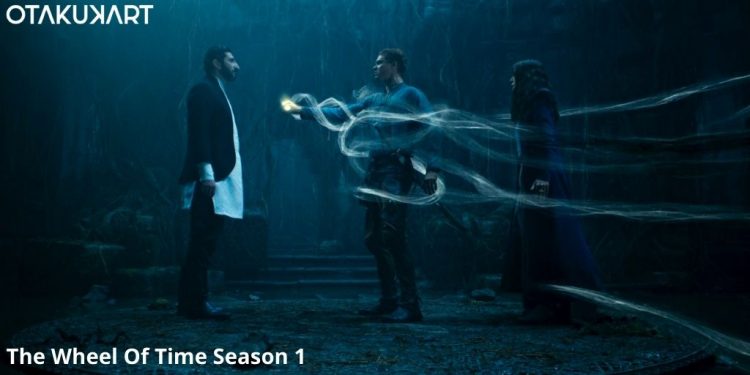 The ending of Episode 8 has left the viewers wondering about the release of The Wheel Of Time Episode 9. What seemed like the ending of the final battle eventually left the viewers with a lot of questions. The episode was filled with a lot of emotions. Meanwhile, Rand and Moiraine went ahead to fight The Dark One. On the other hand, Egwene, Perrin, Lan, and Nynaeve were worried about Rand and Moiraine as they didn’t know where they were.

Whereas, the army of the Trollocs along with the Fades was closing in on the city of Fal Dara to invade it. Therefore, Egwene, Perin, and Nynaeve decided to stay and help the army defend the city. Meanwhile, Lan set out to find Moiraine and Rand walking through The Blight. However, one of the shockers was Rand watching The Dark One kill Moiraine right in front of him. But this got everyone wondering, did Moiraine actually die?

The latest American tv show has made quite an impact in the fantasy genre of shows with its epic storyline. In addition to that, the characters of the show have also impressed a whole lot of viewers. All of this has resulted in a successful run of the first season. However, the fans are now eager to watch The Wheel Of Time Episode 9. But before discussing that, let’s take a look at the battle between the shadow and light that took place in Episode 8.

The Wheel Of Time Episode 8 Recap: The First Battle of Many!

Episode 8 of The Wheel Of Time came out on 24th December 2021. Furthermore, the episode was titled “The Eye Of The World”. The episode began with a flashback of the past from 3000 years ago where we saw the Dragon Reborn. He was ready to fight The Dark One but the Amyrlin Seat of that time was suggesting him otherwise. Now we knew, that he did not win the battle against The Dark One and sent the world, that had achieved all the advancements, back to several thousand years. Coming back to the present, we saw Rand and Moiraine getting closer to The Eye of The World. So they decided to rest for a while and this is where Rand saw The Dark One kill Moiraine.

The Dark One further told Rand that 3000 years back he came to fight him with several other Aes Sedai and still couldn’t defeat him. However, Rand soon realized that this was a dream and woke up. Although he didn’t tell Moiraine what The Dark One told him and they moved ahead towards The Eye. On the other hand, we saw the Trollocs nearing the Tarwin’s Gap that has been holding off the army of The Dark One for ages. Therefore, the Lord of Fal Dara, Agelmar ordered his army to get ready to fight and protect the city that has never fallen. Egwene and Nynaeve joined Amalisa and channeled their powers towards her that wiped out the Trollocs army after they raided the Gap. However, the excessive power draws burnt the women including Nynaeve who saved Egwene somehow.

Meanwhile, at The Eye of The World, Rand came across The Dark One and fell unconscious. Moreover, The Dark One showed Rand the life he could have with Egwene as a vision that almost felt real. While Moiraine put a knife to Rand’s throat and was ready to kill him if he chose the Dark Side. Even though Rand touched the dark power, he eventually used an object called Sa’angreal that was given to him by Moiraine and put his power into the object. The object contained all the strength of the male channelers from before the Breaking of the World. Their power combined with Rand’s power eventually destroyed The Dark One. Although, in the city, Perrin saw Padan Fain who was a Dark friend kill Loial and the other soldiers and take away The Horn of Valere. Meanwhile, Egwene used her power to bring Nynaeve back to life. Whereas, Lan found Moiraine and learned that Rand was gone but Moiraine did not tell him exactly that Rand did not die but left on his own.

The Wheel Of Time Episode 9: Will It Release?

“The Wheel Of Time Episode 9 will not be releasing as the first season ended with Episode 8.” However, the series had already been green-lit for a second season. This has got the viewers very much excited to witness what lies ahead. Moreover, Season 2 might arrive in early 2022 considering the filming already began in July 2021. So stay tuned to experience another epic season when it arrives next year.

With the first season ending on a big cliffhanger, the viewers are awaiting the release of Season 2. However, many of the viewers are still wondering about where to watch The Wheel Of Time Season 1? Well, that question has quite a simple answer to it. “The Wheel Of Time Season 1 is available to stream on Amazon Prime Video in the United States, India, U.K., Canada, Australia, Germany, and many more countries. Meanwhile, the show is not available on any other streaming service as it is an Amazon Original.