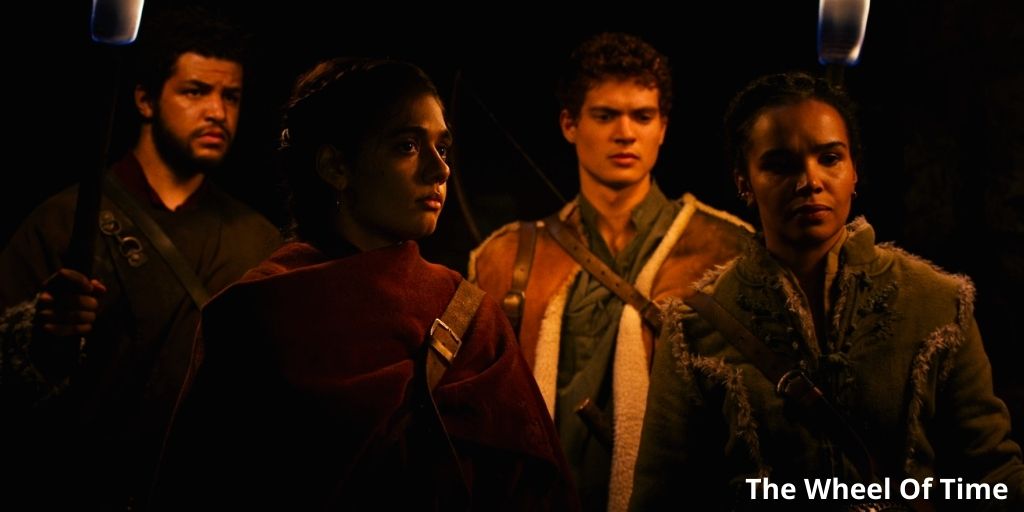 The time has finally come for a fierce battle at the Eye of the World in The Wheel Of Time Episode 8. Meanwhile, the previous episode gave us a look at Moiraine, Lan, Nynaeve, Rand, Egwene, and Perrin traveling through The Ways. Although, it got a whole lot dangerous for them when another dark supernatural entity attacked them.

On the other hand, we saw everyone discussing the possibility that Mat could be the Dragon Reborn. However, they had no way to find that out now since he decided not to join them and stayed behind. Meanwhile, the episode gave us a look at the borderland city that holds the Trollocs from crossing the lands. Moreover, it was the home of Lan as we witnessed the Lord of the fortress city feeling pleased to have him back after a long time.

However, the biggest spotlight of the episode was the revelation of the Dragon Reborn. The first season of the epic fantasy series has been a huge hit among viewers all around the world. Although, the season is now very close to, probably, a very fascinating conclusion. Therefore, the viewers are quite eager and hyped up to watch The Wheel Of Time Episode 8. But before we discuss its release date and a probable plot, let us take a look at what went down in Episode 7.

The Wheel Of Time Episode 7 Recap

Episode 7 of The Wheel Of Time Season 1 came out on 17th December 2021. Moreover, the episode was titled “The Dark Along The Ways.” The episode opened up at the scene from the battle of the Blood Snow, where a pregnant warrior woman was fighting the warriors of the opposite army while protecting her baby. Whereas, in the present, we saw Mat willingly staying behind while everyone else entered the Waygate to travel through the Ways. However, things soon got dangerous when a Trolloc attacked everyone on the path. But it was thrown back by the channeling power which seemed to come from Egwene. Meanwhile, everyone rushed towards the Waygate on the other side of the bridge that would take get them to their destination.

But the black wind called Machin Sin that consumes the sanity of the living attacked everyone and put different thoughts into their mind. But, Nynaeve fought back and unleashed her power, holding back Machin Sin while Moiraine used her power and opened the Waygate. Eventually, everyone got out and reached the fortress city of Fal Dara. Lan, Moiraine, and the others were welcomed with respect in the city by the Lord. Meanwhile, Moiraine warned the Lord about guarding the Waygate, too, as the Dark One’s army has started using the Ways as well. Later on, Moiraine went to see an old friend who is a Seer. Seers have the ability to see the auras of individuals and sometimes even their futures. She took a look at all the villagers and revealed that they seemed to have an unusual bond together.

Although, she couldn’t tell who the Dragon Reborn was among them. At night, Moiraine asked everyone to decide whether they’d go to the Eye of the Word to fight the Dark One or not. On the other hand, Nynaeve met Lan’s family and had dinner with them. Moreover, both of them eventually expressed their feelings to each other and got intimate. Whereas Rand and Egwene got close too and spent the night together. However, Rand couldn’t get out of the thought that he got from Machin Sin, that he was the Dragon Reborn. Furthermore, in a series of flashbacks, we saw that it was Rand who channeled his power to throw away the Trolloc at the Ways. He then went out to see the Seer. While talking to her, he asked her to look into his life, and she revealed a shocking truth to him.

At the battle of the Blood Snow, the pregnant woman warrior gave birth to Rand. Moreover, the baby was born on the slopes of Dragonmount. Whereas the man who saved the baby was Rand’s father, who was also on the opposite side of the army. All of these things made Rand think that he was the Dragon Reborn. In the morning, we saw Egwene and Perrin tell Nynaeve that they were ready to go. However, Lan came in to tell them that he could not sense Moiraine as she had masked their bond and left. This was when Egwene realized that Moiraine had left with Rand. In the end, we saw Moiraine and Rand entering The Blight. It is the most dangerous place filled with corruption of the Dark One and the only way to the Eye of the World.

“The Wheel Of Time Episode 8 will release on 24th December 2021 at 7 pm ET on Amazon Prime Video.” Meanwhile, the episode will be titled “The Eye Of The World.” Furthermore, it will be the final episode of the season. That is why we can expect a fierce battle to break out. Although, Moiraine and Rand will have to face whatever awaits them in The Blight. On the other hand, Perrin, Egwene, Lan, and Nynaeve will probably try to get to Moiraine and Rand as soon as possible. But will the Dragon Reborn fight and defeat the Dark One or not? Stay tuned to find out.

The first season is about to conclude on an exciting note, and the viewers are desperate to know where to watch The Wheel Of Time, Season 1? The answer to that is quite simple. “The Wheel Of Time Season 1 airs every Friday at 12 am GMT in the U.K. on Amazon Prime Video. Whereas the show airs the same day at 7 pm ET in the United States and at 5:30 am IST in India on Amazon Prime Video. The show is not available on any other streaming service as it is an Amazon Original.