Another mesmerizing television series has been out for the fans to make them gasp. The Wheel Of Time Episode 4 will add some spark to this gasping situation among the fans. The brand new series has become the talk of the town. In the meantime, not only in the United States but in other countries across the world, people have been waiting for Episode 4. The show falls under the genre of epic fantasy shows. The American entertainment industry has already given us a lot of shows in this category to enjoy. However, The Wheel Of Time is expected to bring chills to our bones with its amazing story and fantasy element.

Digging a little more into the show’s history, The Wheel Of Time is based on a popular novel series. The original piece goes by the same name as the brand new television series. The novel series was written by Robert Jordan. These novels were a massive hit that made it obvious to turn into a television series. The Wheel Of Time is being produced by Sony Pictures Television and Amazon Studios. The show is very hyped, one factor being the production companies.

Additionally, Rafe Judkins is the developer behind this show. Interestingly, the show rolled out with the release of three episodes on the first day.  It was more than a blessing for the fans who were desperately waiting for the show. Hence, the question of where to watch The Wheel Of Time Episode 4 is one of the most searched ones on the internet lately. All the necessary details about the show and its plot will be a part of this article. Moreover, the cast and upcoming twists and turns will surely make this show a blast. 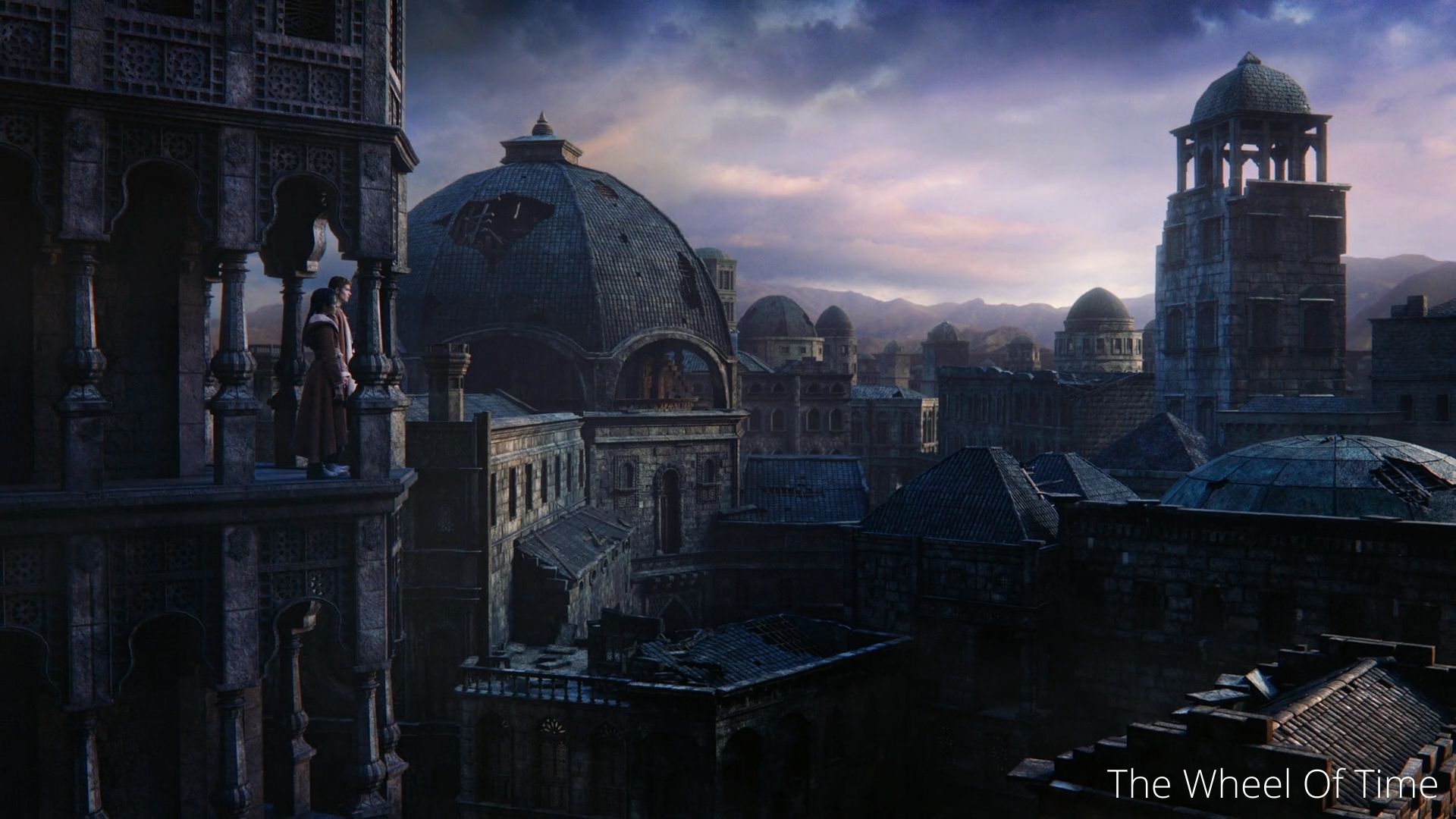 The Wheel Of Time Episode 1 Recap

Episode 1 of The Wheel of Time arrived on 19th November 2021. Moreover, the episode was titled “Leavetaking.” The episode started the story of this series, first showing us a glimpse of the character named Moiraine. She is among the Aes Sedai who are responsible for making sure the Wheel of Time is always moving. However, they now have a mission to find the ‘Dragon Reborn.’ The Dragon once tore the world ages ago, but this time, they want to find the reborn and defeat a dark power known as the Dark One.

However, the main challenge for them is that they don’t know whether the Dragon has been reborn as a man or a woman. Therefore, while on her path to find the Dragon, she comes to a village named Two Rivers and stays there with her Warder named al’Lan Mandragoran or simply Lan. There we are introduced to some other characters named Egwene al’Vere, Rand al’ Thor, Perrin Aybara, and Mat Cauthon, who are all friends. Among them, Egwene is next in line to become a Wisdom of the village, the one who is a healer, a leader but cannot get married ever.

Later on, at the night festival, the Dark One’s army of Trollocs, who are a breed of brutal beast-like creatures, terrorize the village and start killing everyone. Moiraine uses her exceptional elemental powers, and with her help, Lan manages to stop the army. However, she gets injured during the fight. The four friends survive the battle, and Moiraine asks them to go with her to the White Tower because the Dark One’s army will come after them. So they leave with her on the way to the White Tower, where they might learn who among them is the Dragon Reborn.

Also Read: 10 Shows to Watch if you liked Netflix’s ‘The Witcher’

The Wheel Of Time Episode 2 Recap

Episode 2 of The Wheel Of Time came out on 19th November 2021 and was titled “Shadow’s Waiting.” The episode began with Moiraine, Lan, Egwene, Rand, Perrin, and Mat rushing east in order to escape the Dark One’s army. On the other hand, we see a camp where the Whitecloak army is residing. It seems like they have been capturing the Aes Sedai and collecting the power rings from their fingers. Meanwhile, Moiraine, Lan, and the friends manage to cross a river on the ferry and leave the Trollocs behind as they are afraid of water.

Later at night, they stay in the wood for a night. Whereas Moiraine makes Egwene learn about her powers of channeling the wind. On the other hand, all of the friends see a dream about the Dark One at night. In the morning, they tell Moiraine about the dream, and she freaks out, signaling it has significance. She then asks them to start moving, but Rand cannot trust her. Although, he eventually goes with her seeing everyone follow her.

They come across the Whitecloacks on the way, but Moiraine and Lan manage to hide the fact that she is an Aes Sedai. However, as they move ahead, Moiraine gets more sick by using her powers and the injury. Furthermore, things get serious when the Trollocks find them, and they have to run again. But this time, Lan takes a desperate measure and takes everyone into Shadar Logoth. There they face another threat of a shadowed evil, and in order to escape, they are all separated. In the end, we see that Egwene’s mentor Nynaeve al’Meara is alive who was presumed dead during the Trollocs’ attack on the village.

The Wheel Of Time Episode 3 Recap

Episode 3 of The Wheel Of Time also arrived on 19th November 2021. It was titled “A Place Of Safety” and started by showing how Nynaeve survived after being taken away by a Trolloc. Meanwhile, she had now tracked down Lan somehow and was trying to kill him if he didn’t tell what Moiraine was up to. However, Lan hit her and tied her up. Although, he gradually started to gain her trust and asked her to heal Moiraine if she wanted to find her friends.

On the other hand, we see Rand and Mat separated from Egwene and Perrin. However, both the pairs decide to head east, thinking that the other will be going there too. Rand and Mat arrive at a village where they meet a girl named Dana. She helps them with a place to stay. Meanwhile, Mat talks to a Gleeman named Thom. Later on, Rand gets in the trap of Dana, who turns out to be a friend of the Dark One. She intends to take Rand and Mat to the Dark One, but Thom kills Dana and saves the boys.

Meanwhile, Egwene and Perrin try to survive the wild in their own way. But they soon get to a nomad tribe called the Tuatha’an or Tinkers and find a safe place to stay. On the other hand, Lan goes out to look for something. Whereas, Nynaeve is finding it hard to help cure Moiraine with the poison of the Trolloc in Moiraine’s body. However, Lan comes back, and they take Moiraine to a place where the Red sisters reside to help Moiraine. In the end, Moiraine gets surprised when she learns from her Red sister Liandrin that she has got a man who claimed to be the Dragon Reborn.

The Wheel Of Time Episode 4: When Will It Release & Airing Time

The first three episodes were quite a watching experience for the viewers. Therefore, they are now looking forward to the release of the next one. “The Wheel Of Time Episode 4 will release on 26th November 2021 at 7 pm ET and 4 pm PT on Amazon Prime Video.” Moreover, the episode will be titled “The Dragon Reborn.” The next episode will get even more interesting as the four friends move forward with their journey towards the east. Meanwhile, Lan will find it tough to get along with Nynaeve. On the other hand, we will leave a new power rise on the world. But the question will be, is that power good or evil? So stay tuned for the upcoming episode when it arrives on Friday.

How To Watch The Wheel Of Time Episode 4 Online? Streaming Details

The latest fantasy series has garnered the attention of viewers all around the world. That is why they are searching about where to watch The Wheel Of Time Episode 4 Online? Well, the answer to that question is quite simple and easy. “The Wheel Of Time Season 1 airs every Friday at 7 pm ET and 4 pm ET on Amazon Prime Video all around the world.” In addition to that, the show is an Amazon Original series and is exclusive to it. That is why the viewers will have to stick to the popular streaming service for now to watch the episode. So go ahead and start watching the show if you haven’t done that yet.

Adam Norris Net Worth: What Is His Company & How Has He Made His Fortune?