It took a lot of desperate searches and roadblocks after roadblocks but did Ruth manage to reunite with Katie towards the ending of The Unforgivable? 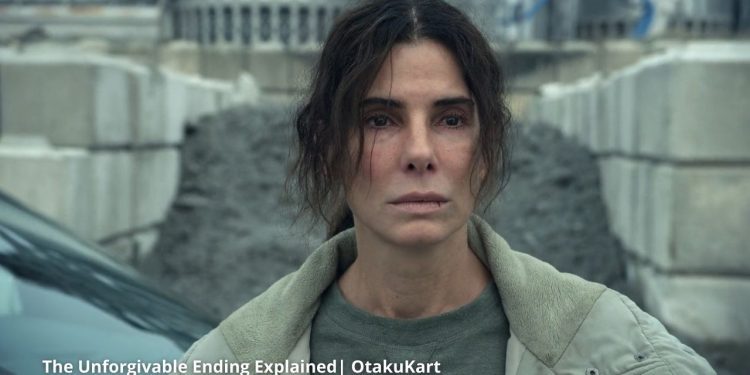 From The Unforgivable Featuring Ruth

The Unforgivable on Netflix was one heck of an emotional ride to look at. A women’s desperation to reunite with her sister to whom she has been a mother figure after 20 years of serving inside prison. Only for her to realize that her sister may have long forgotten about her. The Nora Fingscheidt directorial is a second hit for Sandra Bullock. The movie based on the series of the same name comes for Bullock on the OTT platform after the noise Bird Box had made. Here we are taking a look at how The Unforgivable and its ending panned out for us.

To answer the same, we will be looking at the basic plot summary of The Unforgivable that tells us about Ruth’s life after the 20 years in prison. The reason she went behind bars and the consequences she could be facing. Ruth’s drive to reunite with her sister is only to have roadblocks after roadblocks. Lastly, to the time we realize what really went down in the night and the actual reason Ruth decided to surrender herself.

The Unforgivable tells the story of Ruth Slater released from prison after serving twenty years in jail. She was put behind bars for murdering a cop who came to evict her and her five-year-old sister Katie after their parents died. After twenty years, she is offered two jobs to work by her parole officer Vince Cross. At the same time, she had to make sure not to talk to the victim’s family and keep away from criminal activities.

While she works her two jobs, she also aims to track her sister Katie down. Katie, on the other hand, is living with her adoptive parents, the Malcolms. They had made sure that she didn’t remember Ruth at all or any of the events that took place during the night Ruth killed the sheriff. Anyway, these same events have still haunted Katie. Visions of the same also led her to an accident in the movie.

In order to track down her sister, Ruth reaches out to her old home. John and Liz Ingram live there now. She tells them a small part of the story. With John being a lawyer, she asks him to help her track down her sister. Although Liz is against this, John still pushes to help her. Meanwhile, Keith and Steve, sons of the sheriff Ruth killed, are looking for revenge as well, with Ruth free now.

As life goes on, Ruth also faces trouble at work when she tells her story to a colleague named Blake. He froze after hearing the same and told some of the people there. A daughter of a cop attacked her for her crime. She makes up with Blake later on as he was a convict too, and according to rules, they can’t be friends.

Things take a brighter turn when Katie’s adoptive parents, the Malcolms, do agree to meet Ruth. The fact that kept away Ruth’s existence from Katie and has not given her any of her laters fuels Ruth. Also, they want to keep it that way. The conversation ends on a bad note leaving Ruth no second chance to meet her.

Also Read: The Devil All The Time Ending Explained: Did Arvin Die?

When Ruth lost that one chance, she had to meet Katie. Well, Katie’s adoptive younger sister Emily discovered one of Ruth’s letters. She also came across a number of letters in the basement. The letter certainly made her emotional, leading her to make contact with Ruth. She agreed to help her and told her about the concert Katie would be performing at. What Ruth didn’t know about was Steve stalking her around.

Steve had once tried to talk to her at work and found out about Katie through an old image in her wallet. Watching Ruth meet Emily saw him believing this is the grown-up Katie. Before Ruth could make any further move to meet Katie, she thought of taking advice from John. But unfortunately, he wasn’t picking up her calls. This saw Ruth knocking on John’s door to meet Liz, who wasn’t really happy to see her as we headed towards the ending of The Unforgivable.

What Actually Happened The Night Sheriff Was Shot?

Liz was pretty confrontational when she tried to approach John at her old home. She didn’t care what Ruth wanted or if she had a chance to see her sister. Liz blamed her choices are the reason she got here. Ruth was sick of people telling her about choices as she felt she had paid her overdue in prison. The conversation got real, and Ruth decided to tell what really happened the night Sheriff was shot.

A flashback told us that it wasn’t Ruth who killed the sheriff. In fact, she was on the phone talking while Katie was hiding near a basement. She heard about a gun nearby and took a shot at the sheriff who was walking in. She was five years old, and therefore it was Ruth who decided to take the fall and went behind bars for 20 long years. Liz agreed to leave, but a call from Steve changed it all. He had kidnapped Emily fueled with anger after he found out about his brother having an affair with his wife. After beating his brother, he wanted to take revenge for his father from Ruth, and this takes us to the ending moments of The Unforgivable.

Do Ruth & Katie Ever Meet Again?

Ruth comes to meet Steve only to find out that he got the wrong girl. Still, she lowers her guard down while Steve points a gun at her. Liz waiting outside, has called the cops. While cops may take time, Ruth talks to Steve about sorrow which he can’t take much, leaving him to fall on his knees. Ruth helps Emily escape, and cops fill in to make the arrests.

Towards the ending of The Unforgivable, Vince comes to take charge of Ruth, Emily’s family, including Katie, who comes to see her. From long-distance, Ruth watches on until Vince signals her to look back. Katie notices Ruth, and she recognizes her. She always remembered her even during her performance in the final hour of the movie. A hug between Ruth and Katie closes the movie.