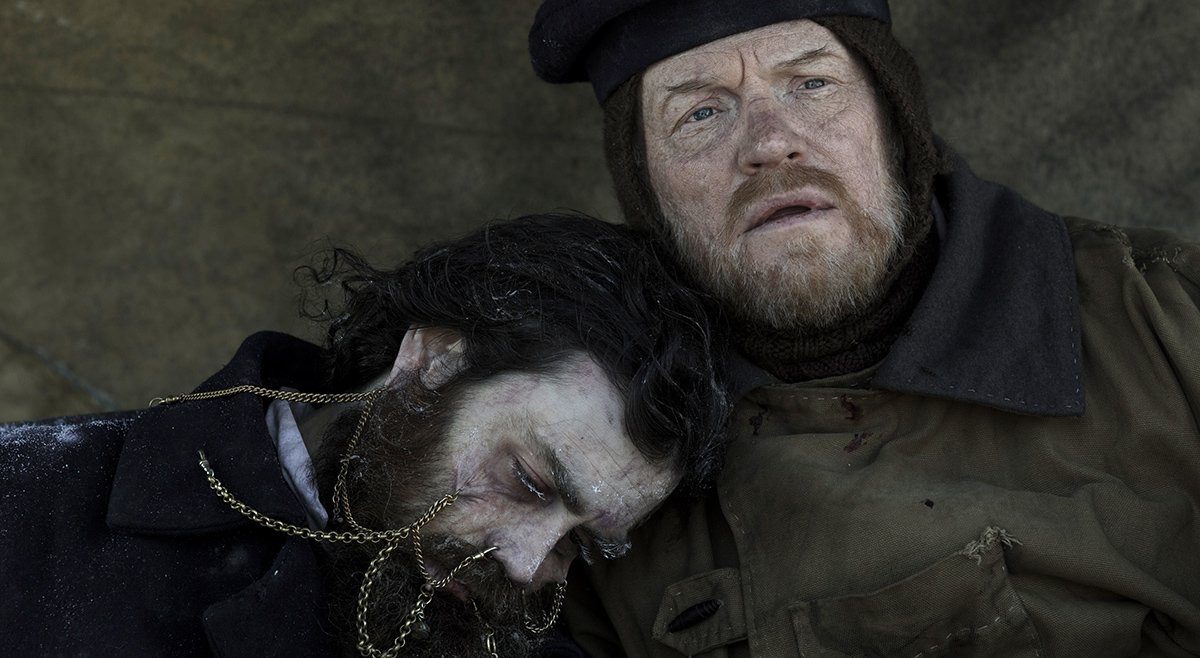 Dan Simmons’ novel The Terror (2007) inspired ‘The Terror’ Season 1, ending in the mist. A book brought to life, but to end so dreadfully, was it fair? One hundred and twenty-nine men died in the hopeful journey of conquering the Arctic, and none of them got a deserving funeral. Jared Harris, Tobias Menzies, and Nive Nielsen starrer is an unusually creepy series that is all about hope. Crozier sits in the middle of eye-hurting white snow. He couldn’t bury a single man of his ship, but he buried all the possibilities of him going back to Britain. If we sum up the series, it was too much to deal with. In the shoes of Caption Francis, it is a pang of unbearably heavy guilt.

Dr. Goodsir deserved a much better end, but all kneel to fate. The story is about two ships, HMS Terror and HMS Erebus. The men in the ships sailed towards the arctic in order to find a path that could ease the trade. Little did they know it would cost them too much.

Who survived in the ending of ‘The Terror’ Season 1?

The army of 129 fell to 1 alone in the end. Only Captain Francis survived. The series shows what happens when a man betrays his own men. Cornelius Hickey, the actual poison among the army, killed his soul for survival. But the question is, “What do we do with a soul-less life?” This man buried his soul to keep his body alive.

At the end of the series, we see Captain Francis sitting in the middle of snow-covered land and beside him is a young boy sleeping very comfortably. The end of the series was just as blood-curdling as is the entire series itself.

What happens in the ending of ‘The Terror’ Season 1?

Towards the ending of The Terror Season 1, the men on the ship are surrounded by deadly forces. One way or another, they will be dying. The freezing temperature wants them dead. The irresponsibly kept canned food wants them dead from the poison, and if not that, the mythical manlike creature wants them to be its meal. Scurvy is taking over. Wounds are bleeding non-stop. It is like nature has announced the death of each of them.

Now that the food is poisoned and the men only have two options: To die out of hunger and cold OR to be the meal for Tuunbaq (that they will become ultimately if they choose the latter too), anyone could guess they will give up on life already. But then comes Cornelius Hickey, tricking everyone into thinking that he is the savior, the leader with a survival plan.

After a while, everyone was convinced of the plan by Hickey. Little did they know, he was only trying to keep himself alive. With Hickey brutality taking over in the name of the last choice, Evil was brought upon them. A major and spine-chilling twist is introduced as Hickey decides to delve into Cannibalism.

Hickey comes up with his sharp mind and wittily states the situation as “Morals versus Practical.” He is too brave (dead) to tremble while speaking of eating his own species. He says, “A man must eat to survive, and uncanned food is limited and almost finished.” As Dr. Goodsir tells Gibson his disease is far from recovery, Hicky kills him. The cold-hearted leader orders Doctor to cut up the body so he and his men can have dinner. Losing his morals and himself, the Doctor deals with a lot of anxiety. He tried his best to save everyone from the illness.

Dr. Goodsir was no less than an angel himself for the entire crew. He tried his best to save his men from the spreading illness and lead poisoning. But the way he was forced to carve a dead (murdered) body to serve the hungry men kills him inside. Out of all the men, Dr. Goodsir was the most morally upholding personality. Everyone loved him. Choosing to kill himself to put a period on Cannibalism and the “Hickey rule,” Doctor gave away his last breath with the intention to save the good ones. Goodsir washed his body with poison and consumed the same, hoping it would end Hickey and others who lived on Cannibalism. Even though it didn’t help the way he thought, Tuunbaq dies of the poison after eating Hickey and his men, leaving behind only one man alive, Captain Crozier.

The Death of The Dead: Hickey dies in ‘The Terror’

After burying his soul, morals, and conscience, Hickey leaves behind the weak and half-dead men waiting for death to arrive. He and his cannibal army lead their way to kill Tuunbaq. The men ate Dr. Goodsir’s poisoned flesh, and so one by one, they started vomiting blood, and Tuunbaq chewed all of them one by one. When Hickey witnesses Tuunbaq so closely, he cuts his tongue and offers it to Tuunbaq, assuming that the act would make Tuunbaq his pet. The plan fails, and Tuunbaq eats the whole arm along with the tongue and later the whole body of Hickey. Since the men (or better say cannibals) were poisoned, Tuunbaq starts getting weak too, and so the Captain succeeds in controlling the half-dead creature. Tuunbaq dies slowly, and Captain Crozier faints.

After the final fight between Tuunbaq and Hickey’s small army, along with forcefully included Crozier, Lady Silence discovers the dead Tuunbaq and severely wounded Captain. She tries to revive Tuunbaq by making it drink some water, but it is too late, so she turns to Captain and sees him barely breathing. She had to cut his hand in order to take him away for treatment. Once the Captain is able to walk, they both go back to the camp where the Doctor died, and many sick men were left behind to die. Lady Silence leaves the tribe as she finds herself lost after the death of Tuunbaq. She fades mysteriously.

Being a man who loved his men regardless of everything, Crozier chose to walk back to the camp after recovering. He walks to the camp with Lady Silence. Not all in the camp were dead. One of them was much more terrifying than the skeletal lean dead bodies-Lieutenant Edward Little! His face was strung with chains linking the ears. The idea of chains was adopted from the book only. There’s no debate, and The producers worked their best to present the finest haunting series. Although each actor perfectly played their role, Matthew McNulty literally outshined everyone. His dead eyes staring at Crozier was the most chilling and emotional scene. He dies, keeping his head on Crozier’s shoulder.

No More A Captain: Crozier Chose To Never Go Back

After finding out that Lady Silence had left the place once he got along with the people well, Crozier made his mind. He decided to become a part of the tribe. His only aim was to turn explorers back to their land by telling them the tragedic tale of ‘The Terror.’ Crozier refused to go back to Britain. Instead of going back home, he made a home. The series ended with Crozier sitting all empty while a young boy slept next to him.

Silna and Crozier: Was There A Chemistry?

In the book, Silna (Lady Silence) and Crozier are found romantically involved, but thanks to the producers for not making it even more unbearable for us viewers. When Lady Silence departs, nobody informs Crozier. Everything seems normal. No one was affected by her absence but Crozier (when he gets to know). He tries to know which way did Silna goes by asking each of the members, but no one replies to him. At last, he accepts the departure silently and makes peace with it.

The Terror is unforgettable, haunting, and fearsome. It is as if the best crew met the best cast, and they together delivered the best ever series. Each episode of ‘The Terror’ is perfectly filmed. This is a masterpiece.

The cast of ‘The Terror’ Season 1

In the cast, we have Jared Harris as Captain Francis Crozier, the only man who survived. Then we have Tobias Menzies as Captain James Fitzjames, Ciarán Hinds as Sir John Franklin, and Paul Ready as Dr. Henry Goodsir. Adam Nagaitis played Cornelius Hickey, the actual villain of the story. Meanwhile, Nive Nielsen played Lady Silence, aka Silna, and Matthew McNulty played the role of Lieutenant Edward Little.