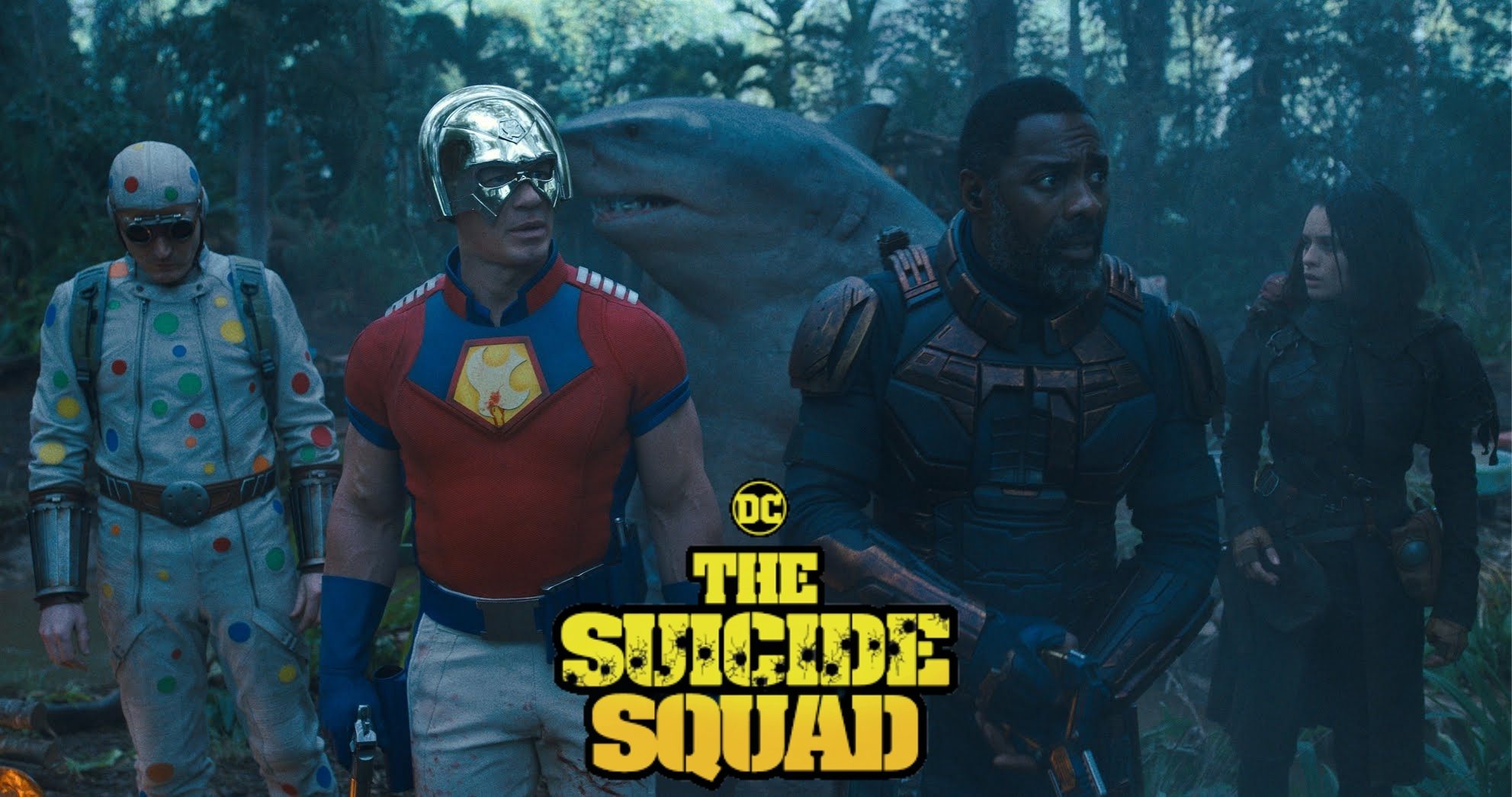 The Suicide Squad is the latest DC outing, based on the Suicide Squad comics. Helmed by Guardians of the Galaxy director James Gunn, the film features a staggering ensemble cast. The film serves as both a do-over and a sequel to the 2016 Suicide Squad. Like the previous one, the plot of the film revolves around a task force of convicts again. They have to find and destroy evidence of a giant alien called Starro. Among the immense cast are some characters that make a return from the 2016 film. Among those returning are Margot Robbie as Harley Quinn, Viola Davis as Amanda Waller, Joel Kinnaman as Rick Flag, and Jai Courtney as Captain Boomerang.

Like many others, I too ventured into The Suicide Squad with optimism. After watching the trailer, it was almost obvious that it was going to undo the debauchery of the superhero genre that was the previous Suicide Squad movie. After having watched the James Gunn do-over, I can claim that my optimism was justified. While the film doesn’t do anything revelatory in terms of the genre, it’s great because it delivers on the promise. This is to say that the film is all that the 2016 Suicide Squad should have and could have been. The film is a 2-hour long ride of madness. It is a bloody, funny, and blood funny affair.

The Suicide Squad stars Margot Robbie as the crazy Harley Quinn. Idris Elba stars as the mercenary Bloodsport. John Cena stars as a blindly patriotic member of the squad, The Peacemaker. Joel Kinnaman reprises his role as Captain Rick Flag. Viola Davis also makes a return as the head and supervisor of the Suicide Squad. The cast also includes Sylvester Stallone as King Shark. Peter Capaldi stars as the villain, The Thinker. The cast also includes David Dastmalchian as the Polka Dot Man and Daniela Melchior as Ratcatcher 2. That is not the end of the grand ensemble cast, though. The cast also includes Pete Davidson, who plays the role of Blackguard. Nathan Fillion plays TDK — The Detachable Kid, and Sean Gunn plays Weasel. Flula Borg plays Javelin, while Mayling Ng plays Mongal.

James Gunn has utilized the “R” rating meticulously and with every bit of panache. The graphic imagery is unabashed and unapologetic in its grotesque servings. The extremely graphic violence in The Suicide Squad is reminiscent of Gunn’s earlier works such as “Slither” and “Super”. He is evidently pretty good at depicting exaggerated brutality, which is exactly what he got to do this time. The ragtag team of violently efficient anti-heroes wreaks explicit chaos throughout the runtime. Well, I use “anti-heroes” loosely here since the number of innocent people the squad brutalizes in the film is insane. With that kind of kill count, calling them anything other than disposable soldiers feels like a misattribution. Anyway, I digress. Coming back on to the topic of blood, guts, and gore, the film uses it all to its advantage.

The shock value of the violence is used for humor and sometimes also treated as a punchline. There is a sequence where the squad infiltrates an enemy base, killing the bad guys in extraordinarily creative ways. Bloodsport and Peacemaker engage in a flexing competition over who can kill the enemy more creatively. When they’re done killing, a twist reveals that the people they just brutally exterminated weren’t, in fact, the bad guys. If you think that’s the peak of violence you’re gonna get in the movie; you’d be dead wrong. The violence that ensues later on in the film ups the ante even more. And it’s not just gunshots and grenades that spill the blood. There’s a whole man-munching humanoid shark. King Shark snacks on multiple humans throughout the movie. His appetite for humans, coupled with his dumb and childish personality, really makes him a highlight of the movie.

Apart from King Shark, a lot of characters get to shine in The Suicide Squad. One of the more notable performances comes from John Cena’s sternly patriotic “Peacemaker”. His overt patriotism makes him a perfect candidate for a standalone venture, which he will be getting pretty soon. Cena is soon to star in his own standalone series that will follow Peacemaker’s various missions. Idris Elba stars as the leader of the second suicide squad in the film and a rival to Peacemaker. Elba plays the role with his trademark charm and grit. Interestingly, in contrast with his gritty, broody, and dark persona, we also see a goofy side of him. His character, Bloodsport, has a phobia of rats, which produces a couple of funny moments in the movie.

For those familiar with the previous Suicide Squad film, his character will appear as a carbon copy of Deadshot, and they wouldn’t be wrong. Deadshot and Bloodsport are pretty much the same guy. Both of them are similar in terms of their skillset and even personalities. Both Deadshot and Bloodsport are dads who care about their daughters. Their daughters are who drive both their arcs and are integral in their motivations. One difference between them would be where they end up when the movie concludes. Deadshot gets a supervised visit with his daughter, plus the concessions as a part of the deal. However, he still remains in Belle Reeve. On the other hand, Bloodsport gets his freedom back at the end of The Suicide Squad. Meanwhile, Harley is back on her usual quirky and lethal routine. Daniela Melchior also shines as the Ratcatcher 2, especially in the denouement.

The Suicide Squad is a Great Improvement Upon the Original

The Suicide Squad improves upon a lot of things the Ayer’s version was panned for. Let’s start with the character introductions. Suicide Squad (2016) took too much time to introduce the drab characters. On the other hand, The Suicide Squad throws the characters into the warzone immediately. This decision allowed time for the movie to pack in a lot of humor and action from the get-go. Another thing would be the writing. While Suicide Squad’s writing was mediocre at best, feeling uninspired and unfinished, The Suicide Squad is very well-written. The jokes actually land, and the characters have a lot of heart. Even Taika Waititi’s small scene manages to evoke emotions. Furthermore, the villains are also written way better than whatever mess Enchantress was.

Whereas Suicide Squad felt super rushed and disjointed, James Gunn’s do-over transitions smoothly from scene to scene. There is a rhythm, style, and a clear direction that Gunn wants to go for here. This film also oozes with character. Meanwhile, the Ayer’s Suicide Squad only looked interesting in the trailers. I remember the trailers for Suicide Squad, cut to the beat of Bohemian Rhapsody, promising a ridiculously greater film than what we eventually got. With The Suicide Squad, the benchmark was low, and expectations, not that high. Another notable thing that makes this film so much better than the 2016 film is the rating. Gunn has embraced the adult rating and has gone full gun-blazing with the violence, making even Deadpool look PG comparatively.

The ending of The Suicide Squad has a mid-and a post-credits scene. As it happens, two members of the two different squads are still alive. The first one is Weasel, the disturbing human-weasel hybrid and a child-killer. He was considered dead as soon as he was pushed to plunge near the coast. He couldn’t swim and started to drown. Savant pulls a drowning Weasel and carries him out to the coast. However, by that time, Weasel stopped responding, and Savant saw that he was dead. Informing Waller of the same, everyone else proceeded to move forward to their eventual gruesome deaths. The mid-credits scene sees Weasel coming back to life on his own. He wakes up to find that he’s the only one there. The scene ends with him escaping the beach, squeaking creepily, probably in elation.

Weasel is not the only one who didn’t turn out to be dead, however. The post-credits scene reveals that Cena’s Peacemaker is also still alive. Two of Waller’s subordinates visit the hospital where Peacemaker is in an unconscious condition but alive and breathing. When the doctor enquires what they will need Peacemaker for, the subordinates say they will need him for “saving the world.” This scene points to the future spin-off series that will revolve around Peacemaker.