With Luna in the picture, what is next for Earth? Will Dr. Song and Luna be able to save it from the evil corporations and people? 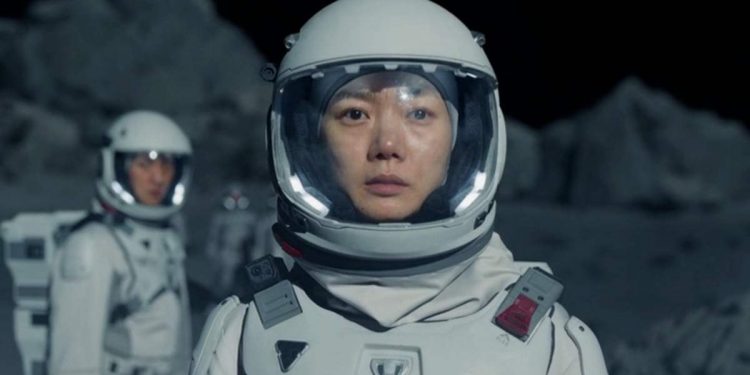 Netflix’s new Kdrama The Silent Sea joins the list of its most dominating TV series. With Squid Game and Hellbound already being its best programs, Netflix’s South Korean content is becoming a must-watch for its subscribers. The latest The Silent Sea is no exception. The Silent Sea was released on Christmas Eve and blew minds with its extraordinary set and plot. And fans wonder if The Silent Sea Season 2 is already in the works. The ending has a clear path to follow a new plot, which we might see in The Silent Sea season 2. Hence, further are all the details on the second installment of Netflix’s recent sci-fi hit.

The Silent Sea is set in a near dystopian future where the planet suffers from a lack of food and water because of desertification. In between the crisis, Han Yun Jae (Gong Yoo), a soldier of the space agency, is admitted to a team with the doctor Song Ji-an (Bae Doo-Na). The two need to travel to the moon to collect samples from an abandoned research station.

The Silent Sea is receiving excellent reception from Netflix subscribers. And it is indeed on its way to becoming another hit of the year 2021. So, make sure to watch the sci-fi drama before The Silent Sea season 2 arrives.

The Silent Sea season 2 does not have a release date right now. The Kdrama was released a week ago. Thus, Netflix will take its fair-share amount of time before considering a renewal. Moreover, the streamer analyzes the viewership statistics before giving a green signal to any program.

On the other hand, Choi Hang Yong keeps mum on his vision for season 2. During the interviews, the Silent Sea director has not spoken about the following season. Thus, it is hard to suspect the renewal of The Silent Sea at the moment.

However, if we were to determine the release date of The Silent Sea season 2, we can expect the sci-fi masterpiece to drop new episodes in 2023.

The second season will most likely have the same amount of episodes, mimicking the run time of former episodes. Also, they will be dropped at once, following Netflix’s natural policy.

The well-written script of The Silent Sea creates an “unsafe” environment for all the cast members of the drama. However, the audience cannot predict the exit of the main characters due to the drama’s not so compromising setting. That marks one of the beauties of the drama.

As for the cast of The Silent Season 2, fans will have to say goodbye to captain Han (Gong Yoo). The heroic center of the drama dies while saving Luna (Kim Shi-Ah) and the other crew members. The Train To Busan actor performed the final scenes exceptionally well, and he will be missed as Captain Han in the next season.

Apart from Gong Yoo, we might see doctor Song (Bae Doo Na), who Luna saved from the toxic element. And, the second season will also focus on Luna and the vents if she decides to return to Earth. The new season will demand new faces, and Luna’s enemies might join season 2.

Netflix will update viewers on The Silent Season 2 once it greenlit the series.

The Silent Sea S2 Plot: What To Expect?

Even though there is no renewal news for The Silent Sea season 2, the ending sequences of the drama can form the layout for the second installment. With Luna regaining senses, she can return to Earth with the two survivors. Furthermore, her very own existence can become the tool for the evil to carry out their sinister lives.

With the presence of doctor Song, Luna can attain and learn the meaning of her existence, and we might see the two bond and help each other while defying the vital forces. Dr. Song will also act as the motherly figure in Luna’s life, which might bring humanity back in participate 073.

In short, The Silent Sea season 2 plot would majorly focus on Luna, her superpowers, and the ways to fight the evil to save Earth.

Earth is suffering due to the lack of water, and lunar water might spike the problems meter. However, the environmental issues might get their commentary with new faces in The Silent Sea season 2.

The Silent Sea season 2 will answer multiple questions. However, some sequences from the ending of season 1 definitely deserve answers. The audience was introduced to a variety of complex vital points as the drama concluded. From Captain Han’s death to Luna’s existence, The Silent Sea ending was a mystery itself.

Luna 073 or more likely to get called Luna is the only surviving clone from the experimentation. Dissimilar to the other 72 kids, who died during the process, Luna not only got through the experimentation but also was changed by it. The 073 exhibit is super strong, can work through the lunar after, heal her own wounds, and her body produces antibodies, which can save others who came in contact with the lunar water.

Luna also bit Dr. Song to save her after the latter got exposed to lunar water. Captain Han and Dr. Song both consider Luna to be the savior of the Earth. SAA Chief Kim (Heo Sung Tae) told the duo that Luna would be observed at a Ministry of National Defense facility for the rest of her life. But, Dr. Song comes up with another plan, as she decides to send the lunar water samples to The International Institute of Space Biology, which is likely similar to the ISS. Under the mentorship and guidance of Dr. Song, Luna might be able to change the after of the Earth. Also, the two could develop an emotional relationship to give balance and hope to the drama.

Yes, Captain Han and our favorite Gong Yoo die at the end. As the lunar water rushes with force into his chamber, Capt. Han eventually burst out of his environment and is thrown out of the lunar atmosphere. Luna finds him and offers him a badge to return, but he denies it. Nonetheless, he gets a chance to see Luna free and roaming with her extra special abilities.

Moreover, he accomplishes the mission, feeling satisfied. From the very beginning Capt. Han and Dr. Song have had a motto: save Luna and the sample, ensuring hope for Earth. And it was successfully done despite him not being able to work on it ever again.

RX is an abbreviation for “Resource Exploration” for Space Mining and Planetary Development. It was first introduced in episode 2 as a transnational corporation. Furthermore, in the last episode, it was revealed that RX hired lieutenant Ryu and co-pilot Lee Gisu.

Cited bad for the mission, RX akin corporate-funded corporations of space mercenaries. They work to gather sources that can be sold to the highest bidder. In brief, they are pretty much bad for the entire mission.

Lieutenant Ryu and Lee Gisu bother worked for the RX. The latter was mentally in a wrong situation, but Ryu worked for personal reasons. Lt. Ryu was part of the Ministry of National Defense mission to close Balhae Station, who was okay with sabotaging the lives of hundreds.

After his issues with the government, he started working with the enemy. But, unfortunately, in The Silent Sea, he gets affected by the lunar water. While taking his last breath, he apologizes to Dr. Song, recalling his evil motive to kill her in the base doors.

The second installment does not have a trailer yet. The Silent Sea season 2 is yet to be renewed by Netflix. And, once it gets a green signal, we can expect to witness more “BTS” pictures from the set and soon a trailer. In the meantime, you can watch the first season.