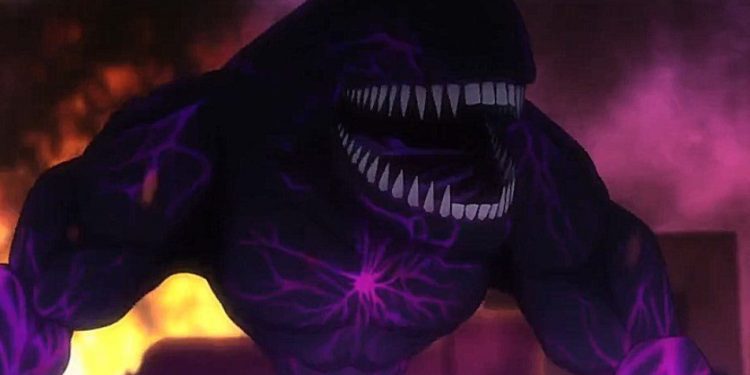 Shikizakura Episode 10reveals Enju taking on the boss of Nether World. Kakeru wields Ibara to face a new enemy emerging from the Nether Realm. Ibara realizes that he knew the enemy they were facing, which is more potent than they can imagine. The new enemy took a red crystal and swallowed it. Kakeru tries to fight, but he gets knocked out. Ibara’s powers vanishes, and Kakeru land on the ground. The enemy vanished and returned to the Nether Realm. In the latest episode of Shikizakura, Kakeru tries to communicate with Ibara, but Ibara doesn’t respond.

Kakeru notices that his bracelet is damaged and wonders what has happened to Ibara. The evil Ninjas chases a girl saved by a Samurai in another world. The Samurai slash those Ninjas before they lay hands on the girl. He asks the remaining Ninja if they think it is fair to gang up on a single girl. The boss arrives and calls the Samurai Myojin Enju. The boss asks Enju to surrender the Shrine Maiden. Enju refuses and says he rather die. The boss gets furious and wields his sword.

The underlings decided not to interfere and allowed Enju to go one-on-one with the boss. Enju clashed his sword with the boss’s sword. He managed to cut the face masks of the boss and appears behind the boss. The boss wonders how a mere human can hurt his face. In the present day, Takeru wakes up after recovering from a fight with the powerful, mysterious enemy that vanished. He notices that he is in a place that looks like the hospital and wonders what happened. Kakeru looks at his bracelets and realizes that Ibara has not said anything to him.

Ryo enters the room and finds that Kakeru is awake. Kakeru talks about the Yoroi and that Ibara’s armor protects him. Ryo reveals that they have a problem and reveals that the Nether Realm has swallowed the city’s base. Benion gathers everyone and talks about the Onis. She orders Ukon and Issa to join her face the Onis since they have come to strike them. Ryo thinks that he should get permission to join them. Ryo and his team wield their Yoroi and get ready for battle. Kakeru thought he could do that, but Ibara didn’t respond.

Ryo tells Kakeru to protect Lady Oka since he can’t form a pact with Ibara. Kakeru accepted that and stayed with Oka inside the hall. The whole team heads out to face the rampaging Onis. Oka consoles Kakeru after noticing that he wants to join the fight. She tells them that they will return. An Oni invades the hall and appears behind Kakeru and Oka. Kakeru wonders how to protect Oka since Ibara is not communicating with him. He tells Ibara to respond since they are in danger. The Oni attacks and Kakeru closes his eyes. But Benio returns and slices them in half.

She decided to stay with Kakeru and Oka since no one could protect them. The Onis hide and Benio heads to the HQ to talk with the higher-ups in the morning. She tells them that the Onis had a purpose after attacking them. Benio reveals that all the Onis they have defeated were targeting Oka as someone has ordered them. The higher-ups ask about Ibara, and Issa reveals that Ibara is not responding. The leader told Benio that the time had come, and they had to do the ritual in the morning.

Shikizakura Episode 10 will be released on 12 December 2021. Benio thinks that the Shrine Maiden Ritual is taking place too soon. The leader tells her that they have to act quickly, or Oka will fall on the hands of Onis. They realize that the Nether Realm will consume the whole world if they delay things. The boss of the Onis arrives at the temple where the ritual will take place. Let’s look at Shikizakura Episode 10 official details.

Also Read: The Swordmaster Take on a Ruffian In Episode 11 of The Fruit of-Evolution Before I Knew It My Life Had It Made.

Money Heist Season 5 Part 2 Ending Explained: Giving Back The Gold Was Part Of The Plan