Her secret is bound to be reveled one way or another! 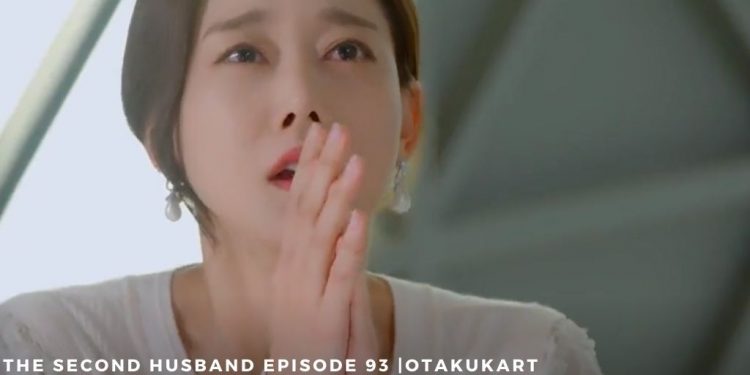 The Second Husband Episode 93 is just a few days away! Fans are waiting for the moment where Jae Kyung’s secrets are revealed. It is time for Jae Kyung to start worrying because Seon Hwa has found out the truth about Sae Byeok’s adoption and wouldn’t be staying still for long. Although Seon Hwa couldn’t figure out Jae Kyung’s schemes, it looks like Jae Kyung’s step-brother Jae Min knows what will be her next step. When Jae Kyung found out that Seon Hwa might have asked to get her and Tae Yang’s DNA checked, she came up with a plan in a hurry. She rushed into the office and told the guard to stop the deliveryman to who Jae Min had handed the documents to. After that, she quickly headed outside the building and told the deliveryman that Mr. Yoon said that he had accidentally given him the wrong documents.

She gave him some money and exchanged the documents. She didn’t know that Jae Min already knew that she would come up with such a plan and had come up with a backup plan since the start. After Jae Kyung left thinking she had successfully implemented her plan, the deliveryman called Jae Min that their plan had gained a victory. So what plan did Jae Min come up with?  Jae Min had already alerted the deliveryman about what Jae Kyung might try to do. The deliveryman handed the documents safely to the research institute. And when Jae Kyung had found out that the DNA test had happened, she couldn’t hide her astonishment. She shouldn’t have had underestimated Jae Min’s cleverness in the first place!

Don’t forget to see what Jae Kyung might be planning next and check out the release date, streaming details, and predictions for The Second Husband Episode 93.

The Second Husband Episode 93 will be released on 28 December, this Tuesday. Ever since the series has started, fans have been looking forward to watching the episodes of The Second Husband all most every day. The audience has been curious whether the revenge-filled Seon Hwa will be finally getting to take her sweet revenge. In the recent episodes, many of her and Jae Kyung’s secrets have been revealed to one person in particular. That person is Hae Ran, the biological mother of Seon Hwa and the stepmother of Jae Kyung. Mentioning Hae Ran, fans are dying to see how and when either Hae Ran or Seon Hwa finds out that they are biologically related.

Where To Watch The Second Husband Ep 93?

Korean viewers can watch the episodes of The Second Husband on MBC Mon-Fri at 7:15 PM KST. There is no doubt that the kdrama has recently caught the eye of K-netizens. Seeing that the kdrama usually gets 10% average nationwide viewership ratings, it is evident that the kdrama is becoming a hot topic. Moreover, the international fans can watch the kdrama either on Rakuten Viki or Kocowa. To watch on either of these streaming sites, a user would need to have a standard subscription. The release time of the 93rd episode in the USA, 10:15 AM in the UK, 3:45 PM in India, and 8:45 PM in Australia. Don’t forget to watch the episode!

The Second Husband Episode 93 is just a few days away. As already mentioned, Jae Kyung was shell-shocked when she found out that the similarity of the DNA test of Seon Hwa nad Tae Yang was 99%. It turns out that Jae Min was a step ahead of Jae Kyung the whole time. In the preview, you could see the worry in her eyes when Yoon Dae Guk asked how does Tae Yang have blood type RH negative O when none of his parents have it.

Plus, it looks like Seon Hwa has been planning something. When she and her friends were planning to steal the painting that Jae Kyung was going to sell to get money for J Town’s construction, Seon Hwa interrupted her friends by saying that she would be buying the paintings instead of stealing them. What does she have in mind? Surely she has planned something sly.

When And Why Did No Doubt Break Up? Where Are They Now?