The year-end SBS Entertainment Awards 2021 was conducted a couple of days ago, carrying the decade-old legacy, about the complete list of winners here! 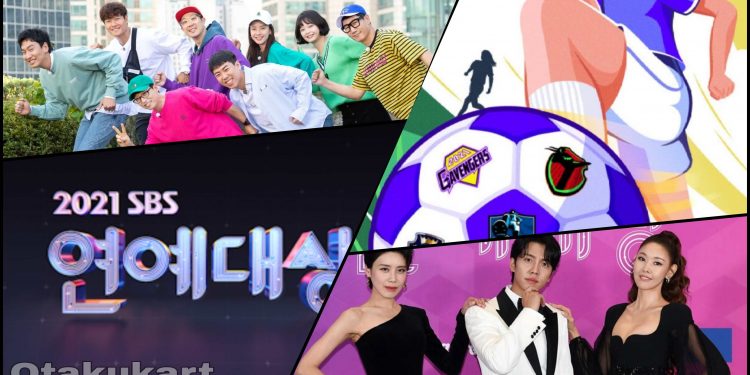 SBS Entertainment Awards has been one of the most prestigious award shows of the Korean Entertainment industry, held every year in December. This special ceremony takes place to honor some of the best entertainers in the industry. Last year, the award show was hosted by one of the best comedians in the country, Shin Dong-yup, and two of the well-known actors and singers, Cha Eun-woo and Lee Seung-gi. While the spectators, as well as the critics, praised the MCs for their amazing job, this year, only Lee Seung-gi had returned as the MC for SBS Entertainment Awards 2021. Comedian Jang Do Yeon and Han Hye Jin, who is a popular model and TV personality in South Korea, had replaced Cha Eun-woo and Shin Dong-yup. The good part is— the MC lineup didn’t disappoint at all! In fact, the viewers got to experience very refreshing chemistry between them.

The event took place on the Saturday night of December 18, 2021, at the SBS Prism Tower in Sangam-dong, Seoul. Everyone from within the country owned the privilege to watch the entire ceremony live on SBS TV at 8.35 PM KST, while the international viewers can now stream the show online on the official website of the broadcasting channel and Kocowa TV. This year, we got to witness the win of some of the most unexpected personalities, evident from how even the winners were shocked to hear their call on the stage for receiving the award. However, it was satisfactory to see their hard work and exceptional talents of them pay in the end. On the other hand, it was cool to watch shows like ‘Kick a Goal’ ‘Running Man,’ and ‘Same Bed, Different Dream 2 -You Are My Destiny’ manage to empty almost an entire rack of trophies alone!

Performances of the Night

The rising South Korean girl group ‘Aespa’ opened the award ceremony with a grandeur, giving delivering an explosive performance on their record-breaking single ‘Next Level’. For favoring an eye-catching performance to their song, this year, they introduced a meta-verse along with sets and stages. Aespa’s performance was followed by an amazing singing performance by Shin Hyo-bum and Jee Seok-jin on ‘I Knew I Love’. The live audience even got to witness Kick A Goal’s FC Old Tall setting the stage fire on Montero x Hey Mama. The beautiful and talented singer Song So-hee concluded the performances of the night by singing ‘3! 4!’ by Roo’ra, along with the rock band Se So Neon’s Hwang So-yoon.

While the award night was attended by some of the most notable stars of the entertainment industry on the SBS Entertainment Awards 2021, the audience was thrilled to get to witness the appearance of the K-pop boy group ASTRO’s vocalist and ‘True Beauty’ star, Cha Eun-woo! He, along with Jee Seok-jin, presented the Rookie Award to Park Ha Sun for ‘Cine-Town’. Cha Eun-woo is one of the most popular K-pop idols of the current generation and has himself won multiple awards for appearing in different variety shows. Kim Tae-gyun, Park So-hyun, An San, Yang Se-hyung, Kim Byung-ji, Choi Yeo-jin, Yang Se-chan, Jeon So-min, Bae Jung-nam, Keum Sae-rok, Lee Kyung-gyu and Yoo Hyun-joo are few of the other presenters for this year’s award show.

Daesang or the Grand Prize is the highest honor of the ceremony, handed over to the best actor or actress of the year. While last year, Namgoong Min took home the Daesang for the 2019 sports melodrama, ‘Stove League,’ this time it was taken away not by an individual person but the whole team of ‘My Little Old Boy,’ the television program which has been on-air since 2016. Currently hosted by Shin Dong-yup and Seo Jang-hoon, the show follows the mothers of celebrities, who observe what their sons do, whom they meet, their behavior, and record the memorable moments safely in their ‘Mom’s Diary.’ The best part of the show is that it is not entirely based on the lives of the celebs but also lets us witness their mothers’ reactions and commentaries.

Variety Star of the Year

Here is the complete list of award winners of SBS Entertainment Awards 2021 other than the ones mentioned above. Have a look at it:

Well, all the above-mentioned shows definitely deserved to win, considering how unique and entertaining they are! ‘Kick a Goal’ is a sports reality show based on all-female celebrities and non-celebrities competing in teams to play soccer matches against each other. While most of the participants don’t have much experience in soccer, getting coached by some of the most skilled Korean soccer legends definitely helps them glow with passion and determination. Even the least sporty person would enjoy such an exciting female comradery!

And… Don’t we all love watching ‘Running Man!’ This fun variety show has been airing for the last ten years with an episode count of more than 600 and still now, so many people wait patiently to get a glimpse of the newer episodes. The show’s concept is quite simple— members of the show compete in an array of games and missions every episode, joined by celebrity guests at times. However, only those who watch ‘Running Man’ knows how addictive and funny the episodes are!

Will Soo Ho Be Able To Dance His Way Out Of Trouble In ‘Snowdrop’ Episode 4?