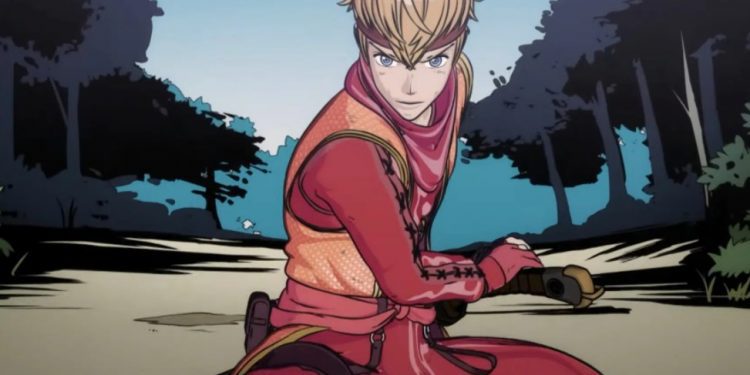 Rusted Armors Episode 2 reveals the unending war across all of Japan. The Muromachi Shogunate continues this war has been happening for many years. The conflicts arise between feudal lords around Japan. The knights traveling in the Saika forest wondered if there were demons after hearing something. They talked about the troop that came before them, and none of those guys returned alive. The other knights who didn’t know about that realize that they might be in danger. Rusted Armors’ latest episode reveals the Saika feast on animal flash and enemies.

The commander told the knight to stop scaring them since the mission awaited them. The crow nearby records everything and sends the signal to the Saika. Kurohyo of the Saika notices the knights and gets ready to attack. Kurohyo uses his armored arm that fires bullets at the knights. Some knights decided to retreat and say they didn’t sign a dying contract in the forest. Ageha of the Saika blocks the path of the knights that were about to retreat. The knights ask who is that beautiful lady chasing them. One of them thinks they can toy with that lady since they have already lost the war.

The knight believes that no one will find out that they ruined the honor of a woman. Ageha asks them if they are dreaming and kill them. On the other side of the forest, Hotarubi and Tsuru of the Saika battle with a group of knights. Hotaru thinks Tsuru should have stayed behind him. Tsuru noticed that Hotaru was bragging after defeating a few warriors. He kills the knight that almost cuts Hotaru’s head and reminds him to focus. Hoto of the Saika smiles sitting on the tree branch, and the crow lands on his shoulder.

The commander was surprised that a group of fewer than ten guys had defeated a force of 300 men. He realizes that his knight was telling the truth and calls those men the Saika demons. The commander begins to escape and realizes that he can call for reinforcement. Deku of the Saika uses a bazooka to blast the commander. He noticed that the commander and his men were wearing stupid costumes. Deku reminds Magoichi about the boss that would escape. Magoichi used his sword skills and said the boss wouldn’t run away.

Magoichi blocks the boss’s path and asks the boss if he is not ashamed to leave his men behind and he is unworthy to be called a leader. The boss thought that a blond brat couldn’t defeat him. But Magoichi cuts the boss before he makes a single step. The Saika demons head home and realize that they had a great warm-up beating those punks. They reveal the Saika village where they live and protect men and women who make a living there. They head to the hot spring and relax, realizing they will face the enemies soon.

The Saika demons know that the feudal lords and different bandits invade the village to take it over, but they always set traps for them and defeat them. Deku and Magoici had fun, and Deku believes that Magoichi has changed. He realizes that Magoichi was different when he moved to the village three years ago. Magoichi realizes that he can’t tell the difference. The Saika demons use weapons that are enhanced with Ryumyaku. Ryumyaku gives them powers that are beyond human limits. Magoichi has lost his memories and remembers things in the present time.

Rusted Armors Episode 2 will be released on 16 January 2022. Deku punched Magoichi since he was thinking about something. He reminds him to be happy since they have won the battle. Tsuru and Hotaru went to the shrine and prayed. Hotaru realizes that Tsuru treats him like a kid and admits that he will never be stronger than Tsuru. Tsuru told Hotaru that he would protect him and Hotaru believed that he was capable since he was the Saika. Let’s look at Rusted Armors Episode 2 official details.