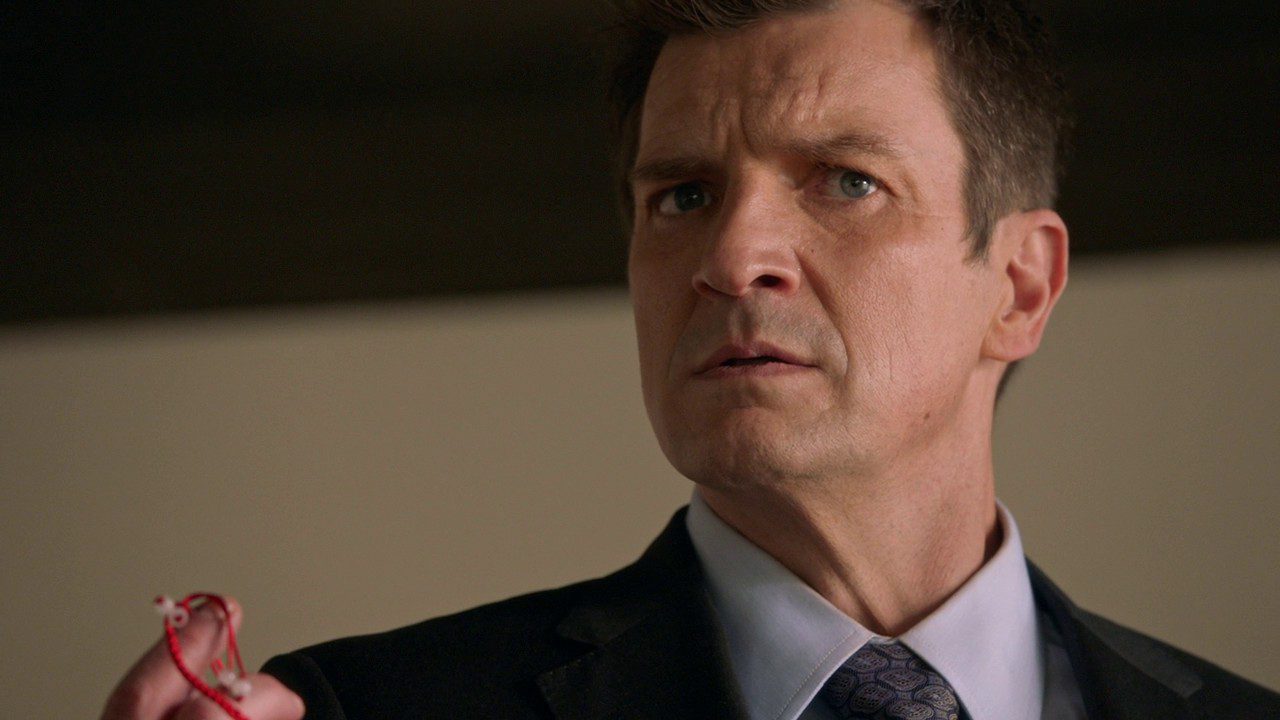 The Rookie Season 4 Episode 1 will pick the traces of Angela’s abduction right from her own wedding. It seems like the ghosts of the recent case have not backed down from a fight. Yes, La Fierra found herself trapped in the hands of Harper. But someone helped her escape and, in turn, caught one of the cop’s own. So basically, what happened? Harper had assigned Lucy on this case. She had to pose as a cook and make sure to attract the one who would be ready for it sooner or later, thus laying the trap. Furthermore, someone did walk in.

They got Lucy under their hands but didn’t know the game she was playing. They robbed a chemical facility, but a third party came in trying to take over, and Lucy had more than just one thing to handle at that time. Apart from that, Nolan and Smitty were working to track Cesar down. But when they did meet him, shots were fired. So what exactly went down in the finale of The Rookie Season 3? Who was the third party? Who abducted Angela and what we may see in the coming The Rookie Season 4 Episode 1. Let’s figure it out.

Last time on The Rookie, we opened up to Lucy’s first undercover mission. Harper made sure to let her know all the ins and outs. Right from where she will be staying to what she will be doing. Meanwhile, Nolan’s day starts with a woman with just a towel on her knocking on his door. Unfortunately, she had locked herself out as she was babysitting at neighbors. So Nolan helps her and in turn, they start connecting making time for their first date as well. At the same time, Angela faces a crisis when her wedding venue is taken over by the FBI. 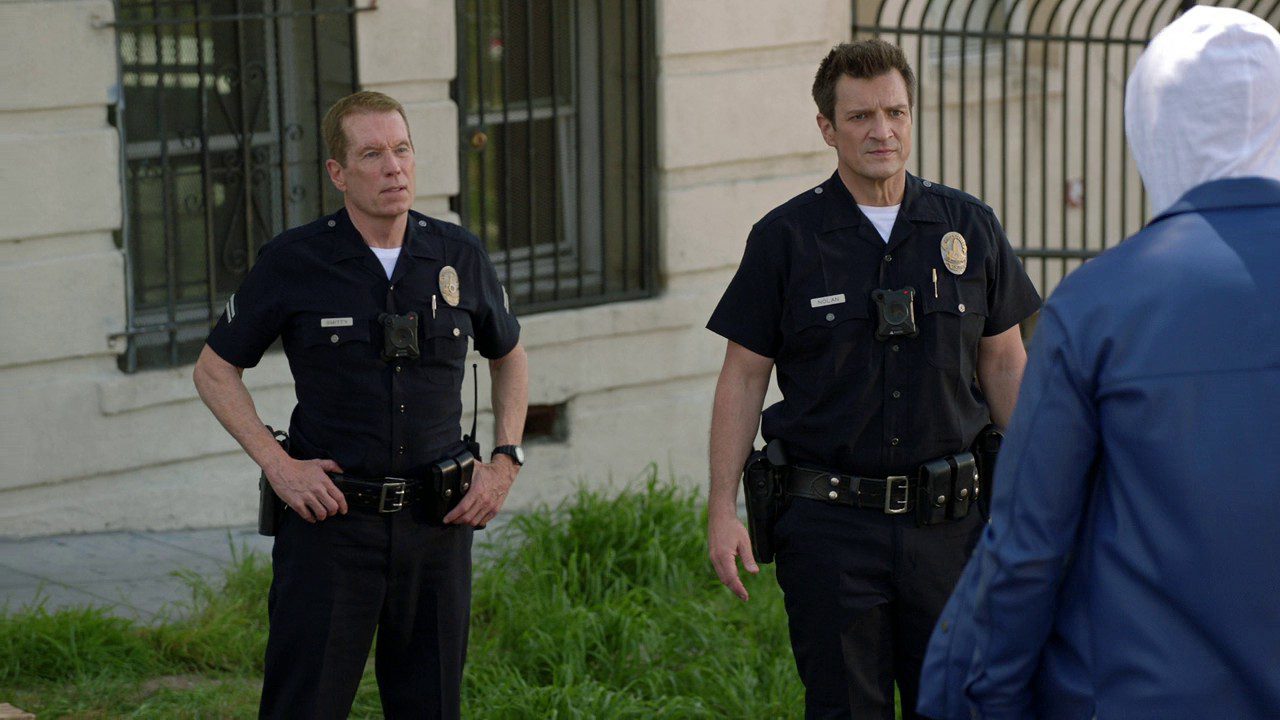 From The Rookie Season 3 Finale Featuring Nolan and Smitty

Angela decides to get married anyway on Saturday. So Wesley brings her mother in. Silas and Tamara will join her to set up the wedding. Now coming to the cases going on in the episode, Nolan tracks Cesar’s girlfriend hoping to receive some info and tells her that La Fiera will be coming after him. Lucy’s cover finally works when a man named Dahrio asks her to cook. Despite denying at first, she agrees and even earns their trust by her own hacks when Tim and Jackson stop her midway on the run.

Tim, on his side, gets the note Lucy and lets Harper know. Plus the fact that the trio is about to rob a chemical facility. Which one is the question? The robbery is successful, and the trio takes over one of the chemical facilities. The cops believe it could be Sutherland Chemical due to a sudden alarm. Upon Reyna’s directions, Nolan and Smitty approach Cesar. What follows is a sniper taking Cesar down. 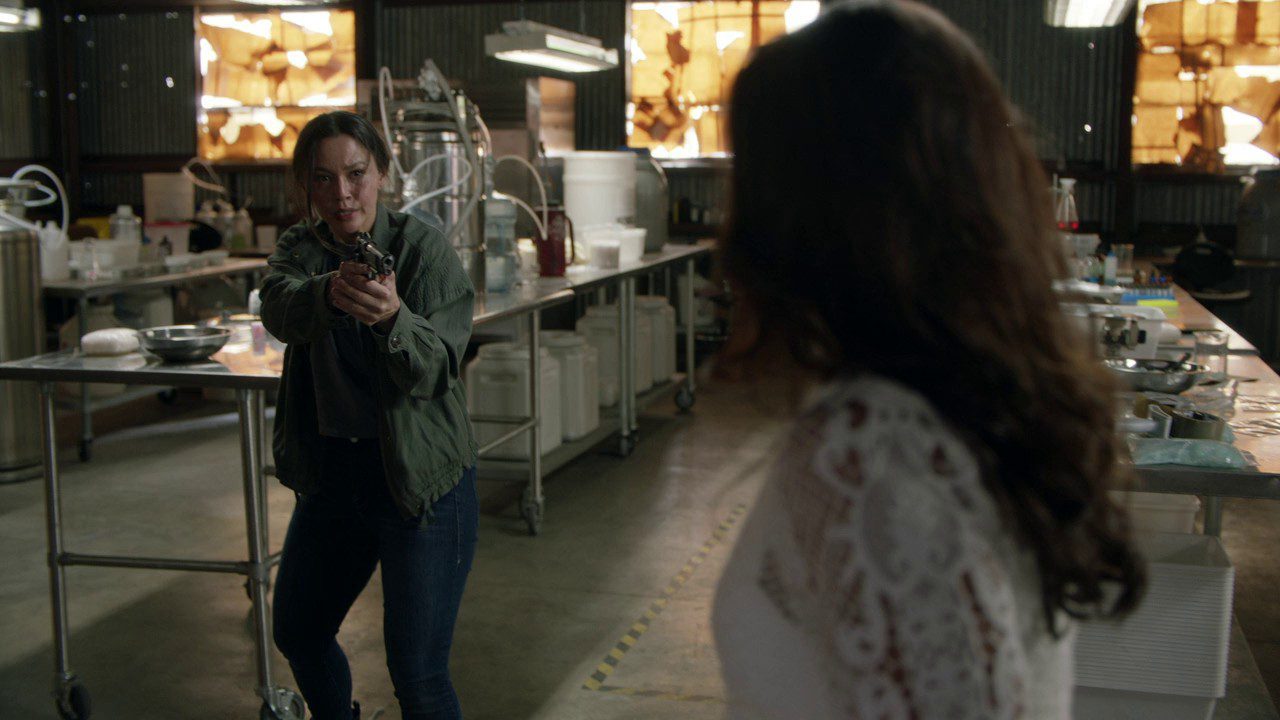 Tim plans to pull Lucy out, but Harper hopes to have a heads-up from her first. Back to Lucy, she cooks one batch until she hears shots outside. She takes her time to call Harper. Then La Fierra makes her entrance only to see cops surrounding her. The final moments see Angela’s wedding and, at the same time, a couple of masked men rescuing La Fierra from cops custody. One of them drops by Angela’s wedding to put a gun on her. Nolan finds the couple missing to close the season.

The Rookie Season 4 Episode 1 is releasing on 26 September 2021. The episode is titled “Life and Death”. The official synopsis of the episode hints that it will pick right after the moments where Season 3 closed.  Jackson and Angela are abducted, and Nolan and his team gear up to track them down. It’s the wedding day, and nothing can go this bad. They are saving not just one life with Angela but two with the baby inside her. Apart from that, keep your eyes on La Fierra as the masked men rescued her on the other side. It may have something to do with her connections. Check out the preview for The Rookie Season 4 Episode 1 below.

The Rookie Season 4 Episode 1 will be airing on ABC at 10:00 p.m ET. The total number of episodes for the fourth season of The Rookie remains under wraps for now. We are expecting the show to go at least 20 episodes this season, owning to things that have cooled down for shoots since the pandemic began. Anyway, expect new episodes every Sunday following the first for The Rookie Season 4.