From calling Sung Deok Im 'my person' to instructing his royal guard to protect her, Yi San cannot hide his feelings anymore. At this rate, we might get to see an official confession in The Red Sleeve Cuff Episode 7. 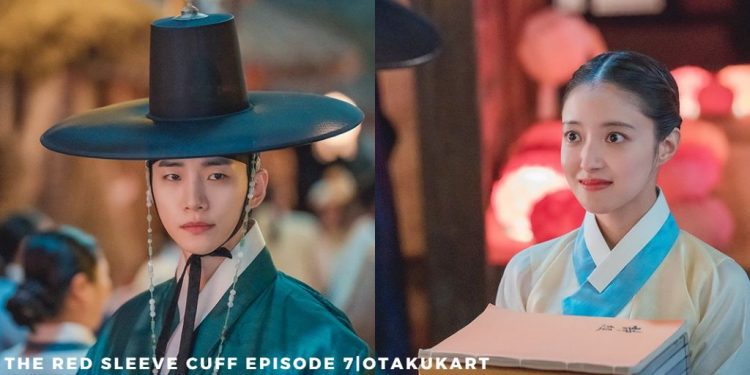 The Red Sleeve Cuff Episode 7 will soon be airing, and fans cannot hide their excitement. It feels like just a few seconds ago, and Sung Deok Im was shooing away Yi San with a broom. And now, they have escalated to being each other’s protectors. Fans are immensely surprised and incredibly thankful that the two of them did not take the long road to romance. In the previous episode, we saw the Crown Prince give a piece of his heart to Song Deok Im by offering her his favorite books. And if that was not enough, he asked Sung Deok Im in all his greek God glory ”Am I captivated by you?” With this line, Lee Jun Ho proves yet again that he was born to rule our hearts.

Each episode, the show manages to amaze its fans with its sweet romance and its awesome comedic timing and insights on a court lady’s life. Although the show remains light-hearted in most moments, with the palace politics and the high-level riddles, it always keeps fans on the edge of their seats. By using her high caliber, Sung Deok Im has saved her and the Prince’s life two times in a row. But will this continue to be the case when the Prince decides to make her a concubine? Make sure to watch The Red Sleeve Cuff Episode 7 to find out.

This historical MBC drama has fans eagerly waiting for the release of its next episode. Thankfully for fans, The Red Sleeve Cuff Episode 7 will be released on December 3. This historical kdrama is based on real events that took place in the palace of King Jeongjo of Joseon. The drama focuses on showing the viewers how the court ladies at the palace lived their lives. Their main principle is to look after their master and not dwell on anything too much. However, Sung Deok Im, who is a 9th rank court lady, refuses to follow this principle and wants to take all her decisions by herself.

But when she falls in love with the crown prince, Sung Deok, Im will have to make a difficult choice. ‘Draw closer if pulled and move further if pushed,’ Sung Deok Im reminds herself after the Crown Prince rejects the idea of marrying a subject. However, he soon makes up for it by trusting her with the task of convincing the Queen to help him. Fans are super excited to see The Red Sleeve Cuff Episode 7 to see how their relationship progresses.

Where to Watch The Red Sleeve Cuff Episode 7?

This Lee Jun Ho and Lee Se Young starrer drama is exclusively broadcast on MBC. Furthermore, The Red Sleeve Cuff airs at 22:00 according to Korean Standard Time. Which is 6:30 pm in India, 8:00 pm in the United States, 12:00 am in Australia, 1:00 pm in the United Kingdom, and 8:00 am in Canada. With its perfect romance, storytelling, and fun moments, it is no shock that The Red Sleeve Cuff is winning the viewership rating race. Never have the audiences seen a historical kdrama with such a progressive theme.

How Sung Deok Im chooses to be the writer of her own destiny and refuses to be afraid when she has done nothing wrong is truly commendable. Moreover, with her quick thinking, she has not just impressed the Crown Prince but also the King and the Queen on various occasions. You can watch Sung Deok Im’s remarkable courage in The Red Sleeve Cuff Episode 7 on Rakuten Viki.

Sung Deom Im Has An Admirer

You heard it, right guys, Sung Deok Im, the steadfast court lady, has an admirer. And it is none other than the Crown Prince of Joseon. After saving her from being beheaded, Crown Prince Yi San gives her an earful for spying on him and getting herself into trouble. He also criticizes Sung Deok Im for thinking so poorly of her master and tells her to vacate from the castle grounds immediately. However, our quick-witted court lady starts telling him how she has never seen a man of such high virtue. This melts the Crown Prince’s heart, and he decides to let her go. Yi San further proceeds to give Sung Deok Im some of his favorite books and even offers to explain the difficult parts.

But a confused Sung Deok Im thinks that the Crown Prince is punishing her and says that she is grateful for his kindness. Yi San is bewildered that his kindness was mistaken as a punishment. He looks at her with honey-sweet eyes and confesses that he cherished the time they spent in the library. Not just that, but he also asks Sung Deok Im if she was captivated by him or was she the one who won him over. Fans cannot get enough of the tom and jerry chemistry the couple share. Their banter never leaves room for a dull moment. Make sure to watch Red Sleeve Cuff Episode 7 to witness more of such cute moments.

As expected by Lady Hye Gong, the news spreads that the Crown Prince has been visiting Courtesan houses regularly during the nights. When Yi San’s aunt, Princess Hwa Wan, hears about this news, she wastes no time in bringing the news to the King and winning his favor. She always wanted her son to become the next heir to the throne. She does not just stop by informing the King but goes out of her way to get evidence and demands that the Crown Prince be dethroned.

Hearing about this, King Young Jo gets extremely angry and imposes a restraining order on him. The King does not just stop there and beats the Crown Prince. During his most vulnerable moments, Sung Deok Im stayed by his side and promised to protect him. At that very moment, it is clear through Yi San’s eyes that his feelings towards Sung Deok Im are not just mere attraction. He sweetly calls Sung Deok Im ‘my person,’ to which she blushes and runs away.

Sung Deok Im and the Crown Prince discussed their strategies on how to prove his innocence. If the Crown Prince continued to be confined, then Princess Hwa Wan would pull up tricks to steal his position. This leads to Sung Deok Im delivering a very important message in the Dondeok Order Meeting.

However, Sung Deok Im quickly realizes that she will need a greater source to lift the restraining order on the Crown Prince. Sung Deok Im decides to get Queen Jung Soon’s help to free the Prince. But just like all good things come with a price, Queen Jung Soon tells Sung Deok Im to dig up some dirt on Princess Hwa Wan. Being the capable and intelligent court lady that she is, Sung Deok Im finds out that Princess Hwa Wan has bought silk from the Qing dynasty. This information comes in handy because the Joseon silk festival promotes silk hand-loomed in Joseon.

Furthermore, Queen Jung Soon decides to take all her anger out by slapping Princess Hwa Wan in front of everyone, using the Qing silk as an excuse. This scene made us all sigh in relief because Princess Hwa Wan always keeps stirring up trouble. In conclusion, Sung Deok Im wins the Queen’s favor and the Queen, in return, convinces his majesty, King Young Jo, to release the Crown Prince.

In the previous episode, The Red Sleeve Cuff blessed us with one of the most iconic jealousy moments. We already know how Yi San is whipped for Sung Deok Im. When she tells him that Queen demands her presence, Yi San is moody and upset the whole day. Not only does he miss Sung Deok Im, but he also witnesses something that makes his stomach churn. His favorite court lady, Sung Deok Im, and his friend and tutor Hong Deok Ro were standing close to each other on the bridge.

To his further annoyance, Hong Deok Ro whispers something in Sung Deok Im’s ears. After witnessing this scene, Yi San can’t help but be annoyed all day. The Court Ladies attending to him were running left and right in distress. They finally decided to bring Sung Deok Im to calm the Prince down.

Sitting in the bathtub, with his glorious six-pack abs on display, the crown prince gets flustered when he sees Sung Deok Im enter. He wastes no time in asking her why she was so close to Hong Deok Ro. Instead of holding back, Sung Deok Im counterattacks him. She asks him why he does not do anything to stop his teacher from harassing the court ladies.

What Yi San says next has us all swooning. ”You are the only one I care about” if this is just a sweet line. Then fans can’t help but wonder how great will the official confession be in The Red Sleeve Cuff Episode 7.

Collin Morikawa Engaged to Katherine Zhu: Has The Golfer Couple Planned To Get Settled?

Where Is Unsellable Houses Filmed? All About The Show’s Filming Locations!