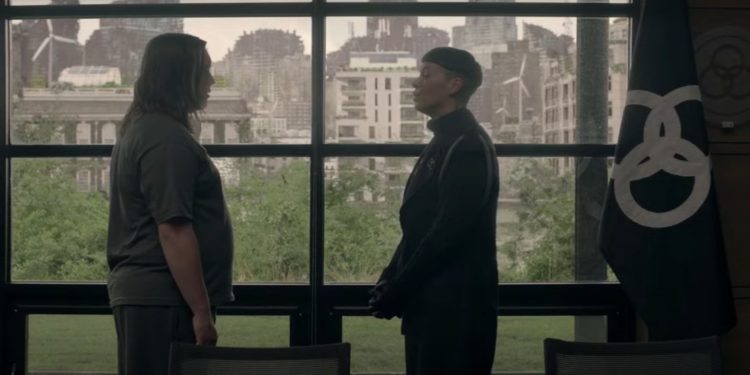 The exciting climax of this series is about to show up on our screens and how are the protagonists fighting through zombies and foes in The Walking Dead: World Beyond Season 2 Episode 10? With the penultimate episode airing as the team escaped the CRM. To begin, the Bennetts didn’t actually leave, but instead tricked the militia into thinking that they were in the tunnels, had them follow, and then blew the tunnel up. Smart.

Then they used Mason as a diversion. After that Leo negotiated for the CR to give them cars to move out. Something to which Jadis reluctantly agreed to and it’s up to this point that every man is for himself in the future. Furthermore, Leo left with a bunch of scientists, and his daughters stayed behind. The conclusion of the series is almost here and what to make of it is just around the corner.

The Walking Dead: World Beyond Season 2 Episode 10 will release on December 5, 2021, on AMC at 10:00 PM, Eastern Time, United States of America. Firstly, this will be the last episode of the series. Secondly, it was directed by Loren Yaconelli out of a script penned by Maya Goldsmith, Carson Moore, and Matthew Negrete. In this upcoming episode, the final loose ends of the plotlines come together, and the remainder of the group fights back all enemies, alive and dead.

This season, World Beyond has focused on the Bennett clan and their struggle to understand what CRM is all about. They have done some extensive undercover investigation with the assistance of their pals and other allies to discover that the CRM is quite the outfit that’s also researching on the undead and have devastated Omaha with intentions to do the same to Portland.

Where can I watch The Walking Dead: World Beyond?

If you missed the program when it aired on AMC. You won’t be left behind, thanks to the wonders of the internet and the contemporary world. To begin, you may watch the program using your cable subscription credentials. If you’re unsure how to utilize them, speak with your cable provider. Second, you may watch the show with a premium subscription on platforms such as Fubo TV, DirecTV, YouTube TV, Sling TV, and Philo TV. You may also watch World Beyond if you have an Amazon Prime Video membership. Following that, we’ll go through the latest episode in depth.

Jadis was dismayed to discover that Leo and company were detonating explosives all over the area, killing many CR troops. She was even more dismayed to find that the escapees had Major General Beale’s son, Mason, in their custody. But, seeing no other option, she agreed to Dr. Bennett’s request for two transport cars so that he and his fellow rebels could flee to the hills. “May I be the first to congratulate you for dragging a lot of brilliant people into a breathlessly foolish death mission?” she couldn’t help herself.

While Leo and his colleagues fled, Felix and Hope went out to eliminate the gas that the CRM meant to annihilate Portland. There was just one problem: it was no longer where it had been. Jadis had predicted that they would attempt to rescue Portland, so she had it relocated. (Not Portland, but the gas.) Meanwhile, Percy suggested that he and Iris went to the Getty Museum when everything was all done. Then, she reasoned, “We could produce our own crops” on the lawns.

The problem with Iris

Iris. Which was never going to happen, according to the Walking Dead rules. Silas restrained Dennis at the culling station so that Elton could extract the bullet trapped in his six-pack. He still needed medicines — certain things, even fantastic abs, can’t cure — so after directing a swarm of walkers to CRM HQ, Silas and Elton paid a visit to the research center. With all of the troops occupied with dealing with the incoming column, cadet Webb was left to maintain watch, and he took his duty so seriously that he threatened to kill his old friend and ended up getting devoured by walkers. Off the screen.

Felix, Iris, Hope, and Percy, together with captive Mason, eventually found themselves in a fight with Jadis, her warriors, and double agent Huck. Felix wanted Jadis to let them leave, and then they’d let Mason free when they were safe. But, unfortunately, she couldn’t — and didn’t need to — consent to it. “There’s you, and there’s us, and there’s a massive column of the dead approaching,” she observed. Let’s see who is the first to blink.”

Meanwhile, Silas (played by Hal Cumptson) and Elton (played by Nicolas Cantu) help Dennis (played by Maximillian Osinski) recover from a gunshot wound. They extract the bullet, but he instructs them to go aid his buddies, leaving him alone. As they drive away, Silas inquires whether Elton has a map of the research center, stating that he wants to “make a stop.” Meanwhile, a massive “column” of walkers chases them.

A battle of wits in the lab

Hope (Alexa Mansour) and Felix go into cold storage at the research lab in the hopes of eliminating the gas CRM plans to deploy on Portland. There is a slew of frozen walkers there, but no gas, thus their quest is doomed. At least Silas and Elton have some success: they go into pharmaceutical storage, presumably for Dennis, and obtain what they need. They then flee the walker-infested CRM by…running like hamsters in a metal earth sculpture. So, how about that?

The rest of Team Bennett must go as well, and their exit is not as peaceful. Felix assures Jadis, who joins them on the way out, that he’ll give Mason to them as soon as they obtain a vehicle. Jadis refuses to accept. Things quickly escalate, the Campus Colony is mentioned, and Jadis discloses the truth: The CRM’s computations revealed that the community would never be self-sufficient, and the CRM would be unable to supply enough food to satisfy their growth. The villagers would have starved over time—the gas was, at least in the CRM’s mind, a type of kindness.

As they all waited to see which group would flinch first, allegations of extermination flew, causing Jadis to explain that CRM modeling had indicated that Omaha, Portland, and Campus Colony would never be totally self-sustaining, resulting in a horrific famine. “What we did to your house was kindness,” she reasoned. As time passed, walkers arrived, Mason fled, Percy pursued, and Huck sent two CRM soldiers to defend the children. She got as many as she could.

Percy was shot in the back of the head, ending Ted Sutherland’s reign as the series’ standout. The Bennett sisters left with Felix during a moment of will-she-won’t-she suspense over whether Hope would revenge her sister’s boyfriend’s murder by killing Mason, and when walkers began eyeing Major General Beale’s kid like a menu item, distracting Jadis, Huck made her own escape.

Huck remains in the background, aiming her rifle towards Jadis. The warrant officer gives Huck a “5-, 10-minute head start” if he saves her life, and while Mason cries for aid and Jadis intervenes to rescue him, Huck departs in a vehicle. Hope, Iris, and Felix arrive at the meet, but Leo isn’t there—his vehicle has a flat tire, and Felix enters rescue mode. They remain behind or cross paths with Silas and Elton, and they all share a wonderful group embrace before comforting a tearful Iris.

After all of that, Jadis communicated to Major General Beale via walkie-talkie that the Portland schedule would have to be accelerated. (Is anybody else wondering whether, since we haven’t seen him yet, he’ll turn out to be someone we know? Rick couldn’t be amnesiac, could he? Meanwhile, when Felix left Hope and Iris to assist the scientists in repairing a flat tire — where is apocalyptic AAA when you need it? — the siblings reconnected with Elton and Silas, and they all had a vast, sorrowful group embrace over Percy

Dennis was still alive when Huck got to the culling station. But, based on the tears she later wept, I’m guessing he didn’t survive much longer. Perhaps the youngsters should have done more antibiotics distribution and less group embracing. When the quartet broke away from their hug, their sadness over Portland’s impending fate was cut short by a call from Huck, who seemed to have discovered the gas at the culling station.