From The Outpost Season 4 Episode 6

The Outpost Season 4 Episode 7 sees Luna and Talon taking a step further in figuring out the mysteries. So does Janzo on his side but it seems like one mistake may cost him big time. Recently on the show, Luna and Janzo had to form an unlikely alliance. But it kind of paid off for both sides. At the end of the day, they both were never gonna work great together and changed partners. While Luna found solace in Garrett, Janzo turned to Ren who was battling demons of her own with a request addressed by Nedra.

Nedra wanted black blood from Ren and this may mean parting ways with Janzo. On the other side, it seems like Tobin and Felista are not looking to back away. But it’s Zed who ain’t losing hop over them. As Tobin and Felista march their way to the gods, Zed may follow them. But at the same time, he is asked to retrieve information from Janzo. Also, Ren had solved the mysteries behind the pods that Luna and Janzo discovered. What is inside it? Let’s find out.

Previously on The Outpost, we opened up with Baron Tobin and Felista taking Zed and Talon to the capital. Despite Zed trying to change Tobin and Felista’s minds about the path, they don’t listen. Felista on the other hand asks him to show some trust.  While the goddess reawakens her sister, Ren is asked to come back and fulfill her duties and after several denials, she picks up the job. Luna breaks into the outpost and comes across Janzo. Joining hands together they come across a mysterious place filled with pods and light around them. 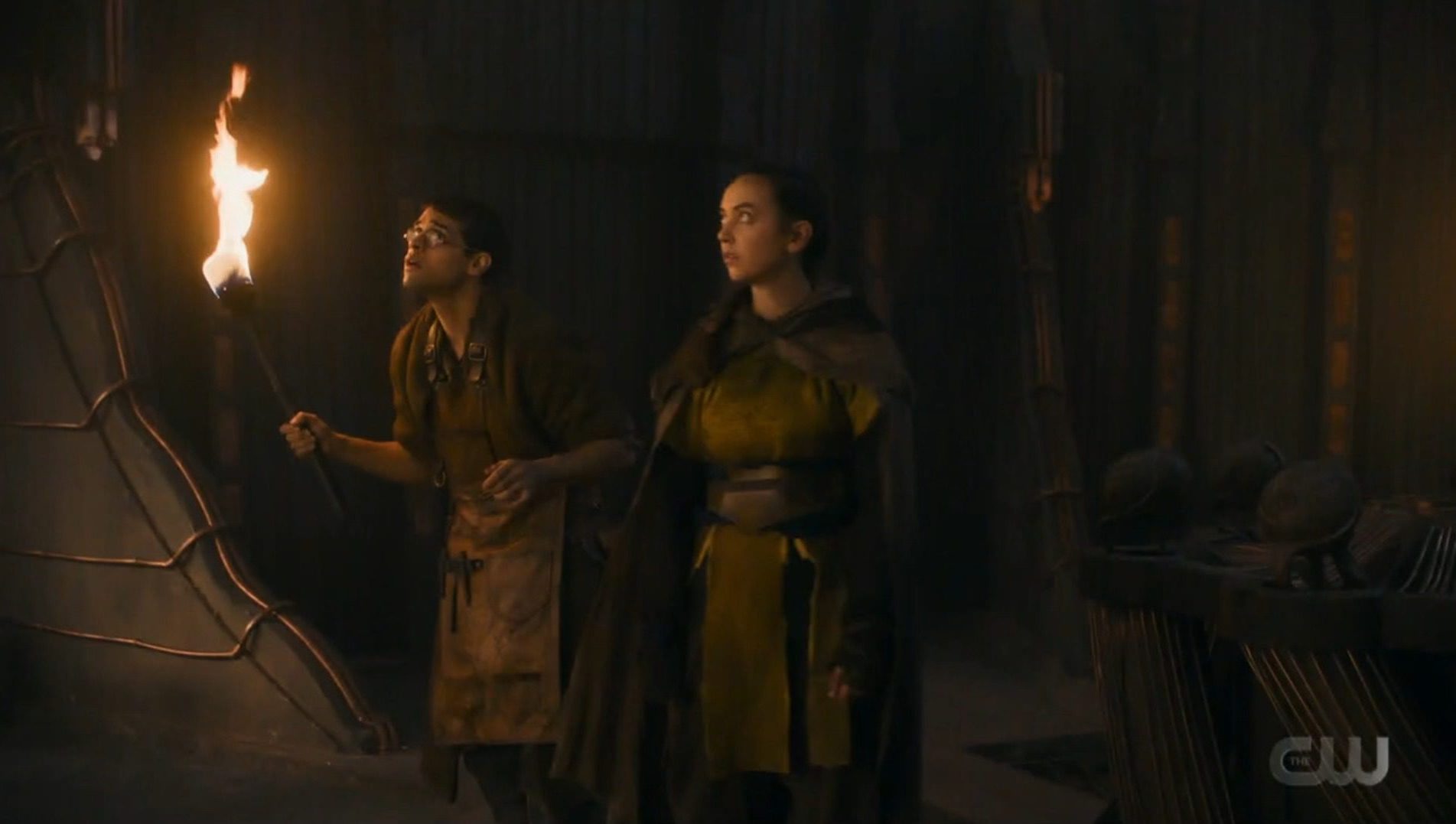 From The Outpost Season 4 Episode 7 Featuring Luna and Janzo

The duo of Luna and Janzo starts figuring out what the place is about. Ren is asked to repopulate black blood. When Janzo is of no use, Luna opts to free Garrett and take his help instead. Nedra’s request for black blood leads Ren to Janzo. He finds himself heartbroken but at the same time, Ren helps him with one of the pieces of the puzzle they found at that place. While they work this out, Luna and Garrett try to rescue Talon. In the process, Tobin is still alarmed and chases them. Zed and Talon fly away. Tobin anyway lets them go and gives away his ring to Garrett hoping they would return with it.

Meanwhile, Janzo and Ren rescue the pod. What they find inside is a strange creature. Zed wants to rescue Tobin and Felista as well despite their urge to continue the quest. The group on the other hand suggests he should go but instead retrieve information from Janzo. Luna tells them about the sanctuary that resonates with the place where she once lived. 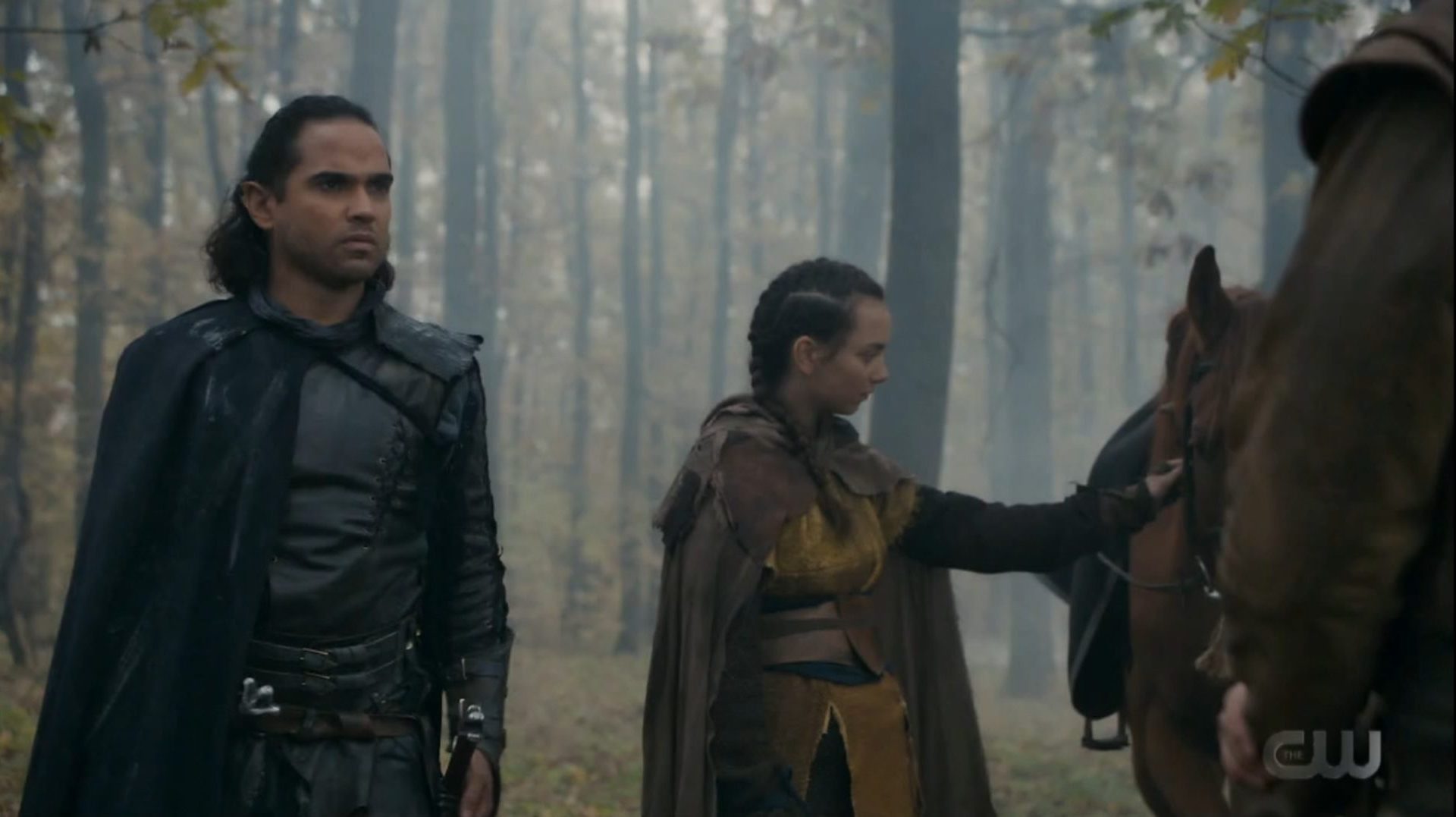 From The Outpost Season 4 Episode 6 Featuring Luna and Zed

Towards the ending of the episode, Ren musters up the courage to tell Nedra about her and Janzo. Tobin, Felista reach the capital to see everyone dead and only the voice of the goddess present. He orders the army to fall back and goes on the mission with Felista alone following the goddess. Meanwhile, Luna and Talon do reach the Sanctuary only to see death everywhere. The episode closes with the gods telling Felista and Tobin their future plans.

The Outpost Season 4 Episode 7 is titled, “The Power of the Masters”. The official synopsis of the episode says we will Talon and Luna are on the hunt to look for the ancient key. So to make it a little easier, they seek help from an old friend. Who would it be? Well, it would be an interesting one for sure. Tobin and Felista have reunited with the gods. As they mentioned they have plans, so both of them will be part of this extraordinary meeting the gods might be holding. Mishaps of Wren and Janzo cause Garret and Zed to hunt.