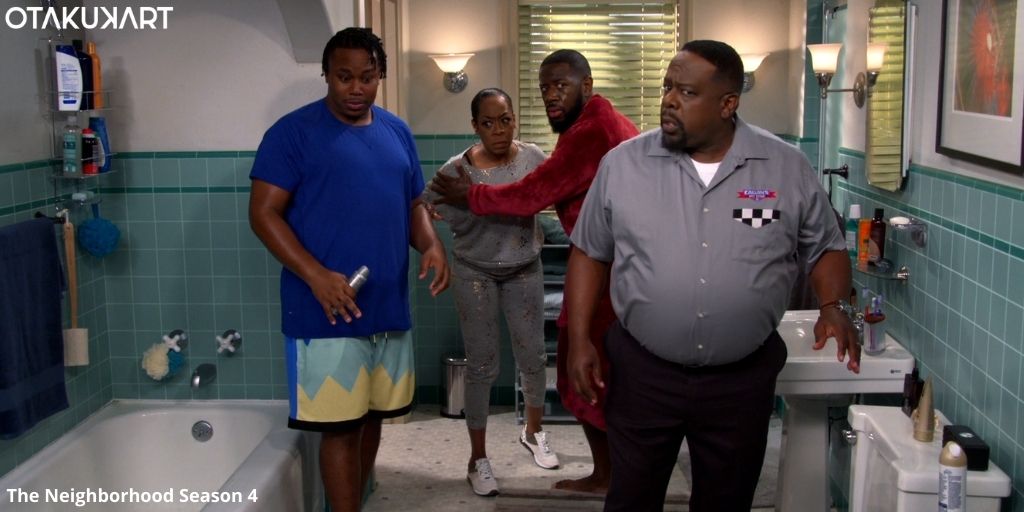 The fans and viewers are quite eager to find out what will happen next on The Neighborhood Season 4 Episode 13. While the previous episode gave us a look at our characters dealing with an earthquake in their own ways. Talking about the Johnsons, Dave, Gemma, and their son Grover had the first time experiencing an earthquake. On the contrary, the Butlers have been used to the mild ones since their time in California.

However, they too got affected by it when they had to move in with their sons. In addition to that, Tina saw this as an opportunity to remodel their house and upgrade it heavily. Although, Calvin was not in favor of this choice and decided to go in the opposite direction. Meanwhile, Malcolm and Marty had to compromise their personal space and privacy when their parents moved in with them. On the other hand, Dave was too frightened from the earthquake and went overboard with the preparations if another one comes.

The comedy series has managed to garner quite a fair amount of viewership around the world since it first kicked off on 1st October 2018. Additionally, the ensemble cast of the show has also added to the success significantly. Although, the fans are now waiting to watch The Neighborhood Season 4 Episode 13. But before talking about that, let us take a quick recap of the previous episode first.

Episode 12 of The Neighborhood Season 4 titled “Welcome To The Big One” dropped on 24th January 2022. The episode began with a sudden earthquake in the neighborhood that shocked Dave and his family. Although Dave was the most frightened of them all as he came out running naked with a bag full of essentials. On the other hand, Calvin and Tina were all calm and relaxed as they walked out of their house with a coffee to see who would run out naked. Furthermore, they told the Johnsons that it was a normal thing for them and any earthquake below 5.8 didn’t even bother Malcolm and Marty enough to wake them up.

However, Calvin and Tina’s house did suffer quite a lot from the shaking and got damaged. Seeing the perfect opportunity, Tina called in the architect named Jackie to have a look at the house and start remodeling. While Calvin tried to convince Tina against it as he liked the house the way it was, still Tina didn’t listen. As a result, they had to move out for a few days for the renovations. So they moved in with Malcolm and Marty. Moreover, Malcolm was the one who had to give his bedroom to his parents. On the other side, Dave was spending money on unnecessary things like generators, gas masks, and more to prepare beforehand for any natural calamity.

But it all started getting a bit extreme when Grover got too scared to sleep in the house. Therefore, Dave came back to his senses after a conversation with Gemma and talked to Grover, reducing his fear. Meanwhile, Calvin fired Jackie seeing that the construction was too much. Additionally, he didn’t want to throw away the memories due to the remodeling. But Tina convinced him that they needed to upgrade and move on and rehired Jackie to finish the work. However, in the end, we saw that the family had managed to share the space with each other efficiently as Calvin and Tina’s stay was extended for several weeks.

Also Read: Young Sheldon Season 5 Episode 13: Will Sheldon Get Along With His Dorm Neighbors?

“The Neighborhood Season 4 Episode 13 will release on 28th February 2022 at 8 pm ET on CBS.” However, the network has not confirmed a title for the episode as of now. Moreover, as the date suggests, the show will be taking a long halt for over a month before it resumes again. So stay tuned till then for any further updates.

How To Watch The Neighborhood Season 4? Streaming Details

“The Neighborhood Season 4 airs on CBS at 8 pm ET every Monday in the United States.” Furthermore, the latest episodes also stream on Paramount+. Additionally, the viewers can head to Youtube TV to watch the show. Meanwhile, the show is available to watch on Amazon Prime Video as well.

Also Read: How I Met Your Father Season 1 Episode 4: Has Sophie Finally Found Her Soulmate?