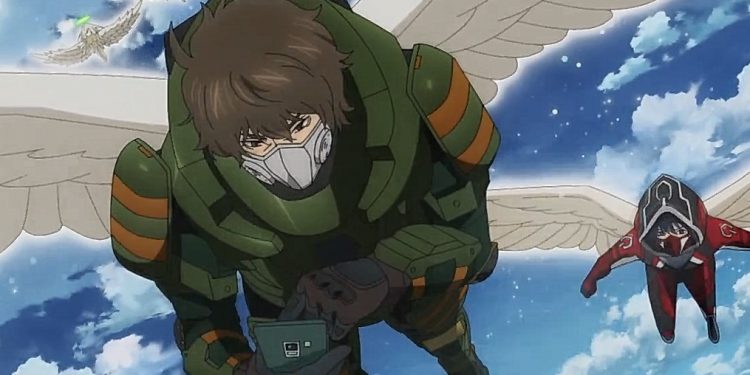 Platinum End Episode 10 reveals the new God Candidate that tried to use Nagamitsu’s Legendary Sword to cut a man. The guy begged for his life, asking the God Candidate why he wanted to kill him. But the God Candidate reveals that he would use Arrow to shoot the man who decided to tell everything he knows. In Platinum End’s latest episode, Mukaido and the others arrive at their destination, and Beret explains how things will work. Nasse meets with Mirai and wonders what he is thinking about.

They know that they can sit now since Metropoliman is still injured, and they won’t face any trouble until Metro recovers. But they still have to find out Metro’s true identity. Mirai feels like he knows the park around the hotel he visited with his family in the past. Saki enters Ravel’s roo, who shows her Celestial Tomes. He reveals that the Celestial Tome holds memories of God and Angel. A single drop can fill more than a thousand books with information; Ravel wishes Saki gets her Wings soon like Mirai.

He knows that he has to show his loyalty to God and get promoted to the higher rank to bestow Saki with Wings. Saki thanks Ravel and decides to find another room to wear her suit since Mukaido finished it. Mukaido and Mirai show each other where they will be, and Saki arrives wearing a new suit. She asks them what they think, and Mukaido compliments her, but Mirrai is speechless. Nasse and Bereat arrive and says that Saki looks cute. Ravel thinks that the suit is too tight; it exposes everything.

Mikaido reveals that the suit is a Stealth Shield-Style and explains its operation. He asks Ravel and Murai if they have a problem, and Saki decides to use that suit during the battle. Nasse spot something in the sky and warns the team. Beret reveals that it is Red Arrow. Mirai wanted to block it, and Mukaido revealed his Red Arrow. Beret realizes that when Red Arrow returns to its owners, one of the people shot by God Candidate has died. They know that Mukaido has shot 14 people, which means he is left with 13 people.

Mukaido and Mirai head out wearing suits to confront the enemy. On their way, Mukaido calls his family to know if they are safe. Mirai wonders if it is Metropoliman. They arrive at Mukaido’s home, and he jumps in after breaking the window while calling Aya and Nanaka. Mirai remains at the entrance to face the pink-haired guy who killed the 14th man. The pink-haired guy uses his blade against Mirai. He is impressed that he fights with God Candidate. He teleports to the park and tells the boss that the bait is set and the God Candidate will show up.

Aya and Nanako are taken hostage and locked inside the barrier. A flashback of Hajime Osokami was shown and how he was treated as the ugliest and poorest man. But one day, he finds his wife killed and decides to become God Candidate to bring his wife back. No one loved him like his wife and decided to kill become God; then, he would revive his wife. He meets with the Angel and reveals that she wants to become handsome.

Platinum End Episode 10 will be released on 10 December 2021. Metropoliman helped, and Mukaido decided to fight with Metro. Mirai decides to join the battle and orders, Ravel to take care of Saki. When they leave, Saki gets worried that she is left behind, and she wishes she could help. She thinks they might not come back since fighting with Metro can take three days. Let’s look at Platinum End Episode 10 official details.